New York City’s lawsuit for climate damages raises the prospect that oil companies may have to pay for rising sea levels and extreme weather. 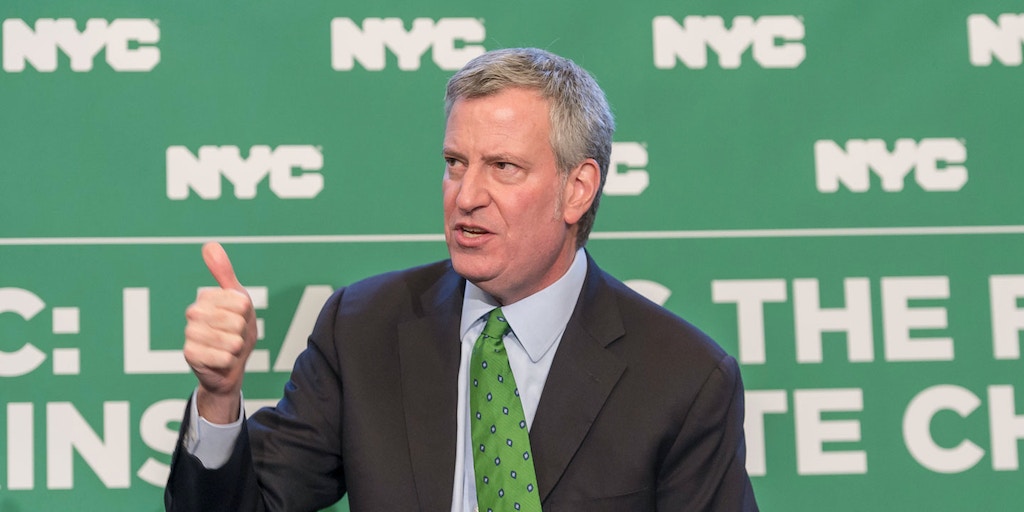 Mayor Bill de Blasio is seen at a press conference on NYC’s plan to divest it’s pension system holdings of petroleum industry stock as a means of combating climate change at the Manhattan Youth Center in New York, NY, USA on January 10, 2018.

Five years ago, when 350.org helped kick off the global fossil fuel divestment movement, one of the slogans the team came up with was “We > Fossil Fuels.”

The T-shirts and stickers were nice, but I have to admit that I never really felt it. Bigger than fossil fuels? With their bottomless budgets? Their endless capacity to blanket the airwaves and bankroll political parties? The slogan always made me kind of sad.

Well, yesterday in New York City, listening to Mayor Bill de Blasio announce that the city had just filed a lawsuit against five oil majors and intended to divest $5 billion from fossil fuel companies, I actually felt it. After being outgunned by the power and wealth of this industry for so many years, the balance of power seemed to physically tilt. It’s still not equal — not by a long shot — but something big changed nonetheless. Regular humans may not be more powerful than the fossil fuel companies now — but we might be soon.

Within minutes of de Blasio’s announcement going public, activists in London started tweeting at their mayor to step up in equally bold fashion. And while the press conference was still streaming live, several of us started to get emails from city councillors in other cities around the world, promising to initiate a similar process in their communities.

Such is the power of an action emanating from a center as symbolically important as New York City: What felt politically impossible yesterday suddenly seems possible, and the dominos start instantly falling.

It’s also extremely significant that the divestment and lawsuit were announced in tandem — because they have the potential to reinforce one another in a kind of virtuous market cycle. Part of the reason why fossil fuel divestment has picked up so much momentum over the past two years is that fossil fuel stocks have been performing badly. This is mainly because the price of oil has been depressed, but it is also because of market uncertainty created by the increasingly powerful climate and indigenous rights movements, and the signing of the Paris climate agreement.

All of this has raised the question of whether fossil fuel companies are really going to be able to get their pipelines and other infrastructure built, given the strength of the opposition. And they have also raised the question of whether these companies will be able dig up the huge oil, gas, and coal reserves that are currently factored into their stock prices — or are these are going to become stranded assets? Right now, we don’t know the answers to these questions, and that uncertainty can give many smart investors pause.

(The Trump administration, by ditching the Paris Agreement and opening up vast new swaths of territory for exploration, has been trying frantically to reassure the markets by sending the opposite message — that it’s back to dirty business as usual.)

Now, with New York City’s lawsuit for climate damages, the market is confronting the prospect of a cascade of similar legal actions — cities, towns, and countries all suing the industry for billions or even (combined) trillions of dollars in damages caused by sea-level rise and extreme weather events. The more suits that get filed, the more the market will have to factor in the possibility of fossil fuel companies having to pay out huge settlements in the near to medium term, much as the tobacco companies were forced to in past decades.

As that threat becomes more credible, with more players taking New York City’s lead, the investor case for dumping these stocks as overly high risk will be strengthened, thereby lending a potent new tool to the fossil fuel divestment movement. A virtuous cycle. Oh, and the more we are able to hit the industry in the pocketbook, the less likely costly new drilling and pipeline projects will be to go ahead, no matter how many precious national parks and pristine coastlines the Trump administration attempts to desecrate. If the economics don’t make sense, the drilling simply won’t advance.

That’s why New York’s actions are so significant, not just in New York or the United States, but globally. (It’s also why I got so cranky with the New York Times for treating it like a minor municipal event, buried on page 23.)

Yesterday was a big, good day for the planet – and we needed one of those.

Because we had been part of kick-starting the divestment movement, Bill McKibben and I were invited to speak at Mayor de Blasio’s press conference. Here are my notes from what I said there.