China’s Wanhua Chemical has joined the “American” Chemistry Council, and its membership dues will help the ACC influence American elections. 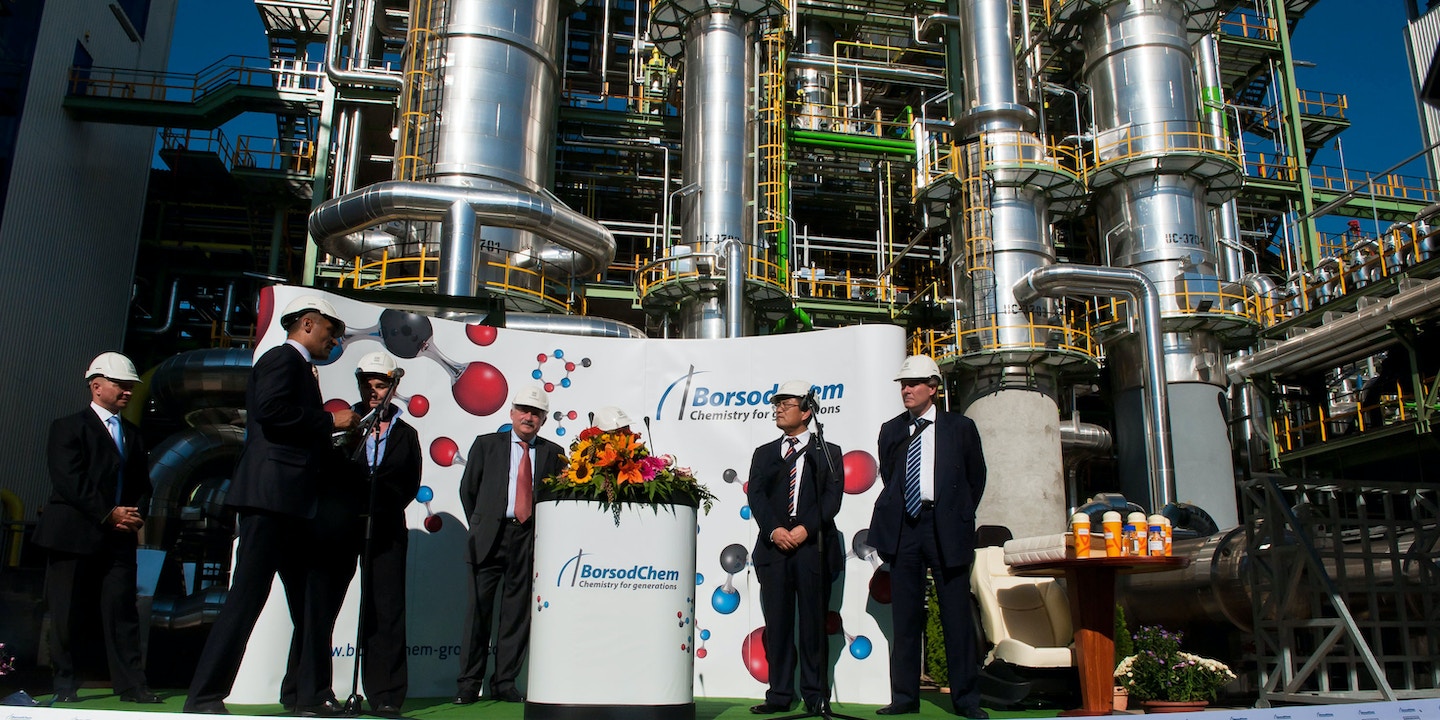 Wanhua Chemical, a $10 billion chemical company controlled by the Chinese government, now has an avenue to influence American elections.

On Monday, Wanhua joined the American Chemistry Council, a lobby organization for chemical manufacturers that is unusually aggressive in intervening in U.S. politics.

The ACC is a prominent recipient of so-called dark money — that is, unlimited amounts of cash from corporations or individuals the origins of which are only disclosed to the IRS, not the public. During the 2012, 2014, and 2016 election cycles, the ACC took this dark money and spent over $40 million of it on contributions to super PACs, lobbying, and direct expenditures. (Additional money flowed directly to candidates via the ACC’s political action committee.)

For example, in 2012 the ACC was the largest single donor funding last-minute ads attempting to save former Rep. Eric Cantor, R-Va., then-House Majority Leader, during his losing primary campaign. The ACC donated $50,000 to a super PAC supporting the 2014 campaign of GOP Sen. David Vitter of Louisiana for the state’s governorship. And while lobbying to revamp federal chemical safety standards in 2015, the ACC simultaneously aired advertisements in support of key legislators who were then crafting an industry-friendly version of the legislation.

Wanhua Chemical was founded as Yantai Wanhua Polyurethane Co. in 1998. Though the firm underwent a public offering about two years later, the ultimate controlling shareholder of the firm is a division of the Assets Supervision and Administration Commission of China, the government entity that oversees state-owned enterprises.

Despite the nationalistic name of the organization, the ACC announced that Wanhua would join the group as a regular dues-paying member. Other dues-paying members of the ACC include BASF, Dow Chemical, Huntsman Corp., and Shell Chemical.

Wanhua and the ACC did not respond to requests for comment.

The 2010 Supreme Court Citizens United ruling and related decisions made it possible for corporate trade associations like the ACC — known as nonprofit 501(c)(6) corporations — to spend as much as they want directly advocating for or against candidates for office “so long as that is not its primary activity,” the IRS says.

This in turn made such organizations an ideal conduit for foreign money to influence U.S. races.

It is formally illegal for foreign nationals — which includes foreign individuals, corporations, and governments —  to spend any money attempting to influence U.S. elections.

Therefore, any contributions the ACC accepts from a foreign corporation like Wanhua must theoretically go to an account separate from that which the ACC uses for political spending. But whether this actually happens is extremely difficult for the public to find out, and even if the ACC is following the law, it would be essentially irrelevant.

“I’m sure ACC will claim that any foreign funds it receives will be segregated from the money used for elections, but how will we know?” asks Brendan Fischer, a campaign finance counsel with the Campaign Legal Center, which advocates for stricter enforcement of campaign finance law. “And in any case, money is fungible, so the influx of Wanhua funds could free up other ACC resources for political activity.”

“This is one of those situations where the scandal is what is legal,” continued Fisher. “The FEC will almost certainly accept ACC’s claim that it does not use foreign money to funds its ads, and because the FEC also allows dark money nonprofits like ACC to ignore disclosure requirements, neither the FEC nor the public will have any way of proving otherwise.”

Secondly, and even more strangely, even a wholly owned subsidiary of a foreign company is considered American if incorporated in the U.S. — and therefore, can legally spend as much as it wants on American elections as long as it follows complicated, difficult-to-enforce regulations. “Even if Wanhua Chemical directly funded political ads,” says Fisher, “it could probably get away with it if the money came from its U.S. operations and was formally directed by U.S. citizens.”

The ACC is by no means the only trade association to take advantage of Citizens United: After the decision came down, a number of organizations in the U.S. with foreign-owned members began spending corporate money on elections. The U.S. Chamber of Commerce, another 501(c)(6) with foreign corporate members, now routinely spends directly on congressional elections. Trade associations are in some ways the perfect vehicles for foreign money: Not only do they not have to disclose donors, most already maintain sophisticated lobbying operations, so that campaign cash is targeted in a way with the most political impact.

The American Petroleum Institute is another trade group with foreign members that spend big on U.S. elections. Wanhua appears to be the second partially state-owned corporation paying dues to ACC. SABIC, the majority state-owned Saudi chemical company, is also a dues-paying member.

In addition to Fisher, other campaign legal scholars noted that Wanhua’s decision to join the ACC represents another worrying example of creeping foreign influence.

“The ACC’s spending is likely merely one example of foreign money that has or will be spent to influence who we elect as our representatives,” says Jessica Levinson, an ethics expert and professor at Loyola Law School in Los Angeles.

Rick Hasen, professor of Law and Political Science at the University of California, Irvine, says he’s also concerned about the flow of foreign cash through untraceable “c(4)s, c(6)’s and LLCs which contribute to those entities and super PACs.” And he’s unsure the Federal Election Commission “disclosure rules and IRS investigations can deal with the issue of foreign money in U.S. election.”

The significance of Wanhua contributing dark money to the ACC can be seen in a 2016 Intercept series on foreign influence on U.S. elections. The Intercept revealed that a Chinese-owned real estate company had directly donated to the super PAC supporting Jeb Bush’s presidential campaign. The decision to donate was made by Chinese nationals living abroad using a California-based subsidiary of their company. The election attorney advising the Bush super PAC even wrote a legal memo outlining how it was permissible to receive a donation from a foreign-owned firm.

However, The Intercept was only able to track the money flow because donations to super PACs must be publicly disclosed. If the Chinese company had been sophisticated enough to give the cash to Bush’s related dark money outfit, no one would have ever known.

Three Democratic FEC commissioners cited The Intercept’s series in a move to strengthen rules governing foreign corporate cash in elections. But any effort to move forward was thwarted by the three Republican members of the commission. Most major enforcement actions do not advance at the FEC because of the agency’s structure — no more than three of the six commissioners can be from the same party — and because GOP commissioners often vote as a block.

This campaign cycle, the ACC is again airing campaign-style advertisements in key states, including the following spot for Sen. Dean Heller, R-Nev., who is facing a competitive reelection this year: