“We Know Where Your Kids Live”: How John Bolton Once Threatened an International Official

“John Bolton is a bully,” said José Bustani, a retired Brazilian diplomat. “I don’t know how people can work for him.” 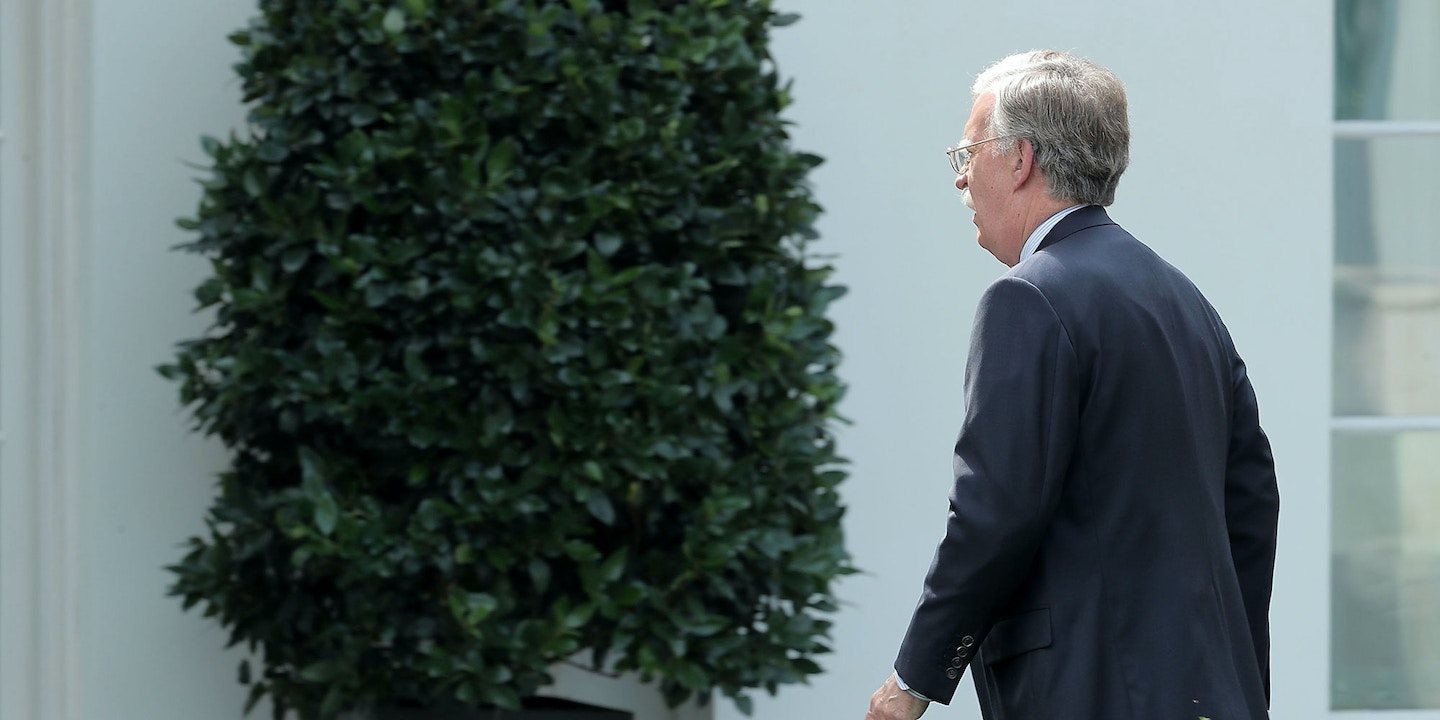 Who better to advise the bully-in-chief, Donald Trump, on when to make war and kill people than another bully? It’s difficult, after all, to avoid the label — that of a bully — when thinking of John Bolton, the former Bush administration official-turned-Fox News pundit who Trump recently picked as his national security adviser.

“John Bolton is a bully,” José Bustani, the retired Brazilian diplomat and former head of the Organization for the Prohibition of Chemical Weapons, told me when I reached him by phone in Paris earlier this month.

There are a number of people who claim to have been bullied or intimidated by Bolton — including Bustani. The latter’s criticisms of the famously mustachioed hawk have been public for many years now, but some of the details of his tense encounter with Bolton at the OPCW have never been reported before in English.

In early 2002, a year before the invasion of Iraq, the Bush administration was putting intense pressure on Bustani to quit as director-general of the OPCW — despite the fact that he had been unanimously re-elected to head the 145-nation body just two years earlier. His transgression? Negotiating with Saddam Hussein’s Iraq to allow OPCW weapons inspectors to make unannounced visits to that country — thereby undermining Washington’s rationale for regime change.

In 2001, then-Secretary of State Colin Powell had penned a letter to Bustani, thanking him for his “very impressive” work. By March 2002, however, Bolton — then serving as under secretary of state for Arms Control and International Security Affairs — arrived in person at the OPCW headquarters in the Hague to issue a warning to the organization’s chief. And, according to Bustani, Bolton didn’t mince words. “Cheney wants you out,” Bustani recalled Bolton saying, referring to the then-vice president of the United States. “We can’t accept your management style.”

Bolton continued, according to Bustani’s recollections: “You have 24 hours to leave the organization, and if you don’t comply with this decision by Washington, we have ways to retaliate against you.”

There was a pause.

Bustani told me he was taken aback but refused to back down. “My family is aware of the situation, and we are prepared to live with the consequences of my decision,” he replied.

After hearing Bustani’s description of the encounter, I reached out to his son-in-law, Stewart Wood, a British politician and former adviser to Prime Minister Gordon Brown. Wood told me that he vividly remembers Bustani telling him about Bolton’s implicit threat to their family immediately after the meeting in the Hague. “It instantly became an internal family meme,” Wood recalled. Two former OPCW colleagues of Bustani, Bob Rigg and Mikhail Berdennikov, have also since confirmed via email that they remember their then-boss telling them at the time about Bolton’s not-so-subtle remark about his kids.

Another former OPCW official, then-Special Assistant to the Director-General for External Relations Gordon Vachon, who was in the room for the meeting with Bolton, has confirmed that the Bush administration official implicitly threatened Bustani. The OPCW chief “could go quietly, with little fuss and restraint on all sides and ‘without dragging your name through the mud,’” Vachon recalled Bolton saying, in an email to The Intercept. “I cannot say from memory that I heard Mr. Bolton mention DG Bustani’s children, probably because I was reeling from Mr. Bolton’s thinly-veiled threat to DG Bustani’s reputation.”

I reached out to John Bolton and the White House for a response to these allegations. Rather than issue an outright denial, the White House responded via a press spokesperson that referred me to a section of his 2008 memoir, “Surrender is Not an Option: Defending America at the United Nations,” which deals with Bustani and the OPCW. In the book, Bolton said the U.S. viewed Bustani as a “management disaster” (without mentioning Powell’s praise), but claims to have offered him “a gracious and dignified exit” — if, that is, he went quietly.

To call Bolton’s rhetoric undiplomatic is an understatement. He visited Bustani in his capacity as a top U.S. State Department official, yet his behavior was more thuggish. How on earth can a senior diplomat, representing a democratic government, justify implicitly threatening the children of an international official in order to win a political argument? How is such a person now fit to hold the office of national security adviser — the most senior position in the U.S. government that doesn’t require an election win or Senate confirmation?

“The problem with this man is that he’s so ideological, so brutal; he doesn’t open the door to dialogue,” the former OPCW chief told me on the phone. “I don’t know how people can work for him.” 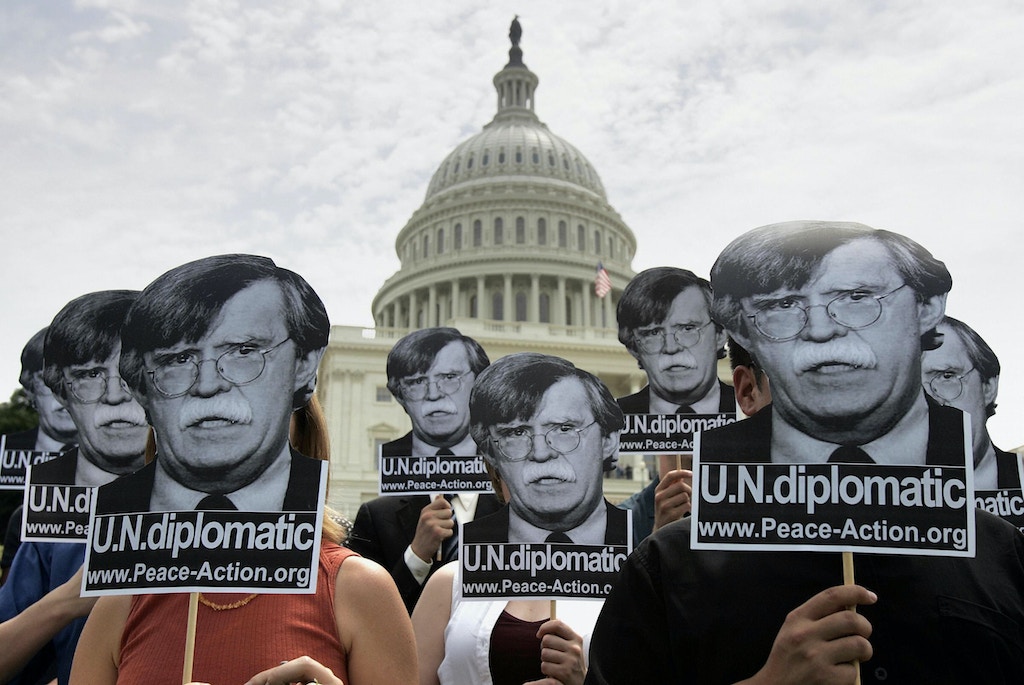 Activists gather on the west side of the Capitol Building on June 7, 2005, in Washington, D.C., to protest the nomination of John Bolton as U.S. ambassador to the United Nations.

Bolton’s history of bullying, in fact, is well-documented. Carl W. Ford Jr, the State Department’s former intelligence chief, called Bolton “a serial abuser” of junior employees and “a quintessential kiss-up, kick-down sort of guy.” Testifying before the Senate in 2005, Ford discussed the case of Christian Westermann, the former chief bioweapons analyst at the State Department who had refused to sign off on a speech accusing Cuba of possessing a secret bioweapons program and had been “berated” by Bolton, who “then tried to have him fired.”

Melody Townsel, a former U.S. Agency for International Development contractor, said she was harassed by the short-tempered Bolton, then a lawyer in the private sector, on a visit to Kyrgyzstan in 1994: “Mr. Bolton proceeded to chase me through the halls of a Russian hotel — throwing things at me, shoving threatening letters under my door and, generally, behaving like a madman,” she later recalled, in a letter to the Senate Foreign Relations Committee.

The big problem is that Bolton — the “madman,” the “serial abuser,” the “bully” — happens to also be pretty effective at getting things done.

According to Time magazine, his former boss Colin Powell privately warned Republican senators in 2005, during the confirmation hearings for Bolton’s controversial nomination as U.S. ambassador to the United Nations, that “he had been troubled by the way Bolton had treated subordinates who did not agree with him.”

Yet the big problem is that Bolton — the “madman,” the “serial abuser,” the “bully” — happens to also be pretty effective at getting things done. This is perhaps what makes him so dangerous. Take the case of Bustani and the OPCW: Bolton succeeded in having the Brazilian removed from his post. Only a few weeks after the U.S. official’s visit to the Hague, the OPCW chief was “pushed out of office” in an extraordinary meeting of the organization’s member countries (and in a decision, incidentally, that an administrative tribunal of the International Labour Organization would later call “unlawful”).

Bolton himself proudly recalled in his memoir how then-Sen. Joe Biden, D-Del., criticized his views while praising his abilities during the 2001 congressional hearings to confirm him as under secretary of state. “My problem with you, over the years, has been, you’re too competent,” Biden remarked, according to Bolton. “I mean, I would rather you be stupid and not very effective.

Now, therefore, is the time to panic; now is the moment to sound the alarm. The bullies have come together. The “ideological” and “brutal” Bolton is about to be given a desk a few feet away from the Oval Office. As national security adviser, he’ll be the first one in the room and the last one out. “Trump is utterly ignorant of the world, prone to making impulsive decisions, and tends to defer to the most forceful voice in the room, especially when it conveys information with confident bluster,” observed Damon Linker in the The Week. “That would give Bolton enormous power to shape policy — which means the power to get the United States to launch big new wars as well as expand the numerous ones we’re already waging across wide swaths of the Middle East, Africa, and South Asia.”

Is it any wonder, then, that Bustani — who did so much to prevent the threat of conflict and the proliferation of chemical weapons before being ousted by Bolton — believes the latter’s appointment as Trump’s national security adviser could spell “disaster” for the world?

Listen to Mehdi Hasan’s interview with José Bustani on the Deconstructed podcast: