Pro-Palestinian activists say they spoke briefly with Booker about their advocacy work before taking a picture with him holding a pro-Palestinian sign. 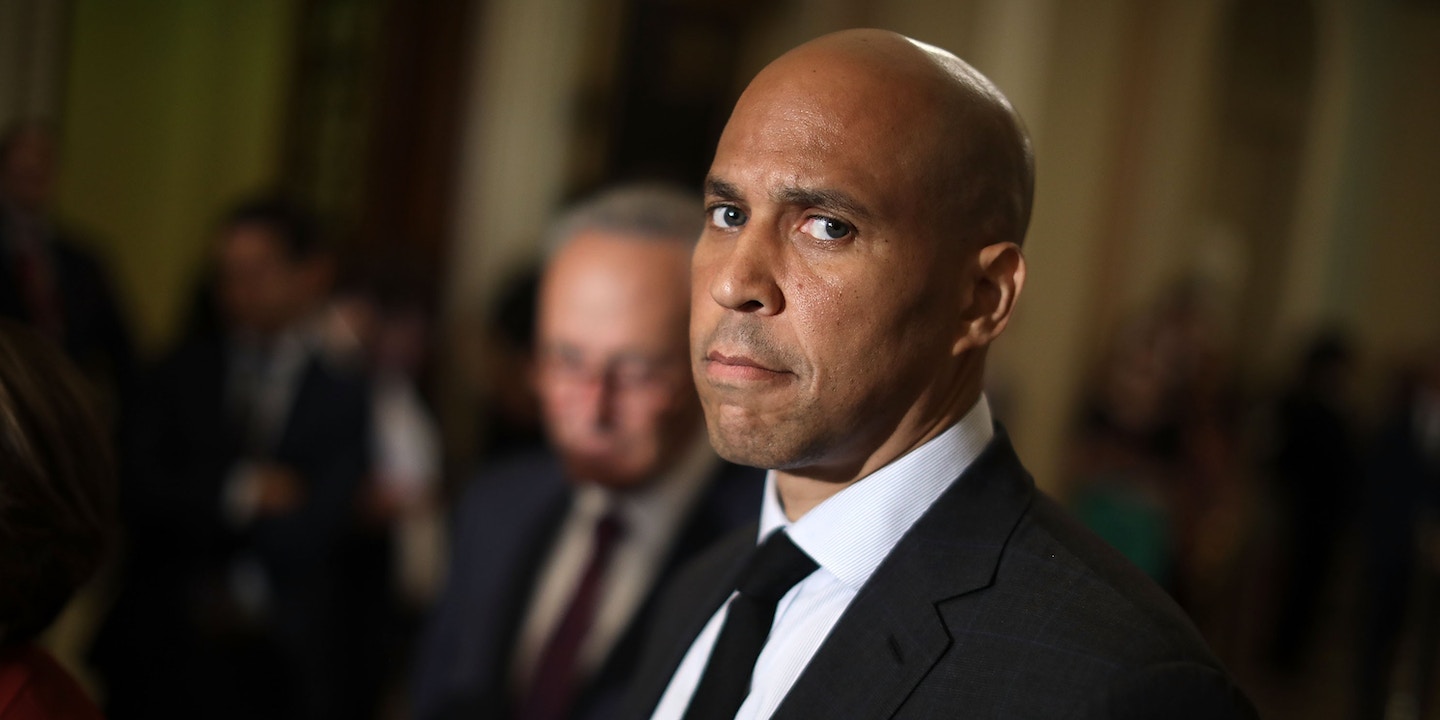 At the Netroots Nation conference in New Orleans this past weekend, which brands itself as “a political convention for American progressive political activists,” the U.S. Campaign for Palestinian Rights attended panels, handed out literature, and advocated for the end of the occupation of Palestine to secure a just future for both Israelis and Palestinians.

As part of that effort, members snapped a photo with Sen. Cory Booker D-N.J., during which he held a sign that clearly read, “From Palestine to Mexico, All the Walls Have Got to Go.”

Excited to be here at Netroots Nation talking with progressives like Sen. Cory Booker about our shared commitment to freedom, justice, and equality for all people. #NN18 pic.twitter.com/ljswLmv32w

The initial response from the left was hopeful, if skeptical. Booker, a presumed 2020 hopeful, has been making concessions to the left since 2016, including a pledge to reject corporate PAC donations, putting a “pause” on fundraising from pharmaceutical companies, and embracing Sanders-style policies like a $15 minimum wage and “Medicare for All.”

Although he has a long history of strident pro-Israel advocacy, this year, Booker declined from speaking publicly at the American Israel Public Affairs Committee, America’s prominent pro-Israeli government lobbying group — although an AIPAC official told The Intercept that conference attendees met with him at his Capitol Hill offices following the event.

It seemed as though Booker’s choice to enthusiastically pose with a pro-Palestine sign might be part and parcel of his move to the left, but within hours, his campaign disavowed the whole thing.

His spokesperson, Jeff Giertz, told the Jewish Telagraphic Agency that Booker was simply snapping photos with fans and that he had no idea what the sign actually read.

“Just before delivering a speech in New Orleans, Senator Booker was approached by dozens of people for photos,” Giertz told JTA. “In one instance, amid the rush, he was posing for a photo and was passed a sign to hold — he didn’t have time to read the sign, and from his cursory glance, he thought it was talking about Mexico and didn’t realize it had anything to do with Israel.”

Giertz went on to defend the wall in question — the separation barrier Israel has erected in the West Bank. “[Booker] hopes for a day when there will be no need for security barriers in the State of Israel, but while active terrorist organizations threaten the safety of the people living in Israel, security barriers are unfortunate but necessary to protect human lives,” he said.

Giertz’s statement echoes the pro-wall rationale used by the Israeli government, but that reasoning ignores the fact that the barrier extends far into Palestinian territory, providing Israel an opportunity to continue to expand settlements. The international human rights community’s position on the wall reflects leftist critiques that are rooted in an objection to Israel’s choice to build on Palestinian land and displace Palestinian people — not an objection to Israel protecting itself. Even former President George W. Bush, no left-winger, was initially quite critical of the barrier. “It is very difficult to develop confidence between the Palestinians and Israel with a wall snaking through the West Bank,” he said. He later backed down on his criticisms when the Israeli government pressed forward.

The documentary “Five Broken Cameras“ demonstrated how this barrier has impacted life in the Palestinian village of Bil’in, and how the Israeli government has responded with force — sometimes lethal — toward nonviolent protests against the barrier.

Booker’s disavowal, then, stung to those on the left who saw the photograph as evidence of progress, even while it assured those whose politics more closely aligns with the State of Israel. It was especially frustrating given how unlikely the excuse seemed in light of the context of the event.

Now, a USCPR statement provided to the Intercept casts doubt on Booker’s claim.

That Palestine is a progressive issue was driven home repeatedly at Netroots Nation this past weekend. From a USCPR panel on progressives on Palestinian rights and caucus on cross-movement work, to the overwhelmingly positive response to our presence there, to Black activists taking the stage and asserting that “if you’re not progressive on Palestine, you’re not progressive” to deafening applause, we saw for ourselves how progressives are increasingly embracing the issue of Palestinian rights,” it reads. “Our elected officials are also increasingly embracing Palestinian rights, as demonstrated by the first-ever bill for Palestinian children’s rights, sponsored by Rep. Betty McCollum (D-MN) and 29 other Democrats. It was in this overwhelmingly supportive environment at Netroots Nation that our contingent had the opportunity to meet Sen. Cory Booker briefly and discuss our work for freedom, justice, and equality for the Palestinian people before posing for a photo with him.

The last sentence of that statement suggests that Booker had spoken to the USCPR members prior to the photo being taken, thus raising some skepticism about his claim that he did not know what the sign said. Also notable is the fact that one of the USCPR members in the photo wore a T-shirt that read: “Palestine is a queer, feminist, refugee, racial justice issue.”

Booker has a long history of pro-Israel advocacy that directly implicates the human rights concerns of Palestinians, and his top contributors between 2013 and 2018 were individuals affiliated with NORPAC, a pro-Israel lobbying group. In 2008, Booker, then the mayor of Newark, New Jersey, coached a group of AIPAC activists in Chicago on recruiting for the pro-Israel cause among the African-American community.

An attendee at that event had asked Booker how to engage with African-American leadership, which he worried was increasingly sympathetic to Palestinians. Booker responded by distancing himself from progressive critics of Israel and citing various conservative black Democrats as role models. Finally, he urged AIPAC to work to build closer relationships with younger African-Americans.

“Jesse Jackson doesn’t speak for me. Al Sharpton doesn’t speak for me,” he said. “This next group of African-Americans are very visionary, very much full of hope, very value-based, as I know them. Harold Fords, Artur Davises, and many other people that AIPAC knows. … It’s critical that you find, that you continue to find, not them when they’re congressmen. You find those black leaders when they’re 22-year-olds at Oxford, when they’re 24-year-olds as a city council president, and you go to them then and  say, ‘Come to Israel, let us start showing you what this is about. That’s a key mission of AIPAC that must continue, which is finding future leaders, young leaders of America.”

In that 2008 speech, Booker went on to critique then-candidate Barack Obama’s controversial pastor, Rev. Jeremiah Wright, who was under fire for criticizing Israel, among other things. Booker posited that Wright was not representative of the African-American community, much as his own friend at the time and spiritual adviser Rabbi Shmuley Boteach was not always representative of Jews — a remark that drew laughs.

“Please, I appeal to Jews all the time, please do not think that … because such and such a black leader gets up there, whether it be Reverend Wright or whomever, and says something stupid, like many leaders, period, do, and spread that around for the entire black community, much as Jews wouldn’t want to be held responsible for everything Shmuley Boteach says.”

As a senator, Booker continued to support the Israeli government, even as it came under intense criticism from the international community. In 2014, as Israel faced scrutiny over its conduct in the war with Gaza where several thousand Palestinians perished, Booker took to the Senate floor to defend its behavior and excluded Israel from any blame for the conflict.

“Let us stand resolute and clear about the true cause of this crisis, and that lies squarely with Hamas, a terrorist organization whose ends do not start and finish with the well-being of the Palestinian people,” he declared. “Right now, we are in a state of crisis, and America’s voice must be resolute: We stand with our ally, we stand with the democratic state of Israel. We stand against terrorism.”

Following the conflict, the lopsidedness of the casualties was made clear. Two thousand one hundred Palestinians perished, a majority of them civilians. Sixty-six Israeli soldiers lost their lives, as well as seven Israeli civilians. The U.S. government supplied Israel with additional arms during the fighting, including grenades and mortar rounds.

Under pressure from Obama and progressive activists, Booker did eventually support the nuclear deal with Iran, a rare break with Israeli leader Benjamin Netanyahu. However, he has failed to make even symbolic gestures toward condemning Israeli human rights abuses of the Palestinians. After Israeli forces killed Palestinian demonstrators in Gaza in April, his office issued no remarks and did not reply to a request for comment from The Intercept — unlike Sens. Bernie Sanders, I-Vt., and Elizabeth Warren, D-Mass., who called on Israeli forces to exercise restraint against peaceful protesters. He also has not signed onto Senate letters urging humanitarian aid for the Gaza Strip and Palestinian refugees.