Trump Gets 100 Countries to Sign On to His U.N. Drug War Plan, Ignoring Changing Thinking on Human Rights and Legalization

Some brutal regimes with draconian drug policies signed on — and a few allies balked at the Trump administration’s retrograde drug war push. 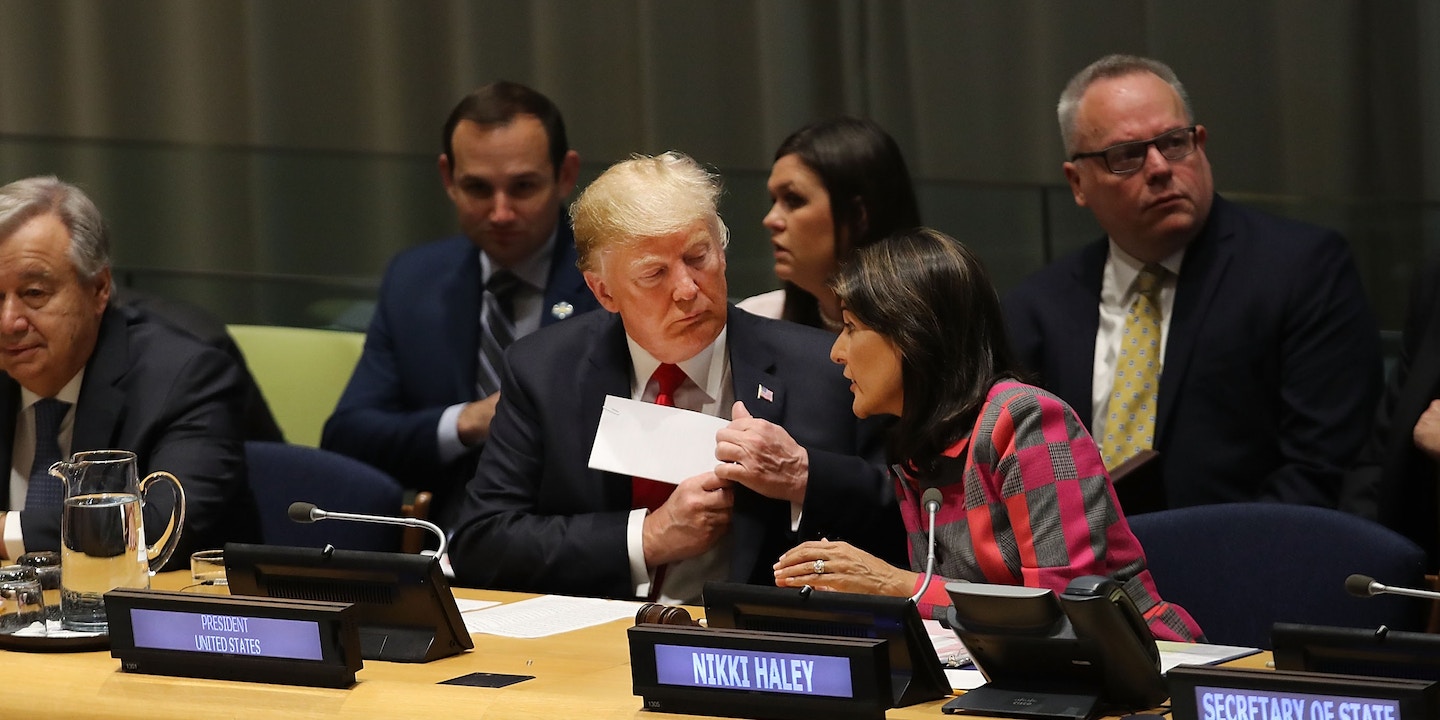 The Trump administration announced last week that it would kick off the United Nations General Assembly with an event inviting member states to join a revamped U.S. war on drugs. On Monday, Donald Trump got his drug meeting — but not quite everyone signed on. Billed as a “Global Call to Action on the World Drug Problem,” the State Department said that 130 countries had agreed to a nonnegotiable text, but missing from that list were a number of key U.S. allies.

For the U.N. member countries, some realpolitik over dealing with the U.S. was involved, but analysts of international affairs and drug policy said that many governments chafed at the way the document and meeting were proposed — even if the U.S.’s powerful position at the world body meant that more than 100 countries signed up anyway.

“The U.S. is trying to lead us backwards now to the failed policies that led us here.”

“I think a lot of delegations, including a lot of delegations that ended up signing, found it entirely offensive that one country would take it upon itself with a few others, pronounce a text as nonnegotiable, and then pressure countries to sign up because they said so,” said John Walsh, director for drug policy and the Andes at the Washington Office on Latin America. Advocates like Walsh expressed concern at the substance of the U.S. program, as well. “The U.S. is trying to lead us backwards now to the failed policies that led us here,” he said.

Some U.S.-allied governments echoed those concerns, albeit in softer terms. Speaking to Norwegian TV, the country’s Foreign Minister Ine Eriksen Soreide said the call had “too little focus on the health side of drug policy,” explaining why Norway had turned it down like all the other Nordic countries. New Zealand’s Prime Minister Jacinda Ardern made similar remarks. Nigeria and Brazil were the largest countries to refrain, and Germany was the biggest in Europe to decline. Others who kept away included Uruguay, which has legal marijuana market, and South Africa, which days ago legalized private use of the drug. (Tens of millions of Americans live in states where marijuana is legal.)

As The Intercept reported last week, the Trump administration assembled a number of hard-line countries, including Russia, China, and Saudi Arabia, as partners before sending out the action plan to all member states. The Philippines — where President Rodrigo Duterte’s drug war has drawn international criticism for its extrajudicial killings and brutality — and Myanmar, whose government stands accused of genocide, were both included on the final list. Israel signed on, but its U.N. delegation did not attend, presumably to make it easier for other countries, such as those Arab nations who eschew formal relations with Israel, to appear.

“I’m thrilled that every country in the room today has agreed to answer our call, and I want to thank each and every one of you for your commitment to this important initiative,” said Trump.

The call, a departure from consensus drug policymaking at the U.N., was crafted around a “four-pronged” strategy — demand and supply reduction, treatment, and international cooperation. A Western diplomat whose government refused to sign on, and who requested anonymity to discuss a sensitive matter involving relations with the U.S., told The Intercept that their delegation resented the lack of consultations over language. The wording, the diplomat said, was reminiscent of that used prior to the General Assembly’s last special session on drugs, in 2016.

The outcome document of that special session, known as UNGASS, was split into seven thematic chapters that addressed some of the same concepts — international cooperation, as well as supply and demand reduction — as those found in Trump’s four prongs. But Trump’s approach does not contain specific progressive measures found in the 2016 document, for instance, a pillar on human rights or alternative development options for those who grow illicit crops, as well as a nod to access to controlled substances. (In many developing countries, the problem for millions suffering from terminal illness is not a surfeit of drugs, but a complete lack of affordable painkillers.) Advocates and U.N. member states who want to change drug policies lamented the absence of these elements in both UNGASS and the new Trump plan.

“Drugs are [being] seen in this as an illegal thing — a problem thing, a crime thing — and in our country we see it as a health thing.”

“Drugs are [being] seen in this as an illegal thing — a problem thing, a crime thing — and in our country we see it as a health thing,” a Dutch official, who asked for anonymity to discuss diplomatic matters, told The Intercept, explaining their country’s decision to forgo Trump’s meeting. “In our country we try to prevent it, and we don’t believe in the way it’s being proposed by this text. We don’t want to criminalize it as it is done in this text.”

Others were more diplomatic. “Sweden shares the concern on the importance of the fight against narcotics, but on this occasion we were unfortunately unable to attend,” said a spokesperson at the country’s U.N. Mission.

Though easier for wealthier countries to spurn, Trump’s call was signed by dozens of smaller countries, ranging from the Comoros and Togo, to the recently renamed eSwatini. Policy advocates had held out hope that Mexico and Canada — in the process of legalizing marijuana nationally — would hold off, but they too were additions to the State Department list.

The practical result for countries that signed on to the U.S. plan still isn’t entirely clear — nor what awaits those that didn’t. Over the last two years, member states have consistently been threatened by U.S. Ambassador Nikki Haley if they don’t act in the U.S.’s perceived interests. “I’m taking names,” she said last year. Last week, previewing Trump’s General Assembly speech, Haley said, “While the U.S. is generous, we are going to be generous to those that share our values, generous to those who want to work with us, and not those that try to stop the United States or say they hate America or are counterproductive to what we’re doing.”

As Walsh, of the Washington Office on Latin America, and three colleagues pointed out this weekend, the U.S. has weapons to punish member states at its disposal — including the annual U.S. drug “certification process,” which evaluates countries’ commitment to fighting drugs, and ongoing trade negotiations. On Monday, Haley offered more clarity on what the U.S. expected. “It wasn’t just a bunch of people getting into a room,” she told reporters at the U.S. Mission, alongside Secretary of State Mike Pompeo and national security adviser John Bolton. Every country that came, she noted, had to sign on, and each would “implement something within their own countries that dealt with how they were going to deal with the supply and demand of drugs.”

“Within the United States, President Trump is leading a massive and effective counterattack against it,” said Haley. “It’s now time for every country to follow our lead.”

Other policy experts said they didn’t believe as much would come from the call. “There’s nothing in the Trump statement, as far as I can see, that negates the 2016 UNGASS outcome document for signatories,” said John Collins, executive director at the London School of Economics International Drug Policy Unit. “I suspect there may simply be a lack of strategy or even understanding within the administration of the implications of their ‘four-pronged strategy.’”

“Attempts to eradicate drug supply and use through prohibition-based repressive measures against people who use drugs have proved expensive and counterproductive for more than 50 years.”

In a statement, the Global Commission on Drug Policy said the call to action “signals the continuation of inefficient, costly and harmful policies.” On the same day as Trump’s event, the Global Commission released a report outlining regulation as a responsible means of controlling narcotics. One of the panel’s members is former Colombian President César Gaviria, who led the country through the deadliest years in its modern history during the early 1990s, when civil war and drug-fueled violence saw homicide rates skyrocket.

“Attempts to eradicate drug supply and use through prohibition-based repressive measures against people who use drugs have proved expensive and counterproductive for more than 50 years,” said the Commission. “The U.S. government, which tried and abandoned alcohol prohibition, and now faces an unprecedented opioid crisis, should know better than anyone.”

In New York, Trump lauded Colombia’s new right-wing president, Ivan Duque, who Trump said “campaigned on an anti-drug platform, and won a very, very impressive victory. Congratulations. We look forward to partnering with his new administration to eradicate coca production in his country.” According to a list provided by the U.S. mission, Colombia was the very first country to sign Trump’s call.

Top photo: President Trump attends a meeting on the global drug problem at the United Nations with UN Ambassador Nikki Haley, ahead of the official opening of the 73rd United Nations General Assembly on Sept. 24, 2018 in New York City.