One of Barack Obama’s first decisions after being elected president continued to haunt the country as Brett Kavanaugh was sworn in. 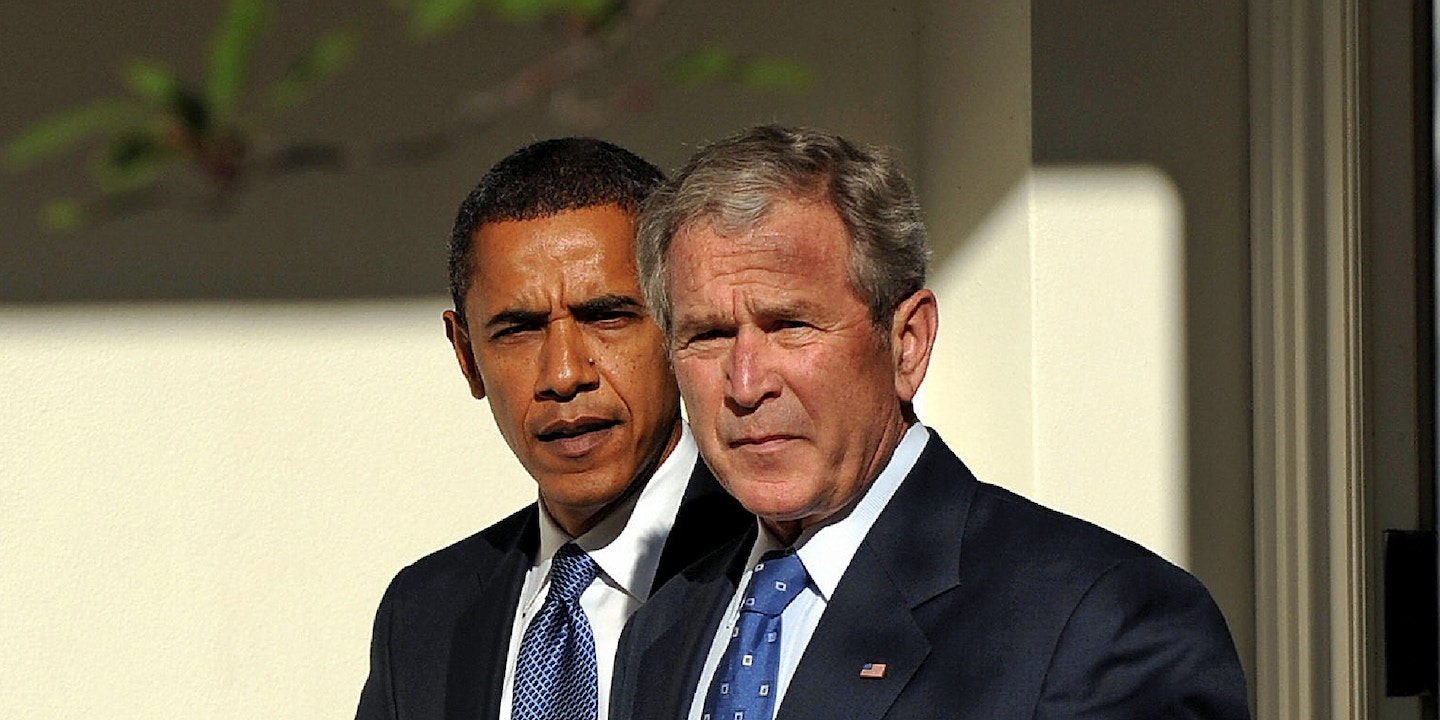 One of Barack Obama’s first decisions after being elected president continued to haunt the country over the weekend, as Brett Kavanaugh was sworn in as the fifth hard-line conservative on the Supreme Court.

In January 2009, George W. Bush left office with an abysmal 22 percent approval rating, the lowest ever recorded. Almost everyone with anything to do with his administration was considered politically toxic.

With full Democratic control of the federal government, calls came for an investigation into the scandals of the Bush administration, including torture, mass surveillance, and war profiteering. While some called for criminal prosecutions, others wanted hearings or an independent investigation that would — at minimum — put into the public record the details of who did what and when. At the least, the argument went, Democrats could ensure that the GOP had to wear the Bush administration for years; that the officials involved in wrongdoing would be written out of polite society; and that future administrations would not revert to those practices.

Obama refused. “We need to look forward as opposed to looking backwards,” he said famously on January 11, 2009, days before he took office.

Had he looked forward far enough, he would have seen one of the chief boosters of the torture program elevated to CIA director, and a Bush administration attorney with complicity in a wide array of its most controversial programs lifted up to the U.S. Supreme Court.

Kavanaugh’s rise to the Supreme Court is the result of elite institutional failure. The judge was sworn in by Chief Justice John Roberts on Saturday evening, even as demonstrators banged on the doors of the court. “The road that led us here has been bitter, angry, and partisan,” said Minority Leader Sen. Chuck Schumer on the Senate floor after the vote, “steeped in hypocrisy and hyperbole and resentment and outrage.”

Three allegations of sexual assault — the first was broken by The Intercept — and and FBI investigation weren’t enough to sink Kavanaugh. Nor were indications of perjurious testimony — in part because a trove of documents relating to Kavanaugh’s time with the Bush administration that is currently being analyzed by the National Archives, including emails and memos about surveillance, torture, and Kavanaugh’s involvement with a hacking scandal, won’t be released until the end of October.

At least 100,000 documents relating to Kavanaugh’s involvement in developing policy during his time as associate counsel to the president from 2001 to 2003, and his time as staff secretary from 2003 to 2006, have been withheld by the Trump administration, citing executive privilege. But the National Archives revealed, in response to a lawsuit from the Electronic Privacy Information Center, that there are hundreds of emails in the separate, 300,000 document cache that the agency is reviewing for publication. “The communication to EPIC revealed that Kavanaugh sent 11 e-mails to John Yoo, the architect of warrantless wiretapping; 227 e-mails about ‘surveillance’ programs and the ‘Patriot Act;’ and 119 e-mails concerning ‘CAPPS II’ (passenger profiling), ‘Fusion Centers’ (government surveillance centers), and the Privacy Act,” EPIC said in a statement announcing the revelation.

With proper public understanding of Kavanaugh’s role in the unpopular policies of of the Bush White House, that role may have been disqualifying by itself.

Bush first proposed Kavanaugh for a seat on the D.C. Circuit in 2003. His nomination was part of the same game being played today, and that has been played for decades: The right wing in America has steadily eroded any liberal power on the bench since Ronald Reagan, and the Democrats have been powerless to do much about it. After a lengthy three-year process, punctuated by a number of harsh statements on the nomination from Democratic senators, Kavanaugh was confirmed to the bench. Sen. Patrick Leahy referred to the right-wing history of court-packing a month later, while discussing the nominations of four other judges, including Neil Gorsuch. “In the important D.C. Circuit,” Leahy said on the Senate floor, “the confirmation of Brett Kavanaugh was the culmination the Republicans’ decade-long attempt to pack the D.C. Circuit that began with the stalling of Merrick Garland’s nomination in 1996.”

Both Kavanaugh’s time with the Bush administration and his involvement with the administration’s controversial policies have been a constant undercurrent to the Senate hearings on his nomination, but he largely escaped serious scrutiny on that record — even though Kavanaugh continued to advocate for the worst of the security state from the bench. Senate Democrats expressed their skepticism over Kavanaugh’s dissembling about the policies; Kavanaugh told members of the Judiciary Committee in September that he was “not read into that program, not involved in crafting that program nor crafting the legal justifications for that program.” In a written response to a question posed by Sen. Dianne Feinstein on his involvement in the program, Kavanaugh dispensed with the vague answers and made his position clear. “I became aware of the program and the memos when they were publicly disclosed in news reports in 2004,” wrote Kavanaugh.

Kavanaugh says he had nothing to do with the Bush administration's torture program pic.twitter.com/PkQS2yHWRC

Just by looking at the National Archives description of the records, it appears clear that Kavanaugh was involved in the planning of the Bush-era surveillance rules which led to warrantless wiretapping being codified into the American national security state. Further, Kavanaugh’s alleged involvement in Bush-era judicial subterfuge by Republican hatchet man Manuel Miranda is still an open question, though Kavanaugh has repeatedly denied having any involvement in funneling the stolen information Miranda hacked from Senate Democrats in 2003 to the Bush administration. The Bush Justice Department declined to prosecute Miranda, and questions about Kavanaugh’s level of cooperation will remain until at least the end of October.

Over the past decade, the political world has done everything possible to minimize and forget the crimes of the early to mid-2000s. The effect has been felt ever since. Members of the Bush administration and their hangers-on have spent their time working diligently to return to good standing in the social and professional worlds they once dominated in Washington and New York. Allowing them to reintegrate into elite society has had almost as catastrophic an effect on American politics as Donald Trump.

It’s not just Kavanaugh. The confirmation of Gina Haspel, an admitted proponent of torture who ran a Thailand black site in 2002 — a fact that became a minor issue before the Senate sent her back to Langley to run the CIA — was a perfect example of the insufficiency of the American political system to properly deal with the Bush regime toppling established norms around war and detainees.

Complaints from the left about the image rehabilitation of the Bushes have largely been met with derision. Esquire writer Charlie Pierce, who referred to John McCain’s funeral as a “council of war” for the resistance, fired off a riposte to his critics which sums up the liberal view of the need for a more genteel version of corporate dominance, regressive Christianity, and endless war.

“Am a touch sick of the lefty hot takes by which those of us who were moved to a kind of optimism by the funeral Saturday have forgotten the crimes of the Bush administration and the crime that was Vietnam,” tweeted Pierce. “House is on fire. Don’t care who brings a hose.”

Bush’s hose, it turns out, has gasoline in it. The former president spent the weeks leading to the confirmation vote publicly defending Kavanaugh from charges of sexual assault and misconduct, and urging GOP senators who were wavering to support the nominee. He called his friend Sen. Susan Collins three times, the senator from Maine has said.

Kavanaugh’s career should have ended at the U.S. Court of Appeals for the D.C. Circuit. His new role as Supreme Court justice is what happens when democratic societies don’t hold criminals in the government accountable for their actions. At a bare minimum, everyone involved with the Bush administration’s war in Iraq and post-9/11 torture and detainee programs should have been thoroughly discredited and rejected from polite society. That they weren’t may end up being one of the defining moments in the 21st century.