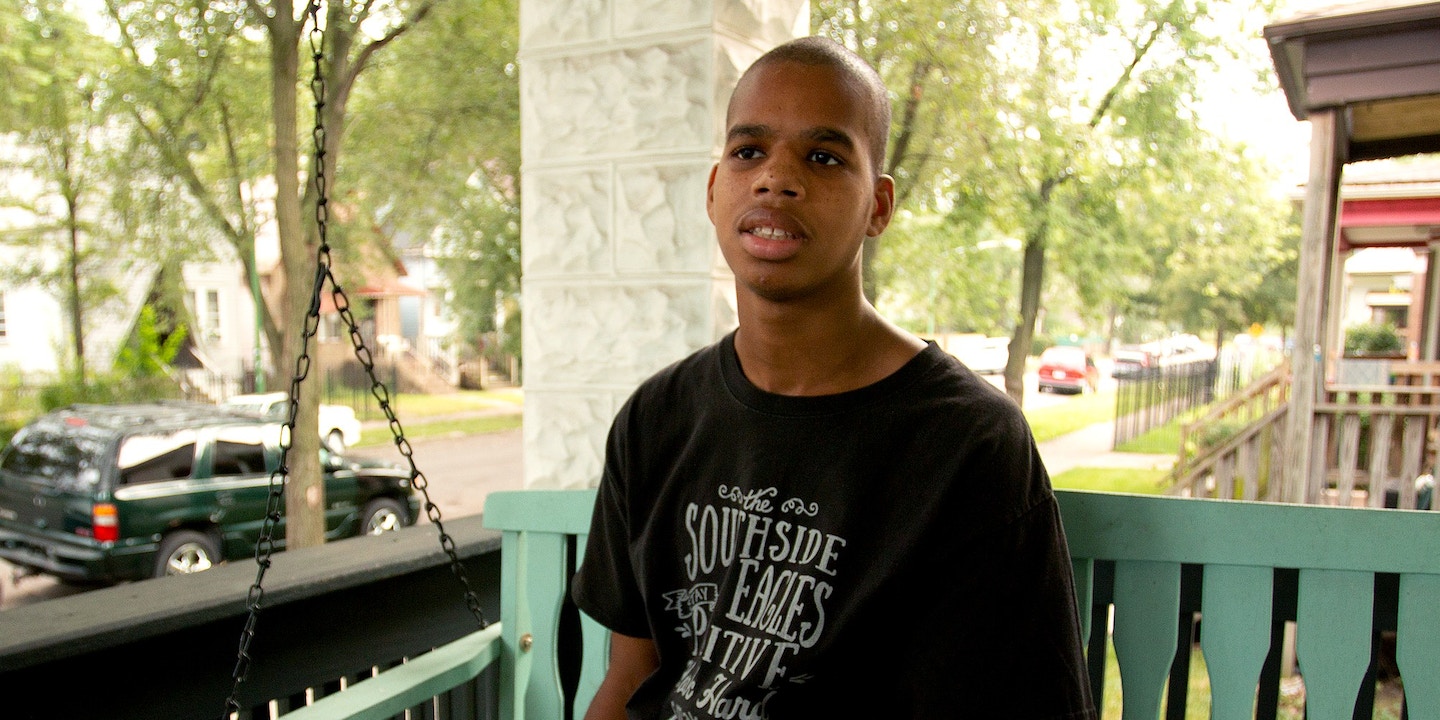 Viewed against the backdrop of the recently concluded trial of officer Jason Van Dyke for the murder of 17-year-old Laquan McDonald, the release of the Hayes video is an occasion to ask what has and has not changed since the release of the McDonald video in the fall of 2015 precipitated a political upheaval and demands for reform.

At the time of the incident, Ricky Hayes was 19 years old, but apart from his height, everything about him was childlike. He is developmentally and intellectually disabled. He looks like a child and has the mind of a child. A ward of the state, he lives with a caretaker in a neighborhood on the far south side of the city.

According to his lawyer Gabriel Hardy, Hayes frequently sneaks out of the house and has a history of getting lost out in the city. At roughly 1:25 a.m. on August 13, 2017, his caretaker checked his room and found that he wasn’t there. She immediately called the police to report him missing. About half an hour later, police officers arrived. The caretaker filled out a missing person report and told the officers about Hayes’s disabilities.

In a civil suit against Muhammad and the city of Chicago, Hardy alleges that multiple surveillance cameras recorded Hayes as he wandered his neighborhood. Dressed in shorts, a short sleeve shirt, and sneakers, he can be seen skipping and singing to himself.

At about 5:00 a.m. Muhammad, who was off-duty and was driving his own pick-up truck, saw Hayes and began chasing him. At one point, he drove his truck up on the sidewalk within a few feet of Hayes. Frightened, the boy ran away. The officer continued the pursuit.

Eventually, Hayes stopped running and stood motionless with his hands at his sides on the front lawn of a house. What happened next was captured by a surveillance camera mounted on that house.

Muhammad pulled up and stopped roughly 20 feet from Hayes. Sitting in the cab of his truck, he opened fire with his service weapon, striking Hayes in his chest and arm. Wounded, Hayes again ran away. Muhammad pursued him in his truck, caught up with him, and ordered him to lie face down on the ground.

Muhammad then called 911 and requested an ambulance. I obtained an audio recording of the call through a Freedom of Information Act request. When the dispatcher asks what happened, Muhammad replies, “The guy pulled like he was about to pull a gun on me, walked up to the car, and I had to shoot.”

Audio from officer Khalil Muhammad’s 911 call after he shot Ricky Hayes on August 13, 2017. Credit: Office of Emergency Management and Communications of the City of Chicago

On the recording, you can hear Hayes’s frightened screams in the background.

Hayes’s gunshot wounds were relatively minor. It is not clear whether he was shot twice or if a single bullet did damage to both his chest and arm. He was treated at a nearby hospital and released. The psychological damage, says Hardy, has been enduring, requiring repeated psychiatric hospitalizations since the shooting.

The incident occurred over a year ago. How have various institutions — the Chicago Police Department, the city, COPA, and the State’s Attorney — responded? The institutional response to the Laquan McDonald incident has now been massively and minutely documented, revealing a concerted and immensely costly effort to sustain a patently false narrative about what has now been determined by a jury to be the police murder of a child. What has been learned? How have internal procedures and practices changed? Do institutional pathologies diagnosed in the aftermath of the McDonald revelations persist?

On August 13, the Chicago Police Department issued a press release about the shooting under the letterhead of Superintendent Eddie Johnson:

CHICAGO – On Sunday, August 13, 2017, shortly before 6:00AM, an off-duty Chicago Police Sergeant observed a male subject behaving suspiciously on the 10000 block of S. Wood St. The Sergeant, who was in his personal vehicle at the time, began to question the individual who then became elusive and unresponsive. During questioning by the off-duty Sergeant, the encounter escalated prompting the Sergeant to discharge his service weapon, striking the individual in the arm. The man was transported to an area hospital where he was treated for his injuries and released. At this time, a weapon has not been recovered.

As is often the case in statements of this genre, the passive voice relieves the officer of agency and assigns it to the victim: “the encounter escalated prompting the Sergeant to discharge his service weapon.” The statement reflects the officer’s account of what happened, with one significant difference: It notes that no gun was found.

The day after the shooting, Johnson at a press conference essentially echoed the press release, stating that “Officer Muhammad continued to question the man, and the encounter escalated in some way which prompted the off-duty officer to discharge his weapon.”

In a departure from the customary practice of putting officers involved in shootings on desk duty for 30 days, the department stripped Muhammad of his police powers indefinitely.

“We still have,” Johnson observed, “many unanswered questions.”

Some of those questions may have been definitively answered by the surveillance video collected by COPA within days of the shooting. Yet the CPD was not moved to revise and update its “preliminary statement” in view of the new information. Whether by design or inattention, the original narrative — from the officer’s perspective — remains as the only account available to the public.

There is another telling phrase in the press release. The “male subject” is described not as aggressive but as “elusive and unresponsive.” Those are apt words perhaps to describe the behavior of an intellectually disabled child with limited powers of comprehension and expression, but they are hardly suggestive of a threat warranting the use of deadly force by the officer.

When the incident occurred, investigations of police-involved shootings were conducted by the Independent Police Review Authority, or IPRA, which was in the process of being reconstituted as COPA as part of the post-Laquan McDonald reforms. In both incarnations, the agency appears to have conducted a thorough, rigorous investigation, though it won’t be possible to know for sure until the investigative file is made public.

According to a source close to the investigation, Sharon Fairley, the chief administrator of IPRA at the time, was “mortified” when she saw the video and immediately referred the case to the Office of the State’s Attorney, which ultimately declined to bring criminal charges. There is a moment captured in the video when Hayes brings his hand close to his pocket. Given how difficult it is to successfully prosecute a police shooting case, this was, it appears, enough to deter the state’s attorney from bringing charges.

The most perplexing aspect of COPA’s management of the case is the fact that it did not release the video before now. In the aftermath of the controversy over suppression of the McDonald video for 13 months, the city adopted a policy that videos of police shootings are to be released within 60 days of the incident. This policy is widely viewed as inadequate. In any case, it was not followed in the Hayes case.

Gabriel Hardy describes a confusing sequence of interactions with COPA. Initially, the agency was disposed to release the video and other information about the case. Then, in a reversal, it took the position that the video could not be released. This was dictated by the City Law Office, which took the position that Hayes, although 19, should be regarded as a juvenile due to his disability and the fact that he is in foster care. More recently, COPA told Hardy that it could not release the video because of a “concurrent investigation,” an apparent reference to the Police Board review that follows a COPA recommendation that an officer be disciplined. And now COPA is about to release the video.

Does this history reflect an effort to suppress the video by the city? It’s difficult to say. What it clearly reveals is the constraints imposed on COPA by the City Law Office and the Police Board. Moreover, it demonstrates the incoherence of the current policy on video release. The flaws in that policy were dramatically illustrated over the summer in connection with the fatal police shooting of a man named Harith Augustus. Within 24 hours, the CPD released video that reinforced the official narrative by showing that Augustus was armed. It took a lawsuit to force the release a month later of additional video that revealed problematic details of the police encounter with Augustus. Dashcam video captures the officer who shot Augustus telling his sergeant that Augustus pulled a gun on him, and falsely stating that Augustus had fired at the police. Other video footage shows another officer removing Augustus’s gun from his holster as he lays on the ground.

The de facto policy is thus that the CPD releases video when it serves its purposes, while COPA’s aspirations to robust transparency are too often frustrated by other agencies with which it interfaces. The issue transcends the release of videos. The city of Chicago is at the threshold of committing to a consent decree that will govern police reform going forward. A robust and proactive transparency policy is a necessary condition if we are to realize the historic opening for fundamental, enduring change that is at hand. Access to the public information necessary to monitor and hold accountable government officials cannot be left to the discretion of those officials.

This article has been updated with the video footage of Chicago police officer Khalil Muhammad shooting Ricky Hayes.