Fifty-six years ago today, on Black Saturday, the world was nearly destroyed in the Cuban missile crisis. 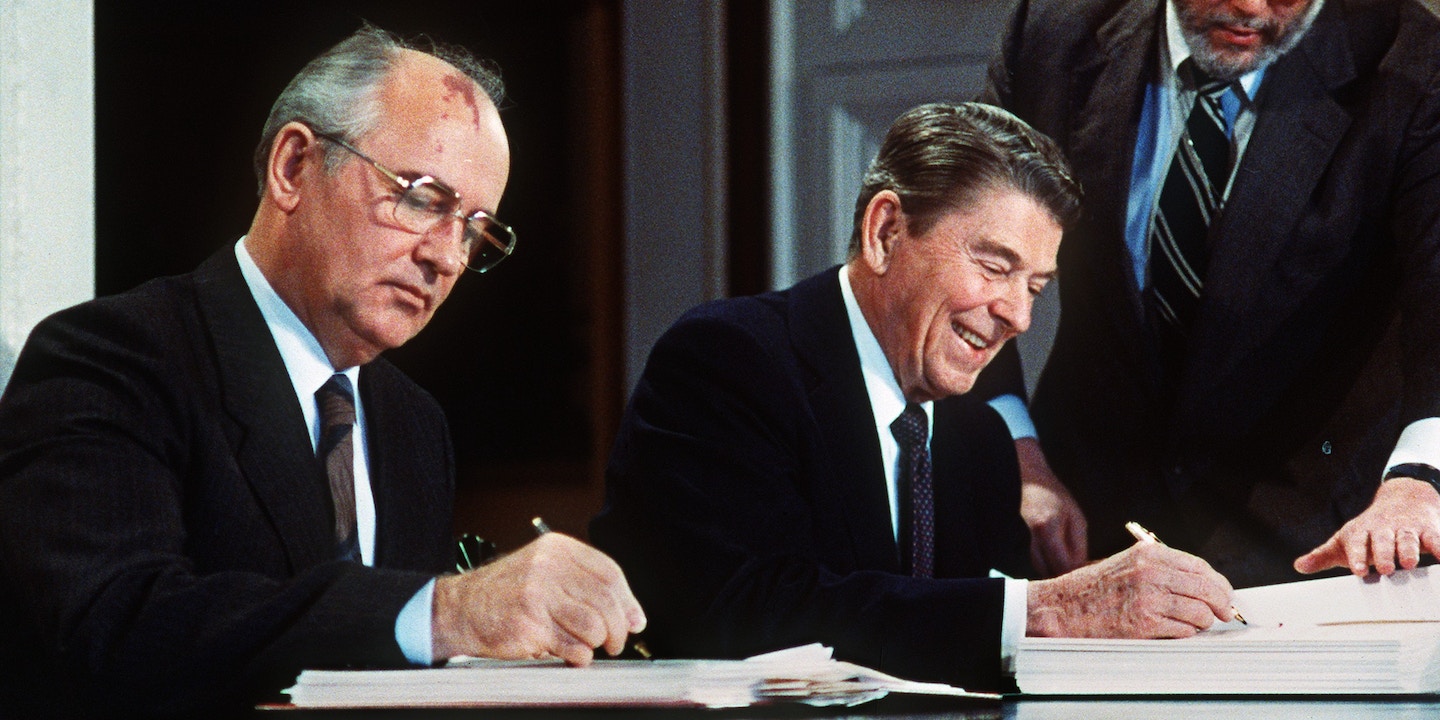 President Donald Trump’s announcement on October 20 that he intends to pull the United States out of the Intermediate-Range Nuclear Forces Treaty was, if nothing else, appropriately timed. On that date exactly 56 years before, President John F. Kennedy abruptly cut short a midterm campaign trip to Illinois because, the White House said, he had a cold. In fact, Kennedy was returning to Washington to address the Cuban missile crisis — the closest humanity has ever come to obliterating itself with a nuclear war.

The INF treaty was signed in 1987 by President Ronald Reagan and Soviet General Secretary Mikhail Gorbachev. It required both countries to forgo any land-based missiles, nuclear or otherwise, with ranges between 500 and 5,500 kilometers.

But arms control treaties are never about weapons and numbers alone. They can help enemy nations create virtuous circles, both between them and within themselves. Verification requires constant communication and the establishment of trust; it creates constituencies for peace inside governments and in the general public; this reduces on both sides the power of the paranoid, reactionary wing that exists in every country; this creates space for further progress; and so on.

The long negotiation of the INF treaty, and the post-signing environment it helped create, was part of an extraordinary collapse of tensions between the U.S. and the Soviet Union during the 1980s. When Reagan took office, the Soviets genuinely believed that the U.S. might engage in a nuclear first strike against them. This, in turn, led to two separate moments in 1983 in which the two countries came terrifyingly close to accidental nuclear war — closer than at any time since the Cuban missile crisis.

Instead, the INF treaty was part of an era of good feelings that contributed to one of the most remarkable events of the past 100 years: the largely peaceful implosion of the Soviet Empire. Empires generally do not go quietly, and the dynamics of imperial collapse often contribute to huge conflagrations. Think of the Austro-Hungarian Empire, the Ottoman Empire, and World War I; or the British Empire and World War II. The Soviet fall was an incredible piece of good fortune for the world; if it had happened in the early 1980s, instead of a few years later, it plausibly would have been catastrophic.

It is almost certainly these more diffuse effects that concern the smarter members of the Trump administration, such as national security adviser John Bolton, who’s yearned for decades to decommission the treaty. Russians may be cheating on the treaty in a modest way, while China is not bound by it at all and is developing intermediate-range missiles. But it’s hard to see how this will affect legitimate U.S. security interests.

On the other hand, exiting the treaty will do more than just lead to an arms race in which all three countries throw themselves into building new weapons. It will also create an atmosphere in which any rational modus vivendi between the U.S. and Russia, or the U.S. and China, will be far more difficult. This is the prize for Bolton and his allies, who can imagine only one world order: One in which they give orders, and everyone else submits.

Bolton has the standard self-perception of his genre of human: In his memoir, “Surrender Is Not an Option,” he explains that he cares about “hard reality,” in contrast to the “dreamy and academic” fools who support arms control.

But in fact, it is Bolton who is living inside of a dream. The hard reality is that our species almost committed suicide on October 27, the most dangerous moment of the Cuban missile crisis, later dubbed Black Saturday by the Kennedy administration. Even with comparative doves in charge of the U.S. and the Soviet Union, we came close to ending human civilization, thanks to mutual incomprehension. And we avoided it, as then-Defense Secretary Robert McNamara later said, not by talent or wisdom, but pure luck. Then, we created a false history of what happened, one which allows terrifying fantasists like Bolton to reach, and thrive within, the highest levels of power. 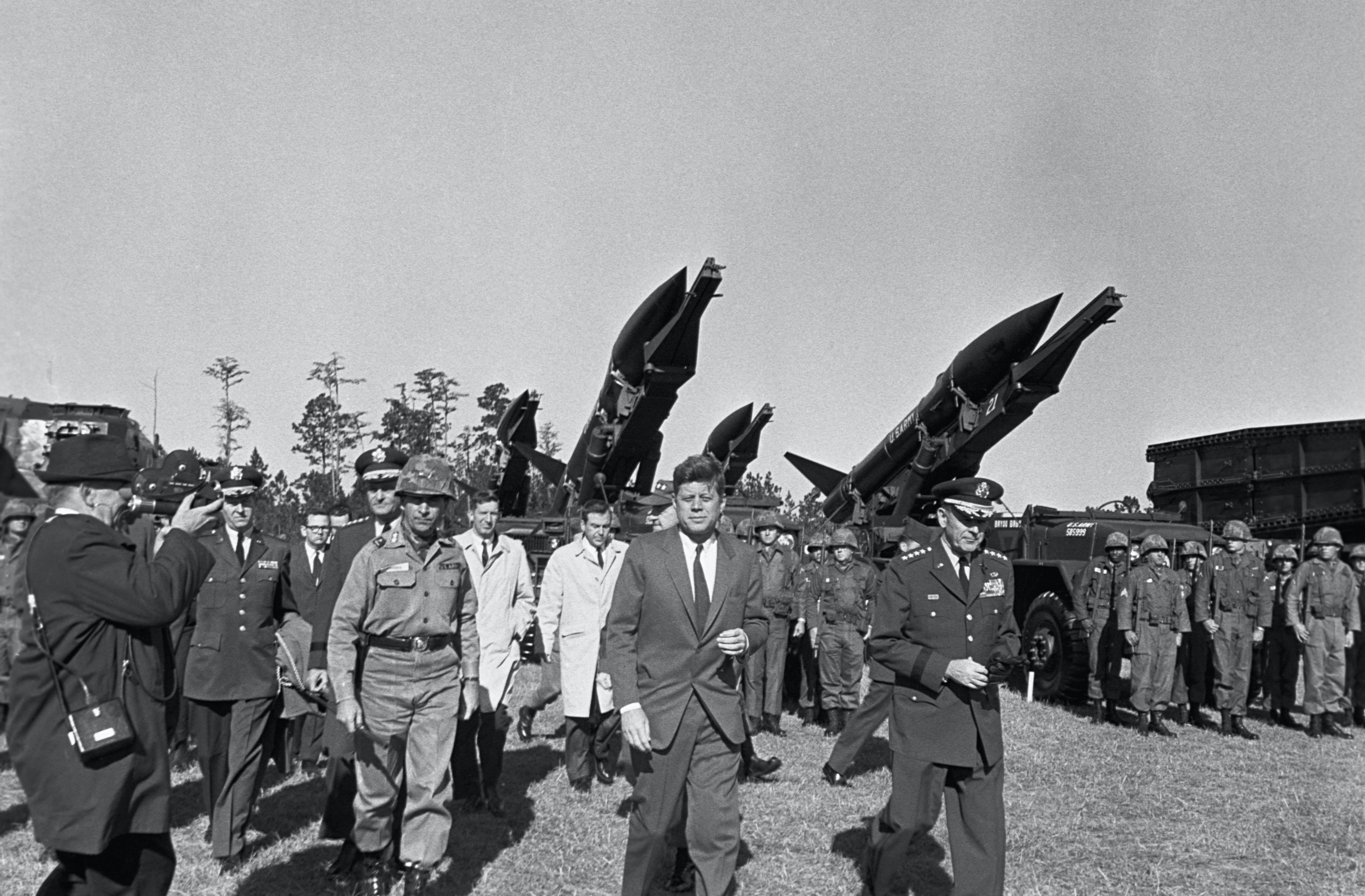 There is a standard story about the Cuban Missile Crisis, at least for those who remember it at all:

The perfidious Soviet communists, bent on intimidating the U.S. into submission via the superior power they wielded as a result of the missile gap, sent nuclear weapons to Cuba, from where they could strike the U.S. in minutes. But Kennedy stood tall, refusing to make any concessions to the Russian bullies. Kennedy went toe to toe with the Soviets, and demonstrated that he was tough enough to risk nuclear war. Finally, the other side blinked first and surrendered, taking the missiles out of Cuba. America won!

The hard reality, however, is that everything about this is false, both in its specifics and implications. It is, as James Blight and janet Lang, two of the top academic specialists on the crisis, have put it, “bullshit.” The even harder reality is that October 27 was a far more petrifying moment than U.S. and Soviet participants understood at the time — and they were terrified. Blight and Lang estimate that if the crisis were run under the same conditions 100 times, it would end in nuclear war 95 times. We are living in one of the five alternate universes in which humanity survived.

The roots of the Cuban missile crisis can be found in three main factors: America’s overwhelming nuclear superiority; the Bay of Pigs invasion of Cuba in 1961; and the stationing of U.S. intermediate nuclear missiles in Italy and Turkey early on during the Kennedy administration.

During the 1960 presidential election, Kennedy attacked the Eisenhower administration for allowing the development of a “missile gap” between the U.S. and the Soviet Union. There was indeed an enormous gap in the number of intercontinental ballistic missiles possessed by each country — but in favor of the U.S. As of 1962, the Soviets only had 20, and they were of such poor quality that they might not have managed to accurately reach the U.S. The U.S. had hundreds. This made the Soviets believe a nuclear first strike by the U.S. — something genuinely supported by factions of the U.S. military and hard right — could leave them unable to retaliate. The Soviets did have missiles, however, that could reach the U.S. mainland from Cuba.

The Soviets were also motivated to send the missiles to Cuba because they believed they would deter another invasion attempt.

Finally, the Soviets reasonably saw it as leveling the playing field. The American nuclear missiles in Turkey could hit Moscow in 10 minutes. Now, the Soviet missiles in Cuba could do the same to Washington, D.C.

The U.S. did not perceive it this way when American reconnaissance discovered the Cuban missiles on October 14. The Joint Chiefs of Staff recommended an immediate invasion of Cuba. Kennedy instead chose to blockade the island. But by October 26, he had come to believe that only an invasion could remove the missiles. The administration began planning for a replacement government in Cuba. All the while the U.S. was acting in the dark, with the CIA concluding that Soviet nuclear warheads had not yet arrived in Cuba to arm the missiles. They had.

Shortly after midnight, in the early morning of Black Saturday, the U.S. informed NATO that it “may find it necessary within a very short time” to attack Cuba. At noon, a U-2 flight over Cuba was shot down, killing the pilot. On all sides, war — potentially nuclear war — seemed likely, if not inevitable.

But that night, Kennedy made the most important presidential decision in history: He accepted an offer from Soviet leader Nikita Khrushchev to remove the U.S. missiles in Italy and Turkey in return for the removal of the Soviet missiles in Cuba. But the U.S. part of the bargain was kept secret from Americans. The administration maintained that Kennedy had forced the Soviets to give in, giving them nothing.

That was, of course, more than frightening enough. But here’s the rest of the story.

On October 27, a U.S. Navy ship participating in the blockade dropped depth charges on a Soviet submarine. It was only discovered years later that not only was the submarine armed with nuclear torpedoes, but also was out of radio contact with the Soviet government and believed that the war had begun. The captain wanted to use the torpedoes, which almost certainly would have led to the U.S using nuclear weapons in response. However, according to Soviet protocol, the torpedoes could only be launched with the approval of all three officers aboard. One of them refused.

The U.S. also had no idea that in addition to the missiles, the Soviets had brought tactical nuclear weapons to Cuba and the troops on the ground had received permission to use them against a U.S. invasion without further authorization from Moscow. This, too, would have led to a U.S. nuclear response and Armageddon. McNamara first learned this when attending a Havana conference organized by Blight and Lang in 1992, on the 30th anniversary of the crisis. McNamara had also come to believe by Black Saturday that an invasion might be necessary. Blight and Lang report that McNamara turned pale and was temporarily speechless as he listened to an aged Soviet general describe the existence of the tactical nuclear weapons. When he spoke, it was to ask the translator to repeat himself.

Castro, too, had his preconceptions shattered at the conference. He had come to believe that the Kennedy administration was determined to invade Cuba again, nuclear weapons or not, and this time crush its young government and society. Cuba’s only choice was either to accept its destruction, or be destroyed and take America with it. Castro had therefore written a telegram to Khrushchev that arrived on October 27, beseeching him to use the Soviet Union’s full nuclear might against the U.S. if an invasion took place. But this was all wrong, McNamara told Castro: After the Bay of Pigs, Kennedy had decided that another invasion attempt was foolish.

So in the end, we’re not here to think about the 56th anniversary of Black Saturday because of our overweening military might, or because we forced our adversaries to bend to our will. It’s just the opposite, plus an extraordinary run of serendipitous flukes.

But what we can be sure of is that if people like Trump and Bolton had been in charge in 1962, then today there would be no discussion of the INF treaty — because there would be no treaty and no one to discuss it. It’s also certain that on our current trajectory, the day will come when the world will face a similar crisis. That time we won’t get the same roll of the dice. The hard reality of the Cuban missile crisis is that, as Blight and Lang put it, “either we put an end to nuclear weapons, or they will put an end to us.”