GOP Rep. Tom Reed wants to unravel the Consumer Financial Protection Bureau, the agency that polices debt collection firms like the one he founded. 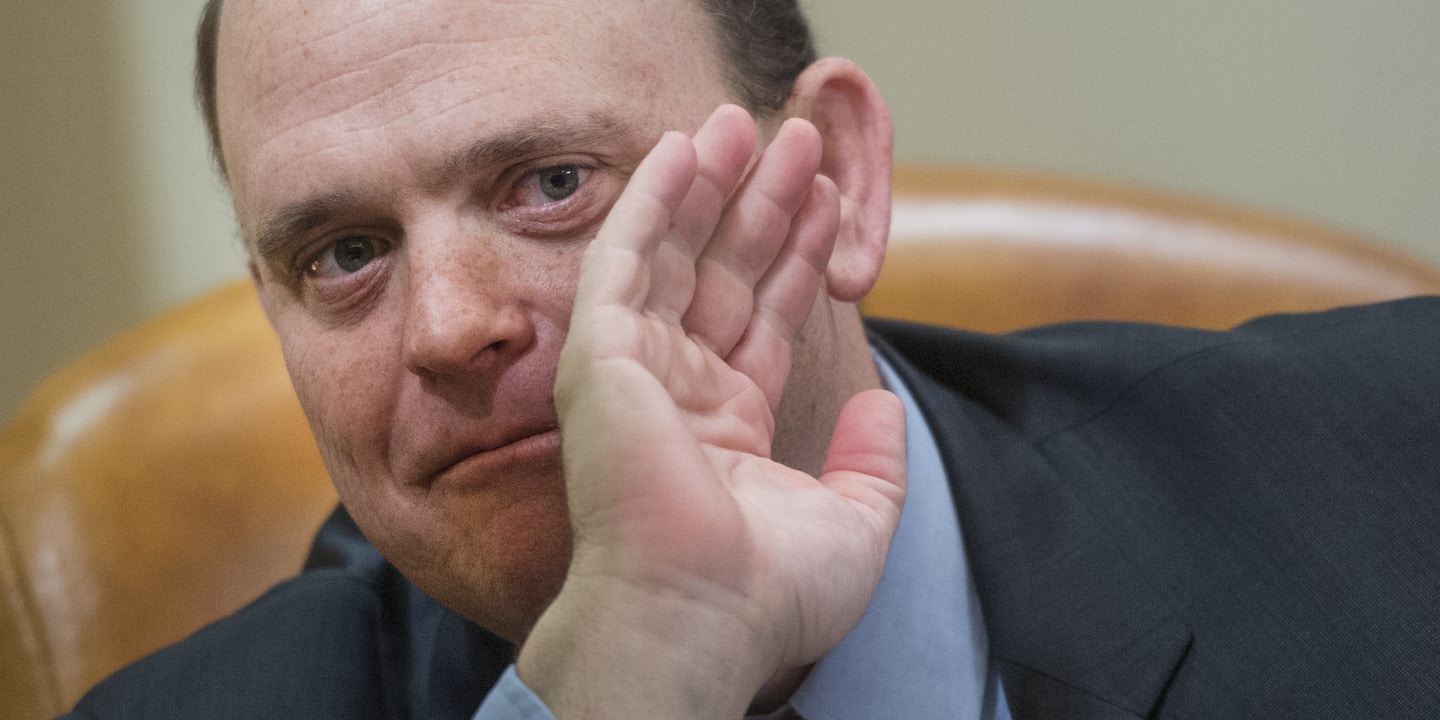 Over the last two years, Michael Enslow, a resident of Waterloo, New York, has been in a back-and-forth with a debt collector. The exchanges, familiar to many Americans, ended up in federal court, claiming that the debt collection company repeatedly refused to remove medical debt he long ago resolved from his credit report. Their error prevented him from getting preapproved for a mortgage.

Such chicanery is par for the course in the debt collection industry, which is known for abusive practices, including bullying consumers into paying debts they do not owe. What’s unusual about Enslow’s case is that he was mistreated by a company that his own representative in Congress, western New York’s Republican Rep. Tom Reed, founded.

What’s unusual about Enslow’s case is that he was mistreated by a company that his own representative in Congress, Rep. Tom Reed, founded.

More than a dozen other consumers, including other New York residents, have filed complaints about Reed’s company, according to a docket maintained by the Consumer Financial Protection Bureau, one of the agencies that oversees consumer lending companies. Several of the complaints claim that Reed’s firm harassed them for medical debt they never incurred or had already resolved.

For nearly two decades, Reed reaped financial rewards from the debt collection industry, managing a law firm that specialized in the trade. After his election to Congress in 2010, Reed resisted congressional rules that prohibited him from practicing law and required him to remove his name from his law firm. The Buffalo News reported that 194 court documents continued to carry his law firm’s name after he was elected. But his name remained until 2014, when Reed said he had sold his stake in the company to his brother. In response to an inquiry from The Intercept, Abbey Daugherty, a spokesperson for Reed’s campaign, said, “Tom is not involved in this business.”

Yet records show that the Reed household did not fully divest from the company, though the company was rebranded from the “Law Office of Thomas W. Reed,” to “RR Resource Recovery.” An ownership stake in the firm is now controlled by Jean Reed, the wife of Tom Reed. And the newly incorporated firm lists Tom Reed’s brother John as the registration agent.

Reed makes little effort to distance himself from the company. Records show that he owns a property company called Reed & Reed Properties that houses RR Resource Recovery. And his personal ethics disclosure shows that Reed’s household continues to own a stake in both firms and collect an income of up to $100,000 a year from the two companies.

When The Intercept asked Reed’s campaign about his continued involvement with and income from the two companies, Daugherty responded with a comment about Reed’s wife. “Hi,” Daugherty said in an email, “are you suggesting that as a woman she can’t run her own business or have her own independent life?”

From his perch in Congress, Reed has participated in several Republican-led attempts to unravel the Consumer Financial Protection Bureau, the primary federal agency that polices debt collection practices. The attacks would defang the very agency that has collected consumer complaints about Reed’s company.

Last year, Reed voted for the Financial CHOICE Act, a sprawling financial deregulation bill that rolls back CFPB’s mandate to regulate “unfair, deceptive, and abusive practices,” and weakens the agency’s independence by making the director an at-will employee of the president. In a conference call with reporters after the vote, Reed claimed that such a move was necessary to stop the CFPB from spending “millions on a Taj Mahal type of operation for their facility to serve these unelected, independent bureaucrats.”

The remarks echoed common — and misleading — talking points from opponents of the CFPB. The agency had occupied an aging building that once housed the now-defunct Office of Thrift Supervision. When a renovation came due, the agencies’ opponents twisted an inspector general’s report to exaggerate the costs, which were in line with ordinary construction costs.

Enslow is not the only person to lodge a complaint against the company Reed founded. The Intercept spoke to others and reviewed records, from as far back as 15 years ago, of residents in Reed’s district who said they were unfairly targeted by his company.

Kevin Shorthouse, a resident of Addison, New York, and one of Reed’s constituents, said he was hounded by the debt collection firm. “In 2003, I was out of work, and we had nothing, and it was bad,” said Shorthouse, an ironworker, in an interview. He said that while he was on unemployment, after losing his job at a plant, he missed a payment for a medical bill at Corning Hospital for his son.

Josh Brokaw, a local investigative reporter, filed a Freedom of Information Act request with the Federal Trade Commission and found similar stories. A resident of Binghamton, New York, said RR Resource Recovery reported, multiple times, an unpaid claim to three credit agencies on a payment to a doctor that the patient had never seen and who was unaffiliated with the resident’s provider network. In another complaint, a resident of Endicott, New York, claimed that they mistakenly sent a check of $50 to RR Resource Recovery. The company cashed the check and refused a refund without a $30 surcharge, according to a record uncovered by Brokaw.

Over the last year, local activists raised Reed’s financial interest in medical debt collection, claiming that he profits from the current patchwork of policies, and that he would personally benefit further from his vote to repeal the Affordable Care Act.

One of the confrontations occurred at a town hall with the congressperson last summer. “The reality is, the very business that you founded in Corning, it’s now called RR Resource Recovery, Offices of Tom Reed,” said a woman who identified herself as an attorney for locals who have fallen on hard times. “And very often, they don’t have health coverage. One of the first letters we get is from your firm, because you represent hospitals and medical providers who sue people when they can’t pay their medical bills,” she continued, noting that Reed’s wife has continued to collect a six-figure salary from the company over the years.

Reed did not directly respond to the allegation that his household benefits from medical debt. “Even if we went to single-payer health care, who do you think is going to pay for that?” Reed retorted.

Activism and advocacy for single payer or a more universal health care program has seen a resurgence in recent years. Such a shift would mean that Americans pay little to no premiums or deductibles.

Tracy Mitrano, Reed’s Democratic opponent for the 23rd Congressional District, has campaigned for “Medicare for All,” making the issue front and center in her campaign, along with bringing broadband to rural New York and tackling student debt. Reed, however, has largely sidestepped the issue of health care, instead campaigning on his support for President Donald Trump and deploying the catch-all insult he uses against every Democratic opponent, labeling Mitrano an “extreme Ithaca liberal.”