This week, a federal court will hear arguments in a case challenging the Trump administration’s failure to implement a waiver system for the travel ban. 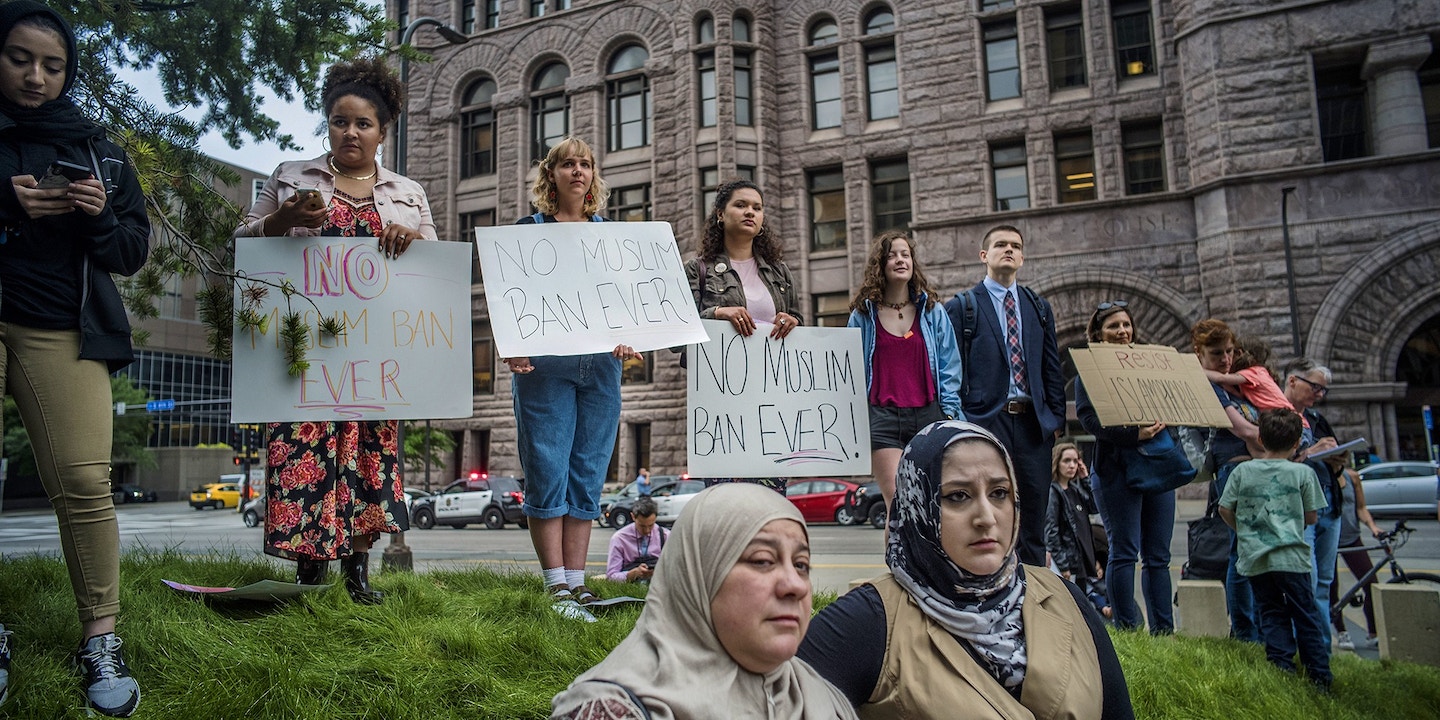 Opponents of Donald Trump’s travel ban have a chance to chip away at it this week by challenging the way it’s been implemented. If they’re successful, Trump will have only his own administration to blame.

The argument that a group of plaintiffs is making is straightforward: Because the travel ban was upheld, individuals impacted by it can only enter the United States through a waiver system that was said to be a safeguard against arbitrarily keeping people out of the country. Yet the administration has done next to nothing to set the waiver system up, which suggests that a total ban of Muslim travelers from the targeted countries was indeed the original intent.

The U.S. Supreme Court upheld the ban, known as Presidential Proclamation 9645, in June. The proclamation allows for waivers for foreign nationals who establish that the government’s denial of a visa would cause them undue hardship, and that their entry would not threaten the national security or public safety of the United States, and would be in the national interest. The proclamation called on the secretaries of State and Homeland Security to “adopt guidance addressing circumstances in which waivers may be appropriate.” The proclamation also lists a number of such circumstances. For example, a waiver would be appropriate for an individual who is a student in the United States, has significant business obligations in the country, or is coming to visit or reside with a close family member.

The government has not only failed to provide any meaningful guidance on the waiver, according to an ongoing lawsuit against the Trump administration, but it is also not providing any meaningful consideration of an applicant’s eligibility for a waiver. Within days of the proclamation going into effect, scores of visa applications were denied. Many applicants whose applications were denied at their interviews were told that their eligibility for a waiver would not be considered. At least one consulate explicitly told applicants not to submit any documents in support of a waiver application. “Applicants are thus at a loss for what to do,” the lawsuit reads.

For these reasons, the plaintiffs argue, the government has violated the Administrative Procedure Act, which prohibits federal action that is “arbitrary, capricious, an abuse of discretion, or otherwise not in accordance with law.”

The process, or lack of it, makes it impossible for individuals who should seemingly be exempt from the ban to get permission to travel to the United States. The plaintiffs are asking the court to order the Trump administration to retract all the visa denials it issued under the ban and give those individuals the chance to apply for a waiver. The court should also order the State and Homeland Security departments to issue clear guidelines on the waiver process, including by letting applicants know what type of documents they should submit to apply for a waiver. Those applications should be weighed on a case-by-case basis, as the language of the proclamation requires, the plaintiffs charge.

The U.S. District Court for the Northern District of California will on Thursday hear arguments in the case, known as Emami v. Nielsen. It was brought by Muslim Advocates, Lotfi Legal, the Immigrant Advocacy and Litigation Center, and Public Counsel against the Homeland Security and State departments. The class-action lawsuit, which was filed on behalf of 36 plaintiffs of Iranian, Libyan, Somali, Syrian, and Yemeni backgrounds, covers nationals of the five countries included in all three iterations of the travel ban.

The crux of the arguments raised in round two of the travel ban fight are procedural, but the plaintiffs also argue that the lack of a waiver process violates the Due Process Clause of the Fifth Amendment. The blanket denials of visas to applicants from the targeted countries, combined with Trump’s statements regarding his intent for instituting a travel ban “makes clear that Defendants are targeting individuals for discriminatory treatment based on their country of origin or nationality, without any lawful justification,” the complaint reads. (In Hawaii v. Trump, the Supreme Court upheld the travel ban without deciding on the merits of the constitutional claims raised.)

“It goes to the heart of the question of whether this ban is actually intended to advance national security or whether it’s intended to shut Muslims out of the United States.”

“This is a case fundamentally about a government putting forth two completely contradictory statements,” said Sirine Shebaya, an attorney at Muslim Advocates who will be arguing the case in federal court. Trump, in his proclamation, made a somewhat binding statement that each individual applicant will be assessed against certain criteria for a waiver, but at the same time, the government has prevented individuals from having a way to make that demonstration, Shebaya explained. “I think it goes to the heart of the question of whether this ban is actually intended to advance national security or whether it’s intended to shut Muslims out of the United States.”

Between December 8, 2017, and April 30, 2018, the government issued waivers to the ban in only 2 percent of all cases, according to State Department data. The numbers went up in the months after the ban was upheld, but it’s still unclear how many people remain stuck in processing. If it’s any indication, though, Muslim Advocates clients remain in bureaucratic limbo. And even in cases where the waiver was approved, Shebaya said, there’s no way to know whether the visa was ultimately issued.

The government, in its motion to dismiss, largely defended itself against the claims in the lawsuit by referring to the doctrine of consular nonreviewability, which means that a discretionary decision made by a consular officer cannot be appealed. The defendants also argue that the proclamation does not create individually enforceable rights that can be litigated in court. They point to Hawaii v. Trump, in which the majority of the Supreme Court cited the case-by-case waiver provision in its decision to uphold the ban. The plaintiffs counter that merely announcing the intent to create a waiver process is not the same thing as actually creating one.

In his dissenting opinion, Justice Stephen Breyer wrote that there is evidence that the government is not applying the terms of the proclamation as written, supporting the inference that the proclamation is a “Muslim ban” and not a “security-based ban.” In her dissent, Justice Sonia Sotomayor went even further. “Ultimately, what began as a policy explicitly ‘calling for a total and complete shutdown of Muslims entering the United States’ has since morphed into a ‘Proclamation’ putatively based on national-security concerns,” she wrote, referring to Trump’s December 2015 statement that many point to as the genesis of the travel ban. “But this new window dressing cannot conceal an unassailable fact: the words of the President and his advisers create the strong perception that the Proclamation is contaminated by impermissible discriminatory animus against Islam and its followers.”

The plaintiffs in the Muslim Advocates lawsuit fit into a number of the 10 circumstances Trump laid out in his proclamation under which a waiver might be appropriate. The scenarios described in the lawsuit demonstrate the arbitrary manner in which the government is dealing with what is supposed to be individualized consideration for a waiver grant.

Najib Adi, for example, is a Virginia-based dentist who has been unable to visit his native Syria since the start of the 2011 uprising. His dad died in 2014, and Adi was unable to attend the funeral. Now, he’s trying to bring his 70-year-old mother to live with him. She had an interview for an immigrant visa at the U.S. Consulate in Amman, Jordan, in December 2017, where she was told she’d be considered for a waiver. She is still waiting for an answer. Ismail Alghazali is a U.S. citizen of Yemeni origin who is currently stuck in Djibouti with his wife and infant child. At his wife’s January 2018 interview for a visa to the United States, her application was automatically denied and she was told she wouldn’t be considered for a waiver. She was never told that she could demonstrate her eligibility for a waiver under the proclamation.

“What it means for a lot of these families is there’s a great deal of confusion and ambiguity,” said Debbie Almontaser, a New-York based Yemeni-American activist. “They’ll come to the Yemeni American Merchants Association and say, ‘My family member needs a waiver, can you help us complete the waiver?’ And for us to stand there in front of them and say, ‘We’ll be happy to help you, but there’s no form or application,’ … they’ll look at us like we don’t know what we’re talking about.”

The Yemeni American Merchants Association, which Almontaser co-founded in the wake of the travel ban, has teamed up with a lawyer who’s trying to help Yemeni families in New York bring their loved ones to the United States. Different people they’ve worked with have had radically different experiences, depending on the consulate at which they’re applying for a visa, Almontaser said. In some cases, the consular officers have asked applicants for proof that they meet the waiver criteria, and in other cases, they’ve said they’ll review existing visa application information. “The confusion is causing people a lot of anxiety, and it’s also giving people a lot of false hope of what the government wants,” she added.

Chris Richardson, a former consular officer who submitted an affidavit in support of the Muslim Advocates litigation, said the government was hiding behind the doctrine of consular nonreviewability. Diplomats like himself, he said, were not actually empowered to exercise discretion in issuing waivers.

“I think that the Muslim ban itself became the template for all the other things that came after it.”

“If there was an actual waiver process, then consular officers themselves would’ve had total discretion in terms of issuing the visa to anyone they wanted,” said Richardson, who resigned from his diplomatic outpost in Madrid in March of this year. He said in his affidavit that it was his understanding that no one was to be eligible to apply for a visa waiver, and that consular officers were not allowed to exercise discretion to grant a waiver. Instead, they’d have to ask officials in Washington, who’d be empowered to make a final determination.

“You wouldn’t put up nondiscretionary hurdles in there unless you were trying to discourage people from giving waivers,” Richardson told The Intercept.

“I think that the Muslim ban itself became the template for all the other things that came after it,” Richardson said. Trump “realized with the Muslim ban that if you do something outrageous at first, and then you get the government to modify it to make it seem less bad, people will forget. People won’t care anymore. People will let it go.”