Is Jumaane Williams a True Progressive? A Rising Star Makes His Case to Be New York City’s Top Watchdog

In the race for public advocate, Jumaane Williams defends his record from critics who claim he’s not a “true” progressive. 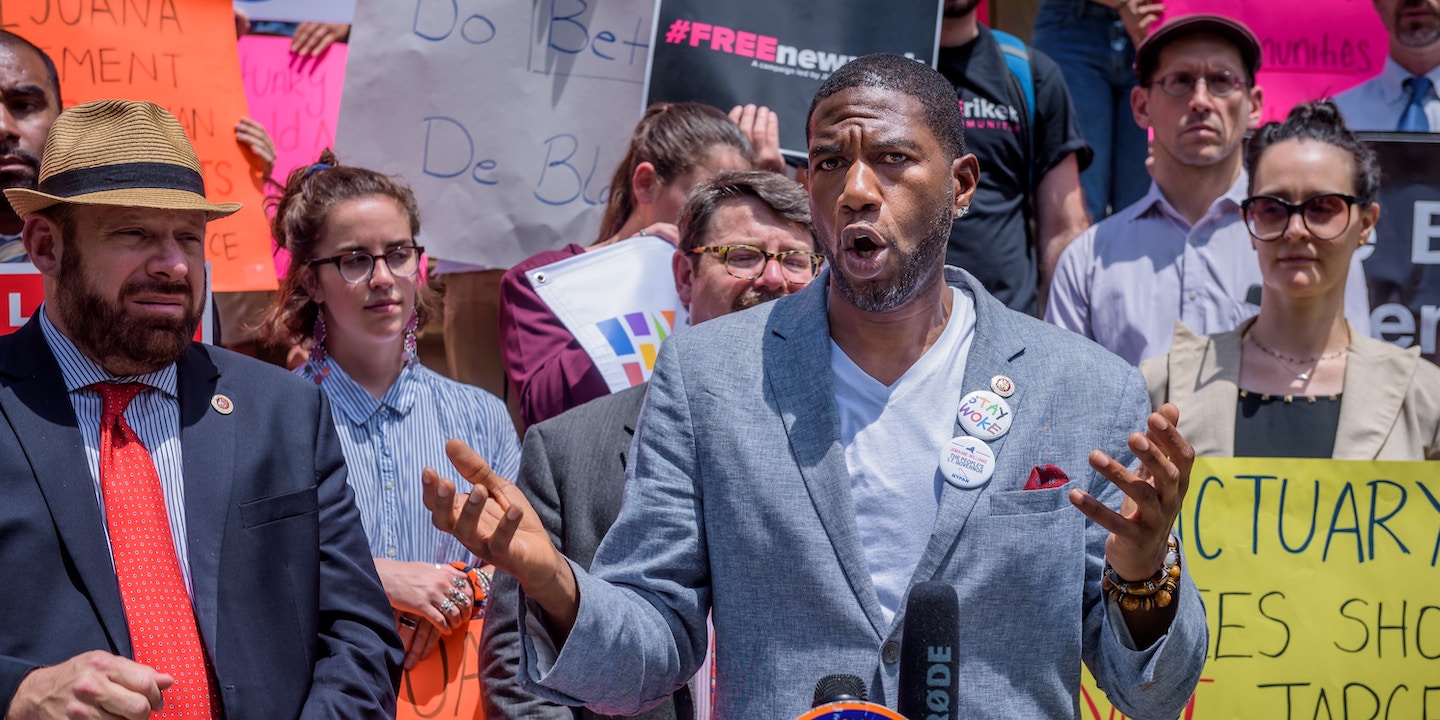 The race to fill New York City’s public advocate position is heating up, with at least a dozen candidates vying to fill the spot vacated by Letitia James, the incoming state attorney general. The public advocate position has served as a launching pad for higher office since its creation in 1993: Bill de Blasio was the third public advocate before becoming mayor of New York City. But perhaps more significantly, the public advocate is New York’s top watchdog post. They can introduce legislation, hold hearings, and bring lawsuits, and although they don’t have any voting power, they are well-positioned to hold the city government accountable to the people.

Just last month, a group of city council members unsuccessfully tried to abolish the office of public advocate, criticizing it as “unnecessary.” “They don’t do nothing,” Council Member Ruben Diaz Sr. told Politico at the time. “People have been talking about that for many years. I think that the time has come now.”

But Jumaane Williams, who narrowly lost the race for lieutenant governor early this year and is now considered a frontrunner for public advocate, disagrees. “I have always believed it was a very powerful office,” he told The Intercept, adding, “people don’t realize that it’s been around in some shape or form since the 1800s, and when they formalized it into public advocate’s office … they said they wanted this position to rise above politics.”

“I have effectively called out anyone who needs to, whether it’s the mayor, the governor, or the speaker, particularly in the past few terms, and that’s the type of courage that we need.”

Williams views himself as someone who is willing to speak truth to power. “What we’ve often seen is that sometimes people from the state will call out the mayor, sometimes people from the city will call out the governor, people will rarely call out the leaders of their own house,” Williams said. “I have effectively called out anyone who needs to, whether it’s the mayor, the governor, or the speaker, particularly in the past few terms, and that’s the type of courage that we need.”

But critics have pushed back against the characterization of Williams as a “true” progressive, citing his previous statements on his personal opposition to LGBT causes and abortion. He has said that he supports legal rights for all when it comes to legislating, but his opponents note that Williams abstained from a 2014 bill designed to allow transgender people to change their sex on their birth certificate. His conservative views on these issues were enough to sink two previous bids for city council speaker.

When asked about his progressive critics, Williams argued that his opponents have misconstrued his positions in the past, and skeptics need only look at his legislative track record for reassurance. “I have always been and always will be a true progressive in every sense of the word,” he said. Williams touted his role in passing a gender-neutral bathroom bill, and said of his position on reproductive rights: “I’ve been consistent on making sure women have a right to access safe and legal abortions, period.”

Williams is a tenant organizer by training and describes himself as an “activist elected official.” He’s running on a platform that includes a housing plan pushing for universal rent control, ending mass incarceration, and abolishing Immigration and Customs Enforcement. Jonathan Westin, executive director of New York Communities for Change, who has worked with Williams on housing issues over the years, told The Intercept that when it comes to rent control and affordable housing, there’s “no better champion in the state than Jumaane.”

“I’ve literally put my body on the line.”

He has been arrested several times for protesting issues ranging from immigration policy to the nomination of Supreme Court Justice Brett Kavanaugh. “I’ve literally put my body on the line, whether it was civil disobedience that was planned to make a point, whether it was getting tossed around with 16 other people like a rag doll to prevent the deportation of Ravi Ragbir, or making sure that I have people on my mind, in my heart, when i’m getting these bills passed and changing hard policy that people say can’t be changed.”

In addition to housing, he wants to prioritize “fighting real estate effectively, not just in name but actually doing it,” he said. “Transparency and accountability is huge. We have to have someone, again, that has courage to step up. This Amazon deal is a clear example of transparency being missing.”

But Nomiki Konst, who is also running for public advocate, questioned Williams’s willingness to speak truth to power consistently. As critics have noted, Williams’s opposition to Amazon’s plan to develop headquarters in Queens, New York, is a recent development. Last year, Williams joined his colleagues, including public advocate candidate and former New York City Council Speaker Melissa Mark-Viverito, in signing a letter to urge Amazon CEO Jeff Bezos to locate its headquarters in the city. The deal has infuriated activists and residents for a number of reasons, including because of the multibillion-dollar incentives package the state and city is giving the company.

“The worst types of politicians are the ones who reinvent their own bad histories, when it’s all on the record,” Konst said in an email. “Whether taking tens of thousands from the worst NY developers known for rezonings and gentrification or urging Amazon – a transnational corporation known for increasing homelessness and exploiting workers – to come to NY, we need someone who will serve the public’s interest and be independent as our next public advocate. Only then will we have someone who is truly committed to taking on the corruption head on that is hurting working New Yorkers and making this city unlivable.”

Williams responded that the next public advocate should be “someone with a proven track record of fighting for progressive causes and delivering tangible results.”

“I’d like to ask the other candidates running for this position: What have you done?”

“I’ve demonstrated this over the past two decades as a community organizer and elected official by using my voice and legislation to take on the real estate lobby, address our city’s affordable housing crisis, hold the mayor accountable and more. I’d like to ask the other candidates running for this position: What have you done?”

Konst has argued that because she isn’t an elected official, she can call out the real estate industry and the political machine more effectively. In an interview with The Intercept from September, Konst said of Williams, “I think he did a tremendous job in the lieutenant governor’s race, and I was so proud to support him throughout the way, but I do believe the public advocate position should be a race that is independent of politics.”

Some of the other declared candidates include New York City Council Member Rafael Espinal Jr. and Assembly Member and Democratic National Committee Vice Chair Michael Blake. Several others have indicated that they intend to run without officially declaring, so it’s not entirely clear who will end up on the ballot yet.

Williams raised his public profile after campaigning alongside Cynthia Nixon as a fellow democratic socialist in advance of the September 13, 2018 primary election, and he came closer to beating his opponent than any other progressive in a statewide race. So far, he has clinched endorsements from the Working Families Party and the New York Progress Action Network. During his lieutenant governor campaign, Williams won the backing of Sen. Bernie Sanders, I-Vt., and the Democratic Socialists of America. In the public advocate race, however, DSA and many of the other large progressive groups will likely refrain from endorsing anyone — perhaps due to the presence of Konst, a fellow DSA member.

Williams plans on applying his brand of activism to the public advocate position if elected. “The best elected leaders that I know are activists, so I’m going to do both,” he told The Intercept.