No Labels has grappled with conflicts of interest tied to its use of political consultants with links to Mark Penn, husband of founder Nancy Jacobsen. 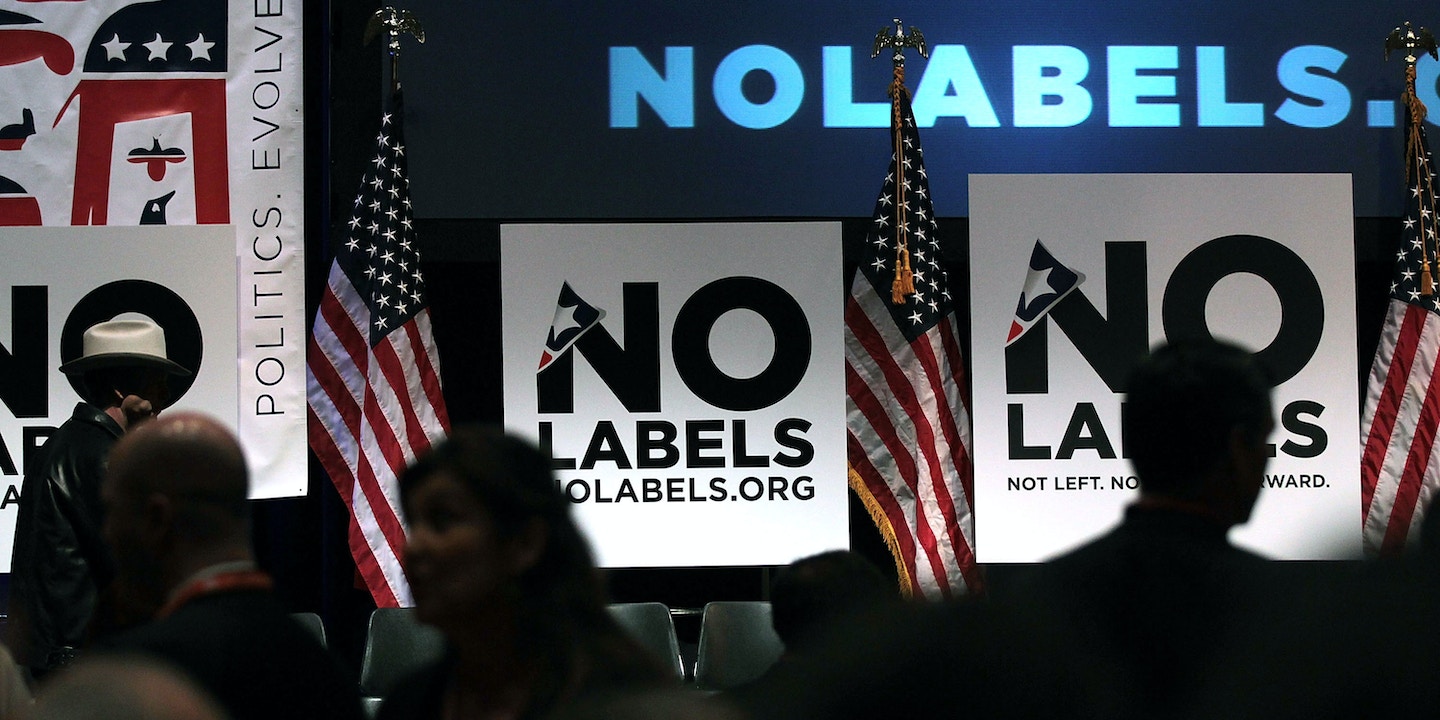 No Labels, a group that works to elect centrist candidates from both parties, has been grappling internally with conflicts of interest tied to its use of political consulting firms linked to the group’s leadership, according to documents and email correspondence obtained by The Intercept.

It’s been a rough few weeks of public scrutiny for No Labels. A Daily Beast investigation published earlier this month revealed that despite the group’s professed interest in reducing partisanship, it had solicited money from wealthy, partisan donors, many of them from the world of finance, on both sides of the political spectrum, and had considered making Democratic leader Nancy Pelosi a “bogeyman.”

The group was also in the news because the No Labels-backed House Problem Solvers Caucus, comprised of 24 Democrats and 24 Republicans, was organizing to block Pelosi’s bid for speaker of the House unless she agreed to a series of their proposed legislative reforms. The Democratic chair of the Problem Solvers Caucus is New Jersey Rep. Josh Gottheimer, a protégé of Mark Penn, who urged Hillary Clinton to attack Barack Obama as un-American in the 2008 presidential primary. As The Intercept previously reported, Penn, a longtime partisan and the husband of No Labels’s head Nancy Jacobson, is closely involved with the group’s work.

Jacobson pushed back on Daily Beast questions about Penn’s involvement in No Labels as “shameful and sexist.” She asked if a man were running the organization, would reporters still suggest — “based on little to no evidence — that his spouse is serving as the puppet master behind the scenes?”

Emails obtained by The Intercept show Jacobson consulting her husband on No Labels decision-making, and Penn himself executing strategy for No Labels campaigns. This past May, for instance, when discussing ad buys for the congressional race in Pennsylvania’s Lehigh Valley district (No Labels backed John Morganelli, an anti-choice, pro-Trump Democrat who lost the primary to Susan Wild), Jacobson looped her husband in on discussions and said, “Mark penn can you advise?” Penn was similarly asked to weigh in on ad spending and strategy on behalf of Rep. Dan Lipinski, D-Ill., whom No Labels backed in a primary race.

The Intercept confirmed the authenticity of the emails with three sources who previously worked with No Labels.

A lawsuit filed in September by the political consulting firm Applecart alleged that No Labels shorted them on millions of dollars, and terminated their relationship to hire consultants with financial ties to Jacobson and Penn. No Labels maintains that Applecart’s performance was unsatisfactory. Dan Webb, an attorney representing political organizations allied with No Labels, provided The Intercept a statement on behalf of the group. “No Labels is currently in litigation with Applecart, which limits what we can say at this time. Having botched their work for the PACs, Applecart is attempting to spin a false narrative in an effort to harm the PACs and No Labels,” he said.

No Labels has employed the services of Harris for polling and uses Victory Passport, an affiliate of Targeted Victory, for its online fundraising. Emails show SKDK’s Andrew Shipley and Bill Knapp also working with No Labels — and Penn directly — on television ads in the 2018 primary season, though SKDK maintains that the company did not work with No Labels on anything.

One email Shipley sent in March to Jacobson, Penn, and others has the subject line “Tentative Media Buy” and is addressed to “Mark and team.”

Another March email cited Shipley as having worked on a television ad for Lipinski, though Jacobson replied that “SKDK was conflicted out” — suggesting that Shipley had either stopped at some point or been removed at the beginning.

In an earlier exchange from February, Jacobson emailed Penn for his advice on how to spend money in the Lipinski race. “Do you have a position if we should spend more?”

“My position is you need to add cable from here to election,” Penn told her.

Jacobson responded by saying that No Labels currently had no plans for cable, but she brought other members of the team into the email exchange to ask if they could trim their budgets so that Penn’s strategy could be executed.

Two days later, emails between Jacobson, Penn, and Knapp show Knapp explaining that SKDK couldn’t work on an ad for Lipinski because his company had clients on the other side of the contest: NARAL and Planned Parenthood were major SKDK clients backing primary challenger Marie Newman. Human Rights Campaign was also heavily involved in backing Newman and has been a client of SKDK.

He offered to refer the work to a separate consulting firm, 2k Strategies, owned by a former SKDK employee, but remain involved. “I would/could be on a first organizing call and will bird dog the creative to make sure it’s right,” Knapp told them on February 26.

Penn clearly believed that he was working with Knapp on the Lipinski project. Later that day, he emailed Jacobson, “Tomorrow cleared to get the ad done with bills [sic] team.”

By March 3, things were moving, and No Labels had budgeted $408,000 for an ad buy, which Knapp, with Shipley copied on the chain, was put in charge of placing. “You are scoping the buy and I’ll then decide who to use based on which one I like better,” Penn wrote to Knapp.

On March 5, Shipley wrote back to “Mark and team” with the news that “we had to go with a new buyer since two of our buyers are conflicted out between the race [and] the IE.”

Shipley on March 7 noted that a $21,000 bill for work to Penn and Jacobson was on its way. “And we have a production bill coming shortly for about 21k,” he wrote.

Knapp told The Intercept that he offered to help as a volunteer and did so by connecting Jacobson to a different media consultant. “We decided as a firm to not work for Lapinski  [sic] directly or through any third party organization/group,” he wrote in an email. “We also long ago decided as a firm not work [sic] for No Labels. Nancy is a long time friend and I sometimes look at scripts and help her, but I don’t work for her organization. We didn’t work on the race as a firm, we did not produce an ad for Lapinski [sic] and we have never worked for No Labels.” He said that the vendor erroneously sent the invoice to SKDK, so Shipley simply forwarded it to No Labels, but no money changed hands.

Newman’s challenge to Lipinski — who is anti-choice, opposed to marriage equality, hostile to immigration, and against a $15 an hour minimum wage — was the first high-profile insurgent primary of the 2018 cycle, and she had the broad support of major progressive groups. No Labels spent more than $1 million and made the difference in the race, in the assessment of operatives who worked on both sides. On Election Day on March 21, Lipinski narrowly beat Newman by just over 2,000 votes.

Officials with SKDK also got involved in the Pennsylvania race. An email on May 7 shows Shipley working on a No Labels ad for that contest, with Shipley writing, “We are working on the edit and graphics and plan to have something to share later this afternoon. In terms of a voiceover, do you have a preference of male versus female. My original thinking was going with the white male.”

Later that day, Shipley forwarded a script to No Labels. “Can we confirm this being [sic] paid for by United for Progress,” he asked, referring to a No Labels Super PAC. A No Labels consultant replied that, in fact, it was being funded by a different one, called “United Together.”

Shipley did not return a request for comment, but Knapp said that Shipley shared with him The Intercept’s inquiry and that SKDK did not work on the Pennsylvania race. “Ship knows Nancy and connected the media consultant with our production facilities and Shipley helped coordinate that,” Knapp said. “My recollection was it was a positive ad. Again, we didn’t do the race and did not make money doing the race.”

Additional emails and documents reviewed by The Intercept point to other potential conflicts of interest involving No Labels and Penn’s Stagwell Group.

In August 2017, Jacobson sent an email to No Labels staff, saying, “For republican races would like to use targeted victory.” Targeted Victory is the firm part-owned by Penn’s Stagwell Group.

On April 10, 2018, back when No Labels was still working with Applecart, Jacobson sent an email to an Applecart consultant, copying Targeted Victory CEO Zac Moffatt and wrote, “Matt you are using targeted victory for digital ads for Republicans right?”

And in late March, according to an email reviewed by The Intercept, a representative for a No Labels donor expressed concern over the organization having “perceived or potential” conflicts of interest. They urged Jacobson to disclose potential conflicts to the No Labels governing board. “We believe that all Governing Board members need to be aware of the situation in order to prevent any misunderstanding and confusion going forward,” they wrote.

No Labels then worked to prepare a list of potential conflicts. In an email dated April 13, Jacobson noted that No Labels is “no longer using targeted victory” and suggested leaving that company off its disclosure list. “Why open the door?” she asked.

In a memo prepared for the No Labels’s governing board, the group outlines business it did with Marlin Strategies, which is run by a former SKDK staffer, and Schule Media, which was referred to No Labels by SKDK. The memo says, “Mark Penn wrote and advised on the [Marlin Strategies] TV ad” but “did so pro bono.” With regards to Targeted Victory, No Labels disclosed just that the company worked on the Lipinski race.

The memo also listed business No Labels did with Rising Tide Interactive, a Democratic digital advertising firm founded by Eli Kaplan, the fiancé (and now husband) of No Labels’ vice president and chief of staff, Sasha Borowsky. Borowsky worked at No Labels from 2012 until this past October.

Mark Penn did not respond to questions about the specific nature of the work he has done for No Labels on a paid or unpaid basis, and whether he has recommended that No Labels work with any companies in which he has a vested financial interest.