Why Won’t Mitch McConnell Just End Trump’s Shutdown? He’s Up for Re-Election in 2020

Mitch McConnell could easily round up the support needed to reopen the government. But doing so might cost him in 2020. So here we all sit. 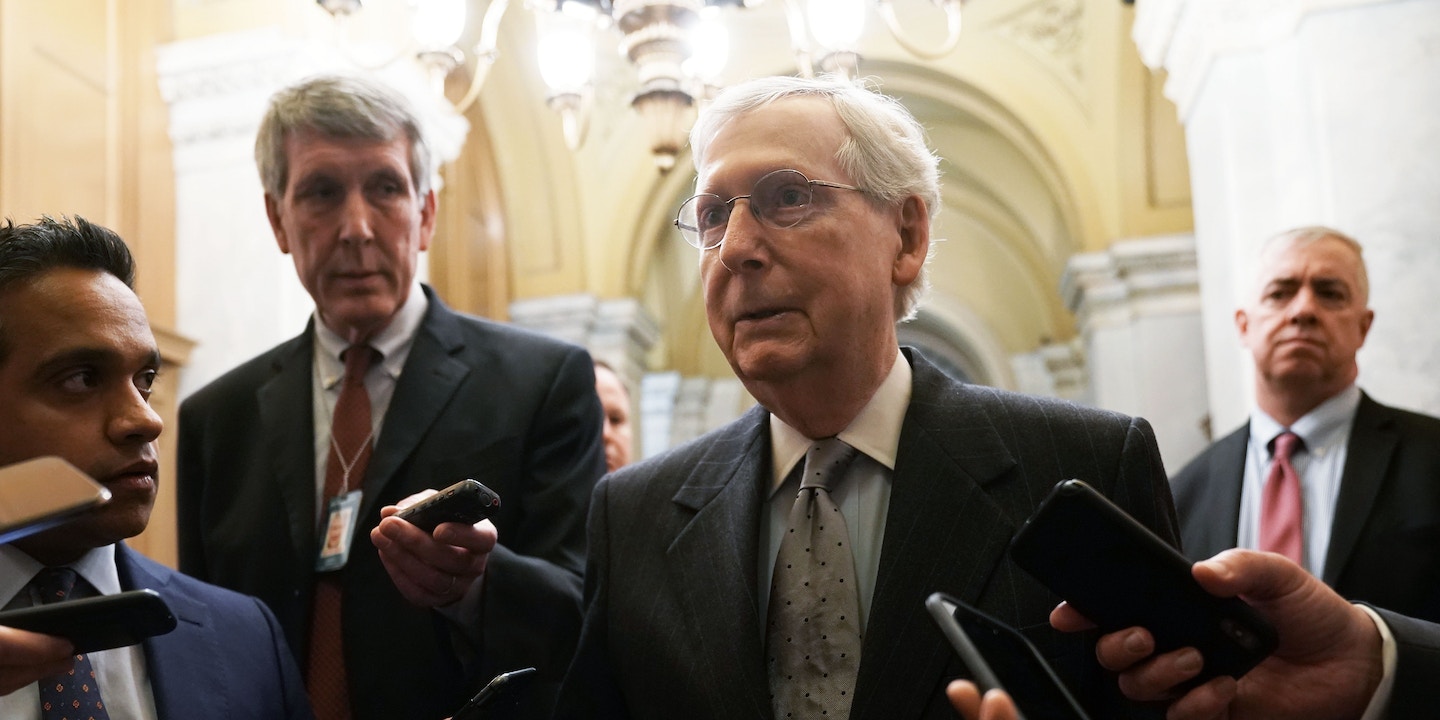 South Carolina Republican Sen. Lindsey Graham’s call for a short-term deal to reopen the government while continuing negotiations on border security means that there is now a working majority in the Senate publicly willing to vote to end the shutdown. Fellow Republican Sens. Susan Collins, Cory Gardner, and Lisa Murkowski have all urged passage of bipartisan appropriations bills that would bring nearly 800,000 federal employees back to work. Add Graham and all the Senate Democrats, and you have 51 votes.

Back in December, the Senate passed its bill to keep the government open by voice vote, which is recorded as unanimous. That was before President Donald Trump changed his mind and said he would refuse to sign the bills.

The House is now run by Democrats who have already passed legislation to reopen the government. House Republicans are cracking too: The most recent appropriations bill passed for the Department of the Interior earned 10 Republican votes, inching closer to supermajority support. So it’s reasonable to suggest that, under the surface, there may be enough support for the Graham option to override a presidential veto.

This means that one of the main impediments to ending the shutdown is not Trump but Senate Majority Leader Mitch McConnell, who has quietly aligned with Trump since the shutdown began. All McConnell would have to do to open the government would be to put the same bill that the Senate already passed back on the floor.

Yet McConnell has been adamant that he would not put anything up for a vote in the Senate that the president wouldn’t sign, making numerous speeches on the Senate floor on the subject. He has steered clear of negotiations to end the shutdown, now in its fourth week. He rejected a compromise proposal from his own caucus to consider exchanging protections for Dreamers for wall funding.

Democrats have bashed McConnell for abdicating responsibility by refusing to line up votes, but he has not budged. The big question is this: Why has McConnell, whose primary motivation has always been protecting Senate Republicans from negative publicity, hung his fellow senators out to dry on the unpopular shutdown and opened them up to widespread criticism?

It’s true that McConnell cares deeply about the electoral fates of his GOP colleagues. But he also cares about his own. And Mitch McConnell is up for re-election in 2020.

McConnell’s major problem is that, in Kentucky and across the country, he is not particularly likable. He is among the most unpopular of America’s senators, with just a 38 percent approval rating, according to the most recent poll from Morning Consult. That’s actually an improvement over last year, when McConnell ranked as the most unpopular. But that’s still well below Trump’s 55 percent approval in Kentucky, per the same polling outlet.

In 2017, after McConnell publicly clashed with Trump, a poll put the majority leader’s approval rating in Kentucky at 18 percent. Just 37 percent said they’d like to see him re-elected in 2020.

It’s probably the case that McConnell doesn’t fear losing to a Democrat in next year’s elections. Or, at least if he does, it’s a manageable fear — though, the longer he drags out an unpopular shutdown, the more conceivable it becomes. But overriding a Trump veto, crossing him in such a public way, could bolster a primary challenge.

And Trump’s ability to pull McConnell’s stature up in a state like Kentucky was evidenced in the last Congress. McConnell was much further underwater in Kentucky last summer, finishing dead last in popularity among senators, with 30 percent support and 56 percent disapproval. His numbers only started to turn around when Brett Kavanaugh was nominated to the Supreme Court and McConnell made sure that he was confirmed, regardless of the controversy over sexual assault allegations. McConnell has raised his net approval by 17 points since last summer, mainly by sticking to Trump like glue.

It’s true that a political crisis 22 months before the next election would typically not register with voters. But this is no ordinary crisis: It involves the border wall, the signature proposal on which Trump has staked his political career. If McConnell were to undercut the president on the wall, constituents in Kentucky might not forget. Or Trump might not let them. And the primary takes place in May 2020, six months closer than next November.

On Monday, The Intercept asked senators if they thought McConnell’s re-election played a role in setting the Senate strategy. “No, I think that Senator McConnell has rightly determined that in order for this to end, and for this to get resolved, that the president and the Democrats have to come to an agreement,” said Sen. John Thune of South Dakota, a member of GOP leadership. “He’ll be more than happy to bring something to the floor that can get 60 votes in the Senate and a presidential signature. I think it’s pretty straightforward.”

Sen. Marco Rubio, R-Fla., said that McConnell was waiting for Trump to tell him what he’ll accept. “No, I think it has to do with — the Senate passed a bill and then the White House said they were open to [it] and then they changed their mind the next day,” he said. “Ultimately there’s no bill we can pass that will become law unless the president signs it. So I think he’s just waiting for the White House to tell us what they would support. And I think he would put to a vote virtually anything they would support.” (As a matter of civics, Congress can enact a law by overriding a presidential veto, with two-thirds of the votes in both chambers. That’s the move McConnell is resisting.)

The White House has endorsed McConnell’s subordinate approach and has broadcasted its appreciation. “Leader McConnell is standing strong,” Vice President Mike Pence told reporters last week. “Republicans are standing rock solid with the president, and Leader McConnell is right there with them.”

The shutdown has begun to take its toll on more and more of the country, from workers to small businesses. The political costs will only rise as it continues, and this public pressure usually leads to one side giving in. But the leader of one of the chambers of Congress has his political future directly tied to remaining obstinate, regardless of whether that will damage the party overall. This is sometimes called the iron law of institutions, which states that those who control institutions care primarily about their own power within the institution, rather than the power of the institution itself.

It’s one thing to deal with the wild mood swings and irrationality of Trump during the shutdown. But McConnell is acting as Trump’s clone in the Senate. Sometimes an upcoming re-election will make a politician moderate their views. But McConnell knows, whether he likes it or not, that the modern Republican Party is a party of Trump, and if he wants to return to the Senate, he cannot let a sliver of daylight come between him and his president.

Asked if McConnell was still committed to his position, and whether his own re-election factored into his decision-making, McConnell spokesperson Don Stewart told The Intercept, “If he issues a new position, I’ll send it your way.”