The Supreme Court Will Decide if Census Citizenship Question Is Legal. Democrats Should Also Work to Block It.

House Democrats should use their oversight power to expose the Trump administration’s nefarious reasons for asking about citizenship on the 2020 census. 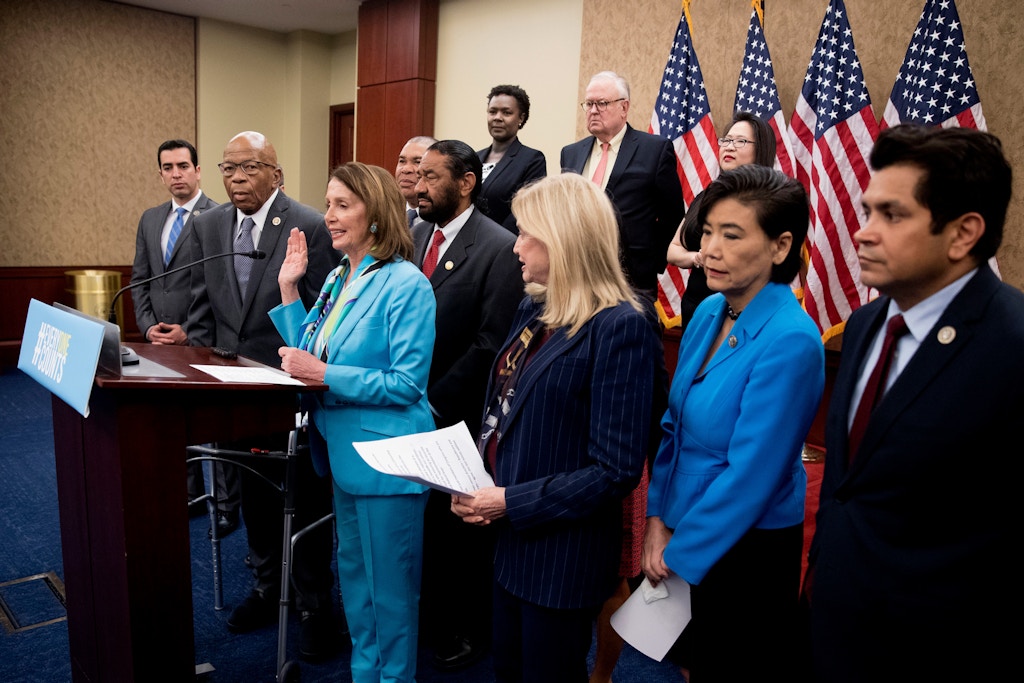 House Minority Leader Nancy Pelosi speaks at a news conference on the decision to add a new citizenship question on the 2020 Census in Washington D.C., on May 8, 2018.

In a closed-door meeting Friday morning, the Supreme Court voted to fast-track review a lower court ruling that would have prevented the Trump administration from asking about citizenship on the 2020 census. Arguments in the case, the outcome of which could affect the balance of political and economic power in this country for years to come, are scheduled for the week of April 22. The last time the high court granted such a petition for expedited review, which bypasses the appeals court, was in 2004.

“Granting cert before judgment here shouldn’t be seen as any reflection of how the Court is likely to rule on the merits,” said Steve Vladeck, a law professor at University of Texas. “It’s just a sign that the Justices all understand the need to decide the matter, one way or the other, by June.” The census questionnaire must be finalized by June 30, census officials say, in order to start printing paper forms on time.

Democrats have an opportunity, and a moral responsibility, to push for answers on why the Trump administration is so keen to include the question.

The legal showdown over the census has been brewing since March 2018, when Commerce Secretary Wilbur Ross announced that the decennial enumeration of adult and child in America would — for the first time in 70 years — ask about immigration status. The move was quickly condemned by census experts and advocates as a politically motivated effort to undermine the accuracy of the count by discouraging immigrants and their families from participating. Led by New York, 18 states, several cities, and civil rights groups sued the Commerce Department, which oversees the Census Bureau, to block the question.

Now, as the legal proceedings move forward, Democrats, with their oversight power in the House of Representatives, have an opportunity, and a moral responsibility, to push for answers on why the Trump administration is so keen to include it.

As it stands, the 2020 questionnaire either will or will not ask every person in America whether they are U.S. citizens. In the balance between those two outcomes hang billions of dollars in desperately needed federal aid for poor, urban, and minority communities; a legislative map that could be drawn to favor white, conservative districts; and the question of whether America will continue its descent toward white minority rule.

“Final census preparations and grassroots ‘get out the count’ efforts are unfolding amidst great uncertainty,” Terri Ann Lowenthal, who was staff director of the House census oversight subcommittee from 1987 to 1994, told The Intercept, “making it hard to reassure fearful communities that it is safe to answer the census.”

Former Census Bureau Director Ken Prewitt concurred. “The census arrives in less than a year, when Alaska is enumerated and media campaign launched. And its schedule is relentless,” said Prewitt, who is now a professor at Columbia University. “The citizenship question hangs there, and distract from many other things that need attention. One way or the other, [the Supreme Court] needs to erase this uncertainty.”

If Democrats want to prevent this manmade catastrophe, they don’t have to wait and see what the Supreme Court decides.

Through hearings in the House, Democrats can work to further expose the Trump administration’s nefarious intentions. Ross, who evaded giving testimony in the New York case, will appear before the House Oversight Committee on March 14. Chair Elijah Cummings, a Maryland Democrat, has said that investigating the administration’s reasoning for adding the citizenship question would be an oversight priority. “To be frank with you, we have been told some untruths,” Cummings said in November.

Meanwhile, the chair of the subcommittee overseeing the Census Bureau, Jamie Raskin of Maryland, told Bethesda Beat, “We would like to put the nail in the coffin for the ill-fated citizenship question.”

Another route is through legislation. There are now two stand-alone bills in the House and Senate that would effectively prohibit a citizenship question on next year’s census. The 2020 Census IDEA Act, sponsored by Rep. Carolyn Maloney and Sen. Brian Schatz, prohibits changes to census design that have not been “researched, studied, and tested” for at least three years before the count. The Every Person Counts Act, sponsored by Sens. Bob Menendez and Catherine Cortez Masto, specifically prohibits census questions “eliciting any information regarding U.S citizenship or immigration status.”

Fifty-two House Democrats have co-sponsored the Census IDEA Act and 20 senators have sponsored the Every Person Counts Act. If House Speaker Nancy Pelosi rallies her caucus, it is possible that the 2020 Census IDEA Act could pass in the House, but passage in the Senate — and the president’s signature — is unlikely.

Another option would be to attach a census measure to a must-pass bill, like raising the debt ceiling, supplemental appropriations, or disaster relief. In November, House Democrats, led by New York Rep. José Serrano, sought to use the government funding showdown to block the citizenship question. House Democrats could add language to future appropriations bills blocking funding for a census questionnaire that includes the question.

Even if the chances of passage are low, a symbolic effort by Democrats would still be meaningful. “An undercount would result in leaving communities without vital resources, health care, and fair representation,” said Beth Lynk, Census Counts campaign director at the Leadership Conference Education Fund. “Congress must now step in to remove the citizenship question from the 2020 Census and ensure the Census Bureau gets sufficient resources, so that all communities are accurately and fairly counted.”

Census stakeholders were reassured last month when Judge Jesse Furman, who sits on the federal bench in New York, ruled that Ross’s decision to include the question constituted an “arbitrary and capricious” violation of the Administrative Procedure Act, which governs federal agency decision-making processes. In the decision that prompted the Trump administration’s appeal to the Supreme Court, Furman wrote that “hundreds of thousands — if not millions — of people will go uncounted in the census if the citizenship question is included.”

Furman’s decision “revealed how the Census has been manipulated to undermine this cornerstone of our democracy,” said Arturo Vargas, CEO of the NALEO Educational Fund, which works to get Latinos involved in the political process. “We hope the Supreme Court will be able to approach this matter with a keen sense of objectivity and respect for the Constitution’s requirement for a complete count of all persons.”

Prewitt, the former Census Bureau director, said he’s hopeful that the Supreme Court will affirm Furman’s ruling, likely on “narrow, technical” grounds. But even if that happens, he said, considerable damage has already been done. “The lost trust in the census will be hard to walk back,” Prewitt said.

The highly unusual 11th-hour test, Lowenthal said, confirms what stakeholders have been asserting for over a year: The Census Bureau added the citizenship question without having comprehensively tested its effect on response rates. The latest test won’t solve that problem, Lowenthal said. “It’s not broad enough to assess the full impact.” For example, the test will not capture any data about noncooperation during the door-to-door phase — when Census workers will come knocking.

Though the extent of the potential damage is unknown, experts agree that the outlook is not good. In a January 26 letter to Ross, the commerce secretary, six former Census Bureau directors, from both Republican and Democratic administrations, warned, “We believe that adding a citizenship question to the 2020 Census will considerably increase the risks to the 2020 enumeration.”

In a January 2018 memo to Ross, the Census Bureau’s own top scientist cautioned that adding the question would “harm the quality of the census count,” and would result in “substantially less accurate citizenship status data than are available from administrative sources.”

Beyond the politics, a citizenship question would cause real, material harm to young people, Latinos, Asians, and city-dwellers. These communities are more likely to be undercounted (even more so than they already tend to be) because they are more likely to live in households with noncitizens.

“An undercount would result in leaving communities without vital resources, health care, and fair representation.”

A more severe census undercount in these communities will impact have a devastating impact on federal aid. Congress allocates $675 billion in annual federal funds on the basis of census data. Medicaid distributes $312 billion; the Supplemental Nutrition Assistance Program, formerly known as the Food Stamp Program, distributes $69.5 billion; Medicare Part B distributes $64.2 billion; and Section 8 housing distributes $38.3 billion. By undercounting undocumented immigrants and sewing fear in their families, the Trump administration will redirect federal funding away from the neediest. And because the census is used to apportion congressional seats and statehouse districts, undercounted populations will be further disenfranchised and left more unable to rectify these harms.

Punishing poor and brown communities in this way is not an unintended side effect of the administration’s approach to the decennial count; it’s the purpose.

Furman, in his ruling, declined to decide whether the citizenship question was designed to discriminate against noncitizens, but documents revealed during the trial suggest a deliberate plot by nativist Trump officials to sabotage the count.

Ross claimed that the decision to add a citizenship question was prompted by a December 2017 request from the Justice Department, which claimed to want better data for enforcing the Voting Rights Act. But emails reveal that months before the Justice Department request, Ross discussed the citizenship question with former Kansas Secretary of State Kris Kobach — who briefly helmed a controversial “voter fraud” commission — and former Trump adviser Steve Bannon months before the DOJ request. In his ruling, Furman said the Commerce Department used DOJ to “launder” and “obtain cover for a decision they had already made.”

The absence of a citizenship question on the census “leads to the problem that aliens who do not actually ‘reside’ in the United States are still counted for congressional apportionment purposes,” Kobach wrote in a July 2017 email to Ross. The Justice Department later admitted that the conversation between Kobach and Ross was arranged by Bannon.

Justin Levitt, a former Justice Department civil rights overseer, told me last year that there is no valid voting rights reason for including a citizenship question on the census.

Levitt said, “These emails suggest that the Commerce Department’s rationale was, to use a technical term, horseshit.”