Records show the One Country Project’s website is registered to an executive at Forbes Tate Partners, a lobbying and PR firm battling Medicare for All. 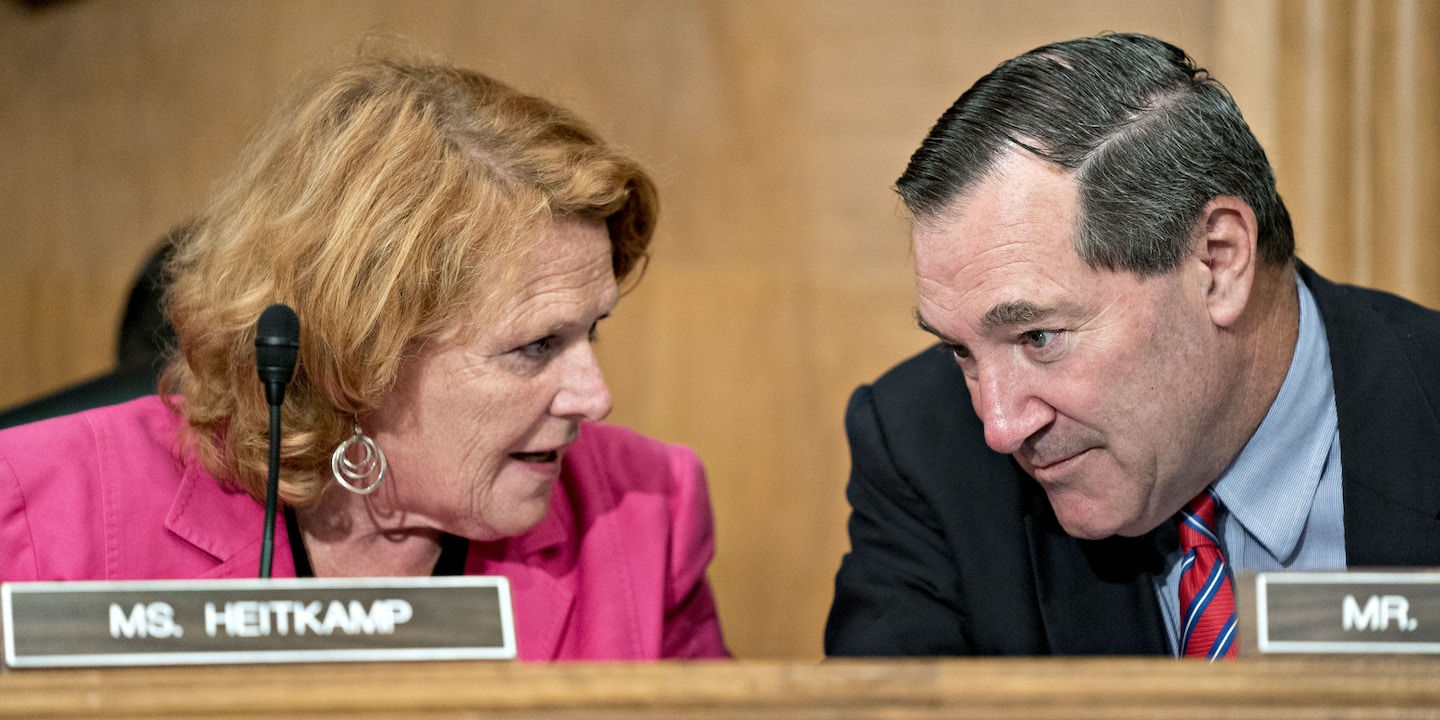 A dark-money organization designed to help Democrats win rural votes in 2020 is getting support from anti-Medicare for All forces — and pushing their message with a pair of former Democratic senators.

Last month, former Sens. Heidi Heitkamp, D-N.D., and Joe Donnelly, D-Ind., announced the launch of the One Country Project, a 501(c)(4) nonprofit, to bring rural voters back to the Democratic Party. The group has already started working with the Democratic National Committee, according to Axios. Time Magazine reported that Heitkamp is using “leftover campaign funds” for the project.

Records show that the One Country Project’s website is registered to an executive at Forbes Tate Partners, a lobbying and public relations firm founded by former Clinton administration officials. The lobbying firm is leading the Partnership for America’s Health Care Future, or PAHCF, the health industry-backed nonprofit created to crush momentum for a comprehensive universal health care system.

Heitkamp has used the launch of the One Country Project as an opportunity to speak out against Medicare for All. “Polling indicates that most Americans are satisfied with the health care they receive and do not want their coverage options taken away and replaced with a one-size-fits-all government program,” she wrote in a Washington Post op-ed last week that echoed PAHCF talking points.

Donnelly and Heitkamp both campaigned against Medicare for All during their failed re-election bids, even though polling by Data for Progress and the Kaiser Family Foundation last year found that 55 percent of Democratic voters in Indiana and 51 percent in North Dakota support Medicare for All. Heitkamp lost her 2018 race by 11 points, Donnelly by almost 6.

The One Country Project’s website is registered to Elizabeth Gonzalez, the director of operations and development at Forbes Tate. Lauren Crawford Shaver, a Forbes Tate partner who worked on Hillary Clinton’s 2016 campaign, is PAHCF’s executive director and has been the group’s public face. Forbes Tate formally registered to lobby for PAHCF last month.

Heitkamp, Donnelly, the One Country Project, and Forbes Tate did not respond to questions from MapLight.

.@HeidiHeitkamp cautions her fellow Democrats: Medicare for all would cause serious harm to Americans’ quality of care and their wallets. Read more via @washingtonpost @PostOpinions: https://t.co/SKzriF01UL pic.twitter.com/MSz9qTRHex

Forbes Tate has close ties to moderate Democratic lawmakers. Libby Greer, a partner at the firm who’s lobbying for PAHCF, has served on the board of directors of Center Forward, a centrist think tank. Last month, Greer, as The Intercept reported, led a health care policy conversation at a luxury retreat that Center Forward hosted for senior congressional staffers. In 2017, Center Forward received almost $1.2 million from Pharmaceutical Research and Manufacturers of America, or PhRMA, drugmakers’ top trade organization in Washington, D.C.

Heitkamp’s unsuccessful campaign paid $166,000 last year to Columbia Campaign Group, a Forbes Tate subsidiary, for polling and media consulting. In March, the lobbying firm hired her former chief of staff, Tessa Gould, as a partner. The firm said that Gould would “lead on client strategy across a variety of industries, utilizing her leadership and campaign experience, specifically her understanding of rural and moderate political dynamics as part of the broader national conversation.”

The firm’s press release announcing Gould’s hiring featured praise from Heitkamp. “There are few people I trust more than Tessa,” she said. “The combination of her leadership abilities, political savvy, and deep policy knowledge made her an invaluable member of my team, and I am certain she will be a welcomed addition at Forbes Tate Partners.”

The Heitkamp campaign paid $35,000 to Gould in early March for consulting. The former senator still had more than $6 million in her campaign account at the end of March, the byproduct of the online fundraising windfall she saw in October after she voted against Supreme Court Justice Brett Kavanaugh’s confirmation.

Donnelly recently joined Akin Gump Strauss Hauer & Feld LLP, a Washington, D.C.-based law and lobbying firm that also has ties to the anti-Medicare for All effort. The firm announced that Donnelly will advise clients in the health care industry.

Akin Gump has lobbied for a number of trade organizations that belong to PAHCF, including PhRMA; the Biotechnology Innovation Organization, which also represents drugmakers; and the Healthcare Leadership Council, which represents health insurance, pharmaceutical, and hospital interests.