Three months after her appointment as chief of the Border Patrol, Carla Provost posted in the “I’m 10-15” Facebook group. 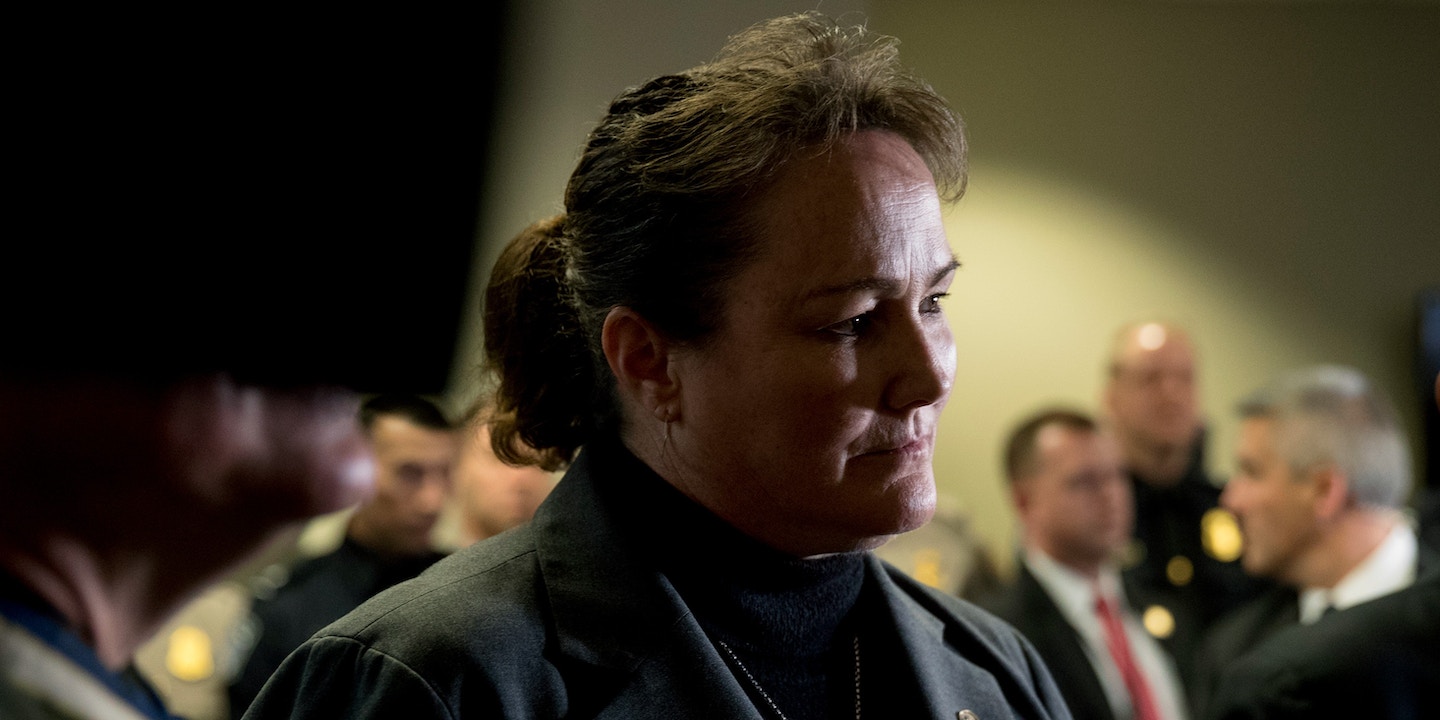 When news broke that thousands of current and former Border Patrol agents were members of a secret Facebook group filled with racist, vulgar, and sexist content, Carla Provost, chief of the agency, was quick to respond. “These posts are completely inappropriate and contrary to the honor and integrity I see — and expect — from our agents day in and day out,” Provost said in a statement. “Any employees found to have violated our standards of conduct will be held accountable.”

For Provost, a veteran of the Border Patrol who was named head of the agency in August 2018, the group’s existence and content should have come as no surprise. Three months after her appointment to chief, Provost herself had posted in the group, then known as “I’m 10-15,” now archived as “America First X 2.” Provost’s comment was innocuous — a friendly clapback against a group member who questioned her rise to the top of the Border Patrol — but her participation in the group, which she has since left, raises serious questions. Provost is one of several Border Patrol supervisors The Intercept has identified as current or former participants in the secret Facebook group, including chief patrol agents overseeing whole Border Patrol sectors; multiple patrol agents in charge of individual stations; and ranking officials in the Border Patrol’s union, who have enjoyed direct access to President Donald Trump. (It is technically possible that someone else posted in the group using the individuals’ accounts.) The group’s existence has already generated at least two investigations from lawmakers and internal Department of Homeland Security oversight bodies.

“This is why I have requested a full investigation into this matter,” Thompson said in a statement to The Intercept, after being informed of Provost’s participation in the group. “We need to know who in CBP leadership knew about these deplorable groups, when did they find out, and what action they took, if anything.”

Customs and Border Protection, the agency that oversees the Border Patrol, did not dispute that Provost and other senior agents had commented in the group. Provost did not respond to a request for comment. In a statement, CBP said its Office of Professional Responsibility “is investigating the material provided to CBP this week from multiple sources.”

“CBP does not tolerate misconduct on or off duty and will hold those who violate our code of conduct accountable,” the statement said. “Several CBP employees have received cease and desist letters and several of those have been placed on administrative duties pending the results of the investigation. These posts do not reflect the core values of the Agency and do not reflect the vast majority of employees who conduct themselves professionally and honorably every day, on and off duty.”

ProPublica was first to report the existence of the secret Border Patrol group on July 1, revealing that members used the page to joke about migrant deaths and share sexually violent and threatening posts about several Democratic lawmakers, including, in particular, Rep. Alexandria Ocasio Cortez, D-N.Y. Politico followed up by reporting that senior officials in the Border Patrol, as well as CBP public affairs officials, had known about the group for years and used it as an “intelligence” stream to monitor the sentiment of the workforce. The Intercept then reported that the public revelations sparked an internal purging of the Facebook group’s content, but not before we archived hundreds of posts shared over multiple weeks.

CBP’s press office disputed reporting that it had monitored the group. “While the Agency has taken appropriate action to review, investigate, and caution employees about inappropriate posts brought to our attention, the Agency does not restrict employees from affiliating through social media groups,” a spokesperson told The Intercept in an email. “Further, contrary to previous media reports, CBP’s Office of Public Affairs does not continuously monitor the personal use of social media by CBP employees.”

Evidence of Provost’s participation in the secret Border Patrol group comes as Ocasio-Cortez, along with Rep. Veronica Escobar, D-Texas;, Rep. Rashida Tlaib, D-Mich.; and Rep. Ayanna Pressley, D-Mass., head into a hearing with the Committee on Oversight and Reform and the inspectors general of DHS and the Department of Health and Human Services on Friday to discuss their recent visit to detention centers along the border.

As both ProPublica and The Intercept have reported, the lawmakers visit was a hot topic among “I’m 10-15” members, who discussed throwing burritos at the members of Congress or, in the case of one El Paso-based agent, staging a “bang in” to relieve stress from their presence. In a statement to the press Wednesday, Rep. Elijah E. Cummings, chair of the oversight committee, said the Facebook group would be a topic of discussion at the hearing. The Maryland Democrat has opened an investigation into the group and, in a letter to Mark Zuckerberg, requested that the Facebook executive see to it that his company “preserve all documents, communications, and other data related to the ‘I’m 10-15’ group” including “log files and metadata.”

Shortly after the Facebook group was revealed, CBP’s Office of Professional Responsibility issued a public statement, citing Provost, saying that it had alerted the DHS inspector general’s office and that an investigation had been launched. McAleenan later said that an unspecified number of individuals had been placed on “administrative duties” following the disclosures over the last week, while ABC News obtained an internal memo showing that CBP “was aware, as early as February 2018, of at least one private Facebook group that included ‘inappropriate and offensive posts’ by its personnel.”

Whether the group in question was “I’m 10-15” is unclear. As CNN reported last week, CBP employees have also participated in a group known as “The Real CBP Nation” that shared similar content to the Border Patrol group.

A CBP spokesperson told The Intercept that it “investigated and took action regarding specific inappropriate social media posts and associated individuals that the Agency was made aware of in 2016” and that OPR “distributed guidance to the workforce that warned CBP employees can be disciplined for inappropriate social media posts, including posts in private groups” in February 2018. As for current investigations, the spokesperson said, “Several employees have been placed on administrative duty (also known as restricted duty).”

“The cases are still being investigated. When the facts are ascertained in the investigative process, the report is reviewed to determine whether the case should be heard by the Agency’s Disciplinary Review Board or referred to local management for review under management’s disciplinary authority. We cannot comment on individual cases.”

Catering to current and former Border Patrol agents and other CBP employees, the “I’m 10-15” group had more than 9,500 members before being exposed. As of Friday morning, the number was a little over 4,000. Though efforts were made to remove recent disturbing content, much of the group’s past posts and comments sections remain intact, with the names of members who have left the group appearing in gray.

The names of three current chief patrol agents appeared in The Intercept’s search of the Border Patrol Facebook group, including Matthew Hudak, of the Big Bend sector, whose last post was on August 10, 2016; Rodney S. Scott, of the San Diego sector, who remains in the group and whose last post was on November 17, 2018; and Jason D. Owens, former deputy chief patrol agent for the Laredo, Texas, sector, who now oversees operations the Border Patrol’s Houlton sector in Maine. The Intercept additionally identified nine current or former group members whose names match current patrol agents in charge, or PAICs, of individual Border Patrol stations.

The names of Border Patrol union figures also appear in the group, including Hector Garza, who was among the first active-duty agency members to establish a relationship to then-candidate Trump in 2015, and Tucson chapter union head Art del Cueto, host of the Breitbart-sponsored Border Patrol union podcast “The Green Line” and frequent Fox News guest.

While posts shared by Border Patrol supervisors viewed by The Intercept were generally benign, that was not true in all cases.

By all indications, group member Thomas Hendricks was something of an edgy memelord in “I’m 10-15,” never cowering before the politically correct demands of so-called snowflakes. When Hendricks appeared to disappear from the group last summer, his stature and mystique grew, prompting “who is Tom Hendricks” and “we are all Tom Hendricks” style posts.

The truth, as ProPublica reported this week and as comments reviewed by The Intercept indicate, is that Hendricks appears to be a supervisor in the Border Patrol Calexico station with more than two decades on the job. He returned to “I’m 10-15” on June 21, posting “That’s right bitches. The masses have spoken and today democracy won. I have returned. To everyone who knows the real me and had my back I say thank you. To everyone else? This is what I have to say…”

Hendricks then included an image of a smirking Trump forcing Ocasio-Cortez’s face into his crotch by the back of her neck.

The post, which garnered more than 250 likes, was on the ProPublica website less than two weeks later.