While la junta and its supporters have painted the Puerto Rican government as financially irresponsible, the board itself is no paragon of fiscal restraint.

Embattled Puerto Rico Gov. Ricardo Rosselló announced his resignation July 24 amid massive protests on the island and around the world. A demonstration in the capital city of San Juan on Monday drew an estimated 1 million people — almost a third of the island’s total population — to protest a decadeslong economic crisis that peaked in the aftermath of Hurricane Maria. The unelected and Washington-appointed body now overseeing the island’s finances — the Fiscal Oversight and Management Board, called la junta by Puerto Ricans — may use a democratic explosion in Puerto Rico to further curtail its democracy. 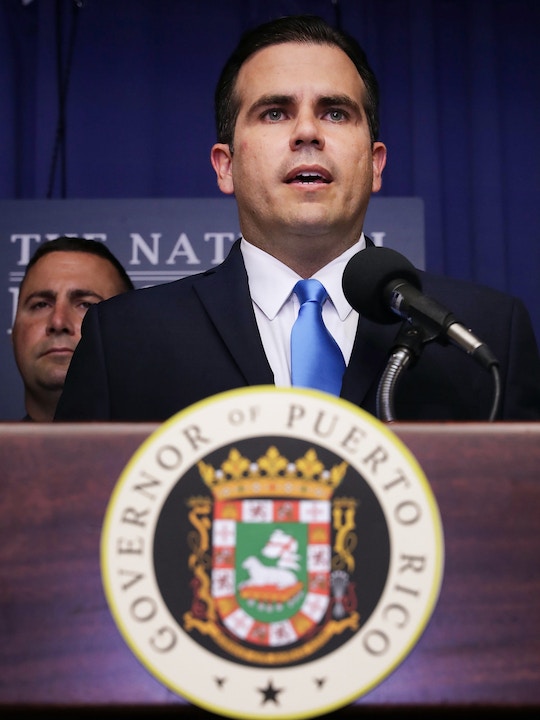 Gov. Ricardo Rosselló speaks during a news conference in Washington, D.C., on June 15, 2017.

For protesters, leaked Telegram chats, published by the Center for Investigative Journalism earlier this month, were the final straw after years of a painful recession and austerity measures imposed by la junta following the 2017 hurricane. In addition to the governor joking with his top staff about shooting San Juan mayor and gubernatorial candidate Carmen Yulín Cruz and calling former New York City Council Speaker Melissa Mark-Viverito a puta, or whore, the chats show that confidential information on government contracts and operations was being shared with ex-officials now working for corporate interests. Protesters erupted with anger over the fact that money which should have gone to hurricane recovery was being filtered toward lawyers and consultants close with the government.

Secretary of Justice Wanda Vázquez is next in line for Rosselló’s seat when he steps down on Aug. 2, although, as an unelected official, she likely won’t enjoy much popular support. (Puerto Rico’s Constitution doesn’t include any provision for a special election, instead handing the governor’s office down to Cabinet officials — many of whom have already resigned amid scandals.) One of Vázquez’s close allies, Valerie Rodríguez Erazo, is the wife of Elías Sánchez, a longtime friend of Rosselló’s who has profited handsomely from the governor’s time in office.

“We have people rising up and saying they want to have power to make their own decisions.”

Now many fear la junta will use these rolling legitimacy crises as ammo in an ongoing push to have Washington amend the oversight legislation to grant them broader authority, like the ability to veto measures passed through the island’s legislature. The Washington Post editorial board recently called for exactly that, writing that la junta’s “effectiveness has been hampered” and that “Congress should take steps to strengthen the board.” So far, presiding Judge Laura Taylor Swain, who is overseeing the bankruptcy proceeding, hasn’t accommodated board requests for more power, such as over day-to-day governance. And on July 24, at the urging of 60 civil society organizations and others, Swain ruled to put that legal process on hold for the next three months until the situation on the island is more stable.

As one popular chant goes, “¡Ricky renuncia y llévate a la junta!” or “Ricky resign and take la junta with you!”

Because Puerto Rico, unlike other municipalities, can’t declare bankruptcy, Congress passed the Puerto Rico Oversight, Management, and Economic Stability Act, or PROMESA, in 2016 to set up a bankruptcy-like procedure for the island, which is ongoing in the U.S. District Court for the Southern District of New York. PROMESA also handed broad authority over the island’s budget and finances to la junta, a group of officials appointed by the previous White House. The board includes Andrew Biggs — a resident scholar at conservative think tank American Enterprise Institute, former George W. Bush administration official, and longtime proponent of privatizing Social Security — and Carlos García, who in running Puerto Rico’s Government Development Bank helped engineer the debt he’s now tasked with reining in. The bank’s deals are underwritten by Santander, where he previously served as a top executive.

Another board member, Philadelphia-based lawyer David Skeel Jr., is one of the chief architects of emergency control regimes like the one now in place in Puerto Rico, as Simon Davis-Cohen pointed out in The Nation. These arrangements — which typically involve empowering appointed overseers who commandeer municipal finances, wresting power away from institutions like city councils — have been tested on the mostly nonwhite residents of Michigan and Atlantic City, New Jersey, resulting in fights over public services, pensions, and union contracts that outside appointees deem lavish expenses. In an influential 2016 Yale Law Journal paper, Skeel and co-author Clayton Gillette contend that “deep financial distress is emblematic of the failure of a city’s democratic processes. Displacement of those processes in an effort to restore the financial stability that a well-functioning democracy would pursue,” they add, “arguably is far less problematic than it might be with a city that is already providing the local public goods that localities are created to deliver.”

While la junta and its supporters have consistently painted Puerto Rican governments past and present as financially irresponsible, the board itself is no paragon of fiscal restraint.

La junta may be quietly trying to make the case that Puerto Rico’s democracy is in need of displacing. While having been relatively mum about recent events, the body released a statement on July 23 noting that “public outcry by residents of Puerto Rico over the last two weeks reflects a justified crisis of confidence in government institutions.” The board has not responded to The Intercept’s request for comment.

“I think they’re looking for an opening to take a larger role in terms of how Puerto Rico is run,” Sergio Marxuach, policy director at the Center for a New Economy, says of the oversight board. But, he notes, “They also suffer from a legitimacy problem. … People in Puerto Rico have lived through three very hard years” since PROMESA was enacted. “There have been austerity measures, programs have been cut, and schools have been closed. People have lost their jobs. There’s a lot of resentment against the board right now, but I think most of that anger is being channeled through the governor.”

And while la junta and its supporters have consistently painted Puerto Rican governments past and present as financially irresponsible — showering money onto outside consultants and spending beyond their means — the board itself is no paragon of fiscal restraint. One lawyer overseeing Title III bankruptcy negotiations invoiced the board $1.3 million in a single year. As of January, McKinsey and Co. had billed the board $72 million for its role in the restructuring process, and more than $1 billion is earmarked to be funneled to lawyers, bankers, and consultants in the coming years. Should the board get more authority — for instance, in overseeing the already botched disbursement of federal recovery dollars — that figure may well balloon, with Puerto Rican taxpayers footing the bill.

The House Natural Resources Committee has jurisdiction over PROMESA, and the Democratic leadership of the committee has been clear that it doesn’t support la junta exploiting the situation for its own benefit. As a video released by the committee yesterday put it, “Chair [Raúl] Grijalva has stated that [la junta] should not view this as an opportunity to amass more unelected power over the lives of the residents of Puerto Rico. The committee will be talking more about its plans for amending PROMESA in the very near future.”

Amid rumors of Rosselló’s (now confirmed) resignation, Grijalva said in a statement on Wednesday morning that the “Puerto Rican people, not the Oversight Board or a hostile Trump administration, must take the lead in determining what comes next.” (Grijalva has joined Reps. Nydia Velázquez, Alexandria Ocasio-Cortez, and Tulsi Gabbard in calling for the governor to step down.) A representative for the minority Republican members did not respond to a request for comment.

Asked about attempts on the committee to expand the PROMESA board’s authority, Grijalva said, “Not from our side.”

“We’re circulating a draft of what we think are basic reforms and changes to PROMESA,” he continued, calling for greater accountability. “The last thing you wanna do, you don’t want this to be an excuse to amass more power to the control board.”

Rep. Rob Bishop, R-Utah, confirmed that there were efforts on the committee to expand the board’s authority. “PROMESA board has enough authority right now. All they need is the government of Puerto Rico to work with them, not against them. That’s all we need to do.”

Bishop said expanding authority of the board would be “superfluous.”

“They have enough authority to do what they need to do now. The only problem they had was the inability of the territorial government to actually work with them,” he said. “If they just work with them — and that’s what irks me the most. Because Puerto Rico has still a massive amount of potential. They have all sorts of ability. It needs to be developed. … The government will never have enough money just to bail out Puerto Rico. We’ve got to get Puerto Rico once again to attract private sector funding. And that’s why the board is so essential.” An aerial view from a drone shows thousands of people filling the Expreso Las Américas highway, calling for the ouster of Gov. Ricardo Rosselló in San Juan, Puerto Rico, on July 22, 2019.

For protesters, it’s a tricky line to walk, much less to communicate beyond the island. “We’ve had corrupt governments and that is true. But you cannot evaluate the Puerto Rican government without looking at the constant and continued presence and intervention of the U.S. in Puerto Rico,” López Varona said. “The continued intervention of the U.S. hasn’t made life better for everyday Puerto Ricans. It’s made life better for people who are rich who can come to Puerto Rico and pay no taxes.”

“What we want to do,” López Varona added, “is to use the energy of the moment to bring forward demands that really move into a Puerto Rico that is for Puerto Ricans,” including protecting public services, auditing the debt, and declaring a state of emergency on gender violence. Within the next several months, it’s also possible that PROMESA board members will need to undergo Senate confirmations, following a ruling that they were appointed incorrectly. López Varona and others hope to leverage support in the diaspora to use any potential hearings to draw attention to the illegitimacy of the board as a whole, not just individual members.

“We are not asking for a better control board,” he tells me. “We are asking for investment in Puerto Rico. What we need is a Marshall Plan that invests money in the island and community-initiated programs that are overseen in Puerto Rico — a real process of self-determination that can help Puerto Rico pave its way to whatever it chooses.”

Update: July 25, 2019
This story has been updated to reflect Ricardo Rosselló’s resignation as governor of Puerto Rico late on July 24.