In the Tennessee Senate race, then-Rep. Marsha Blackburn ran targeted ads on immigration. She beat Phil Bredesen, a Democrat, who led the polls for months. 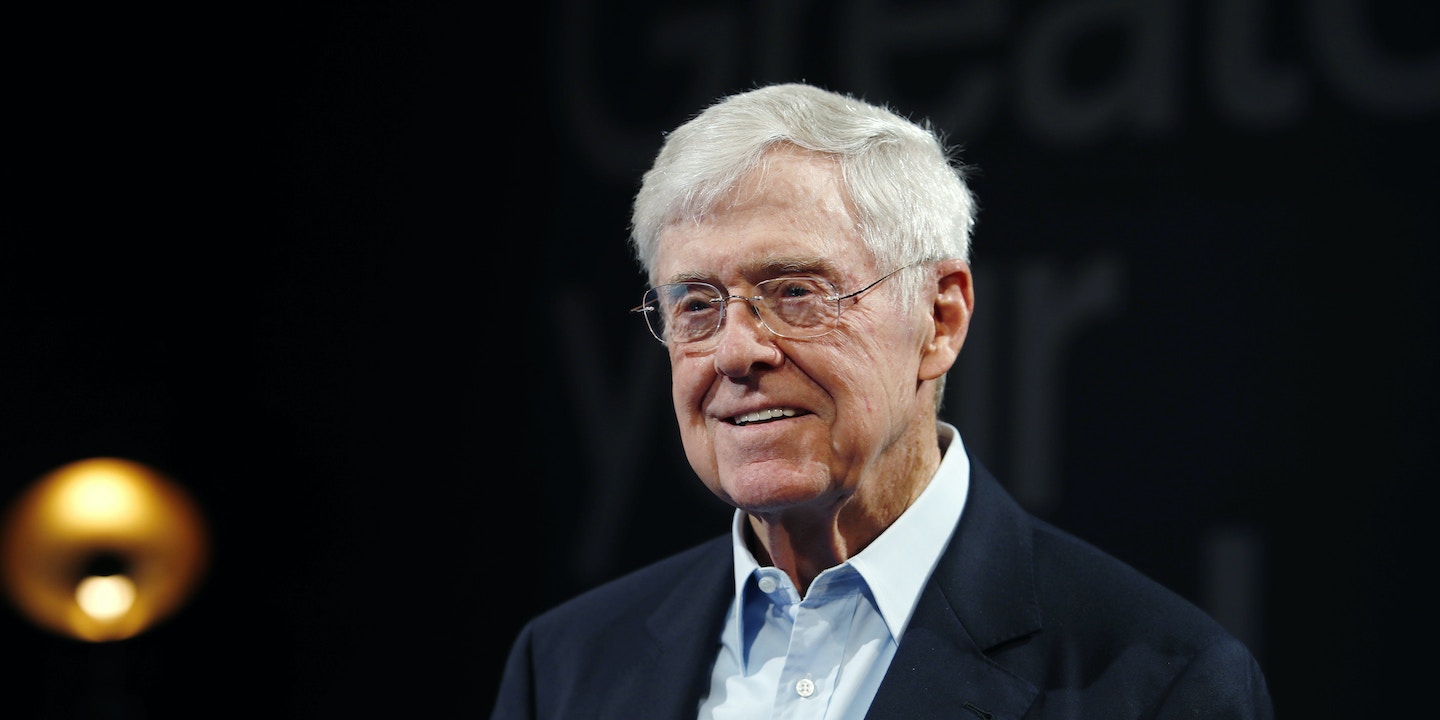 In recent years, Charles Koch, the billionaire industrialist megadonor to Republicans and libertarian causes, has carefully recalibrated his public image, releasing a variety of statements to assert that he supports immigration and opposes President Donald Trump’s blatant scapegoating of undocumented immigrants and foreigners.

At the same time, however, Koch’s sprawling political network’s in-house technology company has mined consumer data to motivate Republican voters with dehumanizing messages that depict immigrants as an invading army of criminals and potential terrorists.

Last year, when many GOP candidates across the country turned to vicious anti-immigrant advertisements to turn out voters in the midterm elections, some turned to i360, Koch’s state-of-the-art data analytics company. The company is one of the several appendages of the Koch political machine — one that includes a suite of voter outreach organization, lobbying, and campaign messaging tools.

Dozens of GOP candidates for state and federal office contracted with the Koch data company to identify voter segments and push out targeted ads on television and social media in 2018. And the company looks to be expanding its role in GOP campaigns going into 2020; more than a dozen federal candidates list the firm as a contractor.

The path to one Republican’s successful 2018 Senate run is detailed on i360’s website. Then-Tennessee Rep. Marsha Blackburn aired at least four different television advertisements and a wave of social media advertisements focused on immigration, often with false or inflammatory language. She ended up beating out Tennessee Gov. Phil Bredesen, a Democrat, who had been leading in the polls for months.

“A caravan of 14,000 illegal immigrants is marching on America … gang members, known criminals, people from the Middle East, possibly even terrorists,” intoned an ad for Blackburn, flashing images of Hispanic men and warning of a flood of immigrants welcomed by her Democratic opponent, Bredesen.

“Phil Bredesen gave driver’s licenses to illegal immigrants. Phil Bredesen opposes the Trump immigration ban,” declared another Blackburn ad. At one point, the ad displays an image of the Middle East and Africa.

The messages about the caravan were far-fetched given the fact that there is no evidence that the migrant caravan from Honduras contained any terrorists or members from the Middle East, as fact-checkers noted during the campaign. The driver’s license claim was also misleading: Tennessee briefly offered driver’s licenses to those without a Social Security number through a 2001 law signed by former Republican Gov. Don Sundquist. The law was later amended and repealed under Bredesen’s tenure as governor.

“It was Phil Bredesen who lured illegal immigrants to Tennessee,” other Blackburn advertisements on television and social media claimed.

“The invading force approaching our southern border is seeking to enter the country is wrong,” read a grammatically challenged paid advertisement on Facebook posted by the Blackburn campaign. Another promoted post from the Blackburn campaign decried the “illegal alien mob marching on our border.”

The Blackburn campaign turned to Koch’s i360 company to develop “a series of custom predictive models” to peel Republican voters away from Bredesen.

The ads, crude as they might have appeared, were distributed using an empirical approach to motivating Republican voters. The Blackburn campaign had turned to Koch’s i360 company to develop “a series of custom predictive models” to peel Republican voters away from Bredesen, according to a testimonial for potential clients.

Blackburn, a firebrand of the religious right who positioned herself as a steadfast ally to Trump and opponent of allowing Muslim refugees into the country, was clearly aligned with Koch priorities. Blackburn also supports judicial appointments favored by the business-friendly Federalist Society, corporate tax cuts, and scaling back most forms of environmental regulations, the criteria on which the Koch network has made its political endorsements historically.

Americans for Prosperity, the primary political advocacy arm of the Koch network, founded by Charles’s brother David, who passed away in August, and financed by Charles’s close-knit group of likeminded business owners, spent $5.6 million to support Blackburn’s Senate run through its nonprofit and Super PAC arm. That much is well reported and public. But the role of i360 in guiding the campaign’s anti-immigrant messages did not become clear until after the election.

The company segmented Republican supporters for Bredesen, a Democrat, using its vast database of voter profiles. The data suggested immigration could be used as a wedge. “From there,” the testimonial notes, “i360 further segmented the universe using the Sanctuary Cities model which identified voters likely to oppose Sanctuary City policies like allowing illegal immigrants to get drivers’ licenses — a policy Bredesen favored while Governor.”

The i360 database was integrated into the Blackburn campaign’s media strategy. The company’s television advertising service, i360 Rabbit Ears, allows campaigns to target television programs and schedules favored by various behavioral profiles. I360 sorts television programs by over 40 voter profiles, including anti-immigrant sentiment. The company refers to this voting bloc as: “Individuals who have a high likelihood of believing that undocumented immigrants should be required to leave the United States.”

Field staff used the i360 voter profiles to determine which messages to use when knocking on doors of potential voters and could show them “videos right from their iPads.”

Blackburn’s media consultants, through a company called Smart Media Group, not only relied on i360 data to inform its advertisement buying strategy, but its data findings were merged into Blackburn’s canvassing effort as well. Field staff used the i360 voter profiles to determine which messages to use when knocking on doors of potential voters and could “educate voters about Marsha’s positions by showing them videos right from their iPads.”

The i360 team also developed “140 unique segments,” an advertising term that refers to unique demographic profiles, “against which the campaign delivered millions of impressions across several different platforms including Google and Facebook.” The individual segments allowed the Blackburn campaign to send customized messages to each voter profile over a variety of platforms, a dynamic that allowed the campaign to “tailor their messaging to ensure they were talking about the issues that mattered to each voter.”

In the end, i360 boasts that the Blackburn campaign used its technology to shape 3 million voter contact calls, 1.5 million doors knocked, $8.4 million spent on television ads, and 314,000 campaign text messages — advocacy that led to Blackburn’s commanding victory over Bredesen, who had been favored in the polls for the months leading up to the election.

Federal Election Commission records show that Blackburn’s campaign paid $188,366 to i360 for a variety of services — a small price for the significant campaign services the company provided.

Founded in the aftermath of the 2012 election, in which Republican candidates favored by Koch fared poorly, i360 was envisioned as a way to revolutionize right-wing pressure campaigns and election efforts by incorporating the latest in data science. The company, based in the same Arlington, Virginia, office complex that houses other Koch groups, harvests troves of data to build profiles of every voter and potential voter in the country. Over the course of four years, the Koch network poured $50 million into i360 to develop its capabilities.

Journalist Sue Halperin noted that i360 acts as somewhat of a data broker, combining “commercial sources, such as shopping habits, credit status, homeownership, and religious affiliation, with voting histories, social media content, and any connections a voter might have had with advocacy groups or other campaigns” to build its voter database.

The i360 profiles offer a dizzying array of ways to segment voter preferences. The company allows GOP campaigns to target voters based on equity held in their home, likelihood that an individual has been personally affected by the heroin crisis, views on gay marriage, interest in dogs, levels of religious devotion, and even psychological profiles that measure an individual’s ego, based on previous purchases of monogrammed clothing.

Notably, according to CNET, i360 partners with D2 Media Sales, a joint venture with DirectTV and Dish, “‘to push TV ads to specific households that meet a candidate’s criteria ‘no matter which stations or programs they’re watching.'”

And the firm appears to still be a central cog in the Koch advocacy machine. Demeter Analytics Services, the holding company that owns i360, is listed as a subsidiary of the Seminar Network Chamber of Commerce, the nonprofit that serves as the central clearing house for the Koch political spending, in its most recent tax filing.

Media attention has swirled over the role of technology firms that have harnessed sophisticated targeting methods to influence campaigns. Billionaire hedge fund investor Robert Mercer, once a participant in the Koch network, split off and formed his own array of groups, including an effort to fund Cambridge Analytica’s 2016 targeting methods. Less scrutiny has been paid to i360’s role in shaping the political climate. Both firms vacuum up incredible amounts of data to develop personalized voter outreach methods, allowing campaigns to peer deeply into the hearts of voters and trigger emotional responses — a revolution in campaign strategy that gives well-heeled donors with access to the technology a tremendous advantage.

Over the last year, Charles Koch has stated his support for lofty, high-minded goals such as ending over-incarceration, scaling back America’s military empire, defending free speech, and providing legal status for undocumented youth. These laudable positions, however, have not translated to changing the behavior of his political advocacy apparatus.

The Intercept has previously reported on Koch’s financing of tough-on-crime advocacy and support for Congress’ most militaristic, surveillance-friendly lawmakers. That the Koch political operation also deliberately fine-tunes anti-immigrant messages further undermines Koch’s purported beliefs. Neither Blackburn nor Mark Holden, the Koch Industries executive who simultaneously helps manage the company’s political and philanthropic investments, responded to a request for comment.