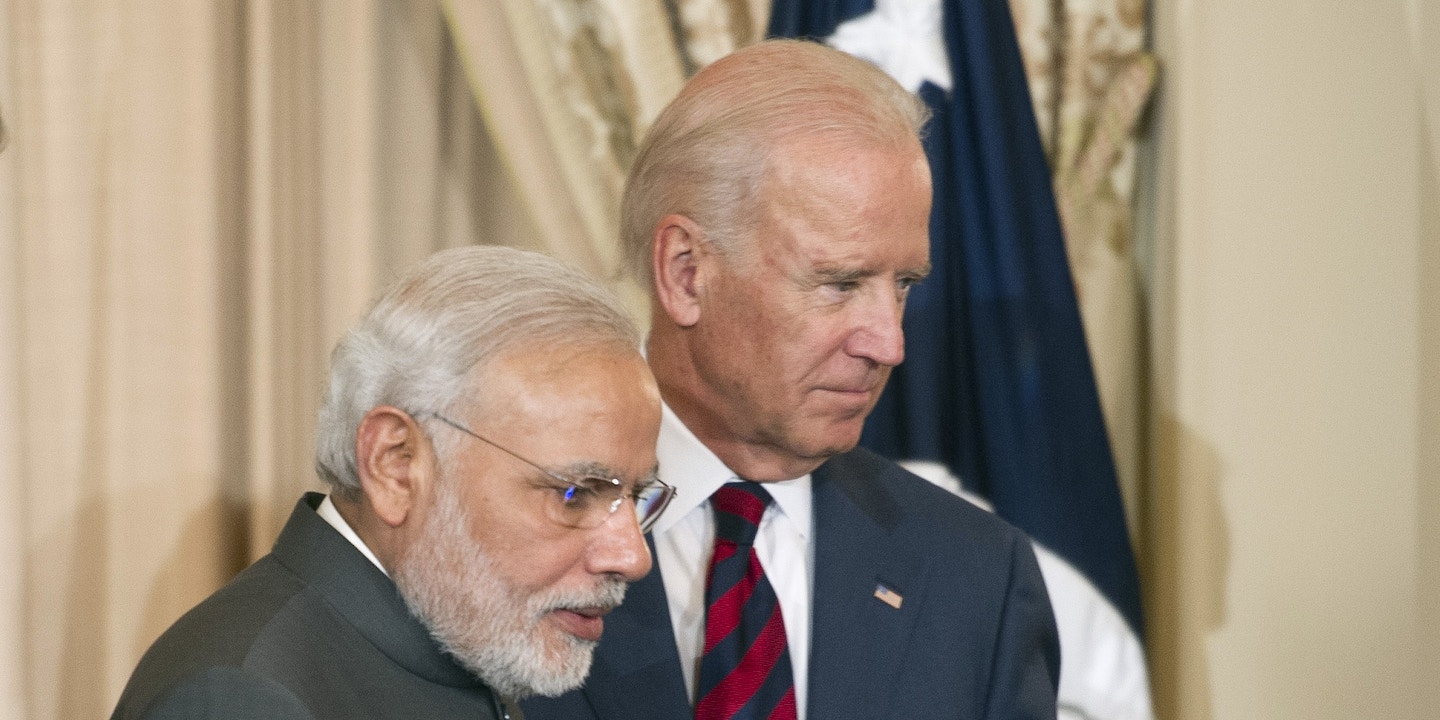 A new adviser to Joe Biden’s presidential campaign, the director of outreach to the Asian-American Pacific Islander community, is a strong backer of extreme right-wing Indian Prime Minister Narendra Modi.

Amit Jani took to Facebook in May to celebrate the authoritarian leader’s reelection.

In May, after Modi secured a second term as prime minister, Jani posted a collection of photos on Facebook and wrote, “Loved the energy and jubilation throughout the state on Prime Minister Narendra Modi’s victory in the Indian national elections! Proud of Deepti Jani for all the work you did during the campaign!”

On June 25, 2017, Deepti Jani posted a photo of Amit Jani with the Indian prime minister, apparently taken at the Ritz-Carlton hotel in McLean, Virginia, where the Indian diaspora had organized a “community reception” for Modi the day before his White House meeting with Donald Trump. The photo is captioned, “Amit Jani with Respected Prime Minister Narendra Modi.”

Modi has been a controversial figure on the international stage since at least 2002, when, as chief minister of the state of Gujarat, he oversaw mass violence against the minority Muslim population. For years, Modi was shunned by the West — and even banned from entering the United States — but he has made a comeback since his 2014 election as prime minister. Rep. Tulsi Gabbard, D-Hawaii, has been a consistent defender of the Indian premier in Washington, which includes advocating for a reversal of his visa ban. In 2014, President Barack Obama invited Modi to the White House. (Biden met with Modi at the State Department during that visit.)

Modi’s relationship with the West has thawed even as he and the BJP have taken India in an increasingly nationalist direction, guided by Hindutva — an ideology that views India as a Hindu nation, where adherents of other faiths are second-class citizens. Indeed, religious and ethnic minorities have faced increased discrimination in the five years since Modi entered office.

Biden’s hiring of a Modi supporter comes just weeks after the BJP revoked a constitutional provision that gave autonomy to Kashmir, the only Muslim-majority state in the country. Kashmir, which is considered one of the most militarized regions on Earth, has been under near-total lockdown since early August, with Indian forces using brute force against civilians. Additionally, a recent census in the northeastern state of Assam has led to more than 1.9 million people — most of them Muslim — being stripped of their Indian citizenship. The Indian government is building mass detention camps for these people, who have effectively been rendered stateless.

The Biden campaign did not respond to a request for comment.

Imraan Siddiqi, a civil rights activist and executive director of the Arizona chapter of the Council on American-Islamic Relations, said the timing of Biden’s hiring of Jani raises red flags.

“One would think that Modi and his ideology would be a pariah politically around the world.”

“As an Indian-American, who’s seeing the humanitarian crisis imposed on Kashmir by the Modi government — it is truly troubling to see Biden elevating someone who is in support of this now bordering on fascist regime in a leadership position,” said Siddiqi, who drew attention to Jani’s support for Modi on Twitter during Thursday’s Democratic presidential debate, in a written statement to The Intercept. “This week alone, 1.9 Million Indians were stripped of their citizenship in Assam — as well as prison camps being constructed by the Modi government. Add that to the ongoing far-right nationalist lynchings taking place across the country with impunity — one would think that Modi and his ideology would be a pariah politically around the world. But as we are seeing with Tulsi Gabbard and now Biden’s campaign — it appears that BJP/Hindutva politics is influencing both sides of the aisle in American politics.” (During his 2016 campaign, Trump courted Hindu nationalist voters in the United States.)

Democratic presidential contenders Sens. Bernie Sanders and Kamala Harris and former Rep. Beto O’Rourke have expressed concern about the recent unrest in Kashmir, but Biden has yet to publicly address the situation. Biden is the preferred candidate in the Democratic primary among Asian-American and Pacific Islander voters, who also named Sanders and Sen. Elizabeth Warren as favorites, according to a recent poll sponsored by AAPI Victory Fund, a political action committee, and Investingin.Us, a political group.

Amit Jani’s father, Suresh Jani, is one of the founders of the Overseas Friends of the BJP in the United States, a sister organization of India’s Hindu nationalist party that was founded, in part, to counter the negative international press the party was receiving.

The late Suresh Jani comes from the same village in Gujarat as Modi, and the two met at a gathering of the Rashtriya Swayamsevak Sangh, or RSS, a right-wing Indian paramilitary group that is considered the parent organization of the BJP, according to reports in the Indian press. Jani immigrated to the United States in 1987. Six years later, Modi visited the United States, where he stayed with Jani at his New Jersey home.

Suresh Jani relayed some of those experiences to Rediff, an Indian news website, in 2014.

“My mother liked Modi so much that when he was leaving, she blessed him and predicted that one day he would become a great man. She gifted Modi $51 as a shaghun (an auspicious symbolic gift). Around eight years later, when he was about to be sworn in as chief minister, Modi called and asked me to connect him with my mother. He said he still remembers the shaghun and her blessings. Then my mother told him ‘You will become bigger’,” he says.

Once, Jani remembers, they went to Lexington Avenue where many Indian restaurants are located. Modi preferred a North Indian restaurant. The waiter told them that the meal would cost $13 for 13 items.

When Jani was paying the bill, Modi went to the cash counter and said they were served three items less, so how could the restaurant charge the full amount without serving what was promised. So he got a discount of $6 on the bill. That amount Modi asked Jani to give the waiters as a tip. Then Modi advised Jani, ‘Never pay money in haste.’

In a 1993 photo provided by Suresh Jani to the Times of India, the two men stand side by side at John F. Kennedy International Airport in New York, with Modi holding a bouquet of flowers. Suresh Jani also welcomed Modi at the airport in 1997 and 2000, he told Rediff.

In 2001, Modi was appointed chief minister of Gujarat, and he was officially elected to the post in February 2002. Soon after, the state became engulfed in anti-Muslim violence. Modi was widely blamed for not doing enough to stop the pogrom, if not actually sanctioning it. A special investigation team in India eventually found that there was not enough evidence to prosecute Modi for his involvement, but there was enough circumstantial evidence to turn him into a political pariah in the West. That was not enough to change Suresh Jani’s opinion of the Indian politician; indeed, it was in 2014, after the United States reversed its travel ban against Modi, that Suresh Jani gave fawning interviews to the Indian press about Modi’s past visits to the U.S.

Amit Jani made a nod to his father’s involvement in Indian politics in a recent Facebook post, in which he posted photos from an event at which he was apparently recognized “on behalf of New Jersey Leadership Program, as well as my father’s contributions to Indian politics.”