Democratic Candidates Fail to Impress Workers Who Are Dissatisfied With Trump

The mood among the workers at the Philadelphia AFL-CIO’s presidential summit was one of general lackluster toward the Democratic candidates. 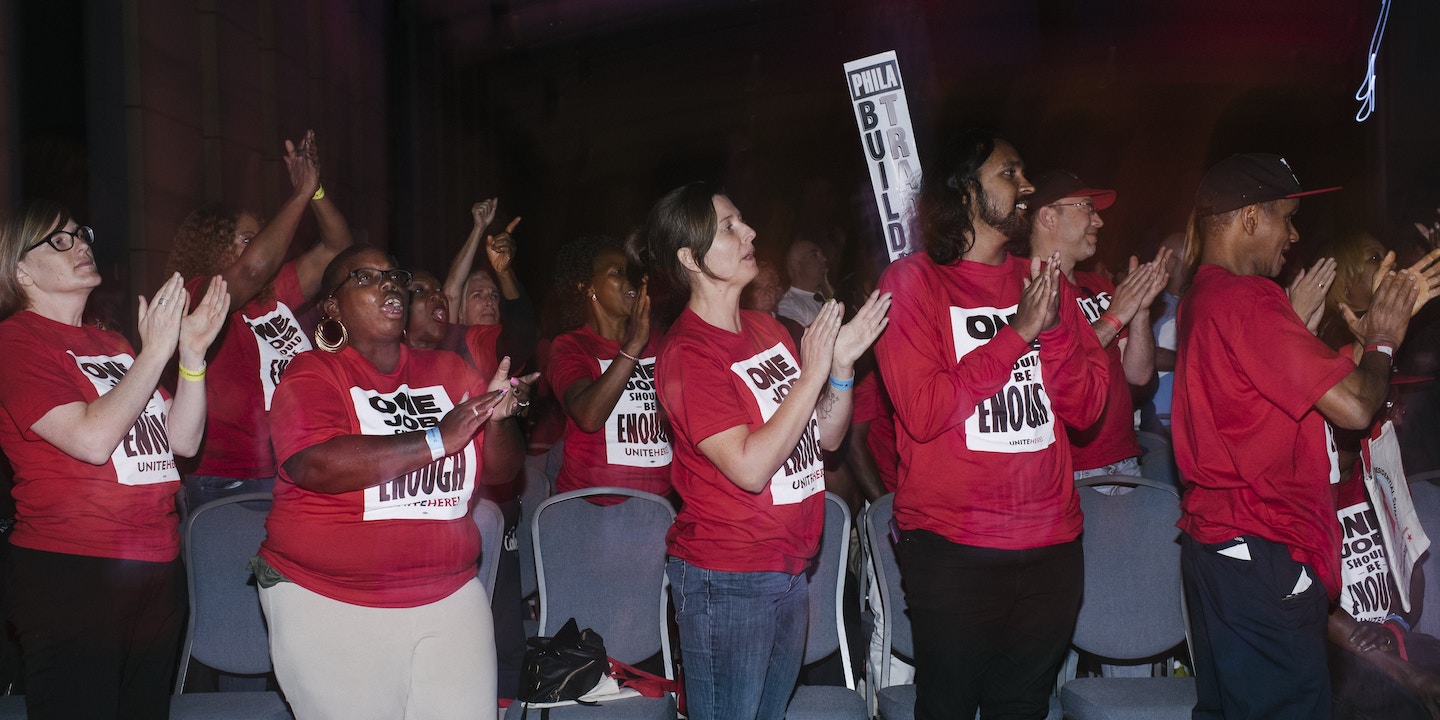 When one heckler yelled, “You’re an asshole!” at Vermont Sen. Bernie Sanders at Philadelphia AFL-CIO’s first Workers’ Presidential Summit on Tuesday, the entire room roared back with chants of the senator’s name.

But despite the candidates’ best efforts, the mood among the 2,000 attendees was one of general lackluster toward Democrats in the presidential race, and the six contenders who had showed up to try to win their votes. Notably, front-runner Sen. Elizabeth Warren was missing from the forum the day after she won an endorsement from the Working Families Party.

Some union members and attendees expressed support for Sanders and Biden, but most workers said they didn’t know who they would vote for, even as they expressed dissatisfaction with President Donald Trump. Some said they weren’t sure why they were at the summit — the first of its kind — but had been told by their unions that attendance was mandatory. One union official said that while it was important for members to attend, there weren’t repercussions for not going. Pennsylvania is heavy on Democrats’ minds as the party seeks to develop a strategy to take back the state Trump won by 44,000 votes in 2016. Several union members and executives pointed to Trump’s broken promises to revive failing industries, bring back jobs, and put more money into working peoples’ pockets. Trump’s signature tax cuts, for instance, came up multiple times in interviews at the forum, with people sharing personal stories about losing money under them.

Biden, who was first to speak, drew cheers from the crowd for his working-class upbringing and his track record of having “never not stepped up for” unions, and criticized corporate greed and declining wages. He talked about plans to reform the tax code to benefit working families. “Folks, we can do without Wall Street. Wall Street didn’t build America,” he said to applause. He veered at times into long-winded anecdotes as he illustrated how corporations continue to take advantage of working people, and his points didn’t always land.

Sanders used most of his openings to zero in on policy ideas and got the loudest cheers from the audience, but his ideas didn’t sit well with everyone in the crowd. He framed his message as an invitation to continue building the worker-focused movement he’s been organizing for decades and, like Biden, reminded attendees of how long he’s been an ally. While the workers and organizers were not necessarily set on what candidate to support, they were clear about the issues that matter to them, and what they’d like to see change from the 2016 election, when many individuals cast votes for candidates other than the one their unions officially endorsed.

Jerry Hardy, a systems technician with Verizon and a union member with the Communications Workers of America for 31 years, said he liked both Biden and Sanders.

“I mean, I’m voting for one of them either way,” Hardy said, referring to the field of Democratic candidates. “I’m not voting for the other guy.” Hardy said he wanted to hear candidates’ plans to reverse everything Trump had done, and said he thought climate was an issue that needed more attention. “Trump’s tax plan cost me about $7,000 a year,” he said. “But I wouldn’t really mind paying extra taxes if the deficit was going down. But it’s going up. Which kind of is confusing to me.”

Hardy said being part of the union had helped him put four daughters through college, and that he was concerned about access to Social Security and the possibility of retiring during a recession. He said he voted for Sanders in the 2016 primary because the senator had been at their picket line four times when they striked for more than 40 days in 2016. “I really don’t know how he’s gonna pay for some of his plans. But, you know, he stood up for us when we needed him so I stood up for him.”

Mark Storti, a 25-year old drywall finisher from Ridley, Pennsylvania, said attendance at the forum was mandatory for his Local 1955 Union. Storti said he liked the former vice president, but Anthony Collins, a 23-year-old from Blackwood, New Jersey, in the same union as Storti, wasn’t so sure. “I like him, he’s the man,” Storti said, laughing. “And he supports the unions and all that, you know, with the taxes and everything else obviously.”

Chris Fiegel, a 42-year-old organizer with the District Council No. 21’s International Union of Painters and Allied Trades, which includes Storti’s and Collins’s union, was similarly undecided.

“It’s probably Yang or Biden,” Fiegel said, pausing to think. “Bernie’s a little too one-way,” he said, suggesting that Biden would probably have a wider appeal. “To me, it should be who’s the best candidate to beat Trump. That’s what it comes down to,” he explained. 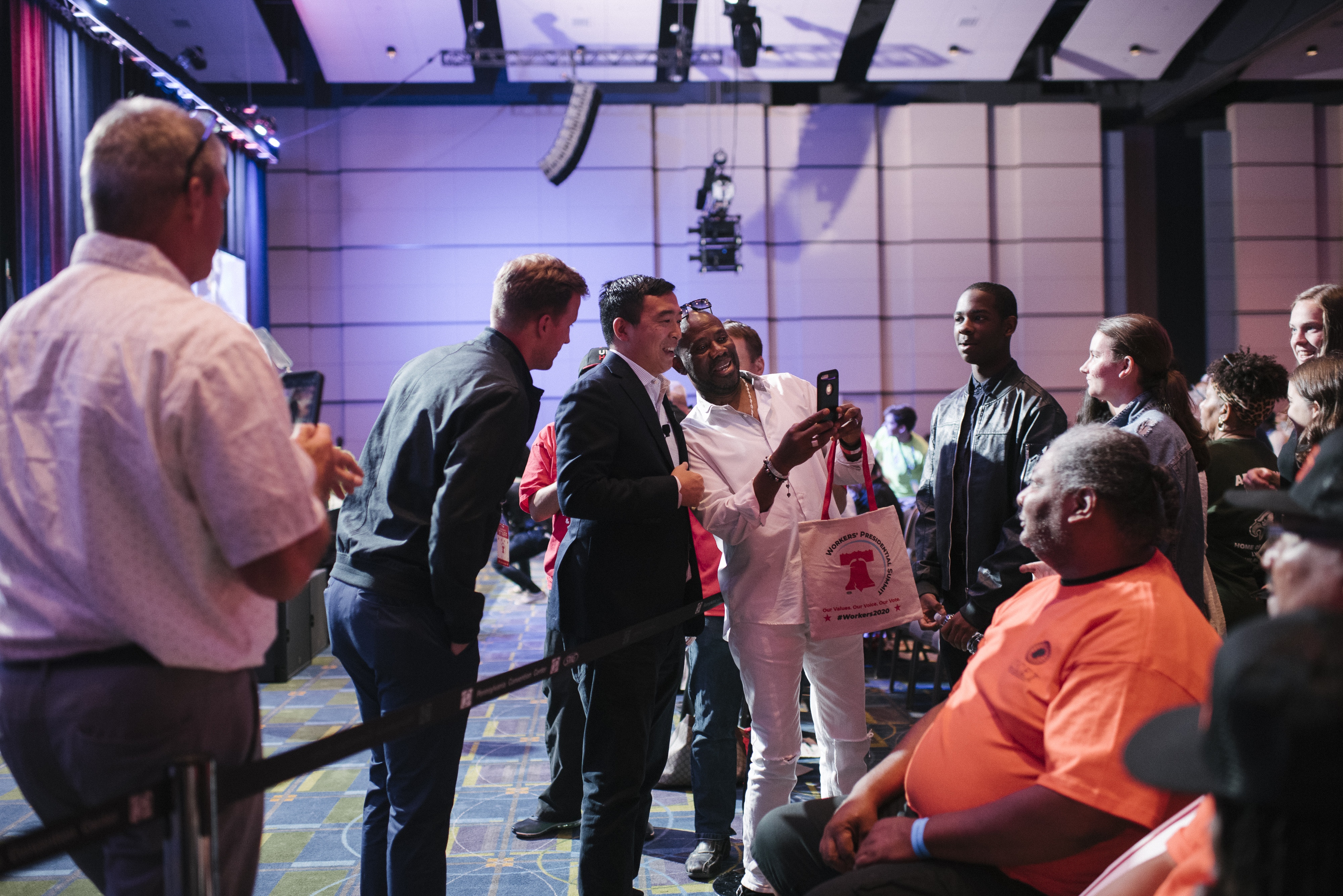 Presidential candidate Andrew Yang takes a selfie with an attendee at the Workers’ Presidential Summit in Philadelphia on Sept. 17, 2019.

Fiegel was not sold on proposals popularized by Sanders, like debt-free college. “There’s Republicans, and then there’s guys like me I think that meet in the middle, and people I know and guys I work with,” he explained.

Collins didn’t feel strongly about any candidate but became animated on the topic of paying for education. “I don’t know, I kind of feel like if you legalize marijuana, like what Canada’s been doing, you could get enough money to where you could make college free,” Collins said. Fiegel disagreed. “I don’t think it should be free, but I think it should be a lot less expensive,” Fiegel said.

Longtime Philadelphia journalist Vernon Odom introduced Sanders as a “longtime friend to organized labor.” After a brief recap of his history in organizing, standing in picket lines and helping workers at Amazon and Disney get a $15 minimum wage, Sanders made a thinly veiled jab at Biden, saying he wouldn’t focus on the past but pointing out that that unlike “some of the folks running for president,” he didn’t vote for the war in Iraq, to bail out Wall Street, or “disastrous trade policies” like NAFTA.

His goals, Sanders said, were getting Congress to pass a federal $15 minimum wage, make trade schools and public colleges and universities tuition-free, canceling student debt, taxing speculation on Wall Street, and transitioning energy systems away from fossil fuels. It was Sanders’s promise to guarantee health care as a human right, however, that seemed to get the biggest applause. Sanders’s positions on health care resonated with Fatoumata Kaba, a Union Shop Steward at LSG Sky Chefs who prepares food served on airlines. “Mainly at my shop, health care is an issue,” she said. She said she was happy with what both Sanders and De Blasio said at the forum because they both talked about a $15 minimum wage, an issue she wanted to hear more on from other candidates.

Still, she was not entirely pleased by Sanders’s performance. In June, members of Kaba’s union, the 3,000-member Unite Here Local 274, voted to strike for better wages and accessible and affordable health care, joining tens of thousands of other food service workers across the country. In response to a question from one of Kaba’s co-workers about whether Sanders would help them secure release from the national mediation board in order to strike, he said yes, and pivoted to discussing health care and taking on drug companies.

Kevin Boyle, business manager for the Ironworkers Local 401, was clear that his union, which has 700 active members, isn’t anywhere near a decision on backing a candidate. The union backed Clinton in 2016, but a lot of members “voted for Trump, I hate to say,” Boyle said.

Trump’s populist message resonated with those members, and the union is now trying to educate them on how Trump’s policies have impacted them. “What’s he doing for your paycheck and your bottom line? Well, he’s cutting pensions, he’s cutting your pay,” Boyle said.

“I think we should sit down and listen and let the presidential candidates come to labor and working families and ask us for our vote, instead of assuming that we’re gonna vote for them,” he said, noting that in 2016, candidates didn’t make their case to his members. “We are one of the strongholds in the East Coast, one of the strongholds in the country union-wise. I think you should be here in Philadelphia asking for labor’s help in anything you do to promote working families.”