If the agreement goes into effect, the U.S. will start deporting people to El Salvador wherever they may be from. 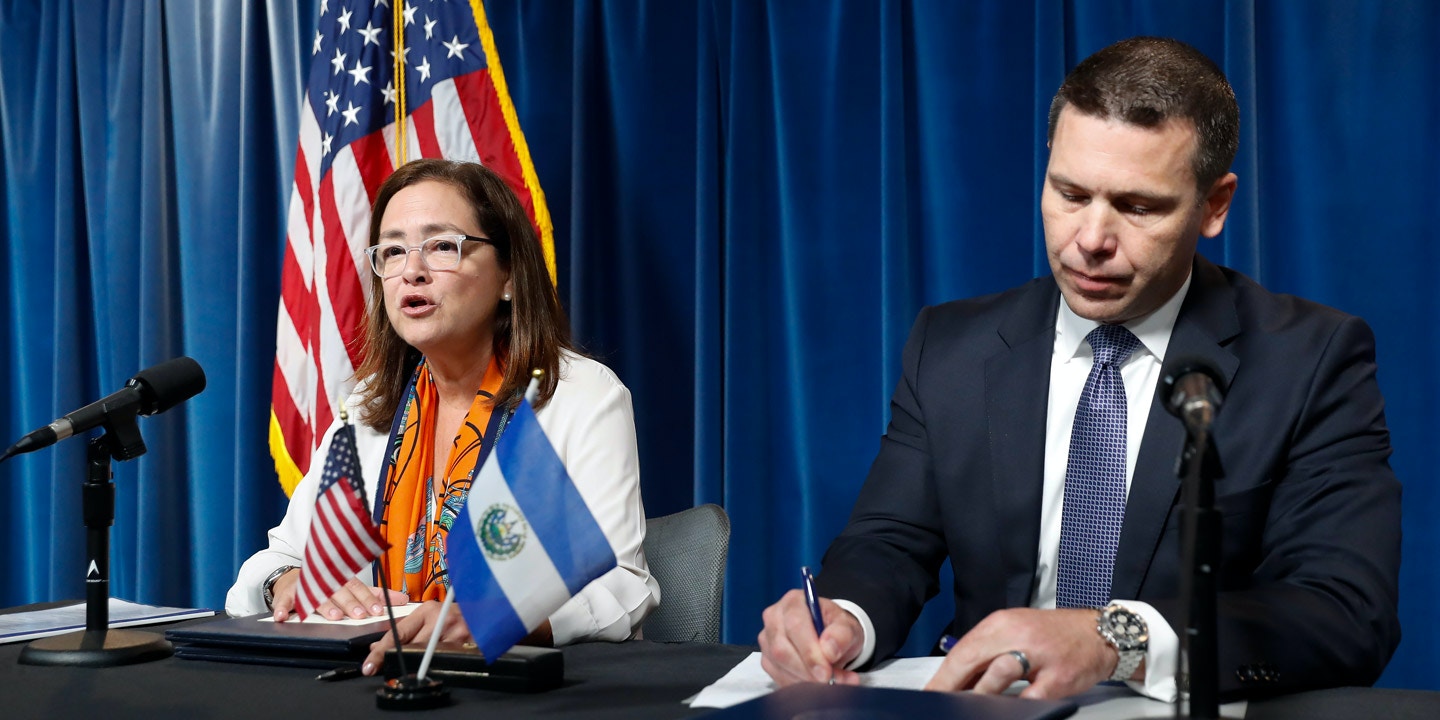 Amid a tightening embrace of Trump administration policies, last week El Salvador agreed to begin taking asylum-seekers sent back from the United States. The agreement was announced on Friday but details were not made public at the time. The text of the agreement — which The Intercept requested and obtained from the Department of Homeland Security — purports to uphold international and domestic obligations “to provide protection for eligible refugees,” but immigration experts see the move as the very abandonment of the principle of asylum. Aaron Reichlin-Melnick, policy analyst at American Immigration Council, called the agreement a “deeply cynical” move.

The agreement, which closely resembles one that the U.S. signed with Guatemala in July, implies that any asylum-seeker who is not from El Salvador could be sent back to that country and forced to seek asylum there. Although officials have said that the agreements would apply to people who passed through El Salvador or Guatemala en route, the text of the agreements does not explicitly make that clear.

“This agreement is so potentially sweeping that it could be used to send an asylum-seeker who never transited El Salvador to El Salvador,” said Eleanor Acer, senior director of refugee protection at the nonprofit organization Human Rights First.

DHS did not immediately respond to a request for comment.

The Guatemalan deal has yet to take effect, as Guatemala’s Congress claims to need to ratify it first. DHS officials are currently seeking a similar arrangement with Honduras and have been pressuring Mexico — under threats of tariffs — to crack down on U.S.-bound migration.

The agreement with El Salvador comes after the Supreme Court recently upheld the Trump administration’s most recent asylum ban, which requires anyone who has transited through another country before reaching the border to seek asylum there first, and be denied in that country, in order to be eligible for asylum in the U.S. Meanwhile, since January, more than 42,000 asylum-seekers who filed their claims in the U.S. before the ban took effect have been pushed back into Mexico and forced to wait there — where they have been subjected to kidnapping, rape, and extortion, among other hazards — as the courts slowly weigh their eligibility.

Reichlin-Melnick called the U.S.-El Salvador deal “yet another sustained attack at our system of asylum protections.” It begins by invoking the international Refugee Convention and the principle of non-refoulement, which is the crux of asylum law — the guarantee not to return asylum-seekers to a country where they would be subjected to persecution or death. Karen Musalo, law professor at U.C. Hastings Center for Gender and Refugee Studies, called that invocation “Orwellian.”

“The idea that El Salvador is a safe country for asylum-seekers when it is one of the major countries sending asylum-seekers to the U.S., a country with one of the highest homicide and femicide rates in the world, a place in which gangs have control over large swathes of the country, and the violence is causing people to flee in record numbers … is another absurdity that is beyond the pale,” Musalo said.

“El Salvador is not a country that is known for having any kind of protection for its own citizens’ human rights,” Musalo added. “If they can’t protect their own citizens, it’s absolutely absurd to think that they can protect people that are not their citizens.”

“They’ve looked at all of the facts,” Reichlin-Melnick said. “And they’ve decided to create their own reality.”

Last week, the Salvadoran newspaper El Faro reported that the country’s agency that reviews asylum claims only has a single officer. Meanwhile, though homicide rates have gone down in recent months — since outsider president Nayib Bukele took office in June — September has already seen an increase in homicides. Bukele’s calculus in accepting the agreement is still opaque to Salvadoran observers (Guatemala’s version was deeply unpopular in that country), but he has courted U.S. investment and support. The legal status of nearly 200,000 Salvadorans with temporary protected status in the U.S. is also under threat from the administration. This month also saw the symbolic launch of El Salvador’s Border Patrol — with U.S. funding and support. This week, Bukele, who has both sidled up to Trump and employed Trumpian tactics, will meet with the U.S. president in New York to discuss immigration.

Reichlin-Melnick noted that the Guatemalan and Salvadoran agreements, as written, could bar people not only from seeking asylum, but also from two other protections meant to fulfill the non-refoulement principle: withholding of removal (a stay on deportation) and the Convention Against Torture, which prevents people from being returned to situations where they may face torture. That would mean that these Central American cooperation agreements go further than the recent asylum ban, which still allows people to apply for those other protections.

Another major difference between the asylum ban and these agreements is that with the asylum ban, people would be deported to their home countries. If these agreements go into effect, the U.S. will start sending people to Guatemala or El Salvador, regardless of where they may be from. In the 1980s, the ACLU documented over 100 cases of Salvadorans who were harmed or killed after they were deported from the U.S. After this agreement goes into effect, it will no longer be just Salvadorans who the U.S. will be sending into danger.