Kathryn and James Murdoch have begun a major push into American politics ahead of 2020. But their foray into Pennsylvania raises questions. 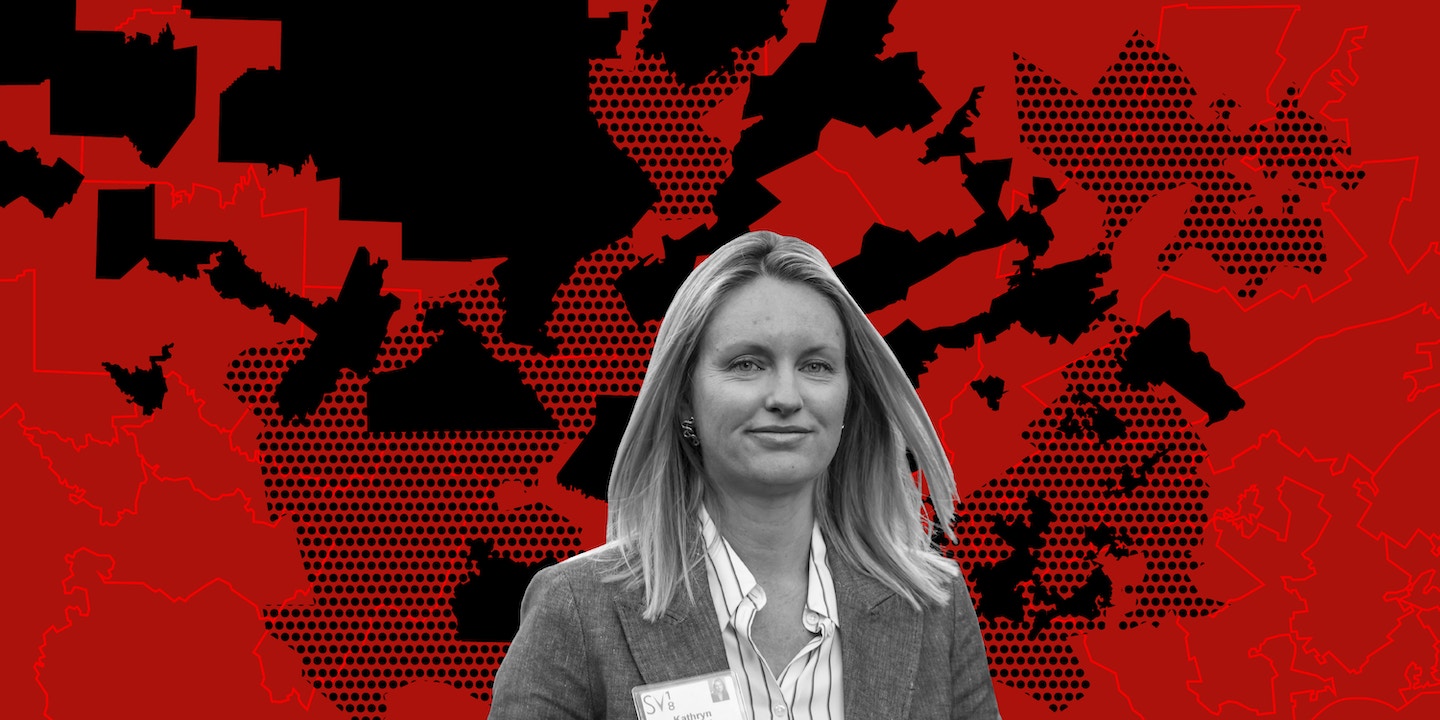 It’s not unusual for billionaires and lobbyists to set up political groups that masquerade as grassroots movements, but most of the time they make it slightly difficult for the rest of us to figure out what’s going on. Other times, however, it’s not that hard.

Pennsylvanians Against Gerrymandering is in favor of an independent citizens commission to draw federal district lines in Pennsylvania following the 2020 census, according to the group’s website. Its proposed legislative framework would “prohibit elected officials from serving on the commission, impose a supermajority requirement to adopt maps, and introduce standards for public transparency during the map drawing process.” It’s the kind of agenda that’s favored by advocates of voting reform who don’t want Republicans or Democrats to dominate the process.

But there appear to be a number of anomalies in the available information about Pennsylvanians Against Gerrymandering, the most important of which is that lobbyists associated with it were previously involved in precisely the kind of gerrymandering the group is supposed to stand against. Two of the most powerful lobbying firms in the state — Long, Nyquist & Associates and Maverick Strategies — are registered as working on behalf of Pennsylvanians Against Gerrymandering, but both firms are regarded as GOP-inclined. And both firms have lobbyists who were closely linked to the notoriously rigged election maps that Republicans engineered in the state after the 2000 and 2010 censuses.

The rollout of Pennsylvanians Against Gerrymandering has been surprisingly quiet. Unite America’s announcement of its funding received almost no attention; there appear to have been no news stories about it in September, and Unite America didn’t even mention it on Twitter. In Pennsylvania, voting reform activists had no idea that a newcomer existed and was being praised and singled out for extremely generous attention by a New York City billionaire (the Murdoch family is worth nearly $20 billion). Jill Greene, executive director of the League of Women Voters’ Pennsylvania chapter, told The Intercept last month, “I don’t think I’ve ever heard of them.”

Pat Beaty, the legislative director of the nonpartisan Fair Districts PA, laughed out loud when he read Unite America’s description of Pennsylvanians Against Gerrymandering as “leading the legislative advocacy campaign” for fair elections in the state. “I have never heard of these people,” he said.

While it is not known how much Unite America is giving to Pennsylvanians Against Gerrymandering, it is making large grants to the other groups it is backing. The head of Voter Choice Massachusetts, Mac D’Alessandro, told The Intercept that his organization is receiving more than $1 million in matching funds from Unite America. The New York organization funded by Unite America, Rank the Vote, is getting $500,000, according to Susan Lerner, executive director of the New York chapter of Common Cause, which is a key participant in Rank the Vote.

The funding for Beaty’s organization in Pennsylvania pales in comparison: Fair Districts has an annual budget of about $125,000 raised from small donors in the state, according to Beaty.

After The Intercept reached out, Unite America altered its description to say that Pennsylvanians Against Gerrymandering was “supporting” a legislative advocacy campaign rather than “leading” it. Unite America also removed a reference to Fair Districts, after Beaty said Fair Districts contacted Unite America to say it didn’t want its name used in their announcement. Unite America; Long, Nyquist & Associates; the Gober Group; Maverick Strategies; and Kathryn Murdoch did not reply to repeated requests for comment.

What this means is that all of a sudden, a new group with a billionaire backer, no track record, not much of a paper trail, a disinclination to talk with reporters, and lobbyists with a history of undermining fair elections appears to have far more money at its disposal than established groups. And this is occurring in one of the most important swing states in the country.

The grants from Unite America are “just the beginning,” according to its September announcement. While Unite America has not provided any figures on its plans for future spending, Kathryn Murdoch suggested, in an interview last month with the New York Times, that she and her husband James (who is Rupert Murdoch’s second son) intend to make at least $100 million in political donations. She described herself as a “radical centrist” and has contributed the maximum amount allowed to Pete Buttigieg’s campaign for the Democratic presidential nomination.

“I am thrilled to support these campaigns alongside a growing community of philanthropists who are stepping forward to help accelerate the democracy reform movement,” Murdoch said in the September announcement.

The question of how America elects its representatives is, in some ways, more consequential than the question of who runs for office  — because voting systems can all but determine which candidates win. Citizen-led and nonpartisan redistricting commissions are generally seen as the best way to draw fair boundaries of legislative districts, rather than leaving it in the hands of party politicians. But the details matter. The criteria for a commission — such as preserving rural counties over ethnic communities of interest — could deeply shape the outcome. And nonpartisan commissions have reportedly been used by partisans to cover for gerrymandering in the interests of one party or another in states across the country.

In the 2000 election, under the old maps, the state was closely divided, with Republicans controlling 11 House seats and Democrats controlling 10. Following the census, however, with the GOP in control of the state legislature and governorship, and Long as a principal architect, boundaries were set for maximum partisan power. The state experienced less population growth than other states, meaning Pennsylvania lost two House districts. The gerrymander concentrated Democratic voters into tightly packed districts, while spreading GOP-leaning areas into pockets designed to limit competitiveness.

The state was a crucial battleground in an effort championed by Karl Rove, President George W. Bush’s strategist, to secure Republican congressional majorities through high-tech mapmaking. The Pennsylvania plan, authored by Long, made at the “behest of White House and national GOP strategists,” produced the “biggest pro-Republican swing in the nation,” according to a report in the Harrisburg Patriot-News.

In the following midterm election in 2002, Republicans won 12 House seats and the Democrats controlled only seven House seats. In 2004, votes were about evenly distributed among Democratic and Republican House candidates, but the GOP again maintained its five-seat advantage.

“This state is very much becoming more Republican and this map, frankly, helps in that trend,” Long told the Philadelphia Inquirer in 2002, as the reapportionment process came to a close.

In 2007, Long moved to the private sector, co-founding his consulting firm. Another senior GOP operative, Todd Nyquist, joined two years later. But Long continued to stay involved in Republican campaigns and efforts to use Pennsylvania’s election boundaries to strengthen the GOP’s partisan advantage in federal elections, this time for the presidential campaign.

In 2011, Long helped create an organization called All Votes Matter, which was designed to change the way the electoral votes in the state are awarded. Rather than a winner-take-all system that is in place in most states, the group sought to award the electoral college by congressional district, a system that would have ensured a Republican would win the majority of Pennsylvania’s electoral college votes even if President Barack Obama (or any future Democrat presidential candidate) had carried the state in his 2012 reelection. Following a national outcry over the attempt, the All Votes Matter bid failed.

The 2011 gerrymander was an even more sophisticated effort by the GOP. In 2010, the tea party wave brought Republicans to power again in Pennsylvania, with control of the state legislature and governorship. The ascendant GOP again used the census reapportionment to carefully tailor the mapmaking process to create what election analyst Sean Trende wrote could be the “Gerrymander of the Decade.”

The map created “a group of Rorschach-inkblot districts in southeastern Pennsylvania,” as Trende noted, winding and curving to lock Democratic voters into deeply blue seats, while merging two Democratic districts in the western part of the state. Democrats were placed at a disadvantage, while 13 House seats for Republicans were drawn as safe seats. The map worked as intended. In 2012, the first congressional election post-redistricting, Democrats won a majority of statewide votes for House campaigns but Republicans managed to win 13 of the state’s 18 congressional districts.

Pennsylvania’s 7th District, designed to be held by a Republican in the generally Democratic-leaning Philadelphia suburbs, served as one particularly egregious example. The district was spread out over five counties, carving up individual communities with partisan and racial intent. At one point, in the 7th District, a city was divided with a connection point drawn so narrowly that one part of the district is connected only by a single steakhouse restaurant.

What’s striking about the 7th District is that Unite America actually cites it as an example of egregious gerrymandering — yet doesn’t mention that the district was created, in part, by the lobbyists who are now supposed to be fighting against abuses of its sort.

It is not clear why Unite America and Long, Nyquist & Associates joined forces in what they claim to be a nonpartisan redistricting effort ahead of the 2021 redistricting cycle. But it appears their relationship may go back to at least 2014. The executive director of Unite America, Nick Troiano, ran in a congressional Pennsylvania district in 2014 as an independent against an incumbent Republican, Thomas Marino. According to FEC records, Marino’s campaign consultants included Long, Nyquist & Associates. Marino was reelected to Congress with 62 percent of the vote.

Pennsylvanians Against Gerrymandering also appears to be getting help from at least one other lobbyist involved with prior gerrymandering efforts by the GOP. Alan Philp, the contact listed for Pennsylvanians Against Gerrymandering on its lobbying registration forms and on a website registration, is a Colorado-based Republican consultant who was involved in a 2016 ballot measure attempt, called End Gerrymandering Now, that sought to reform Colorado’s redistricting process. But critics alleged that the group was a stealth attempt by the GOP to craft rules that favored Republican candidates by insufficiently prioritizing district lines that preserve “communities of interest.” The Colorado Independent, a left-leaning outlet, wondered if the group was “actually a nefarious Trojan Horse plot to tint Colorado red?”