Formerly incarcerated people questioned Democratic candidates about their positions on the criminal justice system. But only three candidates showed up. 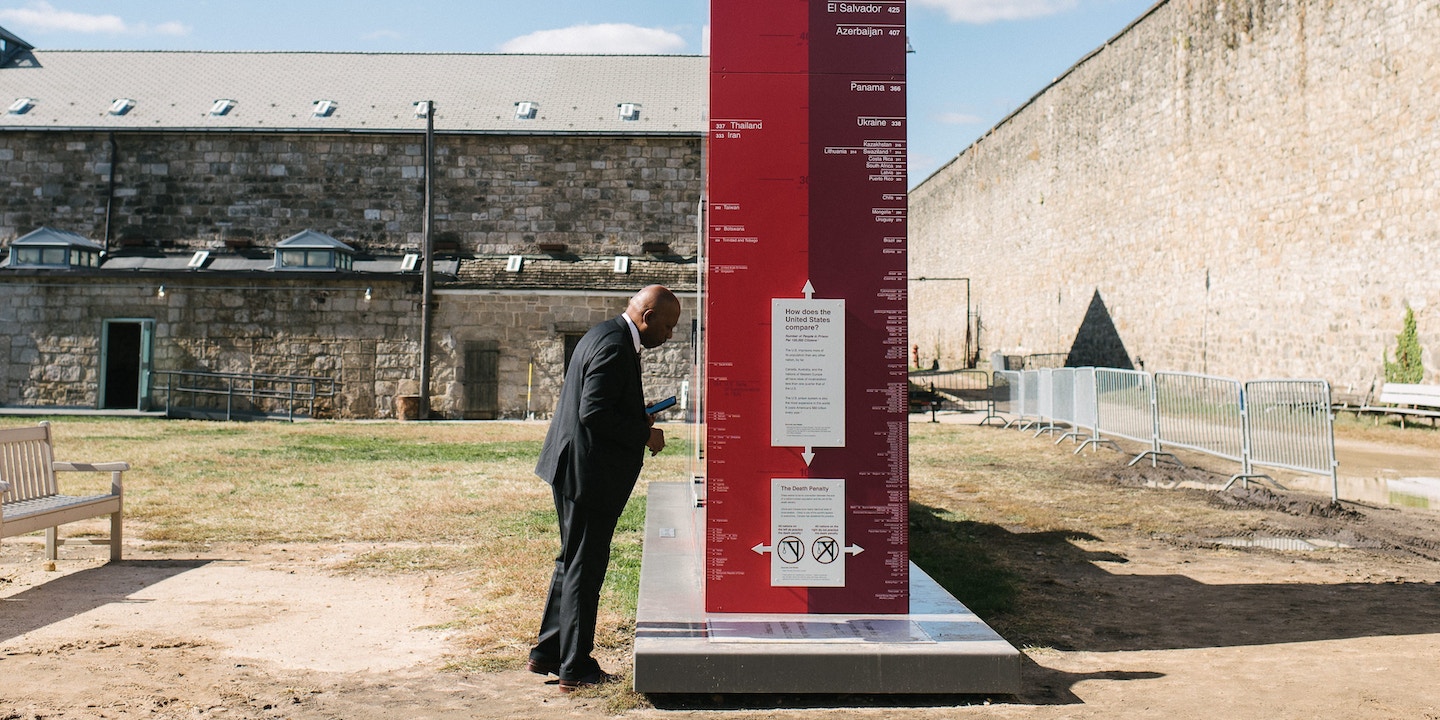 Collectively, the men and women in the room had hundreds of years of prison experience. The presidential town hall, the first ever to be hosted by formerly incarcerated people, was a unique opportunity for candidates to speak about the criminal justice system with those who know firsthand its devastating failures. But only three candidates showed up — and while the conversation delved into questions rarely tackled on the campaign trail, some of the candidates’ answers left those in the audience disappointed.

The event itself was historic: Formerly incarcerated men and women questioned presidential candidates about their positions on U.S. mass incarceration, for-profit prisons, and post-conviction disenfranchisement, among other issues. The setting, too, was historic: Philadelphia’s Eastern State Penitentiary, the first modern prison in the United States, a gothic panopticon with rows of dusty cells and rusting bed frames that was used until 1970.

The candidates who showed up on Monday — Sens. Kamala Harris and Cory Booker, and billionaire Tom Steyer — sat close to a few dozen audience members representing a wide range of justice reform organizations led by those who know the system best. There were hugs, selfies, and some hard questions. But most notable was the absence of most of the presidential candidates, including all the frontrunners, and the sometimes evasive answers of the candidates who did show up.

“In that room, you had some of the foremost leaders in the country, folks who have been working for decades to lift the systemic oppression of incarcerated people,” said J. Jondhi Harrell, a Philadelphia activist who spent 25 years in federal prison. “To those who say that they want to be president and have specific ideas about how to reform the system, you have the opportunity to speak to the experts in the field. To just wave this off and say it’s not important really speaks to what you feel not only about justice reform, but also about black and brown people.” Left/Top: J. Jondhi Harrell, a formerly incarcerated activist and member of the Philadelphia Coalition for a Just District Attorney. Right/Bottom: Erica Smith, a community organizer with California-based Starting Over Inc.Photos: Hannah Yoon for The Intercept

Erica Smith, a California-based organizer with a group that provides transitional housing for formerly incarcerated people, made a similar point. “I was disappointed that some of the other candidates didn’t value what we have to say enough to come have a discussion with us,” she said. “We are 70 million deep in the United States, people who are system-impacted. It’s just the feeling of being discarded once again.”

Booker, who has long made bipartisan, if somewhat moderate, criminal justice reform one of his signature legislative issues, wasted no time criticizing his absent opponents, many of whom were attending a different event. “This is a chance to have a conversation with formerly incarcerated people, and we have three show up? I’m sorry, that is unacceptable,” Booker said as he took the stage. “This is not a side issue, this is a moral issue that is a cancer on the soul of our country.” Both Booker and Harris stressed their record of working on justice reform and offered policy-specific answers that showed their familiarity with the issues at stake and the language of the reform movement. But they largely stuck to their line and failed to take the opportunity to reevaluate positions they had already embraced. Booker defended his record reaching across the aisle to work with Republicans on reform efforts and admitted shortcomings in tackling police accountability when he was mayor of Newark. But he reiterated his support for restoring the right to vote only for those incarcerated for nonviolent crimes — drawing a distinction between those convicted of violent and nonviolent offenses that is widely criticized among formerly incarcerated people, including some who spoke at the event. “I am sorry I will not sacrifice progress on the altar of purity on issues,” said Booker, arguing that his opposition was strategic rather than based on values.

Harris once again deflected attention from her career as a prosecutor, passing on what some audience members had hoped would be an opportunity to reevaluate it. Instead, she touted her work on reentry and anti-recidivism initiatives, as well as her plans to examine the for-profit prison industry and end solitary confinement. 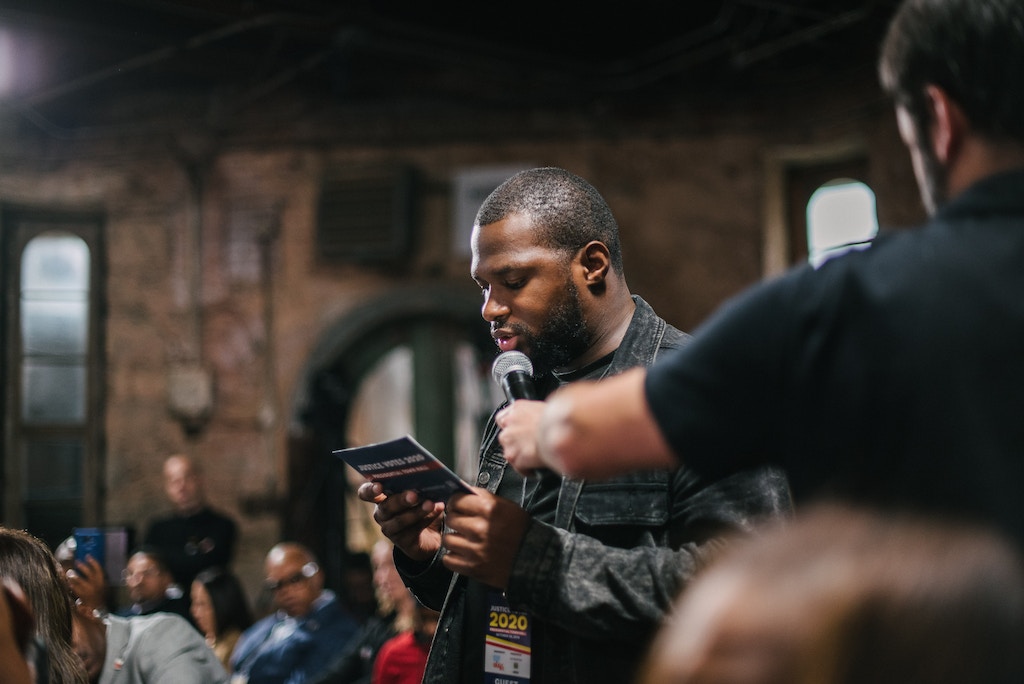 Josh Glenn, co-director of the Youth Art and Self-Empowerment Project in Philadelphia, asks a question to Cory Booker during the town hall.

“I made a very conscious decision to become a prosecutor knowing how broken and how unjust the criminal justice system of America can be,” Harris said, raising a few eyebrows. (“Wouldn’t you want to be a public defender then?” Smith quipped later.)

When pressed gently about her record, Harris shot back that she was the only candidate for whom criminal justice reform had been her life’s work. “There are a lot of people who have language now about it, but I would ask you to challenge them, ask them, what have they actually done to reform the criminal justice system? And then I’ll have more of a conversation with you about my record.”

That answer hardly satisfied those who had hoped she would finally open up to a substantive conversation about her work as a prosecutor.

“There are some things she did as attorney general in California that certain advocates are just never going to accept unless she says, ‘If I had known then what I know now, I wouldn’t have made those decisions,’” said Vivian Nixon, a town hall moderator. “And she’s not doing that. She’s avoiding that at every cost, and I don’t understand why. Just come out and say, ‘If I was making those decisions today, I would make different ones.’ I wish she had done that.” From left, DeAnna Hoskins, Vivian D. Nixon, Norris Henderson, and Daryl Atkinson, who together moderated the town hall at the Eastern State Penitentiary in Philadelphia.

But overall, Harris got little pushback — and plenty of credit for being the first candidate to commit to participate in the town hall. “Maybe that’s one of the reasons why she was kind of soft-soaped,” Harrell said. “But I think that anytime you aspire to power, and ordinary people have an opportunity to question you on your record and your core beliefs, you can’t miss that opportunity.”

Steyer came to the stage with far less criminal justice experience than Booker and Harris and sometimes stumbled on questions, including about whether he had hired people with felony convictions and about his hedge fund’s investment in Corrections Corporation of America (“I was really dumb, I regret it, it was a mistake,” he said, noting that he sold his stake). Steyer at times seemed to be catching up on issues he wasn’t familiar with, at one point responding to the moderator reciting facts about the justice system with a surprised “Is that right?”

“The way you get the right policy is to go to the community that’s affected and get their experience and their wisdom,” Steyer said. 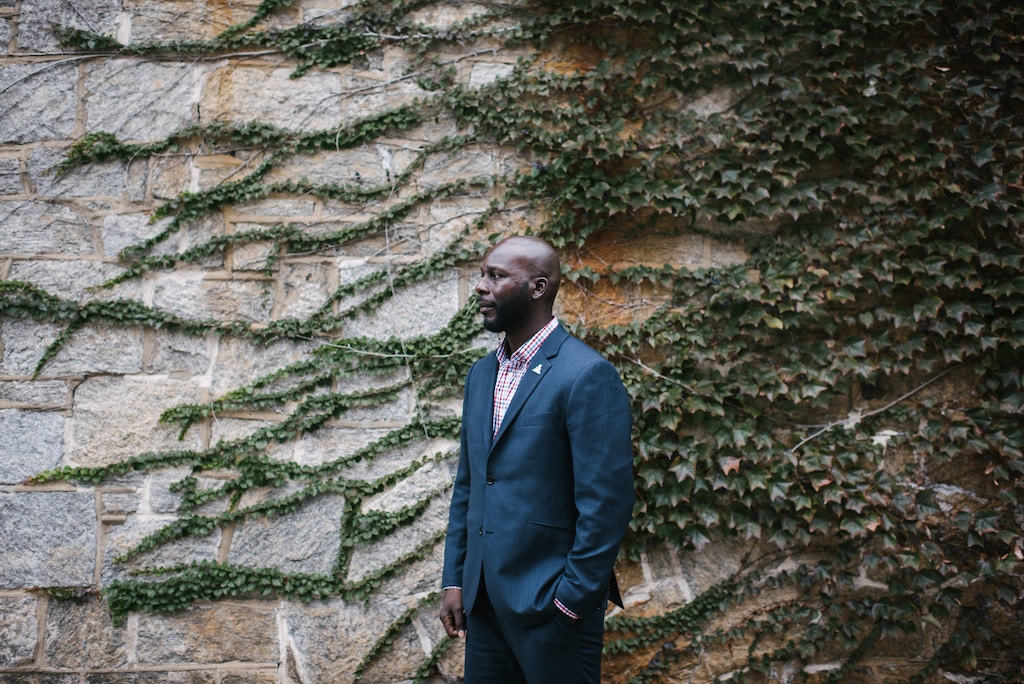 Darren Mack, the director of community engagement and advocacy of JustLeadershipUSA.

That was the intent of the event, organizers stressed. If only more candidates had showed up.

“Every other special-interest group, if you want to call it that, they have been willing to go sit down and talk to them,” said Norris Henderson, a town hall organizer who was wrongfully incarcerated in Louisiana for 27 years. “Don’t assume you can just figure out how to solve the problem, because I believe those who are closer to the problem are that much closer to the solution.”

In the end, those leaving the event said they were elated that something so unprecedented could have even happened, but they were hardly impressed with candidates’ turnout or commitments.

“Every four years, presidential candidates should come to forums like this,” said Darren Mack, who spent 20 years in prison and is now director of community engagement and advocacy with JustLeadershipUSA, which, among other issues, spearheaded the campaign to close Rikers Island in New York City. Mack pointed to the “debacle” last week at a historically black college and university in South Carolina, where a justice forum for presidential candidates came under fire after one of the event’s sponsors honored President Donald Trump for his criminal justice work. “That shows you exactly why candidates need to be talking to people who are directly impacted,” Mack said. Eastern State Penitentiary was the first modern prison in the United States and remained in use until 1970.

But while attendees gave the three candidates who showed up in Philadelphia credit for being there to hear them out, several said they left more convinced than ever that any real changes to the system would need to happen without politicians.

“Historically, I’ve seen the United States just ignore our communities and so I won’t feel hopeful until I see results,” said Josh Glenn, who runs a Philadelphia-based group for incarcerated youth and felt that Booker had skirted around a question he had asked about the Juvenile Justice and Delinquency Prevention Act. “I hope whatever president comes into office, that they do the right thing by our communities. But if they don’t, we’re going to stand up for ourselves, and we’re going to make sure that we get what we need on our own.”