U.S. Border Agency Says It’s Not Singling Out Iranians. This Family Waited 11 Hours and Was Asked About Iranian Heritage.

At a border crossing with Canada, Customs and Border Protection made dozens of families with Iranian heritage wait for hours to enter the U.S. 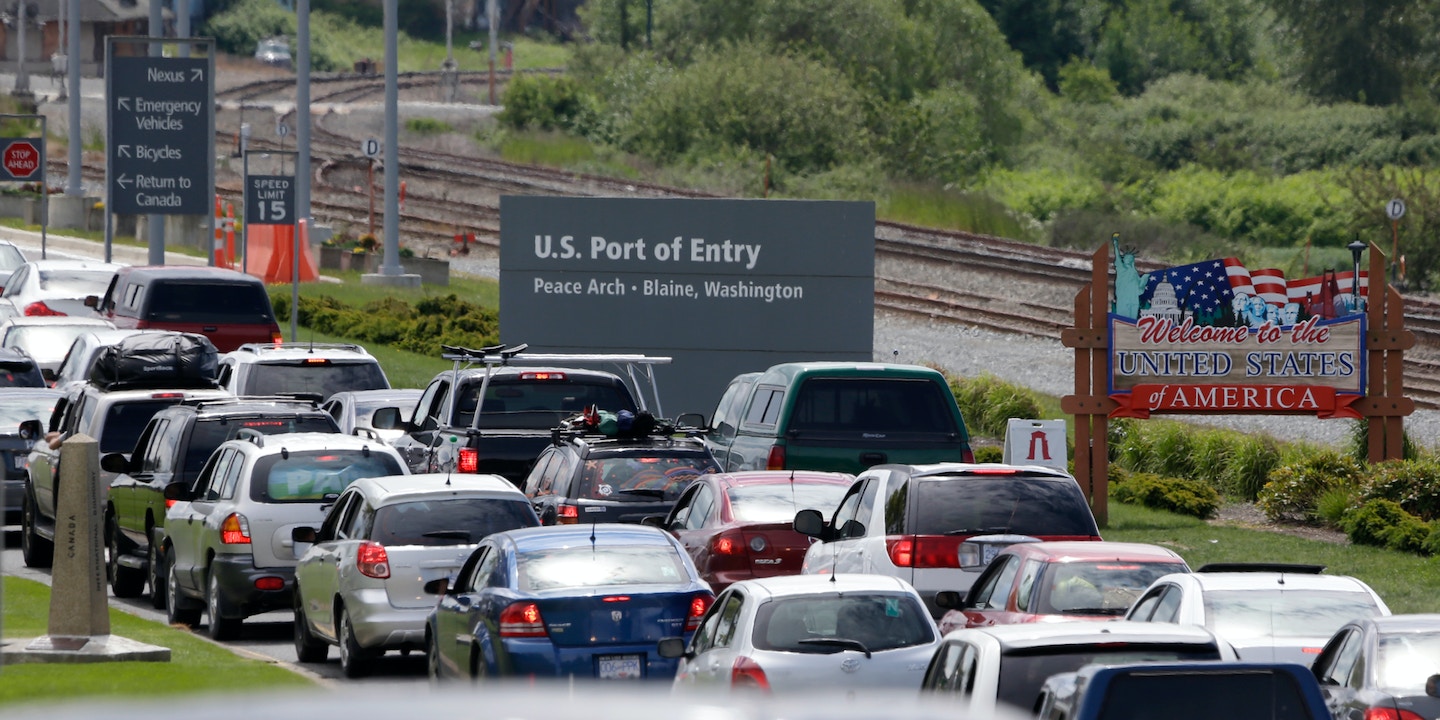 Dozens of Iranian families, some including U.S. citizens, were detained and questioned at the U.S.-Canada border over the weekend, heightening concerns that the Trump administration’s recent actions in the Middle East could have serious consequences for Iranians living in the United States. Among those swept up in the ordeal, trapped in the no man’s land of a U.S. border office, was a young medical student and her family.

In an interview with The Intercept on Sunday, Crystal, who asked that her last name not be used for fear of retaliation, described how she and her family were held for nearly half a day while subjected to questions about their relationship to Iran.

Crystal and her brother are American citizens, born and raised in the U.S. Their parents are dual citizens of the U.S. and Iran. The family had driven to Vancouver for a vacation and were on their way back to the States on Saturday afternoon when their trouble began.

It was approximately 2 p.m. when they pulled up to a port of entry near Blaine, Washington. “We go frequently,” Crystal explained. “It’s never been a huge problem.” This time was different. While still in their vehicle, Crystal said a Customs and Border Protection officer asked her parents if they were born in Iran. “Did you immigrate, or are you a refugee?” she recalled the officer asking. “What is your occupation? When is the last time you went to Iran?” The officer picked up a phone and made a call.

“Why are you pulling us aside? Is it just because we’re from Iran?”

“At that point, we knew we were going to get pulled over,” Crystal said.

The officer handed the family their passports and directed them to pull into a parking area. “Why are you pulling us aside?” Crystal’s mother asked. “Is it just because we’re from Iran?” According to Crystal, the officer’s reply was both apologetic and ominous. “I’m sorry,” she recalled him saying. “It’s just a really bad time for you guys right now. Go ahead and pull to the side.”

“‘Are you serious?” Crystal thought to herself. “It’s always going to be a bad time for us, if that’s the case.’”

The family parked their car, handed over their keys, and walked inside. More than 11 hours would pass before they emerged again.

Word of what was happening at the Peace Arch Border Crossing began to spread on Sunday, when Hoda Katebi, an Iranian American writer, activist, and community organizer, tweeted that U.S. Customs and Border Protection had been “ordered to detain [and] ‘report’ all Iranians entering the country deemed potentially suspicious or ‘adversarial’ regardless of citizenship status.” Katebi’s tweet was followed by a press release, also posted by the Council on American-Islamic Relations’ office in Washington state, which reported that “more than 60 Iranians and Iranian-Americans of all ages” had been detained at the crossing on Saturday. In addition to the reported detentions, the press release said that the national order to “report” suspicious or “adversarial” Iranians was conveyed by a source at CBP.

Masih Fouladi, CAIR’s executive director in Washington state, spent much of the day collecting testimony and fielding calls from reporters. “As an Iranian-American, this is my worst nightmare for my community here in the United States; having federal agents question American citizens about their loyalty to their country reminds me of the horrific incidents of Japanese American incarceration,” he wrote in an email to The Intercept. “This administration functions by causing chaos with no long term vision of how their precedents impact the image of our country to communities of color living here and to the billions of people who are observing this administration’s actions from abroad.”

Rather than immediately address the claims coming out of Washington state, CBP was silent for much of the day. Finally, late Sunday afternoon, the agency issued a statement denying that any policy of special border scrutiny had been put in place for travelers of Iranian heritage, including U.S. citizens and permanent residents. “Social media posts that CBP is detaining Iranian-Americans and refusing their entry into the U.S. because of their country of origin are false,” the statement said. With a reference to CBP’s parent agency, the Department of Homeland Security, the statement added, “Reports that DHS/CBP has issued a related directive are also false.”

The border enforcement agency elaborated in an email to The Intercept, writing that due to the “current threat environment, CBP is operating with an enhanced posture at its ports of entry to safeguard our national security and protect the America [sic] people while simultaneously protecting the civil rights and liberties of everyone.” According to the agency, wait times at the Blaine port of entry “increased to an average of two hours on Saturday evening,” though some individuals “experienced wait times of up to four hours due to increased volume and reduced staff during the holiday season.”

While CBP officers are not permitted to use national origin alone when choosing to send an individual to so-called secondary screening, it is one factor they are encouraged to consider in combination with others, including more subjective criteria such as suspicious behavior.

On Saturday, Homeland Security updated its National Terrorism Advisory System to include potential responses to Suleimani’s killing among current threats to the U.S. emanating from Iran. In an interview with the New York Times, former CBP Commissioner Gil Kerlikowske indicated that the update could increase the potential for an individual with ties to Iran to be sent to secondary screening.

Though The Intercept was unable to independently confirm whether a specific national order has been issued subjecting Iranians to heightened screenings at U.S. ports, Katebi said the Homeland Security source of that information has proven reliable in the past. And despite the government’s categorical denials, by Sunday evening multiple news outlets had collected independent accounts of Iranian-born Americans — including pregnant women and children — held at the Blaine port of entry, seemingly because of their Iranian heritage.

The processing office in Blaine was already full when Crystal and her family walked in. “There was at least 60 of us,” she said. Her family got in line, where they would remain for an hour and a half before having their first conversation with an officer. They handed over their passports and began their long wait.

“We didn’t get interviewed for probably like eight hours,” Crystal said.

The space was filled with families. Many had U.S. or Canadian passports. “I knew there was young kids because I could hear them crying,” Crystal said. “There was a lot of old people.” She laid down on the floor and tried to sleep. “There was only one toilet for all of us, and it was filthy. It ran out of toilet paper. It ran out of paper towels. There were no outlets — nobody could charge their phones,” she said.

“People can’t even cry,” she added. “There’s no tissues.”

As the hours ticked away, Crystal and her family members began to notice that men were receiving most of the questioning. In Iran, she explained, military service is compulsory for men at age 18. But that didn’t mean that the men held in the Blaine waiting room had access to Iranian military secrets. Crystal recalled speaking to one man who had only served in the military for a couple weeks. “I don’t even know anything,” the man told her. “I just went to the base. I don’t consider that military service.”

Some of the men were asked if they were part of the “IRG,” Crystal recalled. “A lot of the men didn’t even know what the acronym stood for. Apparently, it stands for Iranian Revolution Group or something.” (The Islamic Revolutionary Guard Corps is a powerful branch of the Iranian military; Suleimani had been in charge of its elite Quds Force.)

The questions were asked at a counter, Crystal explained, so answers were easy to hear. In addition to seeking military service information, officers seemed acutely interested in educational history and family contacts. “I even heard one lady be asked, ‘Write down all of your siblings’ names and their email addresses,’” Crystal said.

The ordeal in Blaine happened to coincide with an Iranian pop concert in Vancouver on Saturday night, which meant an increased number of Iranians crossing the border. At some point after the sun went down, Crystal said, border officers began turning people away. The port had seemingly hit capacity. “They were turning people away at the border on both sides, the Canadian side and the USA,” she explained. “There was just too many of us.”

“It’s just been crazy. I mean, my parents had come to America so I would never have to go through this.”

In general, Crystal said, it seemed that the officers had been given a task they didn’t know how to handle. The shifts changed three times while her family was being detained, she said, and each time the new crew of personnel had to get caught up on what they had been asked to do. “They didn’t even know why they had pulled us over,” she said. “We kept asking them questions. And they literally were like, ‘We’re sorry. We’re sorry. It shouldn’t be that long.’ But it took 11 and a half hours before we left.”

While she was being detained, Crystal missed a flight she had scheduled in the U.S. By midnight, the family’s frustration reached a boiling point. “We were like, ‘We didn’t do anything wrong,’” Crystal said. “’We’re American citizens. You took our passports away from us. Give us our passports. Let us go home.’”

The officers never asked Crystal or her brother any questions. Instead the focus was on her father, who at one point pleaded that at least his family be released. “My dad literally went up to them and was like, ‘Let them go,’” she said. “’They’re American citizens, born and raised here, never had anything to do with Iran, let them go.’”

Sometime around midnight, while Crystal was asleep on the floor, her mother got the attention of a newly arrived shift supervisor, explaining that her family had been detained longer than anyone else. The supervisor intervened, and at 1:30 a.m., the family was permitted to reenter the United States.

“Overall,” Crystal said, “it’s just been crazy. I mean, my parents had come to America so I would never have to go through this.”