The death toll keeps climbing back home in Italy, but the United States, my adopted country, is fundamentally unequipped to handle this crisis. 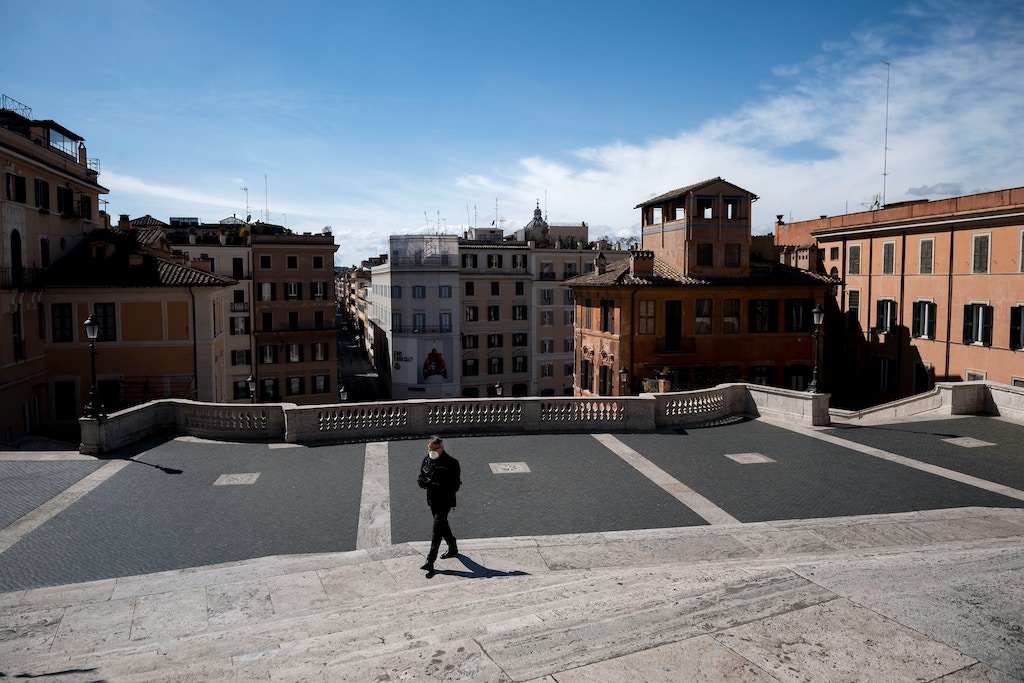 I have spent the last week looking for flights from New York to Italy — not because of coronavirus-inspired flash sales, but because I would rather go home to a country that’s currently in the grip of one of the worst outbreaks in the world than stay in the United States, where life is about to get infinitely worse.

More than 15,000 people have tested positive for the new coronavirus in Italy, more than 1,000 have died, and hospitals are at a breaking point. Hundreds of medical staff have been infected, and overwhelmed doctors are reporting having to choose which patients to treat. They are begging the rest of the world to take this virus more seriously. The entire country — 60.5 million people — has been on lockdown for almost a week.

In the U.S., meanwhile, where some are just starting to realize the enormity of the crisis and far too many remain in denial, confusion reigns, largely aided by our top officials’ inept response. Last night, after President Donald Trump abruptly announced he was blocking travel from Europe to the U.S. — though officials later retracted and clarified much of that statement — people in Europe raced to airports, reportedly paying as much as $20,000 to try to catch flights out. And still I am trying to figure out how to make the opposite trip.

Even as the death toll back home continues to climb and the lockdown gets stricter by the day, I would much rather weather this pandemic in Italy than here. I just can’t shake the terror that the United States, my adopted country, is fundamentally unequipped to handle what lies ahead.

When Italy announced its first Covid-19 case three weeks ago, it started aggressively testing people, making it the first country in Europe to record skyrocketing numbers of infected patients and to see its markets collapse. My ever-optimistic father, who worked in public health for decades and has been texting me calm and reasoned updates throughout the outbreak, wrote earlier this week that “things are getting hard.” Coming from him, that means they are really bad.

In the U.S., despite weeks of notice, officials are scrambling to get a grip on a quickly approaching disaster. Trump’s press conference last night was the most terrifying public statement I have ever heard, even from him. Days ago, as the number of infections rose at home, I began hearing about friends of friends here in New York who were struggling to get tested despite worsening symptoms. And yet as cases multiply in the U.S., the number of people tested here remains abysmally low. No one knows what’s coming, but we know far less here in the U.S. than people do back home.

It is a tragic irony that a public health emergency unlike anything we have seen in generations would come as Americans are constantly told that the idea of health care as a fundamental right is entitled, radical, crazy talk. What is crazy, to anyone outside the United States, is that it’s even a question.

Back in Italy, people are worried they’ll get themselves or their loved ones sick, they are angry at directives that came late, they are even scared that hospitals won’t be able to keep up. But there are more hospital beds and doctors per capita in Italy than there are in the U.S. The Italian government’s harsh restrictions are in part an effort to stop the virus from spreading to the south, where the health care system is weaker. But for all their fears, Italians don’t have to worry that tests won’t be available, or that they’ll have to pay for those tests, or for any of their care. They don’t have to fear that if they seek help now, they’ll get a surprise bill later or that medical costs will bankrupt them.

As Italy shut down its schools, families scrambled to figure out what to do with their kids. But the Italian government has moved to issue child care vouchers and paid leave. Closing schools is causing major disruptions, but nobody argued that you shouldn’t close public schools because that’s where tens of thousands of children get their only guaranteed meals.

The Italian government has tentatively approved a $28 billion plan to help Italians through the crisis, and mortgage payments and bills are on hold. The U.S. government will have to step in to mitigate the crisis too, but some politicians are already balking at the prospect, and I can’t blame my fellow Americans for going into this with low expectations. If the 2008 financial crisis is any indication, regular people won’t see much of any future bailout. Italians know that they’ll get through looming hard times because their government will do its part — not because it is a particularly good, generous, or even functional government, but because that is what governments are supposed to do. 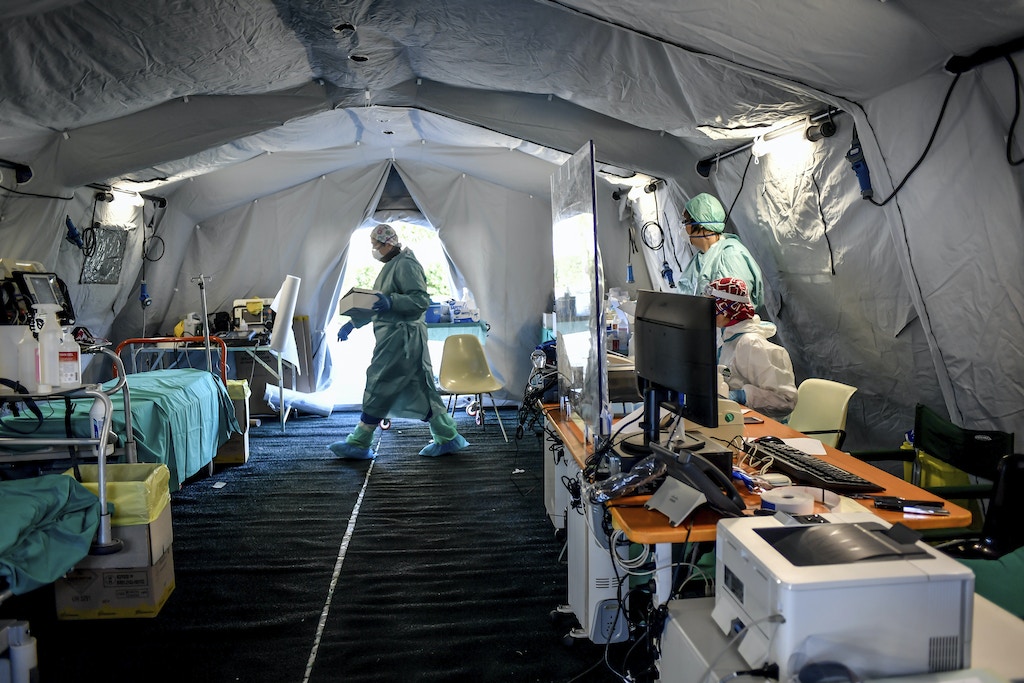 Medical personnel inside one of the emergency structures that were set up outside a hospital in Brescia in Northern Italy on March 10, 2020.

Yes, the Italian system is often a mess. Italians love to complain about their elected officials, and this crisis is no exception. Our government is notorious for its infighting and instability, and when the virus first hit, Italian politicians did what politicians do everywhere: They politicized the crisis, dragged their feet, pointed fingers. And some Italians thought they could outsmart the system, slipped out of quarantine, and went skiing.

The rollout of the new restrictions has been chaotic — though not quite as chaotic as it could have been, considering that these are unprecedented limitations of individual freedom for a nonauthoritarian regime. One of the most tragic consequences of the lockdown has been a series of prison riots that has left 12 people dead. There is no modern precedent for such violence in Italian prisons — but there are plenty of examples in the U.S., where two million people are imprisoned in conditions that counter every public health standard. Italian inmates are not paid 65 cents an hour to mass produce hand sanitizer they may not be allowed to use.

Of course, there are people in Italy who are especially vulnerable. For immigrants, the drama of the virus has been compounded by racism. Disinformation on social media has been rampant — and my own elderly aunt shared dubious advice by self-proclaimed experts before a younger relative informed her it was fake. Italy is no better than the U.S. on that front.

And in some ways, the responses to the virus in my two countries have been similar: late and misleadingly reassuring. But for all of Italy’s flaws, I would still rather be there than here. I have no confidence that the U.S. will do what is right during and after this pandemic. This country is structurally incapable and fundamentally unwilling to put people over money, and all people over just some.

This is a society that responds to poverty with police, and to health care needs with jail.

In the U.S., millions are uninsured or underinsured, people working multiple jobs can’t make rent, and workers making a few dollars an hour are told that if they miss a shift their hours will be cut. This is a society that responds to poverty with police, and to health care needs with jail. It may be true that viruses only see bodies, not class or immigration status, but there is no question that those who will bear the brunt of this pandemic will be the poorest and most marginalized. The fundamental inequality on which everything in this country is predicated will be exacerbated by this crisis in ways we cannot fathom.

Whatever myths my family in Italy held about the United States, they have largely come undone over the years I have lived here. I have found myself explaining countless times how everything from the U.S. criminal justice system to health care regularly fails to do what Italians expect of their institutions, no matter how much they criticize them. I have explained to incredulous friends used to complaining about Italy’s crippling bureaucracy just how unjust and racist U.S. bureaucracy can be.

And now I try to explain to them why I’d much rather be there than here at this scary time because of something more invisible even than a virus: the loneliness and isolation I feel here, in a country where everyone’s out for themselves.

The virus may be coming for all of us, but there is a fundamental difference between my two countries. In Italy, children stuck at home have been drawing signs with the words “Everything will be fine” and hanging them from windows all across the country. For a society as communal and physical in its affections as Italy, social distancing has been an extraordinary blow. And yet even with people locked up in their homes away from family and neighbors, a strong sense of solidarity has emerged. Italians know they’ll get through this because they have each other’s back. I am not sure we Americans can say that.