Volunteers in New York City’s “mobile morgues” are handling an onslaught of bodies with scarce supplies. 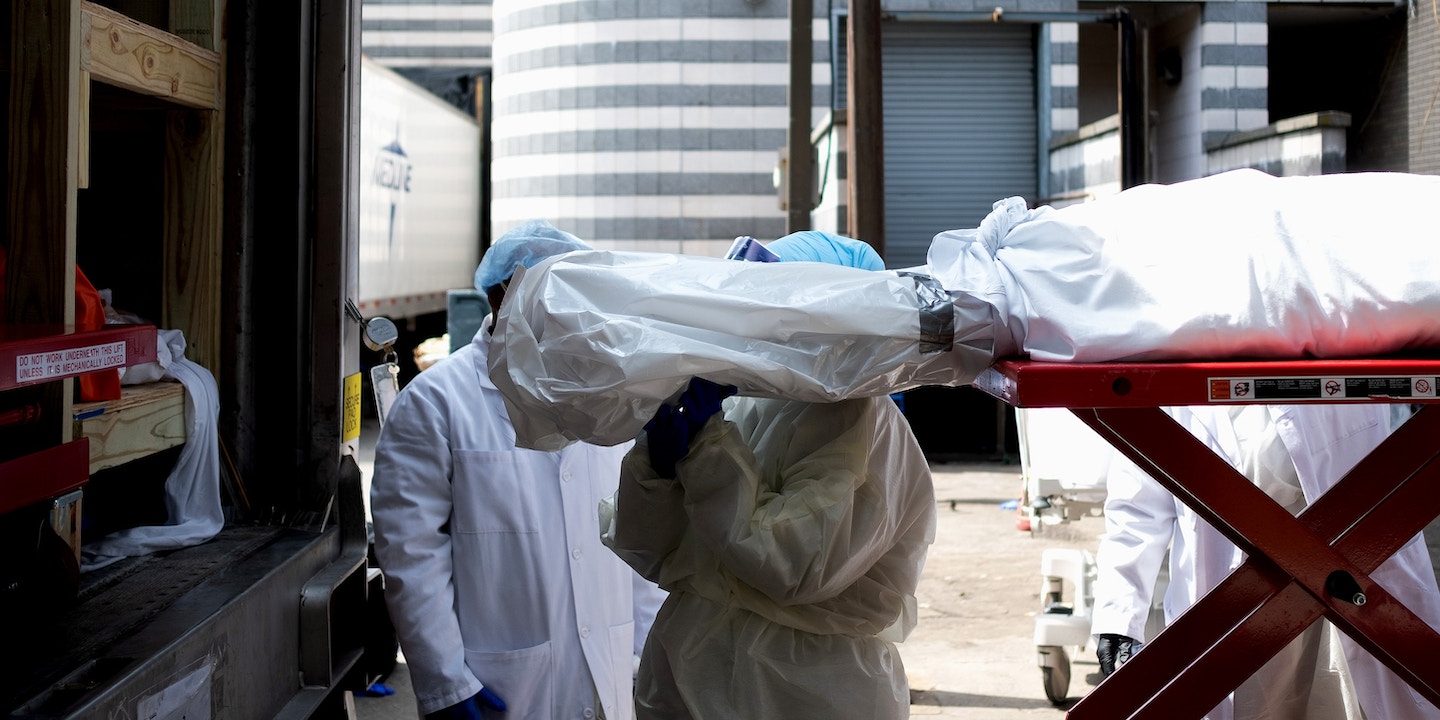 While protesters were railing against coronavirus lockdowns and Republican governors in Georgia, South Carolina, and Tennessee announced plans to open back up their states, Devin Speak was loading bodies onto a refrigerated truck in Brooklyn. A veteran of the U.S. Coast Guard who distributed food and water in Puerto Rico after Hurricane Maria, Speak is one of thousands of first responders who have volunteered to help New York City through the Covid-19 crisis, which continues to test the city’s ability to care for both its living and its dead.

Although Speak imagined he would be using his disaster training to help keep people alive, he was asked to work in “mortuary response,” which involves helping a hospital store the bodies of patients who have fallen to the virus. The three refrigerated trucks where he has been spending most of his shifts are parked at a loading dock at the back entrance of a Brooklyn hospital, where the in-house morgue was beyond capacity. (Speak asked The Intercept not include the name of the hospital because he is not authorized to speak on its behalf.)

The trucks are among 45 “mobile morgues” the city recently purchased to accommodate the surging number of Covid-19 casualties. But, even with their ability to store 3,500 bodies on top of the city’s usual capacity, New York is still struggling to keep up with the deaths, which had reached more than 14,000 at press time. 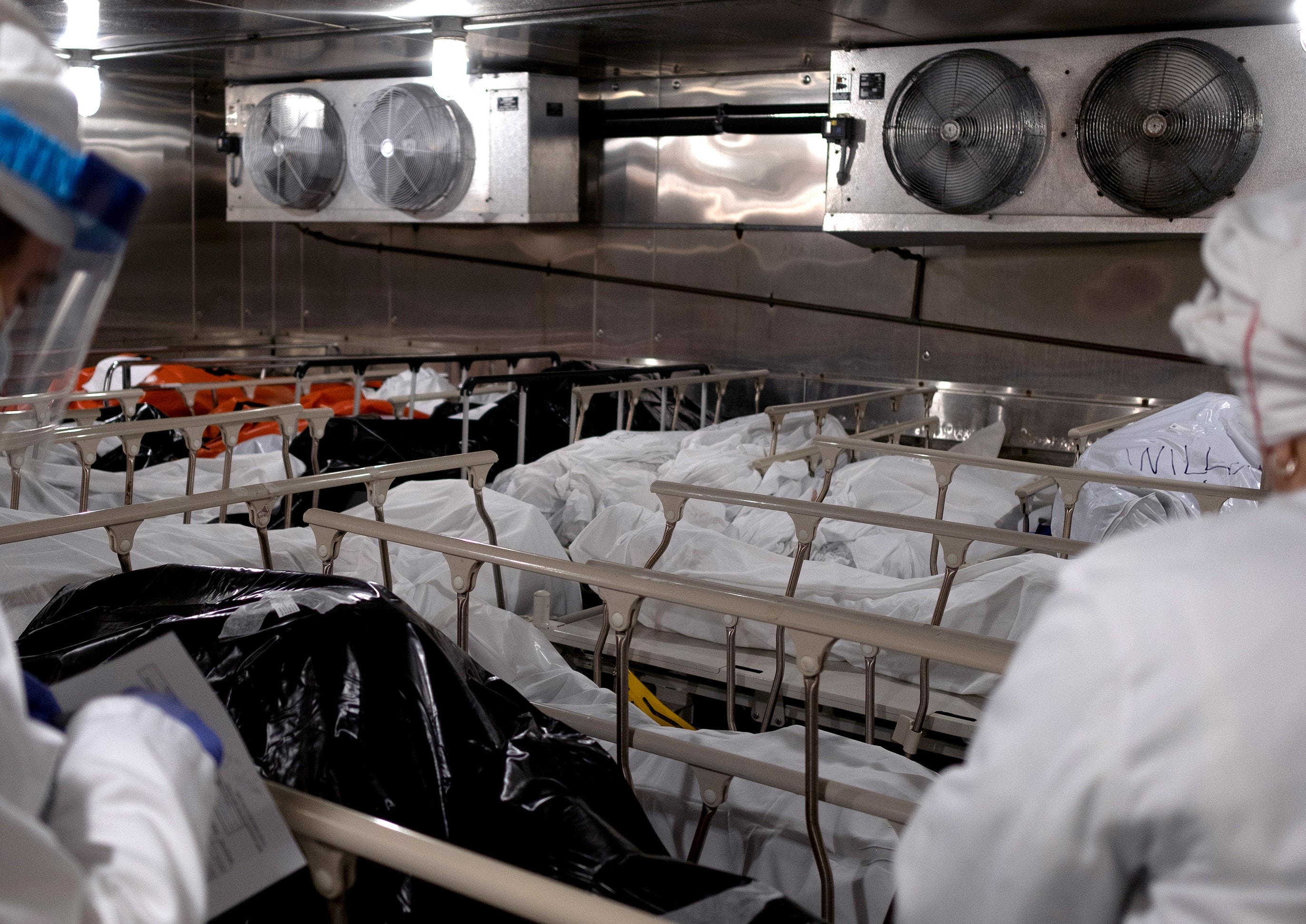 A view inside the morgue in the hospital.

Armed with paper suits, masks, plastic face shields, gloves, and a desire to ease the strain on hospital staff, Speak and fellow workers have had to make ghastly workarounds that, just two months ago, would have seemed unimaginable to anyone familiar with the city’s system for processing the dead. While the wooden shelves that line the trucks are clearly designed to hold just a single body each, for the past two weeks, they have been putting two on each shelf, arranging them head to toe to make them fit.

“They’re literally getting stacked on each other,” Speak said.

Speak emphasized that, even in the face of such gruesome logistical challenges, he and his fellow volunteers strive to treat the bodies with the utmost respect and caution. “The worst part is the fact that these people are alone,” he said, noting that family members most often can’t visit coronavirus patients in the hospital — or be with them when they die. “It’s weird, but we talk to them sometimes when we’re moving them,” he added. “We sort of take care of them — put a hand on their forehead or on their hand. Especially the ones that have died within 30 minutes or so.” 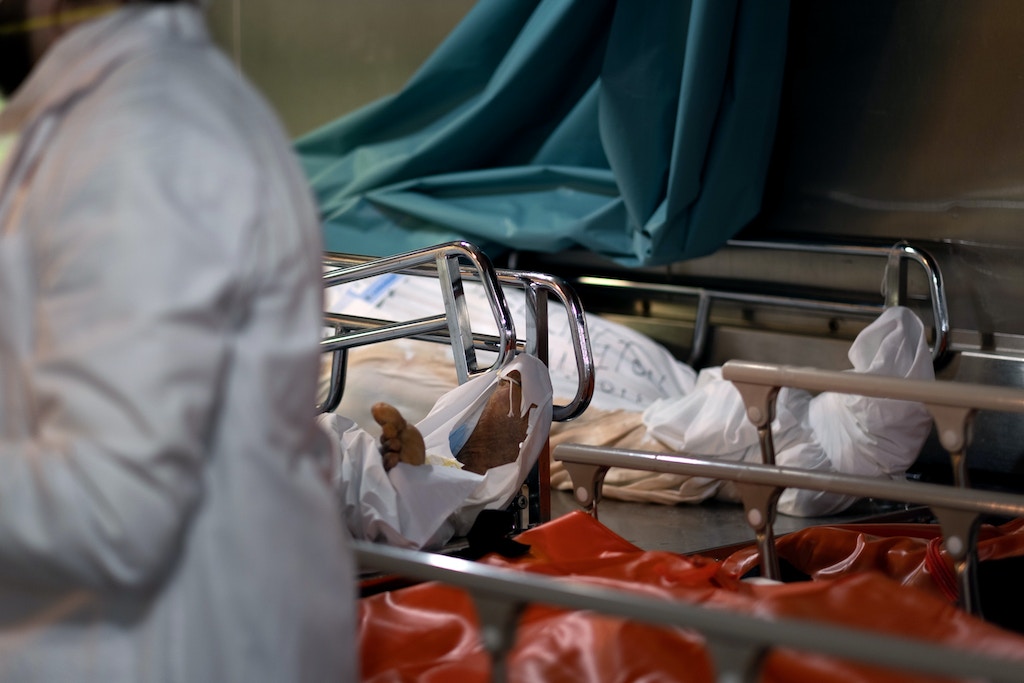 There is a shortage of body bags, and many of the ones on hand are prone to tearing. Left/Top: Workers have been forced to put two bodies on shelves designed for one. Right/Bottom: A view inside one of the trucks, which is the least refrigerated and has begun to smell.Photos: Devin Speak

But a shortage of supplies and the sheer numbers have made it difficult to give the dead the dignity they’re due. For one thing, there aren’t enough body bags. And while some of inadequate supply are durable, others are of lower quality. “The cheap bags will tear, and the pooled fluids spill out onto the bottom of the truck,” said Speak. When they run out of even these flimsier bags, Speak and his co-workers tear up garbage bags and tape up the bodies with the plastic and bed sheets.

Meanwhile, funeral homes are also straining to keep up with the relentless pace of deaths. “We’ll get a funeral home roll by and they’ll pick up four or five, but as soon as they’re gone, we replace them with people off the floor,” said Speak, who noted that the workers were sometimes transporting several bodies in minivans and pickup trucks rather than hearses. Because of the backlog, some bodies remain on the shelves of the mobile morgue for weeks. To make matters worse, the trucks haven’t been as cool as they should be. The refrigeration is especially weak in one particular unit, which has begun to smell.

After leaving a grisly shift, it can seem unimaginable that people are pondering reopening the country without a clear strategy for avoiding a resurgence of deadly coronavirus infections. The idea that people would risk their lives and those of others is “insane,” said Speak. “If they want to work so badly, they should come help me handle a few hundred bodies.”