The megacorporation, which got almost $5 billion in relief funds, hired pricey union-busting consultants to sway the vote. 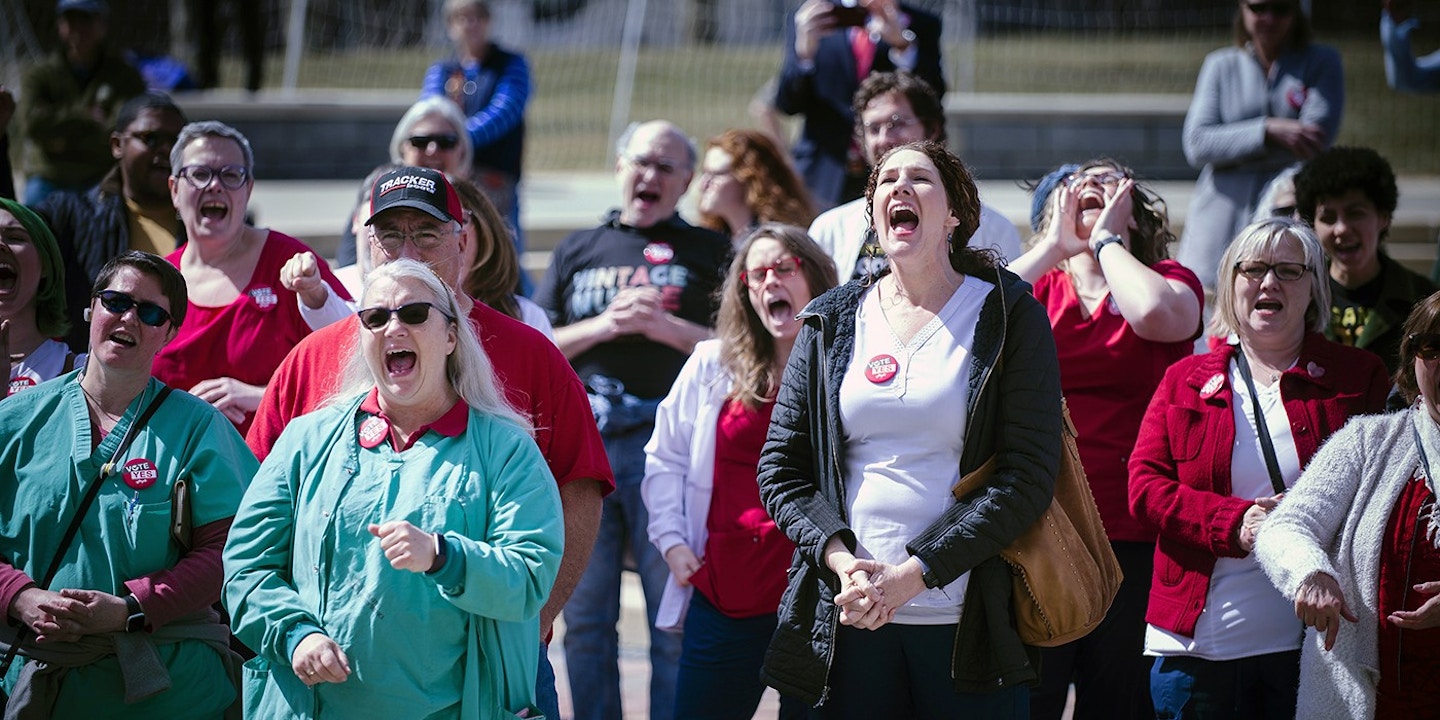 The largest hospital corporation in America, HCA Healthcare, is using the coronavirus pandemic to delay and undermine a union election for 1,600 nurses in North Carolina.

After nurses filed in March to hold an election, HCA Healthcare petitioned the National Labor Relations Board, or the NLRB, to delay the vote because of the pandemic. In the meantime, it hired professional union busters costing $400 an hour to conduct meetings inside Mission Hospital in Asheville, urging nurses to oppose joining a union.

And while the corporation stands to rake in $4.7 billion in CARES Act benefits, the number of coronavirus cases in North Carolina is steadily growing, and nurses say they had to fight for basic personal protective equipment, or PPE.

“Instead of HCA using those resources and money and effort to prepare for Covid-19 and have proper PPE, they chose to put it into union busting instead,” said Sarah Kuhl, a registered nurse with Mission’s oncology research department.

“I feel like that put us significantly behind to being adequately prepared for Covid-19,” Kuhl said.

HCA Healthcare has 184 facilities in the United States and the United Kingdom. HCA CEO Sam Hazen makes $27 million annually — 478 times the median HCA employee, and the company paid out over $600 million in dividends to shareholders last year. Of HCA’s $51.3 billion in revenue in fiscal year 2019, over $21 billion of that came from the government in payments from Medicare and Medicaid. In 2000, the corporation pleaded guilty in the case of the largest Medicare fraud in U.S. history and paid $1.7 billion in fines. U.S. Senator Rick Scott, R-Fla., was CEO at the time.

In February 2019, HCA turned its sights to North Carolina. The for-profit, multinational conglomerate purchased the nonprofit Mission Hospital for $1.5 billion. Since being absorbed into HCA, Mission has been plagued by widespread complaints over cuts in staff, poor communication, and lack of access to basic supplies and PPE. The nurses filed for an election in March, with 70 percent of them signing union authorization cards, to join National Nurses United — which has 150,000 members and currently represents nurses at 19 HCA facilities across the country.

Since being absorbed into HCA, Mission has been plagued by complaints over cuts in staff and lack of access to basic supplies and PPE.

Only 37 out of HCA’s 184 hospitals have a union presence. The majority of HCA facilities are located in states with low union density like Florida and Tennessee, where the corporation is headquartered. In North Carolina, just 2.3 percent of the workers are union members.

“Our campaign is an enormous thing for North Carolina and the South,” said emergency room nurse Trish Stevenson. “This would set an enormous precedent for change, and it could happen nationwide for nurses. Health care is in dire need of a shift away from profit-driven corporations.”

HCA’s attorneys are now arguing before the NLRB that the vote should be further delayed, claiming in filings submitted to the NLRB that “[HCA] submits the election should not be scheduled prior to or during the time it and its healthcare professionals, including Registered Nurses, are dealing with the surge of Covid-19 patients and caring for those patients.”

But the megafirm has still found the time and money to wage an aggressive anti-union campaign inside the hospital, demanding nurses leave their shifts to meet one-on-one with consultants from the Crossroads Group. HCA declined a request for comment from The Intercept.

On March 15, nurse Jill Rabideau was pulled away from her patients on the pulmonary step-down unit to join a group of other health care workers for a “Labor Relations” session led by a union-busting consultant.

“It was an hour and 15 minutes of listening to an angry little man in a room that probably had 15 other nurses that were pulled off their units,” Rabideau said. “That was very frustrating to me, but particularly when everybody had all these Covid questions.”

Kuhl attended a meeting with anti-union consultants on March 13. “If you are coming in there without a whole lot of knowledge about unions and you don’t do any more research, then it can be misleading,” said Kuhl. “A lot of things we heard is that you won’t be able to talk to your manager anymore,” Kuhl said. “We heard you won’t get wage increases until the contract is signed, which is not true.”

“We couldn’t afford to let staff go to attend the meeting, but they were demanding it.”

On March 24, Stevenson was working in the emergency room when she was asked to cover for another nurse so her colleague could attend a one-on-one meeting with a consultant.

Facing an upsurge in Covid-19 patients, Stevenson recalled, “We couldn’t afford to let staff go to attend the meeting, but they were demanding it.”

“They were just demanding that we cover nurses on their assignment, even though it’s inappropriate because we just couldn’t afford to let staff go at that time.”

Nurses throughout the hospital were already reeling from staff cuts, an exodus of experienced RNs, and rising nurse-to-patient ratios in the wake of HCA’s takeover of Mission — problems that are all exacerbated by the pandemic.

“We’re already in a state of red and then we’re being faced with a pandemic that is just further going to compromise us,” Stevenson said. “My worry is we just won’t be able to respond at all to the pandemic.”

The situation “demonstrates the tensions and hypocrisy of a hospital chain taking advantage of the provisions of the law but at the same time — exploiting the law to take advantage of the nurses,” said Liebman.

“The neutrality language is very important so that companies or lawyers that are benefiting from these loans aren’t using them to fight unionization,” said Liebman.

HCA has disclosed that it will accrue over $4.7 billion in benefits from the CARES Act, from direct payments to hospitals, accelerated Medicare payments, payroll tax deferrals, and other benefits. On an April 21 earnings call, HCA CEO Sam Hazen told Wall Street analysts “Fortunately, I see HCA Healthcare as uniquely positioned to help define the new normal and capitalize on new opportunities.”

John Logan, a labor historian at San Francisco State University, noted the irony of HCA’s actions during the Covid-19 pandemic.

“[Nurses] really are organizing to have a voice over life and death issues,” said Logan. Speaking generally of anti-union campaigns in the health care space, Logan said, “Hospital administrators still think that it’s appropriate to bring in outside consulting firms that cost millions of dollars.” Hospital anti-union campaigns can cost well over $1 million, a report from the Economic Policy Institute found last year.

“I think in some ways there’s been an intensification of anti-union campaigns because employers believe they can get away with things right now that they wouldn’t in normal circumstances” Logan said.

With a for-profit megacorporation newly in charge of their hospital, nurses had witnessed working conditions and patient care standards deteriorate rapidly. When the pandemic hit, union nurses acted quickly, demanding safe policies for PPE and transparency about the hospital’s plan for Covid-19 response.

“Some members of the community are thinking, ‘Why are [nurses] trying to organize a union during this pandemic?’” said Kuhl. “Organizing a union during this pandemic is more important than it was before Covid-19 existed. If we don’t get the things that we need to care for the patients who will be affected by Covid-19, either directly or indirectly, the outcome is going to be bad.”

“That’s why even though we don’t have a union yet, we did the PPE petition,” said Kuhl. “It was vital. Time was of the essence that we do that to ensure safety for our patients during this pandemic.”

Before the nurses submitted a petition for PPE on April 2 during the pandemic, said 35-year nurse Kelly Tyler, management “came through one day and gathered up all the masks, even if you were wearing a mask, they asked you to take it off. You had to go through the house supervisor to get a mask for patient care.”

After the petition was delivered, noted Tyler, HCA “made masks mandatory in patient care areas,” a victory for union nurses. “Maybe it’s not out of the goodness of HCA’s heart that they are doing this, maybe it is from the union and our demands,” Tyler said.

“There was zero transparency about how much PPE we had,” said Kuhl. “We weren’t getting information about how many Covid patients we had. None of that was information that we were privy to until we used collective action to get that information. That was a direct result of the union.”

Despite the delayed vote, Rabideau is confident of victory when the election is finally held. In the midst of the coronavirus pandemic and its uncertain aftermath, Mission nurses say that the cost of losing would be too high.

“[Nurses should] not always be the ones giving up to make corporations thrive because the price is not acceptable,” Rabideau said. “The actual cost is at the expense of our patients. … Nurses are not OK with that. I can say that unequivocally. We didn’t become nurses to make a shareholder wealthy.”