The absurd drama of Donald Trump finally acting like a normal human being by wearing a mask — a public health measure to combat the spread of the pandemic coronavirus he resisted from the moment he announced it three months ago, and then mocked others for following — came to an end on Saturday as the president took part in a carefully staged photo-op during a visit to Walter Reed Military Medical Center in Maryland.

WATCH: President Donald Trump wears a mask during a scheduled visit to the Walter Reed National Military Medical Center, a rare instance of doing so publicly as #coronavirus cases continue to pile up in the U.S. pic.twitter.com/Ksz3vQOryn

But before Trump posed for the cameras, lumbering slowly down a hospital corridor flanked by masked military officers — an image his senior campaign advisors seemed to think was the coolest thing since the “Reservoir Dogs” title sequence — the president made a point of undercutting the public health advice once more.

On his way to the hospital, Trump stopped to tell reporters that he was not endorsing the sort of routine mask-wearing mayors and governors have been begging Americans to embrace to curb the spread of Covid-19, as the death toll neared 135,000.

Masks, the president said as he left the White House, “have a time and a place.” Specifically, Trump explained, “when you’re in a hospital,” as he would be, “talking to a lot of soldiers and people that in some cases just got off the operating tables.”

In other words, the president made no effort to cast the wearing of masks as an inconvenient but necessary precaution to take in non-medical settings, like grocery stores or restaurants, where his supporters have been filmed day after day refusing to cover their faces, while loudly insisting that health orders intended to combat the pandemic are some sort of Democratic hoax.

Trump had also explicitly connected mask-wearing to being in a hospital in a conversation on Thursday with Sean Hannity. “I think it’s fine to wear a mask if it makes you feel comfortable, and I think under certain conditions, like when you’re going into a hospital,” Trump told Hannity. “I expect to be wearing a mask when I go into Walter Reed. You’re in a hospital so I think it’s a very appropriate thing.”

Just moments later, however, Trump pivoted back to mocking his Democratic rival, former Vice President Joe Biden, for wearing a “massive mask” earlier that day when he arrived to address metal workers at McGregor Industries in Dunmore, Pennsylvania. Video of Biden’s address shows that the cloth mask he wore as he took the stage at the plant on Thursday was nearly identical in size to the one Trump wore on Saturday. 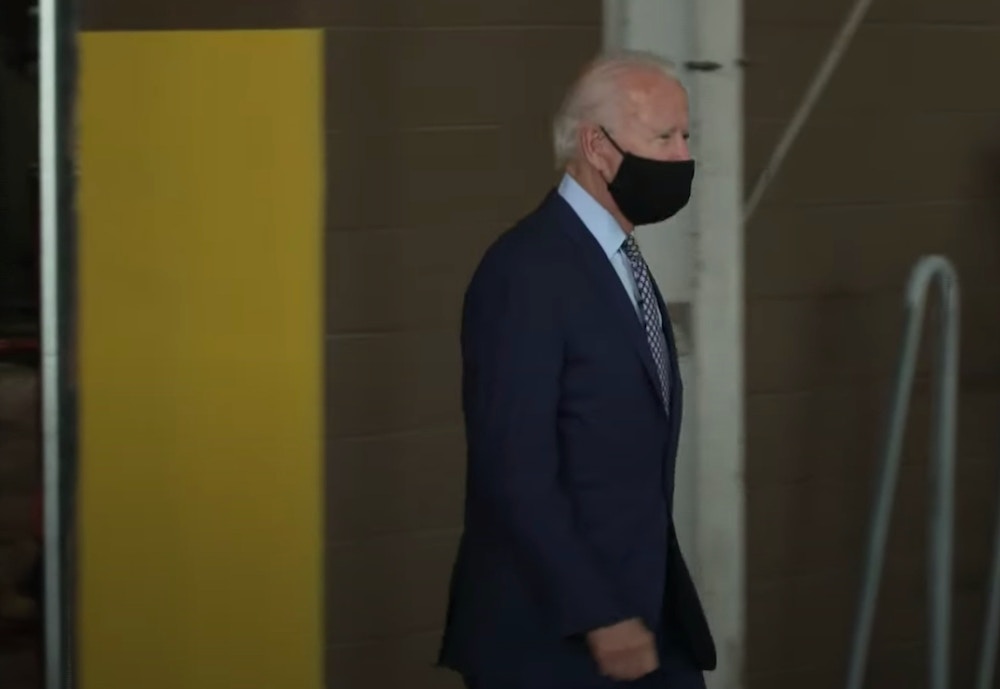 Former Vice President Joe Biden wore a mask before a speech on Thursday at McGregor Industries in Dunmore, Pennsylvania.

In contrast to Trump, Biden has taken his responsibility to model good behavior by wearing a mask in public seriously, and has urged all Americans to do so in frequent social media posts.

This Fourth of July, one of the most patriotic things you can do is wear a mask.

During the former vice president’s Pennsylvania factory visit on Thursday, his campaign even used an image of Biden in an N95 mask on the shop floor to take a jab at Trump.

Donald Trump couldn't even try to look this cool in a mask. pic.twitter.com/Ac1jABJKXZ

In another campaign against a very different opponent, Biden might have come in for some criticism because the specific type of N95 mask he wore that day — 3M’s Particulate Respirator 8210V — has a “cool flow valve,” which makes it ineffective at protecting others because it filters only air inhaled and not exhaled. But of course Trump, having spent months refusing to wear a mask at all, and deriding those who did, was in no position to attack Biden for wearing the wrong kind of mask during one part of his visit.

As Matt Gertz of Media Matters for America reported recently, Trump’s successful effort to make mask aversion part of a broader culture war has been aided by Fox News hosts like Tucker Carlson and Laura Ingraham. “Carlson, Ingraham, and several of their colleagues have denounced masks and those who promote them, even as evidence has accumulated that masks are one of the most effective countermeasures against the coronavirus,” Gertz observed earlier this month. “The network’s viewers have been told that mask usage is not only ineffective, but part of a conspiracy by Democrats and the media to keep Americans living in fear and under their control.”

In April, Ingraham defended Vice President Mike Pence for not wearing a mask at the Mayo Clinic by claiming there was some doubt over the effectiveness of blocking transmission of respiratory droplets, which there is not. “They’ll say this whole mask thing is settled science, just like they do with climate change,” she told viewers. “Of course it’s not.”

Laura Ingraham criticizes 'the media': "They'll say this whole mask thing is settled science, just like they do with climate change. Of course it's not" pic.twitter.com/DucraJXzlU

In May, Carlson began one of his shows by claiming that “citizens who remain stuck in Los Angeles are effectively hostages” of Mayor Eric Garcetti. The mayor, Carlson fumed “has demanded that anyone who goes outside for any reason, as the heat rises in L.A., must wear a mask.”

Tucker kicks off the show by claiming that citizens are LA are "hostages" because of the mandate to wear masks when they go outside as the lockdown is rolled back. pic.twitter.com/G8glMJPcYz

“It goes without saying that there is no science backing up this order or any of Garcetti’s so-called health decisions,” Carlson claimed, absurdly. “In fact, it’s possible that requiring masks outside will not prevent a single person from being infected in Los Angeles.”

In recent weeks, as Covid-19 cases have spiked in states like Texas, Arizona and Florida, which followed Trump’s advice to relax restrictions before the virus was suppressed, some state and local Republican officials, including Gov. Greg Abbott of Texas have broken with Trump by requiring the public to wear masks. Others, like Gov. Ron DeSantis of Florida, have resisted issuing state-wide mask order. DeSantis refused to act even as his state confirmed 15,299 new Covid-19 infections on Sunday, the highest total recorded by any state in a single day during the pandemic.

Gov. Doug Ducey of Arizona, who had previously barred cities and towns from issuing local mask orders, lifted that ban last month. Although Ducey was one of the few people wearing a mask at Trump’s rally in a Phoenix megachurch last month, he has still not issued a state-wide order requiring face coverings.

In many states run by Democratic governors, Trump supporters, including anti-vaccine activists, have staged angry protests against mask orders.

The corporate hierarchy at Fox News is now trying to follow the same path as the more proactive Republican leaders. While it might be too late to undo all of the damage the network has helped the president inflict on the public messaging campaign, Fox has even produced a series of public service announcements featuring Hannity, as well as the hosts Bret Baier, Martha MacCallum, Maria Bartiromo and Steve Doocy, in which they all advise Fox’s largely elderly audience to heed guidance from the Centers for Disease Control and wear masks.

Fox News, no doubt concerned about the impact of Covid-19 on its largely elderly audience, is making an effort to convince them to wear masks. Here's a PSA running before clips on their website in which Sean Hannity says, "I don’t have a problem wearing a mask." pic.twitter.com/IShSsP6Vn0

Fox News, trying to keep its audience alive, is now urging them to listen to the CDC instead of Trump. Here's a PSA running before clips on their site featuring Maria Bartiromo and Steve Doocy, two people Trump frequently talks at. "Wear a mask... whenever you leave the house." pic.twitter.com/U152Thdbyq

Don't tell Brit Hume, but Fox News wants its viewers to survive the pandemic, so they are running this PSA before clips on their website in which Bret Baier and Martha MacCallum tell them to listen to the CDC and wear masks. https://t.co/ffm4sBXDSI pic.twitter.com/NE7EqN6XZh