Joe Biden Promises a Moral Renewal for the U.S. Here’s Where He Can Start.

To take seriously Biden’s claim to moral leadership in foreign policy, he should apologize to the victims of the post-9/11 wars. 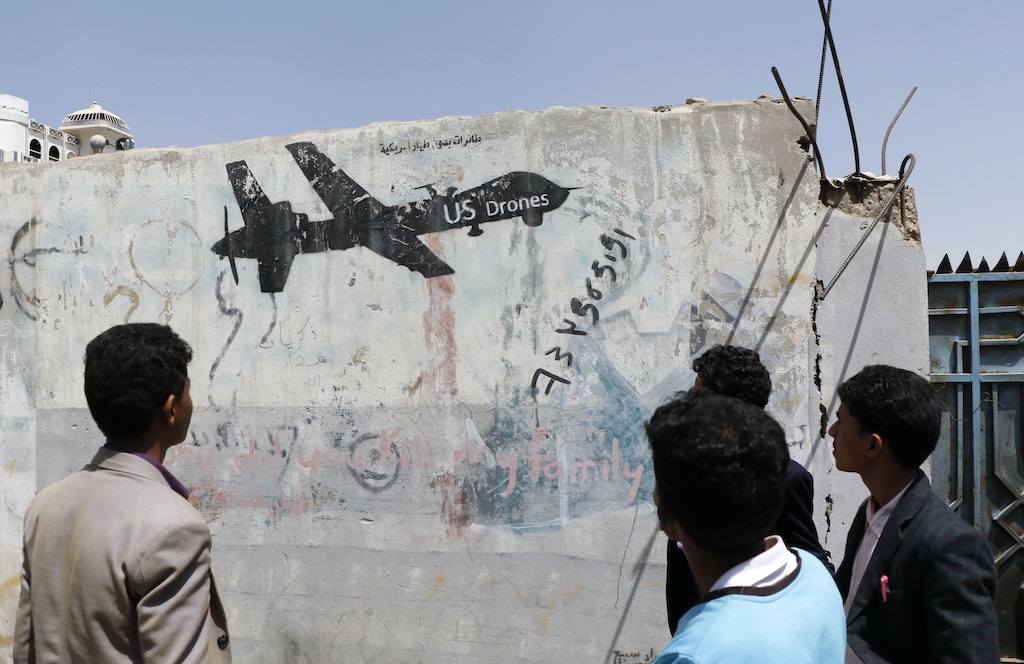 A Yemeni man looks at graffiti protesting against U.S. drone strikes on Sept. 19, 2018 in Sana’a, Yemen.

If there has been a silver lining to Donald Trump’s presidency, it’s that it’s been an impetus for some form of national self-reflection in the liberal establishment. That urge has manifested itself in Joe Biden’s campaign, which has gone to great lengths to portray itself as one of moral renewal after the degradation of the Trump years. Promising a return to a more familiar style of U.S. foreign policy, Biden’s platform claims that under his leadership, the United States can “reclaim our longstanding position as the moral and economic leader of the world.”

It is no defense of Trump to say that a straightforward “return to normal” is in no one’s interest. A major legacy of the governing establishment of which Biden is a champion are the post-9/11 wars that have killed hundreds of thousands of people in the Greater Middle East, wrecked entire societies, and caused great trauma to the minority of Americans who have sacrificed their lives, family members, or mental and physical well-being in combat.

Biden himself has played a role in this dismal history. As a U.S. senator, Biden voted in favor of the disastrous 2003 U.S. invasion of Iraq, later floating a plan to partition the country along sectarian lines that many warned would have plunged it into even greater chaos. Making matters worse, he has often equivocated on his decisions rather than honestly confronting them under questioning.

There is not much to gain by dwelling forever on the wounds of the past. But in order to take seriously Biden’s claim to moral leadership in foreign policy, there is a minimum debt that he — and other U.S. political leaders responsible for the post-9/11 wars — owes to those who have paid the price for their destructive fantasies: an apology.

American leaders are famously averse to apologizing, viewing it as something that degrades rather than ennobles a powerful nation. “I will never apologize for the United States, I don’t care what the facts are,” former President George H.W. Bush affirmed in a 1988 speech delivered to a group of Republican leaders. Bush père stuck to his no-apologies policy even while overseeing serious moral outrages during his term. These types of acts may not have penetrated America’s innocent self-image. But they’ve hardly escaped notice abroad.

It is often argued that the United States had good intentions behind even its worst foreign policies. But outcomes also matter. After all the death and destruction wrought by the 2003 U.S. invasion, Iraq today is an even worse place to live than it was under Saddam Hussein: a chaotic mafia state where ordinary people live in fear of a hundred petty tyrants rather than one great one. In Afghanistan, after two decades of war, the United States is preparing to make peace with the Afghan Taliban — something that it could have spared Afghans much suffering by doing on far more favorable terms as far back as 2002. Rarely in history has so much toil been expended to make people worse off than when they began, including Americans.

U.S. governing elites have coped with these incredible failures by generally either ignoring or denying them. Insulting the American public by refusing to honestly acknowledge the reality staring them in the face, that the wars begun with grand promises had ended in total calamity, helped open the way for Trump’s presidency. However disingenuously, Trump was able to call out something that was glaringly obvious to average Americans but that political leaders refused to acknowledge.

This is no defense of Trump, who has continued the worst traditions of the same elite establishment that he once harried — including by pardoning a war criminal. But returning to the exact status quo that made his rise possible in the first place hardly makes sense. It took a toxic brew of selfishness, greed, decadence, and sectarianism to elevate someone like him to the White House. But it also took a lot of killing and dehumanization of innocent people around the world. An injured Afghan youth receives treatment at a hospital following a suspected U.S. drone airstrike in the Achin district of Nangarhar province on Sept. 28,2016.

Conservative figures calculated by the Brown University Costs of War Project estimate that U.S. wars in Iraq, Afghanistan, Syria, Yemen, and Pakistan have killed over 800,000 people. We will never know the true cost in the numbers of lives destroyed by injury, bereavement for lost loved ones, or the destruction of homes and livelihoods. Thousands of U.S. soldiers and contractors have also been killed or left with physical and mental wounds that will follow them for the rest of their lives. Intoxicated by the maelstrom of crises, both domestic and global, there has been little accounting for these tragedies ­­– the impact of the wars did not even bear mention at the Democratic National Convention. But in the end, a catastrophe of this scale can’t just be brushed aside.

There is no monetary amount that can counteract the destruction of people’s lives on the scale caused by the global war on terror. Any question of financial reparations for the victims of war is unlikely to gain much traction, particularly since the United States is unable to seriously consider them for historic injustices closer to home. The U.S. military sometimes makes paltry cash payments to the families of the civilians it kills, but despite recent reforms, the military has continuously failed to account for all the civilians it has killed or injured. That, as well as the often-insufficient support the military gives to its own suffering veterans, can add insult to the injury that people have already suffered.

But an apology can give something of value that money cannot. Simply acknowledging the scale of harm caused and taking responsibility for it would give the huge number of innocent victims a measure of restorative justice. The idea is popular and has been suggested in other contexts as well. In a speech at Oxford Union in 2015, Indian politician Shashi Tharoor laid out the incredible harms that British colonialism had inflicted on India. Instead of asking for some incalculable financial restitution, Tharoor ended by asking simply for an apology acknowledging this terrible past, as well as the payment of 1 pound per year to the Indian government in symbolic recognition.

If he is serious about his rhetoric of moral leadership, Biden can begin with taking responsibility for events that happened under his watch.

That British apology never came. But the United States would do well to apply Tharoor’s advice to the victims of its own imperial endeavors, including those that the current Democratic nominee played some role in. If Biden were to issue a national apology for the past two decades of failed and misguided wars — directed at the wars’ foreign victims, as well as Americans who have directly borne the cost — that would help rebuild America’s reputation around the world. It might also help rebuild the trust of Americans in their own elected leaders, who have spent many bitter years disastrously failing to live up their promises and then refusing any responsibility for their failures.

Recent U.S. history offers examples of leaders issuing apologies for past harms inflicted, as well as crimes of omission that took place on their watch. There are many other unacknowledged wounds in American history that continue to fester, but if he is serious about his rhetoric of moral leadership, Biden can begin with taking responsibility for events that happened under his watch. An apology for the post-9/11 wars is neither crazy or unthinkable, nor would it mean taking the blame for every problem in the Greater Middle East. It would convey genuine strength and self-confidence, rather than the vacuous type embodied by the current resident of the White House.

In 1965, amid the U.S. war in Vietnam, the anti-war activist and academic Eqbal Ahmad reflected on the contrasting views he observed of the U.S. invasion at home and abroad. “I know how Asians feel about America’s action,” Ahmad wrote. “They call it neocolonialism; some think it is imperialism. I know this is very wrong because Americans are naturally sympathetic to people’s struggle for freedom and justice, and they would like to help if they could.”

More than a half-century later, I still believe this is true. The world could still use an America that actually lives up to its rhetoric about itself. But that can only come with an honest accounting of the past, without which there can be no closure. The way to rebuild the moral standing of a great nation stained by a moral injury is neither through endless self-flagellation or arrogant denial. It comes from the humility and decency of expressing that one has done wrong — and apologizing to the people that they have harmed.