Despite billions spent on intelligence and surveillance, U.S. law enforcement permitted an armed Trumpist mob to sack the Capitol. 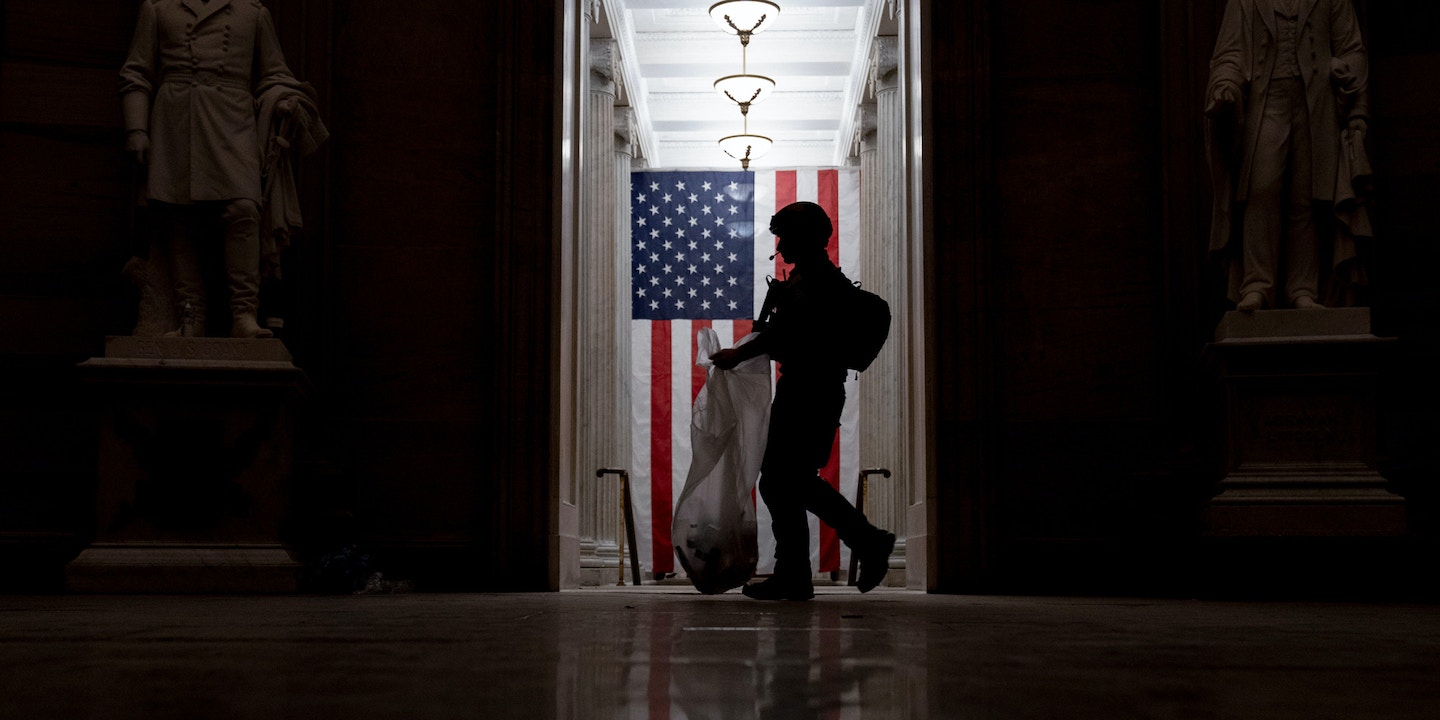 Just hours after being the site of a historic siege, the scene outside of the U.S. Capitol was eerie but quiet. The crowds were gone, and the tear gas had lifted. The only sound on the streets was the occasional siren in the distance. From police cruisers to blacked-out SUVs, nearly every vehicle on the road belonged to one law enforcement agency or another. A few dozen TV anchors filed reports from the Capitol’s southwest side. Over their shoulders, camouflaged government employees of unclear affiliation ambled about, relocating their shields and other tactical gear. Closer to the building, a column of black-clad riot cops shuffled through shadows, visible only by the glint of their helmets.

The law enforcement presence Wednesday night, like the one used on protesters at Donald Trump’s inauguration in 2017 and Black Lives Matter protesters in 2020, was a reminder that the capital of the world’s most powerful country does not lack for security forces. As a collective body, the agencies are abundant and well-armed, and they are tapped into a billion-dollar intelligence-sharing apparatus. Not that Wednesday’s rally was some secret, nor was its conclusion unforeseeable. The rally that preceded the storming of the Capitol had been hyped for weeks, including by the president himself, who for the past four years has had a direct relationship to many acts of staggering right-wing violence.

“It definitely shows the ineffectiveness of the intelligence network that we’ve built since 9/11 — that the Capitol Police would not have been prepared for an assault on the Capitol that was planned in public,” Mike German, a fellow at the Brennan Center for Justice and former FBI agent specializing in counterterrorism, told The Intercept. “It wasn’t as if this was a spontaneous gathering. This was an event that had been planned for weeks, and it was very clear in the social media activity and public statements of these militants what they intended to do.”

The onslaught came as Congress met to certify Electoral College votes for President-elect Joe Biden. In response, the president’s supporters organized a “Stop the Steal” rally that drew thousands of demonstrators into the heart of Washington, D.C. It was just before 1 p.m. when the crowd, with the president’s encouragement, began toppling barricades and pushing their way past Capitol Police. Rep. Chris Pappas, a New Hampshire Democrat, who was among the lawmakers rushed from the building, described the speed with which the crowd overwhelmed the Capitol Police as “breathtaking.”

In a statement released Thursday, Capitol Police Chief Steven A. Sund, said his officers “responded valiantly when faced with thousands of individuals involved in violent riotous actions,” and noted that nearly 20 state, local, and federal agencies, including the National Guard, responded to the day’s events. More than 50 officers were injured, he said, adding, “The violent attack on the U.S. Capitol was unlike any I have experienced in my 30 years in law enforcement here in Washington D.C.” According to reports Thursday, the Metropolitan Police Department had “no intelligence” suggesting “there would be a breach of the US Capitol.”

German, the former FBI agent, said, “There needs to be a serious inquiry into the intelligence breakdowns and the tactical breakdowns that allowed the capital itself to be breached, particularly by people with weapons.” Adam Isacson, the D.C.-based director of the defense oversight program at the Washington Office on Latin America, linked the events to a broader politicization of law enforcement under Trump, reminiscent of the anti-democratic movements the U.S. has historically sponsored in countries around the world. “You don’t get to ransack the Capitol for hours, then calmly walk away, unless law enforcement and its command share your views,” he wrote. “What we saw yesterday was tacit approval of the rioters. Full stop.”

For those who have followed far-right violence during the Trump presidency, the most shocking thing about the events of January 6, 2021, may be just how predictable it all was. In an address before the violence began, the president, who had long made clear that he had no interest in conceding the election, reminded his supporters that they had been wronged by evil actors and that it was up to them to fight back for the fate of the country. He anointed them the stars of their own action movie, with the final climactic scene now at hand. “If you don’t fight like hell,” Trump warned, “you’re not going to have a country anymore.” He told his followers that together they would march on the Capitol and make their voices heard. Of course, he personally did not do this — Trump climbed into an armored vehicle and left the scene — but his supporters did precisely what they were told to do.

The insurrectionary mob was met with some resistance as they descended on the Capitol — some, but not much. Police did use chemical agents against the crowd, but by and large the response bore little resemblance to the iron-fisted crackdown on racial justice protesters witnessed in Washington, D.C., and cities across the country just months before. The rampagers shouted at the police, calling them traitors, and threw punches at officers without consequence. Trump’s red-capped supporters then crashed through windows and doors of the Capitol. Some waved the flag of the Confederacy; many more carried banners bearing the president’s name. While some Capitol Police officers swung their clubs at the advancing insurgents, at least one indulged them with a selfie. Left/Top: Protesters breach a door of the U.S. Capitol during a joint session of Congress to count the electoral votes of the 2020 presidential election. Right/Bottom: Demonstrators clash with police inside the U.S. Capitol in Washington, D.C., on Jan. 6, 2021.Photo: Erin Scott/Bloomberg/Getty Images; Chris Kleponis/Sipa USA/AP

Tear gas was deployed inside the building. Lawmakers pulled gas masks over their heads and took shelter under benches and desks before being evacuated to secure locations. “When the people fear the government, there is tyranny… When the government fears the people… There is liberty,” Enrique Tarrio, leader of the Proud Boys, a right-wing paramilitary group loyal to the president, posted on right-wing social media network Parler, attaching a photo of people in hiding in the House Chamber. Tarrio, who was arrested this week on weapons charges, told the Wall Street Journal that he expects the insurrection to continue in the days to come.

At least one woman was shot and killed by police during Wednesday’s assault. Three more died from medical emergencies, the Associated Press reported. When they were through, Trump’s irregular forces walked out of the building triumphant and unmasked, smiling as a law enforcement officer held the door for them. “We love you. You’re very special,” the president said to his supporters in a video message, telling them they could now go home. Police reported recovering pipe bombs outside both the Democratic and Republican National Committees, as well as a long gun and Molotov cocktail.

As an FBI agent in the 1990s, German went undercover inside far-right groups during a period of intense bloodshed and violence, including the Oklahoma City bombing. In the two decades since the September 11 attacks, the threat of white supremacist and far-right militant violence has been steadily deprioritized, German explained, even as the election of the first Black president led to an explosion of activity in that community. From the outset of Trump’s presidency and the infamous white power riot in Charlottesville, Virginia, the deadly consequences of law enforcement’s disinterest in confronting the far right has been plain to see, replayed again and again in cities across the country, including the capital.

“Failure to react to the threat in Charlottesville is exactly the same as what happened today.”

“Failure to react to the threat in Charlottesville is exactly the same as what happened today,” German said. “Violence that was planned and organized in plain sight was ignored by the intelligence network, and that network includes the Joint Terrorism Task Forces in the state and local fusion centers.”

When protests over the killing of George Floyd erupted over the summer, the nation’s post-9/11 system for distributing threat information lit up with intelligence reports. As The Intercept reported in July, internal law enforcement documents showed detailed reporting on emerging threats from the far right, which were born out in the apparent targeted assassination of a federal court security officer and a sheriff’s deputy in California by a military-trained right-wing extremist, as well an alleged bomb plot targeting a Black Lives Matter protest. Though evidence of such threats was shared with the White House and the nation’s top federal law enforcement agencies, it was competing against a much larger stream of information circulated through the nation’s notoriously unreliable and often politicized network of homeland security fusion centers.

As a result, German said, police agencies across the country ended up “far more focused on the fever dreams of the far-right media echo chamber, looking at piles of bricks at construction sites and imagining that they were staging areas for antifa super-soldiers who were funded with bitcoin,” than they were on a movement with a long and bloody history of terrorist violence in the United States. Then-Attorney General William Barr, the nation’s top law enforcement official, backed the president’s line of an existential threat from the left, calling on the FBI’s Joint Terrorism Task Forces to hunt down “agitators” in an aggressive prosecutorial campaign that swept up police brutality protesters across the country.

As of Thursday morning, law enforcement in Washington, D.C., had arrested 68 people and counting for offenses related to the attack on the Capitol. The FBI was seeking public assistance in identifying others. “A big part of problem, and what has encouraged the most violent elements within these movements, is that they had top cover,” German said. “The president of the United States was encouraging them to act, and when state and local law enforcement and federal law enforcement didn’t respond to their public acts of violence, that conditioned them to believe that that was not only authorized, but desired by the authorities — that this was state-sanctioned violence that they were committing.”

That kind of conditioning doesn’t disappear overnight, German said, even with a change in the White House. “This isn’t over,” he said. “This isn’t a one-day thing for people who are convinced that President Trump won the election and is illegitimately being denied office. Now that their feigned affection for law enforcement is shown to have been a ruse, I think it’s going to be very dangerous for law enforcement and obviously for the public in general and other elected officials.”