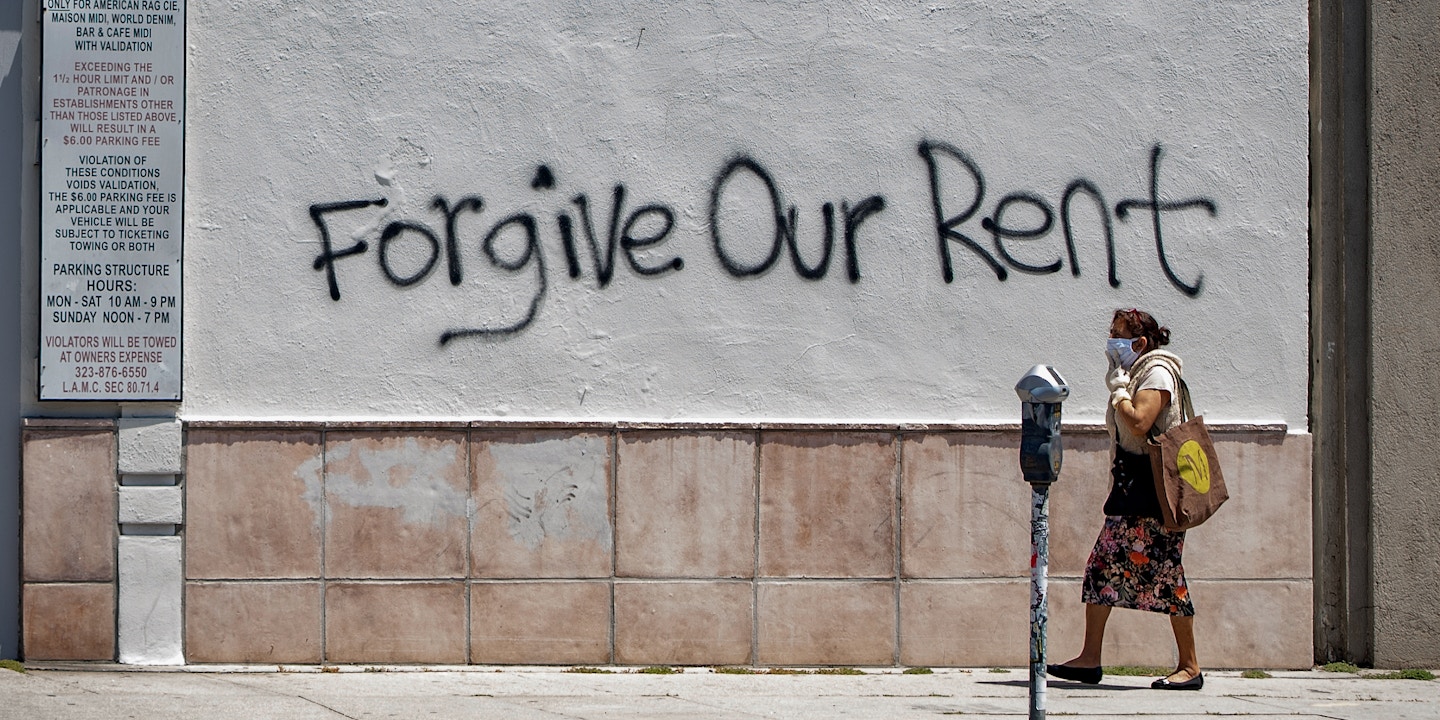 Jewel Burgess, 40, first applied for emergency rental assistance in Washington, D.C., last year, after being furloughed from her job delivering meals for the city’s Office on Aging. She never heard back about whether she was approved or denied for the rent help, like a few of her friends have, she said, and hasn’t been able to afford her $1,002 rent, utility bills, and other basic needs on the few hundred dollars she receives in unemployment benefits.

“At this point, I’m at a standstill; I feel like I’m between a rock and a hard place,” Burgess said. “I don’t know how, going forward, what they’re going to do about helping me, if they helped me already, or received money on my behalf — I don’t know nothing. I’m just sitting here hoping and praying to God that I don’t get an eviction notice on my door or somebody comes knocking on my door telling me I have to leave my apartment because I’m being evicted.”

As the coronavirus pandemic drags on into its second year, millions of people like Burgess are struggling to pay their rent and bills, with many placing hope in the federal relief money being sent to state and local governments for short-term rental assistance payments. These emergency rental assistance programs, which were created and expanded with funding from the CARES Act back in March, were meant to provide desperately needed financial support to households and tenants who abruptly lost income.

The first round of rental assistance used money from a $150 billion Treasury Department stream known as the Coronavirus Relief Fund, which gave local and state governments money that could be spent on a wide range of emergency programs. An extra $25 billion was approved in December, though the Treasury included guidelines that made it more difficult for renters to access the money. Some of those guidelines have now been revised, and President Joe Biden has also called on lawmakers to pass an additional $30 billion in rental and utility assistance as part of the broader $1.9 trillion stimulus package currently being negotiated.

But many rental assistance programs have been woefully underused, in part because of bureaucratic hurdles and the realities of administering funds. Implementation of the assistance programs is up to individual states and cities, and many local governments have had trouble reaching those in need. Some jurisdictions have even had to reallocate millions intended to go toward paying people’s rent. In Arizona, rental assistance has expanded, but the state has only received about 330 applications, Fox 10 Phoenix reported.

Burgess said she’s disappointed with the government’s failure to distribute aid to many of the people who lost jobs during the pandemic. “They come on the news and say, ‘We have programs that are available, we have money and funding that’s available,’ and then you try to go out and reach out to these people to get the funding and help, and then you have to qualify, you have to meet requirements, you have to have documentation,” she said. “All types of stuff they ask you before you can even get the assistance. It’s all a process, and in the process, what do I do to make sure I have the necessities I need?”

Some rental assistance programs, in cities like Chicago, paid the grants directly to tenants who could prove they had lost their job or hours at work and found themselves unable to pay rent as a result — and were effective at doing so. But many other jurisdictions struggled to spend the millions set aside for rental assistance ahead of the initial December 30 deadline and were forced to forfeit it to other programs.

As the deadline approached in Atlanta, Mayor Keisha Lance Bottoms proposed cutting the $22 million allocated to the city’s pandemic rental assistance program in half. In Pennsylvania, roughly $108 million of the $175 million meant for rent and mortgage relief never made it to the people pleading for it and was redistributed to the state’s Department of Corrections for coronavirus-related payroll expenses instead. Demonstrators hold signs and march during an eviction protest in New York, N.Y., on Oct. 1, 2020.

As of December 2020, nearly one in every five renters nationwide were behind on rent, according to recent Census Bureau figures. The Biden administration announced in February that it would extend the foreclosure moratorium and mortgage forbearance. The federal eviction moratorium, which was extended through the end of March, and a tangle of state and local protections have been protecting tens of millions from losing their homes.

But housing advocates are worried about those falling through the cracks, saying the current moratorium and scattered relief programs aren’t strong enough to protect tenants from displacement.

“There’s never been a comprehensive set of solutions put in place to protect tenants and keep them stably housed during the pandemic,” said Diane Yentel, president and CEO of the National Low Income Housing Coalition. “There’s been a patchwork of resources and protections at the federal, state, and local level that has kept most renters stably housed but there’s been an alarming number of evictions that have proceeded despite the protections.”

Though the federal eviction ban has helped keep many tenants in their homes over the past year, Yentel noted that eviction moratoriums on their own have “never been the end solution.” These orders only postpone evictions, as the amount of unpaid rent accrues. A January report from Moody’s Analytics estimated that Americans owe about $57 billion in back rent.

One of the biggest hurdles in distributing the money so far has been landlords’ refusal to participate.

Some of the emergency rental assistance programs that struggled to distribute aid didn’t have the staff or capacity to be able to review all the applications that were coming in, while some programs were slowed down by additional layers of bureaucracy. Burdensome documentation requirements and complicated application processes — which vary place to place — are also barriers to assistance, excluding some of the households that were most in need.

But one of the biggest hurdles in distributing the money so far has been landlords’ refusal to participate. To receive the money, landlords had to agree to certain conditions and tenant protections to participate in the program, including the promise to not raise rent for a certain amount of time and to not to evict them. Some property owners outright declined, turning down payments to pay for their tenants’ rent, while others failed to respond at all.

Property owners and landlords, Burgess added, say they need to collect rent so they can continue to keep a roof over their head, but “what makes it any different from the people that live in the properties they’re renting out?”

Paul Williams, a former policy administrator with the Chicago Department of Housing, said that Chicago policymakers had already set up an emergency rental assistance program that paid out about $2 million directly into tenants’ bank accounts. When federal funds arrived, it was easy to just pump more money into their existing program.

“I think a lot of these other cities and states that were doing this, they just have inertia within their program and policy design where every time that they’ve done rental assistance, they’ve done it this way,” Williams said. “And giving money directly to tenants, people are afraid to do that for all of the reasons people are afraid of giving poor people money.”

“We heard those arguments in Chicago too. There were a couple of aldermen who were skeptical of the program because they were like, ‘What if a tenant doesn’t need 100 percent of the money for their rent and they buy a flat-screen?’” he continued. “Well, what if we give the money directly to the landlord, and they don’t use all the money on maintenance and mortgage, and they buy themselves a flat-screen?”

A tenant could still apply for rental assistance and get the money, but only after their landlord had been contacted by the city and the city confirmed that the landlord has either declined or not responded. Many of these agencies have complicated application processes and therefore have to field questions from landlords on the phone. “Cities don’t have the staff to do this properly,” Williams said. “A lot of cities are just hiring contracting firms of like 10 staff people to do all the application process.”

The Treasury Department in late February revised the guidance that Steven Mnuchin’s Treasury Department put in place on the last day of the Trump administration. The revised rules allow tenants to self-certify on most eligibility requirements and give the landlord 14 days to respond before the money is sent to the tenant. Williams said the updated rules are an improvement, but it remains to be seen whether programs in different states will be able to do direct-to-tenant well.

“Congress has already provided $25 billion, which is a really substantial, historic amount of rental assistance that will go a long way,” Yentel said. “But it’s not enough, and we need more.”