From gutting election finance rules to decriminalizing corruption, the Brazilian right wants to pass the new laws in time for the 2022 elections. 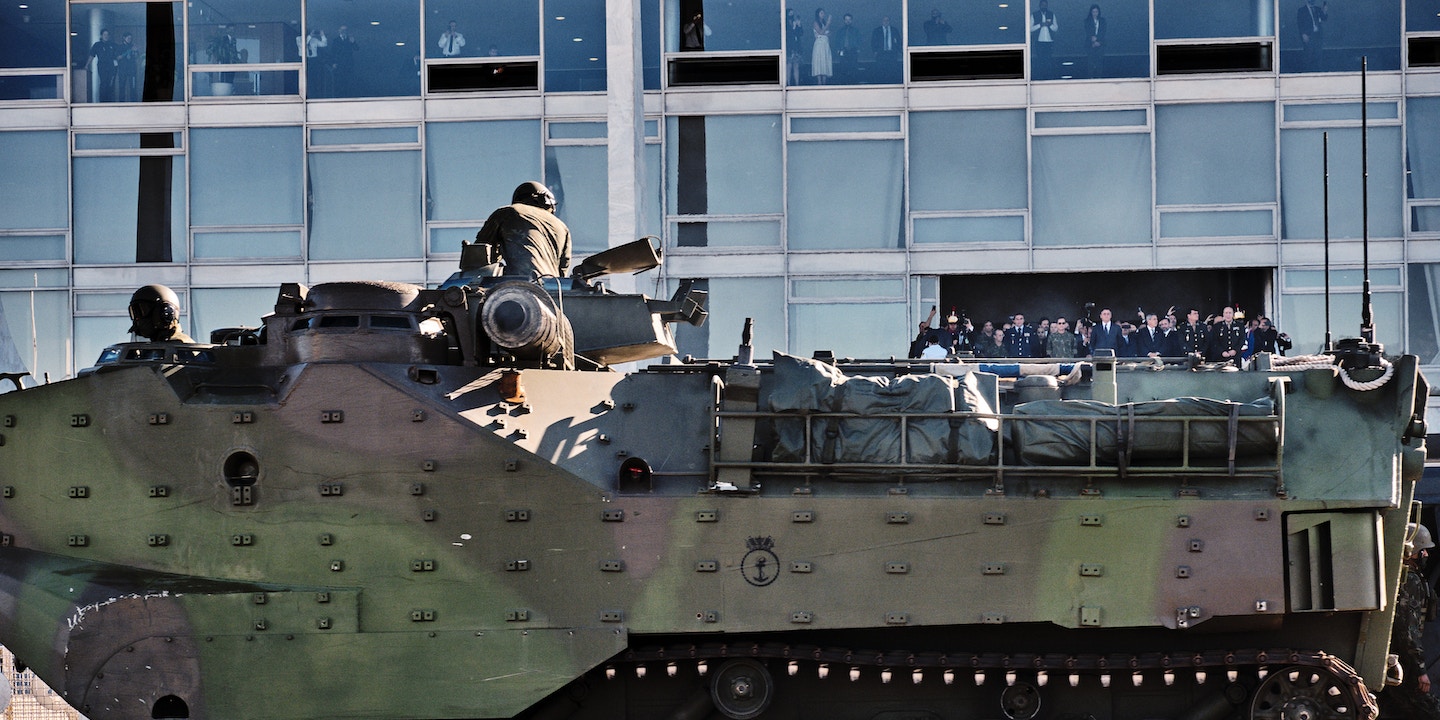 Brazil’s Congress is rushing to dramatically rewrite the nation’s election laws ahead of next year’s presidential and congressional elections.

The raft of controversial reforms being pushed by allies of far-right President Jair Bolsonaro would constitute the most sweeping revision to the country’s complicated electoral system since the 1988 Constitution was put in place.

The proposals include measures that would legalize or reduce punishment for multiple forms of corruption and voter intimidation; weaken measures designed to promote racial and gender diversity in politics; and dismantle regulatory structures.

“It will create a notion of impunity, a notion that corruption can occur.”

“It will create a notion of impunity, a notion that corruption can occur,” said Hannah Maruci, a political scientist at the Federal University of Rio de Janeiro, speaking of the potential passage of the legislative packages. “It will generate a deficit in representation, which is already low. And it will reinforce the idea that politics is a place only for certain groups.”

The three main proposals on the table — which would change how votes are cast, how they are counted, and the rules governing how campaigns are run and regulated — are being spearheaded by members of Congress who have voted in line with the Bolsonaro government at least 82 percent of the time since 2019.

Late Monday night, a proposal to change the way votes are counted for state and federal congressional elections, known as “distritão,” passed in committee, the first of many hurdles. The constitutional amendments need to pass multiple votes in both chambers of Congress and be signed into law by Bolsonaro before September to be enacted for elections next October.

The bills moved unusually quickly through committees, signaling a push to get the new laws into effect for next year’s elections. While it is uncertain if any of the proposals will pass in time, they serve as a window into the priorities of the Bolsonaro government and its allies in the Centrão, a broad coalition of political parties that serves the interests of the nation’s oligarchs. Brazilian President Jair Bolsonaro adjusts his face mask during a signing ceremony at Planalto Palace in Brasília, Brazil, on Aug. 11, 2021. Bolsonaro once again questioned the reliability of the country’s upcoming elections.

As the law currently stands, Brazilians may vote for individual candidates or political parties, with the total number of votes for the party and its candidates determining the number of seats awarded to each party. As a result, a less popular candidate from a popular party can potentially win a seat over an opponent with more individual votes.

Under the new rule, Brazil would transition over two election cycles to a system in which only the individual tallies matter, making voting a much trickier proposition, considering that voters often have hundreds of candidates from dozens of parties to choose from. In 2018, for example, São Paulo had 1,686 candidates from 35 parties running for 70 congressional seats.

Critics say this change would weaken women’s representation as well as minority candidates and parties. The shift could serve the interests of wealthy and “celebrity” candidates, as well as criminal mafias, like those linked to Bolsonaro, which can use violence to intimidate entire neighborhoods to vote for specific candidates.

Maruci, the political scientist and co-founder of A Tenda das Candidatas, a group aimed at increasing female representation in politics, said the bill favors incumbents and represents “an elitist project aimed at maintaining exclusion.”

“It’s a project that strengthens the oligarchies,” said Vânia Aieta, a law professor at Rio de Janeiro State University and practicing electoral attorney. “It’s a real danger,” she told The Intercept. “If they approve the distritão, the political sharks would all be elected, and you would eliminate all of the opposition.” 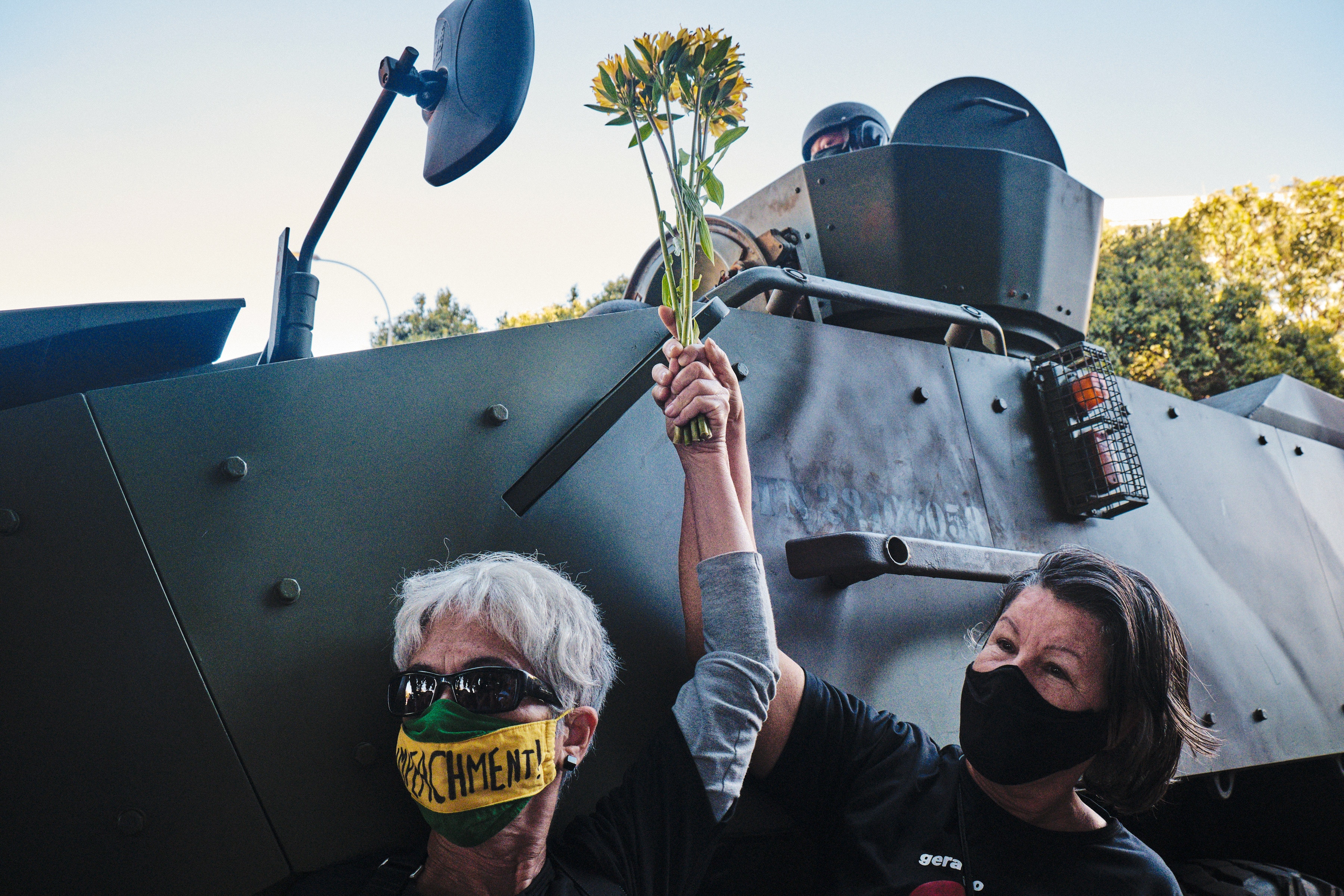 Demonstrators protest against Bolsonaro during a military parade in Brasília, Brazil, on Aug. 10, 2021.

Another proposal would fundamentally rewrite the nation’s election laws. The bill, with some 900 articles, would make some major changes, including a dramatic reduction in the role and the authority of the electoral justice system to regulate, investigate, and penalize political candidates and parties.

It would also grant parties more autonomy over how they spend funds and dramatically cut back reporting requirements. Illegal campaign financing and other campaign violations, which can currently result in a winning candidate having to forfeit their position, would be punishable, at most, by relatively small fines, except in cases involving violence.

While parties are legally required to distribute public campaign funds proportionally to candidates of all genders and races, the new bill creates a loophole: Women would be allowed to use their electoral funds on behalf of other candidates.

And decisions by the Superior Electoral Court would have to be issued more than a year before an election to take effect — and Congress, for the first time, would be permitted to invalidate these rulings.

The wide-ranging proposal would also “decriminalize” Election Day activities to sway votes and “hinder democratic control over the emergence of extremist, authoritarian or human rights violating groups,” according to Freio na Reforma, a coalition of dozens of predominantly centrist civil society and political organizations opposed to the bill.

Rep. Margarete Coelho, the main author of the bill and a leader of the Centrão-affiliated Progressistas party, provided a written statement that disagreed with many of the consensus characterizations by critics. In May, she told Brazilian news outlet Jota that the current electoral system is too “noisy” and requires a “simplification” to “reduce judicialization.”

Aieta, the law professor, who was consulted on the bill, said there are some improvements that would reduce “judicial warfare” in the electoral courts by losing candidates and end some rules that she believes to be overly onerous or outdated. However, she emphasized that the relaxed finance and reporting requirements for parties are “absurd.” She said, “Evidently, there was strong lobbying by the political parties, their leaders.”

The larger goal, according to Aieta, is for elected members of Congress of all political persuasions to rewrite the rules in a way that keeps themselves in power: “The number of representatives committed to the status quo is infinitely greater than those who are committed to change.” She noted that even some left-leaning representatives were joining the Centrão’s efforts to shore up their positions. Bolsonaro waves during a military parade outside Planalto Palace in Brasília, Brazil, on Aug. 10, 2021.

In Brazil’s national political conversation, debate over these consequential proposals has been largely sidelined. Instead, the focus has mostly been on Bolsonaro’s push to move from an exclusively digital voting system to one that produces paper ballot receipts that can be used to audit the digital record. The president and his allies dramatically ramped up messaging on the issue after the April launch of a Senate inquiry into his catastrophic handling of the Covid-19 pandemic.

Bolsonaro began casting doubt on the integrity of the country’s electoral system soon after his 2018 victory, an apparent pretext to halt or contest the 2022 elections and remain in power. He has made claims of electoral fraud without producing evidence, a strategy that clearly echoes former U.S. President Donald Trump’s refusal to accept defeat.

“If there are no printed ballots, it is a sign that there will be no election,” said Bolsonaro in a live address broadcast on his Facebook page in May. He has doubled down on the threat, telling an audience of supporters in July that “either we have clean elections in Brazil or we don’t have elections.” Last month, the conservative Estadão newspaper reported that influential military figures allied with Bolsonaro have made similar statements.

The paper ballot proposal was voted down in committee last week, but the Bolsonaro-aligned leader of the lower house nonetheless put it to a full floor vote on Tuesday, in an apparent attempt to lay the issue to rest. The vote failed, as even Bolsonaro expected.

After the speaker refused to delay the vote in order to give Bolsonaro more time to whip up support, the navy announced a military parade in Brasília on Tuesday, the day of the vote. Forty vehicles, including tanks, participated in the show of force, which was attended by Bolsonaro, top ministers, the heads of the armed forces, and influential allies of the president.

The display was widely condemned by opponents. Sen. Omar Aziz, who is leading the Senate inquiry into Bolsonaro’s handling of the pandemic, opened the day’s session with a rebuke: “Every public figure, in addition to fulfilling his constitutional functions, should fear ridicule. But Bolsonaro doesn’t care for any of these limits, as is clear in today’s pathetic scene, which only shows the threat of a weakling who knows he has lost.”

Brazil has suffered nine coup d’états over the last two centuries, including the U.S.-backed 1964 military coup that led to a brutal 20-year military dictatorship. Only one military member has ever been held responsible for human rights violations during the period.