Brazil’s largest-ever Indigenous protest came amid efforts by Jair Bolsonaro and his allies to pave the way for industry in the Amazon. 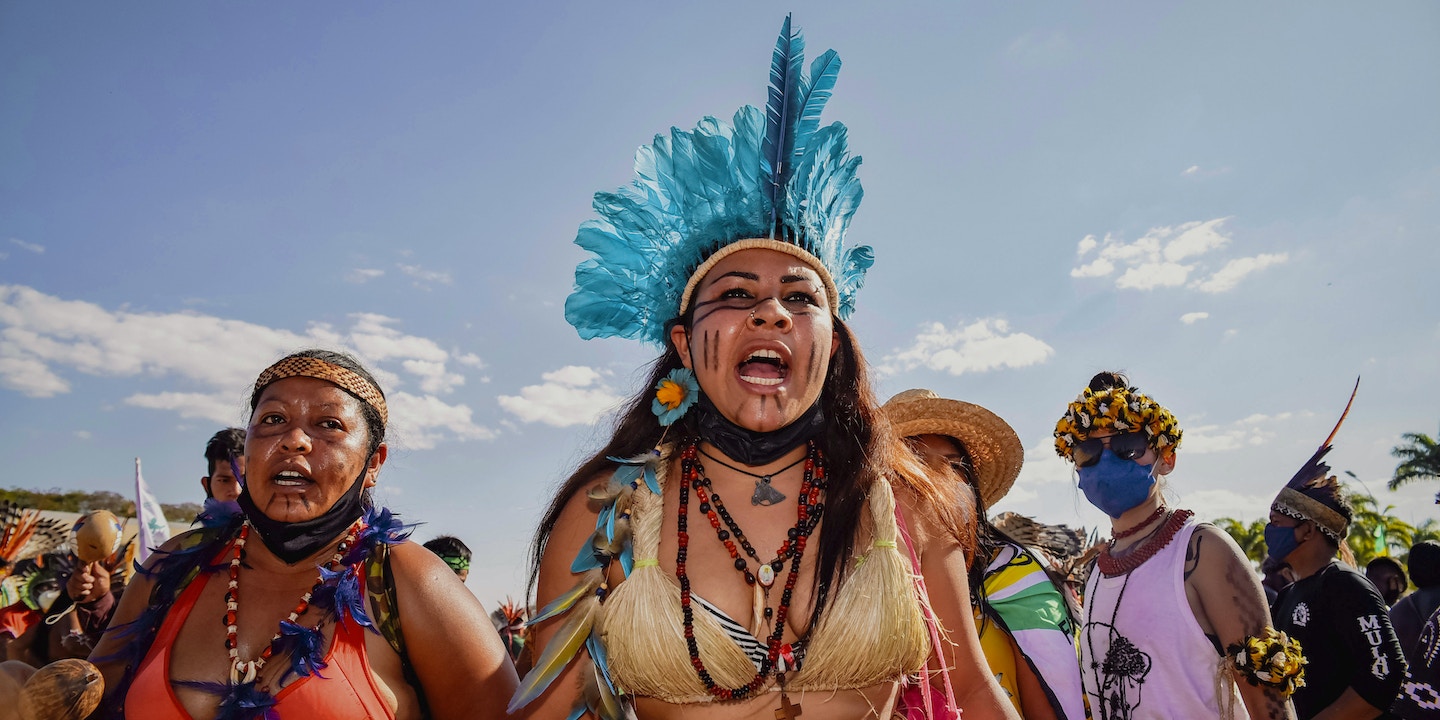 Indigenous communities in Brazil organized the largest-ever native protests to block what they described as “a declaration of extermination” from lawmakers representing agribusiness, mining, and logging interests aligned with far-right President Jair Bolsonaro.

The umbrella group Articulation of Indigenous Peoples of Brazil, or APIB, put together the protests as part of the weeklong “Struggle for Life” protest in the capital, Brasília, in anticipation of a decision from the Supreme Court that could invalidate Indigenous land claims.

“Our struggle takes as its target all governments that are complicit in Bolsonaro’s campaign of genocide, all corporations that seek to profit from it,” APIB said in a joint statement with Progressive International, a left-wing coalition that sent a delegation to survey the situation. “The fight against Bolsonaro extends far beyond the borders of Brazil.”

“We are the ones suffering. The government doesn’t suffer. So that’s why we’re here to fight.”

APIB expected the Supreme Court would strike down a challenge to Indigenous land claims during its protest, but the court postponed the judgment to next week after one vote was cast in favor of Indigenous rights. One right-wing lawmaker, whose fortune comes from agriculture, said he and his colleagues lobbied the justices to further delay the ruling so that Congress has time to pass measures that would strip Indigenous land rights through legislation instead of the courts.

Since 2019, Bolsonaro has used his executive authority to aggressively attack Indigenous rights, slash environmental protections, and cripple relevant law enforcement efforts — moves that have drawn international condemnation. Closely aligned with the powerful agribusiness lobby, the government has also pushed forward a slew of consequential bills in Congress that, if passed, would be a death sentence for many of Brazil’s Indigenous communities and, critics warn, the entire Amazon rainforest.

“We are the ones suffering. The government doesn’t suffer,” said Pasyma Panará, president of the Iakiô Association in the Xingu region of the Amazon. “So that’s why we’re here to fight.”

The delegation from Progressive International included a member of the Spanish parliament, Indigenous leaders, labor activists, and two U.S. congressional staffers who were participating in a personal capacity. The group traveled to Brasília and the Amazonian cities of Belém and Santarém for a week of meetings with Brazilian politicians and environmentalists and groups representing Indigenous communities, labor, and landless peasants.

“This delegation aims to bring the eyes of the world to Brazil,” David Adler, general coordinator of Progressive International, told The Intercept. “We are here to develop a common strategy to confront the crises that are facing Brazil.” Indigenous Brazilians protest against President Jair Bolsonaro, holding a sign which reads, “Bolsonaro, get out,” at the Struggle For Life encampment in Brasília, Brazil, on Aug. 26, 2021. Protestors hold a banner that reads “Our history doesn’t begin in 1988”, the year the Constitution was signed into law, “we have resisted for more than 12,000 years.”

More than 6,000 representatives of 176 Indigenous groups pitched tents and lashed together bamboo shelters for seven days of protest and cultural exchange. The encampment sat on a dusty patch of land in the capital, less than a mile up the main promenade from Congress, the Supreme Court, and the presidential palace.

To participate, delegates from the most far-flung corners of Brazil’s massive expanses spent as many as three days on packed buses that navigated washed-out dirt roads, traveling under the threat of ambushes from paramilitary gangs.

Before rousing speeches by movement leaders and allies could begin on the main stage, groups of Xikrin, Munduruku, Xukuru, and others dressed in full ceremonial regalia and performed traditional dances and songs for the crowd. Tech-savvy Indigenous influencers and journalists livestreamed the proceedings on social media, engulfed in plumes of red dust.

“We know what evil is. Evil is the agribusiness invading our territories.”

“We know what evil is,” said one speaker to applause. “Evil is the agribusiness invading our territories.”

Brazil’s Indigenous people have no shortage of reasons to protest. Their ancestral lands are increasingly threatened by major agricultural infrastructure projects and violent land thieves aided by government agencies. Violent attacks are on the rise and environmental degradation is making traditional ways of life less tenable.

Meanwhile, Congress has been voting on one bill after another that would undo the hard-fought protections written into the 1988 constitution. Under Bolsonaro, everything has gone from bad to worse.

For weeks, organizers have been primarily focused on the Supreme Court decision that could substantially reduce constitutionally protected Indigenous territories. “It is one of the most important judgments in history,” said APIB leader Sônia Guajajara, in a livestreamed event last Thursday. “The struggle of Indigenous peoples is a struggle for the future of humanity.”

The measure, known as the “Milestone Thesis,” or “Marco Temporal” in Portuguese, would invalidate the land claims of Indigenous groups that did not physically occupy the territory on the day the new constitution was signed in 1988, ignoring centuries of genocidal oppression that forced many tribes to flee their ancestral homes.

Indigenous land rights are enshrined in Brazil’s Constitution, but the government has moved at a snail’s pace over the last three decades to process claims. Meanwhile, Brazil’s agribusiness, mining, and lumber industries, with their international backers, have their eyes on many of the vast tracts of land, mostly located in the Amazon, that are claimed by natives. The business interests have been chipping away at the protections by any means necessary in the courts, in Congress, and on the ground.

Illegal invasions into Indigenous lands by violent, heavily armed groups have been on the rise in recent years. Criminal groups have been emboldened by Bolsonaro, who campaigned on the promise that, if elected president, “there won’t be a centimeter demarcated for Indigenous reserves” and has made racist, genocidal comments about Indigenous peoples throughout his career.

“The Marco Temporal represents for us, Indigenous peoples, a declaration of extermination,” said Eloy Terena, a lawyer and Indigenous rights activist, during an event last Thursday. Terena pointed out that many of Brazil’s 114 uncontacted tribes, which rely on government protection, live in territories that could be threatened if the Marco Temporal legal thesis is upheld.

The only way to put the brakes on the tractors that are plowing through the Amazon, Rep. Joênia Wapichana told The Intercept, is a “political renewal.” Indigenous people and their allies must “attain the majority within Congress,” she said, something that has never happened. “Maybe that way they might think twice before putting forward a proposal to reduce Indigenous rights.”

Wapichana, 47, is Brazil’s first female Indigenous lawyer and member of Congress. She is currently the country’s sole Indigenous representative. At the “Struggle for Life” protest, she got the rockstar treatment: Wherever she went, adoring fans lined up to snag selfies.

In a meeting with a dozen leaders from some of Brazil’s hardest-hit Indigenous communities, a Progressive International delegate asked which politicians they considered solid allies. The group hesitated to respond, whispering among themselves until one of them spoke up: “Rep. Joênia has fought alongside us a lot,” one Indigenous leader said, going on to name a handful of nongovernmental organizations. None of them were from Wapichana’s state of Roraima. Any other names? This time the answer was quick: “No, not that I remember.”

“Agribusiness not only buys advertising, it also buys the editorial line and influences news coverage.”

The Mixed Parliamentary Front in Defense of the Rights of Indigenous Peoples, launched in 2019 by Wapichana, is comprised of 237 of Brazil’s 594 members of Congress. But during the first four days of the protest, only two federal elected representatives stepped foot on the protest’s main stage and only a handful visited the encampment. No major presidential hopefuls or prominent government officials attended.

In a change from recent Indigenous protests — which ended in violent repression — police kept their distance. Coverage from major national news outlets has also been hard to come by. On Wednesday, APIB’s executive coordinator Dinamam Tuxá lamented to The Intercept that none of the three main newspapers in Brazil — which rely on agribusiness advertising — had yet run a cover story on the historic protest. “Agribusiness not only buys advertising,” he said, “it also buys the editorial line and influences news coverage.” Indigenous Brazilians sing while protesting outside of the Supreme Court in Brasília, Brazil, on Aug. 26, 2021, as they await an important ruling from the court. They are among 6,000 people who came to the capital in opposition to measures that would dramatically roll back Indigenous territorial rights.

Even if the Marco Temporal is defeated in the Supreme Court, dozens of other proposals and government actions threaten Indigenous lands and serve to push the Amazon rainforest closer to a deforestation “tipping point.” The result would be an irrevocable collapse of the ecosystem.

Leading scientists believe that the tipping point will come at 20 to 25 percent deforestation, causing the lush Amazon to dry up and turn into a savanna, provoking catastrophic carbon emissions and severe droughts throughout the continent. Eighteen percent of the Amazon has already been cut down and the rate of destruction has only increased under Bolsonaro.

“Our lives are at risk and we are asking for help,” Auricélia Arapium, a native leader from the Tapajós region, told the Progressive International delegation during a meeting at the encampment on Monday. “We no longer have anyone to turn to in Brazil. That’s why we have approached international organizations, so that our rights, which are being threatened, are preserved.”

In a press conference later that day, Progressive International announced that it plans to work with partners around the globe to launch a boycott of foreign companies responsible for the destruction of the Amazon and the trampling of Indigenous rights. The investment giant Blackstone and the private agricultural conglomerate Cargill are at the top of their list.

“We need to look at the corporations that are fueling this and the U.S. and international foreign policy that’s enabling these corporations,” said Nick Estes, a professor at the University of New Mexico, a Progressive International delegate, and a citizen of the Lower Brule Sioux Tribe.

“The practices of these corporations like Cargill are fundamentally racist,” said Estes, who has contributed to The Intercept. “If more people understood how much Indigenous blood, how much Black blood, how much blood from Brazilians living on the land is spilt just for them to have a cheeseburger, I think there would be much more outrage.”