Sarah Everard’s Killer Got a Life Sentence, but the System That Enabled Him Remains

Even after Wayne Couzens’s crime, U.K. Parliament is considering a bill to give police greater authority to arrest people. 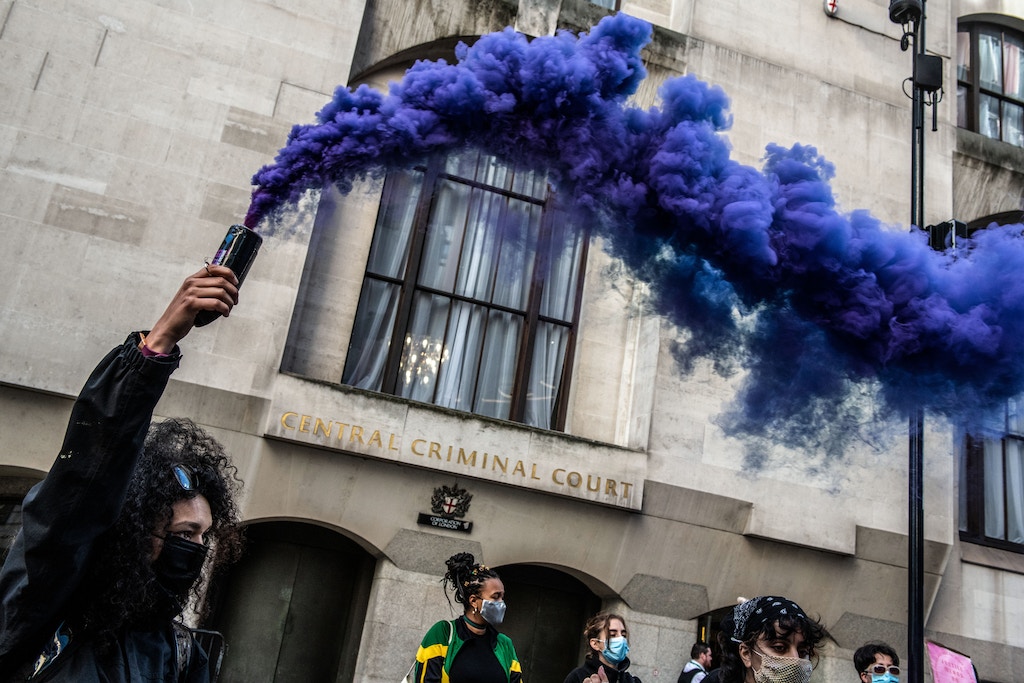 Feminist group Sisters Uncut protest outside the Central Criminal Court as the sentencing hearing for Wayne Couzens takes place in London on Sept. 29, 2021.

On the evening of March 3, Metropolitan Police officer Wayne Couzens approached a young woman walking home alone on a south London street. We can’t know exactly what Couzens said to 33-year-old Sarah Everard; she didn’t survive her encounter with the cop. We do know, from closed-circuit TV footage, that Couzens showed her his police warrant card and handcuffed her. He is believed to have used Covid-19 lockdown enforcement as grounds for her detainment — he had worked lockdown patrols and knew that those restrictions would provide him some cover. Everard did not resist. No witnesses, and there were witnesses, intervened. It was, after all, an arrest.

This is how Couzens, 48, used the unchallenged authority accorded to him as a police officer to kidnap Everard, drive her away, rape, torture, and murder her. Everard’s death sparked a major — and all too vague — national conversation about “women’s safety,” in which the danger posed by police remained largely a footnote, even though the perpetrator was identified as a police officer, arrested, and charged. Cops once again used pandemic lockdown rules to manhandle and assault attendees at Everard’s public vigil later that month.

Abhorrent details revealed this week in court have made undeniable just how central Couzens’s role as a police officer was in enabling him to carry out his putrid designs. On Thursday, Couzens was sentenced by a judge to serve life in prison without the chance of parole — a “whole-life” order, as it’s known in the U.K. There are nearly 80,000 people incarcerated in prisons in England and Wales; only 60 of them are whole-life prisoners.

There have been predictable efforts by the Metropolitan Police and the British government to cast Couzens, 48, as the most rotten of bad apples, and the specific horror of his well-planned brutality should indeed not be underplayed. Yet Everard’s kidnap, rape, and murder stand as extreme conclusions, rather than aberrations, of the violence inherent to the unquestioned authority accorded to the institution of policing. At least 15 women in the U.K. have been killed by serving or former police officers since 2009, and on average one woman a week comes forward to report a serving police officer for domestic or sexual violence.

“Sarah was no criminal, yet Couzens was able to stalk, handcuff and abduct her, in public, without arousing any suspicion,” wrote Sisters Uncut, a U.K.-based direct action feminist group that advocates for survivors of domestic violence and is launching trainings on how to intervene in police stop-and-searches. “Sarah’s case, whilst horrifying, is not singular.”

In 2019, a “super-complaint” was filed against over a dozen British police forces, citing 700 alleged cases of domestic abuse perpetrated by police officers, who faced scant consequences. Couzens himself had accusations of sexual offenses dating back to 2015, and some of his police colleagues gave him the nickname “The Rapist.” When handing down his sentence, the judge expressed particular dismay at the fact that Couzens had used his position as a police officer to carry out the premeditated crimes.

“The misuse of a police officer’s role such as occurred in this case in order to kidnap, rape, and murder a lone victim is of equal seriousness as a murder for the purpose of advancing a political, religious, or ideological cause,” Lord Justice Adrian Fulford told the court.

His comparison was apt, if unwittingly so. In using his position as a police officer to kidnap, rape, and kill, Couzens was advancing the precise ideologies of power, patriarchal violence, and denial of liberty that have always undergirded the institution of policing. The first U.K. national police forces were established in the early 19th century to suppress anti-colonial uprisings in Ireland. As in the United States, the history of U.K. policing is one of intolerable white supremacist and patriarchal oppression.

Despite the significant danger of endowing law enforcement officers with unchecked powers, as Couzens grimly proved, the British government is attempting to give the police even greater authority to stop, detain, and arrest individuals, including for the alleged crimes of being “noisy and disruptive.” The Police, Crime, Sentencing and Courts Bill, which the government is attempting to force through Parliament, constitutes a direct assault on freedom of expression and protest in the U.K. It’s no less than chilling that the government, with the support of the opposition Labour Party leadership, is attempting to use the fact of Everard’s death, and appeals to “women’s safety,” to endow the police with more power.

A number of Labour Party politicians have called for the current commissioner of the Metropolitan Police, Cressida Dick, to step down in light of Couzens’s case. “Women’s confidence in police will have been shattered,” Labour Member of Parliament Harriet Harman wrote in a statement calling for the commissioner’s resignation. “Women need to be able to trust the police, not fear them,” she added, before proposing a number of police reforms relating to background checks, screenings, and suspensions and dismissals when it comes to enacting and enabling violence against women. They are the sort of necessary but profoundly insufficient policies that have again and again failed to reform an essentially unreformable institution.

Proposals like Harman’s might recognize the fact that the police force as a whole bears some responsibility for Everard’s murder, in permitting a man like Couzens to “slip through the net,” as Labour leader Keir Starmer put it. We must reject such a framing. Couzens did not slip through the police’s net; the nature of his violence runs through its very fibers.