Documents released by the NIH contradict previous assertions by EcoHealth Alliance about its experiments on bat coronaviruses in Wuhan. 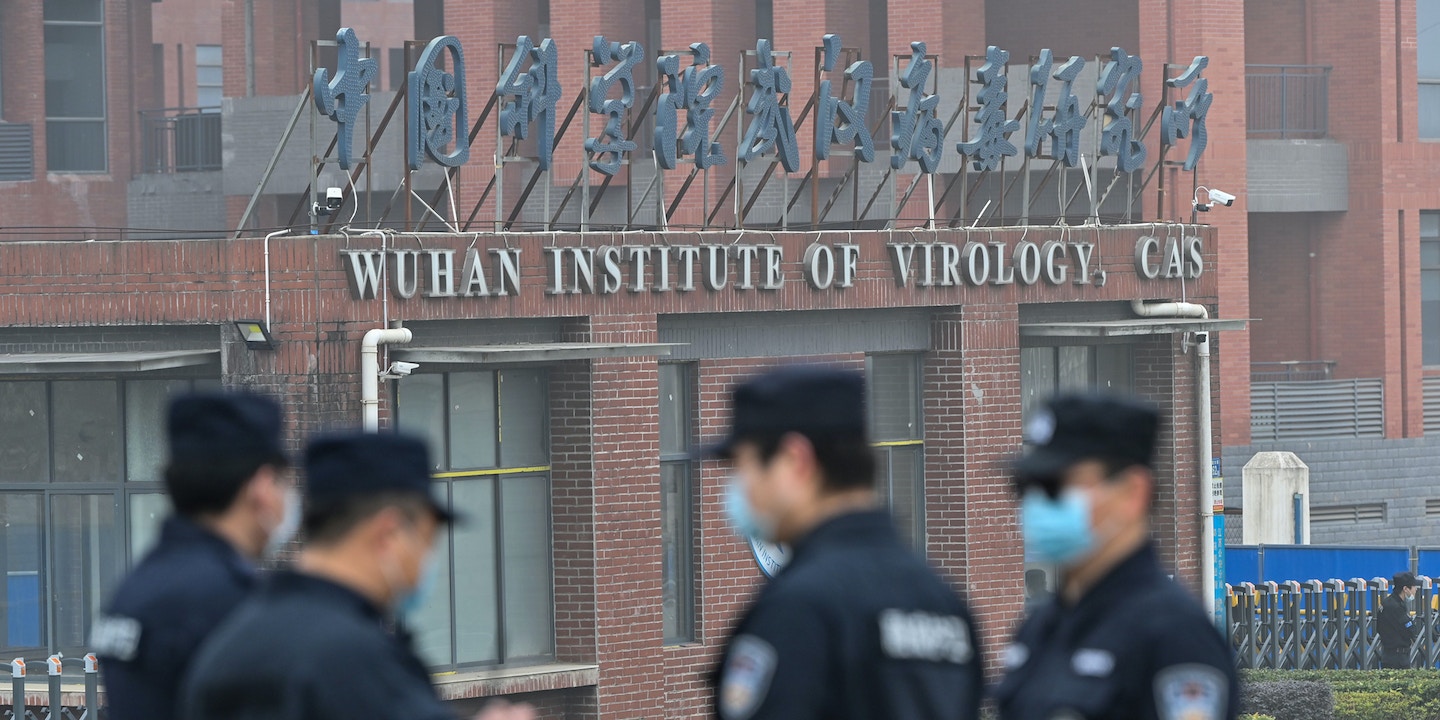 Documents released by the National Institutes of Health yesterday raise new questions about government-funded research on viruses conducted in China. The annual grant reports from EcoHealth Alliance, which the NIH sent to The Intercept in response to a lawsuit, provided additional evidence that the U.S. nonprofit — which studies emerging infectious diseases — and its sub-awardee, the Wuhan Institute of Virology, were engaged in risky experiments and that the NIH may not have been fully aware of these activities.

In September, The Intercept received two grant proposals by EcoHealth Alliance that were submitted to the NIH. One of the proposals, “Understanding the Risk of Bat Coronavirus Emergence,” detailed troubling and potentially dangerous research conducted with bat coronaviruses in Wuhan, China. But the first release of the documents, which The Intercept received more than a year after it requested them, did not include the progress report for the grant’s fifth and final funding year.

Yesterday, the NIH provided that missing report for the period ending May 2019, which was inexplicably dated August 2021. That summary of the group’s work includes a description of an experiment the EcoHealth Alliance conducted involving infectious clones of MERS-CoV, the virus that caused a deadly outbreak of Middle East respiratory syndrome in 2012. MERS has a case-fatality rate as high as 35 percent, much higher than Covid-19’s. The scientists swapped out the virus’s receptor-binding domain, or RBD, a part of the spike protein that enables it to enter a host’s cells, according to the report. “We constructed the full-length infectious clone of MERS-CoV, and replaced the RBD of MERS-CoV with the RBDs of various strains of HKU4-related coronaviruses previously identified in bats from different provinces in southern China,” the scientists wrote.

“Changing the receptor binding site on MERS is sort of crazy,” wrote Jack Nunberg, a virologist and director of the Montana Biotechnology Center at the University of Montana, in an email to The Intercept after reviewing the documents. “Although these new chimeric viruses may retain properties of the MERS-CoV genetic backbone, engineering of a known human pathogen raises new and unpredictable risks beyond those posed by their previously reported studies using a non-pathogenic bat virus backbone.” The researchers’ intent, which some scientists consider integral to defining gain-of-function, remains unclear.

“In the very same report, they showed data that one of their chimeric SARS-like viruses caused more severe disease in a humanized animal model than the original virus,” said Alina Chan, a Boston-based molecular biologist and co-author of the upcoming book “Viral: The Search for the Origin of Covid-19.” “After seeing that result, why did they do similar work using the MERS human pathogen?”

The Intercept previously asked EcoHealth Alliance about work on MERS-CoV referenced in sections of the grant that NIH released in September. At the time, EcoHealth spokesperson Robert Kessler insisted that the group had not conducted the work. “The MERS work proposed in the grant is suggested as an alternative and was not undertaken,” Kessler wrote in an email in September. Kessler did not respond to a query The Intercept sent yesterday about the apparent falsity of his previous statement.

The work with the MERS virus complicates EcoHealth Alliance’s previous claims that the research covered in the grant had not involved work with “potential pandemic pathogens,” or viruses, bacteria, and microorganisms that carry a likely risk of uncontrollable spread between humans. Kessler had previously told The Intercept that “All the other viruses studied under this grant are bat viruses, not human viruses.” But MERS is known to infect and spread in humans, and was specifically designated under the NIH’s former pause on funding gain-of-function research of concern.

Other questions arise from the group’s experiments with bat coronaviruses. As The Intercept previously reported, the EcoHealth Alliance grant proposals released in September contained descriptions of an experiment on mice that had been genetically engineered to contain an enzyme receptor found in human cells. These “humanized mice” were infected with bat coronaviruses containing parts of other viruses. At certain times during the experiment, the mutant viruses reproduced far more quickly in the mice than the original bat virus on which they were based and were also somewhat more pathogenic, leading several experts to conclude that they fit the NIH’s definition of gain-of-function research.

The federal government temporarily paused such gain-of-function research involving potential pandemic pathogens in 2014, though it was resumed in 2017, when the Department of Health and Human Services introduced guidelines known as P3CO, which were meant to safeguard against the risk of disease outbreak.

In September, The Intercept asked the NIH whether anyone at the agency was aware of the humanized mouse experiments and whether, after they resulted in evidence of enhanced virus growth greater than 1 log over the parental backbone strain, the grantees were made to “stop all experiments with these viruses and provide the NIAID Program Officer and Grants Management Specialist, and Wuhan Institute of Virology Institutional Biosafety Committee with the relevant data and information related to these unanticipated outcomes,” as the grant had specifically required. We also asked why that research was not subject to either the temporary pause or the P3CO guidelines.

In response, NIH spokesperson Elizabeth Deatrick wrote, “The PI [principal investigator] reported these results in the year 4 progress report and grant renewal application. The research described was reviewed, and was determined not subject to the 2014-2017 Gain-of-Function Research Funding Pause or to the P3CO Framework.”

Yet in a letter sent to Rep. James Comer, R-Ky., yesterday, NIH Principal Deputy Director Lawrence Tabak seemed to suggest that the agency had not been aware of the problematic research. “EcoHealth failed to report this finding right away, as was required by the terms of the grant,” Tabak wrote to Comer, the ranking member of the House Committee on Oversight and Reform, which also received a copy of the annual progress report from the bat coronavirus grant yesterday.

While critical of EcoHealth Alliance, Tabak also seemed to suggest that there was nothing alarming about the research, which he referred to as “limited experiments.” After acknowledging that some of the humanized mice that were infected with the mutant viruses became sicker than those infected with the original viruses, he said the scientists had not been intent on that outcome. “As sometimes occurs in science, this was an unexpected result of the research, rather than something the researchers set out to do.”

Tabak also emphasized, as The Intercept has previously reported, that the viruses studied in the mouse experiments were so evolutionarily distant from SARS-CoV-2 that they could not have mutated into the virus that caused the Covid-19 pandemic. That view was echoed in a brief analysis of the research that NIH posted to its website yesterday.

Also among the documents NIH released to The Intercept yesterday was the original version of an annual report from the fourth year of the bat coronavirus grant. The version released to The Intercept in September indicated that it had been submitted in 2020, after the pandemic began and more than two years after it was due. The two versions appear to be almost identical, though they include different reference publications. NIH has not yet released communications around the grant that may explain why the document was updated.

According to Tabak’s letter, the NIH has demanded additional information from EcoHealth Alliance. “EcoHealth is being notified that they have five days from today to submit to NIH any and all unpublished data from the experiments and work conducted under this award,” he wrote. “Additional compliance efforts continue.”

“This is a pattern of dishonesty,” said Chan, the molecular biologist and “Viral” author. “It should be clear now that we cannot take the word of conflicted parties in the search for the origin of Covid-19,” she added. “It is urgently important that the public and investigators gain full access to all EcoHealth documents relating to research conducted in Wuhan.”

This story has been updated to clarify a statement by Jack Nunberg and include an additional comment from Alina Chan.