How Climate Activists Pushed the “Left Edge of the Possible”

The strongest climate provisions may have failed, but the past 10 years have proved that organizing can work. 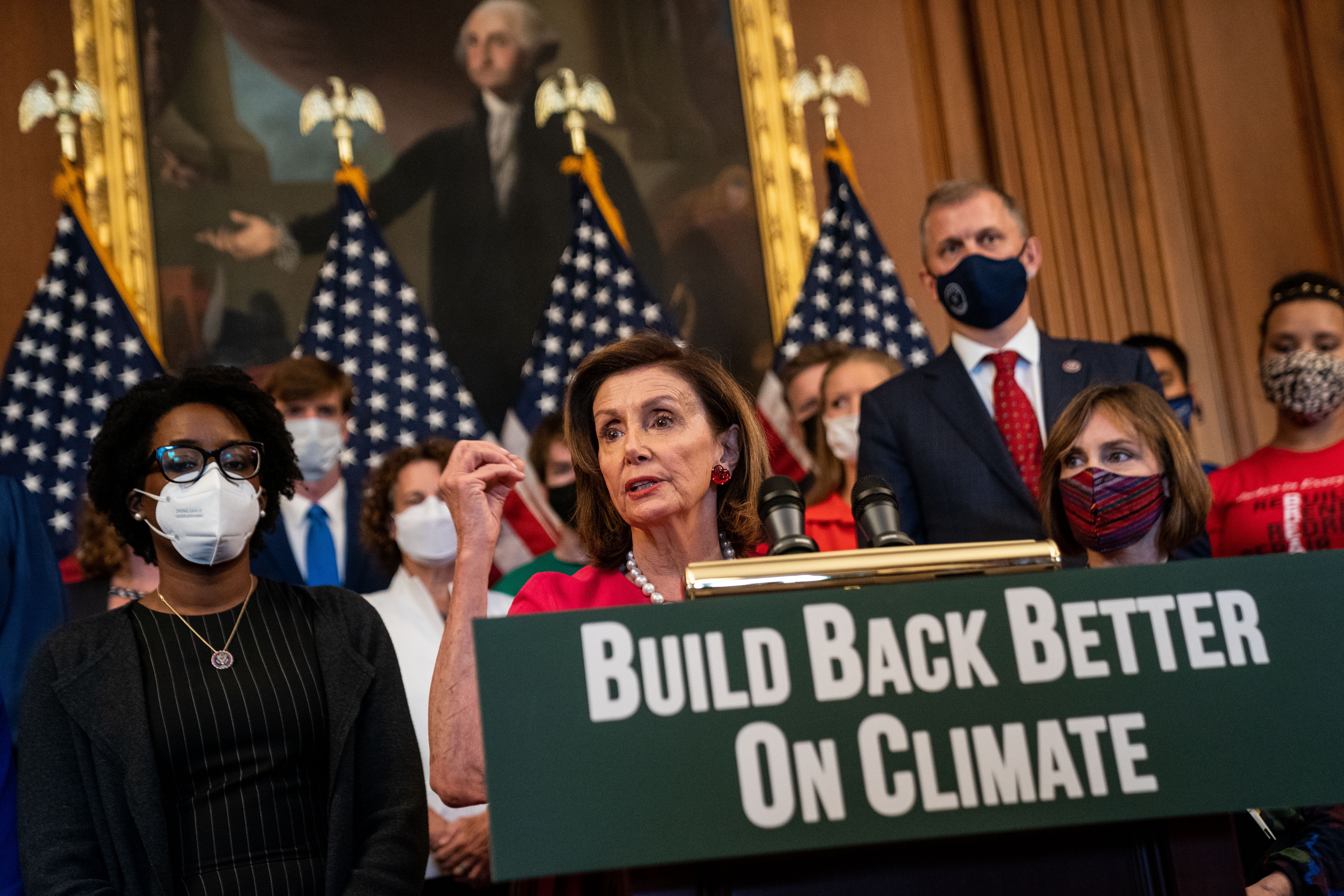 Speaker of the House Nancy Pelosi, D-Calif., speaks during an event with House Democrats and climate activists to highlight the aspects of the Build Back Better Act that focus on combating climate change, at the Capitol in Washington, D.C., on Sept. 28, 2021.

For a moment, it almost felt like climate activists had won.

Last month, before jetting off to the 26th United Nations Climate Change Conference in Glasgow, Scotland, President Joe Biden released a new framework for the hotly debated Build Back Better Act. Sen. Joe Manchin, D-W.V., had spent weeks picking off some of the most popular and transformative policies in the Democrats’ legislation, cutting a proposed $3.5 trillion investment in a more humane social safety net and stable climate roughly in half in the process. Paid family leave, a clean energy performance standard for utilities, and Medicare expansion were among the many policies axed by the senator. On the other hand, in the new White House outline, which was crafted to court Manchin’s and Arizona Democratic Sen. Kyrsten Sinema’s votes, the total proposed spending to address climate change had survived largely unscathed, shrinking modestly from about $600 billion to $555 billion.

With a deal seemingly at hand, on November 1, Rep. Pramila Jayapal, D-Wash., chair of the Congressional Progressive Caucus, said in an interview that her left-leaning faction in the lower chamber was “taking the president’s word at the fact that he believes he can get 50 votes in the Senate.” House progressives would give their support to the bipartisan Infrastructure Investment and Jobs Act with faith that Manchin and Sinema would in turn give theirs to Build Back Better.

Some of my green comrades were ready to take a victory lap. “Climate activists successfully built enough power within the party that Democrats defended climate spending *above all else* in the bill,” tweeted influential climate writer David Roberts. “I promise, it won’t hurt them at all if they take maybe just a brief second to celebrate this progress & pat themselves on the back.” Like the good little lefty climate influencer I am, I smashed that retweet.

But as it turned out, Biden did not have the votes. At a hastily organized press conference, also on November 1, Manchin gave sweeping yet vague remarks about the potential for new legislation to balloon the national deficit and juice inflation, widening the gulf between him and other Democrats while offering little of substance that might bridge it. “I’m open to supporting a final bill that helps move our country forward,” the senator said, “but I’m equally open to voting against a bill that hurts our country.”

A deal has yet to be reached, and everything is still on the table. But for a moment, the mirage of victory revealed something noteworthy, perhaps even remarkable, that has largely been overshadowed by headlines about Manchin’s recalcitrance: Advocates, activists, and wonks succeeded at getting all but one or two Democratic senators on board with much of their agenda.

And by this measure, the Build Back Better Act would be considered a success story in almost any other realm: 48 or 49 senators came around to the climate legislation equivalent of a Hail Mary pass. This new consensus is no small achievement. The last time that Congress tried to do something big for the climate, legislation was all but dead on arrival.

In 2009, Congress began negotiating the details of Waxman-Markey, legislation to put a cap on emissions that would be reduced over time and enforced through a market for tradable emissions credits. The idea, popular among economists and tolerated by some corporations, was modeled after a similar cap-and-trade system that proved to be a cost-effective strategy to reduce acid rain.

Given its market-friendly structure, cap and trade had actually been endorsed by both parties’ presidential candidates in the 2008 election. A coalition between big business and green groups, called the U.S. Climate Action Partnership, or USCAP, had started hammering out a legislative blueprint before President Barack Obama was sworn into office.

And in the early months of the Obama administration, things were looking good for the cap and traders. While health care reform hit an early roadblock, environmentalists would secure the confirmation of Obama appointees who were champions of their emissions trading approach in short order. And while the president himself largely stayed above the fray in both the climate and health care fights — a purposeful decision made by advisers keen to distance the chief executive from the unpopular backroom dealmaking common in Congress — Obama was willing to knock congressional heads together when needed.

“Cap and trade seemed like a plane gathering speed down the runway, about to take off.”

“Cap and trade seemed like a plane gathering speed down the runway, about to take off,” observed Harvard University political scientist Theda Skocpol.

But then, in the summer of 2009, the cap and traders ran into this much more powerful and organized thing called the tea party, which was packing normally sleepy town halls to berate Democratic members of Congress into submission. This spelled disaster for USCAP. The coalition had been an insider’s game, a strategy carefully crafted by wonks, lobbyists, and environmentalists that relied on businesses to provide cover for moderate Republicans to vote for cap and trade.

But when Sen. John McCain faced a primary challenge from a right-wing radio talk show host eager to ride the tea party wave in 2010, he, and every other friendly Senate Republican, caved. The “maverick” had once been considered key to USCAP’s bipartisan strategy, but ultimately, his party used the power of the filibuster to kill Waxman-Markey. The House of Representatives passed Waxman-Markey in a vote similar to the current makeup of the lower chamber: 219-212. And that’s where things ended. The bill never even made it to the Senate floor for a vote. A demonstrator with the People’s Climate Movement stands with a sign reading “Water is Life” in Washington, D.C., on April 29, 2017.

For the better part of the next decade, climate advocates wandered the wilderness, looking for answers. Why had Democrats succeeded at passing the Affordable Care Act but failed at passing Waxman-Markey? The most influential response came in the form of a 2013 postmortem written by Skocpol. The Harvard scholar devoted more than 140 pages to this question, but her answer can more or less be summarized in a single word: organizing.

In 2009, the health care fight was organized very differently from the fight over climate, Skocpol wrote. While climate change legislation was pushed by “moderate, highly professionalized environmental organizations” like USCAP that “broker stakeholder partnerships,” she wrote, in “health-reform politics, new funding and capacity-building went into various umbrellas for consumer advocates and, most importantly, into a slightly left-of-center effort called ‘Health Care for America Now’ (HCAN) that would orchestrate organizational networks in dozens of states to conduct local events and pressure members of Congress from beyond the Beltway.”

Unlike the business-oriented, middle-of-the-road approach taken by USCAP, Health Care for America Now pushed on what Skocpol described as the “left edge of the possible.” While many on the right still cling to the hope that a Republican Congress or conservative Supreme Court will take away millions of Americans’ health care — a testament to the enduring power of the tea party — even the most technocratic environmentalists have abandoned cap and trade. As Skocpol concluded: “The political tide can be turned over the next decade only by the creation of a climate-change politics that includes broad popular mobilization on the center left.”

Remarkably, over the course of the 2010s, climate activists built such a movement. After decades of professionalization, environmental groups started investing in grassroots organizing again. They built up mailing lists by explicitly taking on corporate polluters and engaging their bases in campaigns to stop extractive projects and to pass new laws where the political fundamentals allowed for reforms. They gathered by the thousands to block the construction of fossil fuel pipelines on Indigenous lands in North Dakota, South Dakota, and Minnesota.

Their numbers grew. And they brought those numbers to the streets, marching by the millions in New York City, Washington, D.C., and San Francisco. Perhaps most importantly, through campaigns like the school strikes for climate, they swelled the green ranks with youth, many younger than 25 and some even younger than 15. And where the big old green groups had failed them, young people founded new organizations like the Sunrise Movement.

In 2018, the then-little-known youth climate movement was among just a handful of organizations that endorsed a Puerto Rican bartender from the Bronx named Alexandria Ocasio-Cortez in her primary challenge against the third-highest-ranking Democrat in the House. Her victory won them and many others on the left an audience with the Democratic establishment, most notably Chuck Schumer, now Senate majority leader, an old-school New York politician eager to guard his left flank from the threat of a primary.

Later that year, Sunrise led a sit-in in House Speaker Nancy Pelosi’s office, calling on Democrats to back a Green New Deal. Ocasio-Cortez worked with Sen. Ed Markey, the elder statesman after whom Waxman-Markey was named, on a resolution outlining their vision. In the 2020 Massachusetts Democratic primary, Sunrise defended Markey against a challenge from a young U.S. representative with the last name Kennedy. There are 20-somethings who now call the 75-year-old senator their “Green New Daddy” on Twitter.

Biden and his party never wholly endorsed Markey, Ocasio-Cortez, and the Sunrise Movement’s Green New Deal. But the 46th president did cite the resolution as a source of inspiration. The Build Back Better Act — especially its climate provisions — looked, to me and others, to be progressive and ambitious in its original form. Sunrise and the climate movement won a whole heck of a lot on the left edge of the possible. It just so happened that the possibility-defining 50th vote belonged to the guy who got elected aiming a rifle at the last climate bill.