White House officials’ stock divestments and recusals are hidden from public view, thanks to ethics law gaps and a lack of transparency from the Biden administration. 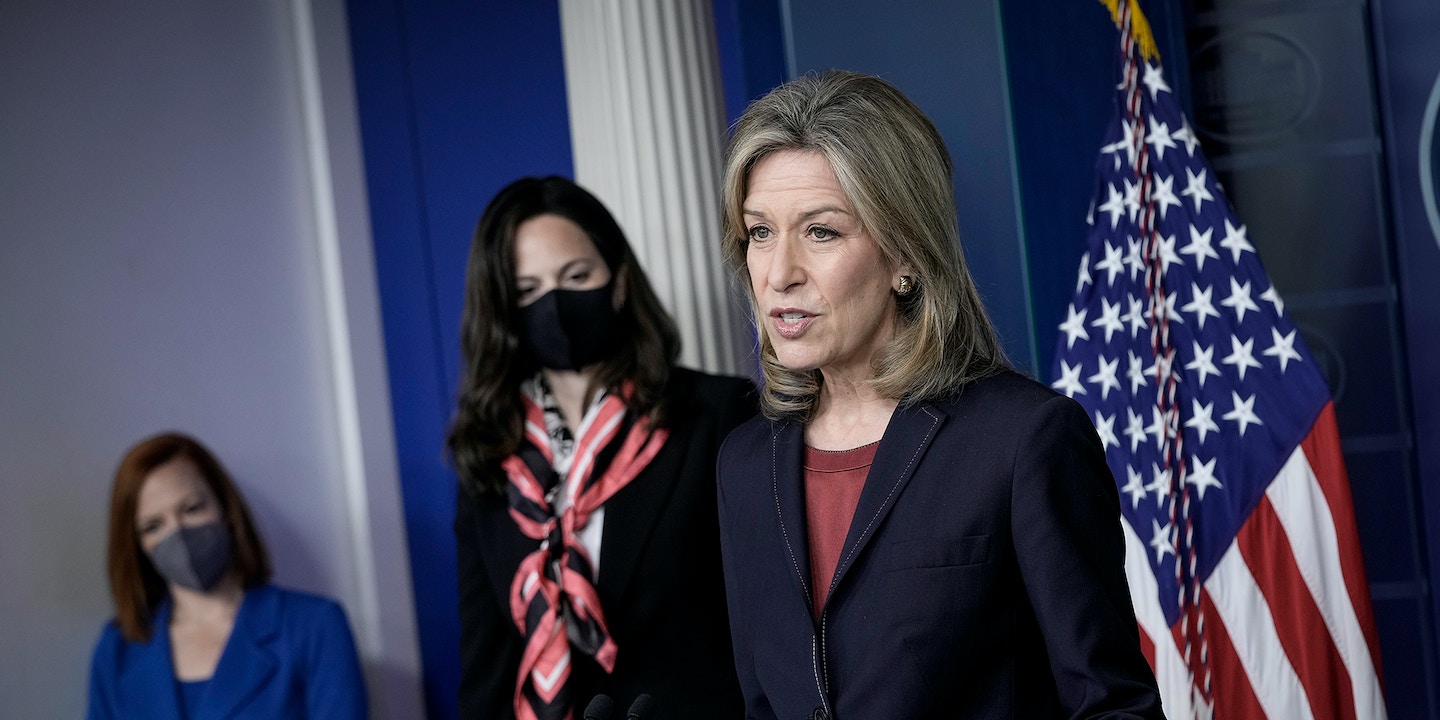 When Homeland Security adviser Elizabeth Sherwood-Randall joined the White House in January 2021, she held vested employee stock options at two growing companies in the cybersecurity industry. Cybersecurity was poised to be front and center for the Biden administration, given the massive breach of software company SolarWinds in 2020 that raised alarms about vulnerabilities in the U.S. government and economy. Sherwood-Randall signed a financial disclosure form pledging to divest her assets at Dragos and Resilience, for which she had served on the advisory boards, and had a recusal arrangement in place in the meantime to avoid a conflict of interest.

But Sherwood-Randall waited months to exercise the options, worth between $50,000 and $100,000 at Dragos and less than $15,000 at Resilience, according to a periodic transaction filing. The purchase occurred just before the Dragos options were set to expire — and just as the White House released a strategy to protect the U.S. electric grid from cyber attacks. A National Security Council, or NSC, spokesperson acknowledged that Sherwood-Randall had participated in the plan, even though Dragos reportedly monitors 70 percent of the U.S. electric grid for cyber intrusions and shares insights with the federal government through a program called Neighborhood Keeper.

“The optics are not good,” said Walter Shaub, senior ethics fellow at the Project on Government Oversight and former director of the Office of Government Ethics. “She chose to wait 85 days to exercise the stock options. They were vested. She could have sold them on January 20, the day she started her new job.”

Sherwood-Randall “contributed at the strategic level” to the cybersecurity plan, the NSC spokesperson acknowledged, adding she “abided by and is fully compliant with both statutory and regulatory requirements, as well as the Ethics Pledge issued by President Biden on his first day in office, and all appropriate recusals were in place.” Deputy national security adviser Anne Neuberger led development of the plan, they said, and continues to oversee “its industry-wide policy implications, which are not targeted at and do not single out any specific company.”

But U.S. law bans participation in matters with a wider focus than just an individual firm. Office of Government Ethics guidelines state that federal employees with a financial interest must recuse themselves from policymaking that affects a particular industry. The NSC declined to comment on the record about whether Sherwood-Randall’s work met that standard.

“If, as seems to be what you’re saying, they claim the law doesn’t apply to matters focused on specific industries (as opposed to individual companies) they are dead wrong,” Shaub said in an email.

A second NSC spokesperson also said that Sherwood-Randall followed all the appropriate steps to dispose of her assets in Dragos and Resilience after exercising them but would not share information about the timing or nature of her divestment. A review of her recent periodic transaction filings shows that Sherwood-Randall did not sell them in the public market. Anemic U.S. ethics laws only require public reporting of purchases and sales of stocks, not divestments by other means. As such, the public is left to speculate how and when Sherwood-Randall got rid of her Dragos and Resilience shares after exercising them. Other common ways of divesting are by gifting assets to a family member or charity or placing them into a trust.

If Sherwood-Randall did gift the options to relatives, they would have gained quite a lot. Reporting from Bloomberg in October revealed that BlackRock and Koch Industries approached Dragos about an investment and raised $200 million for the company, which quadrupled its valuation to $2 billion, enough to go public. Resilience CEO Vishaal Hariprasad also got a sit-down with President Joe Biden and CEOs from Apple, Amazon, Microsoft, and JPMorgan Chase in August to discuss cybersecurity threats. In November, the company raised $80 million to expand its operations. An NSC spokesperson declined to say whether Sherwood-Randall played a role in the Resilience meeting with Biden and the Big Tech executives but insisted that she had divested prior to these events.

The refusal to provide detailed information about her recusal or divestments flies in the face of the Biden administration’s claims that it is “cracking down on corruption and promoting transparency.” Despite heightened concern after the Trump administration, the Biden White House has not plugged holes in U.S. ethics laws that allow senior officials to get rid of their financial interests and make weak recusal agreements behind closed doors. The gaps risk disincentivizing speedy dispossessions, enabling conflicts of interest, and leaving the public uncertain of whether policymakers are operating in good faith.

On his first day in office, Biden issued an executive order banning officials from participating in meetings with former employers unless other companies in the industry had access too. The executive order sought to alleviate concerns about accountability in government by having appointees pledge to observe a number of ethics commitments while serving in government and afterward. But the Biden administration has hardly raised the bar on transparency around perceived conflicts of interest and doesn’t proactively release information about recusals and divestments that weak federal laws overlook.

“A White House that truly understood the loss of public trust after the Trump era and the ethics crisis in our government would release details of recusal arrangements.”

Even a report revealing a sale of a prior company’s stock is not a clear confirmation of a divestment.

Domestic policy adviser Susan Rice committed to disposing of her more than $1 million in options and stocks at Netflix, for which she served on the board of directors prior to joining the White House. Biden announced that he would appoint Rice to the position in December 2020, but her periodic transaction reports reveal that she waited until the summer of 2021 to sell off at least $1 million of the shares, and her original disclosure hasn’t been updated to clarify whether this amounted to a total divestment. We also don’t know if she had a recusal arrangement in place in the interim.

After publication, Patrick Rodenbush of the Domestic Policy Council emailed The Intercept stating: “Ambassador Rice has fully divested her Netflix stock and to avoid any conflicts of interest was recused from all matters involving Netflix during the interim period.”

According to Shaub, who led the Office of Government Ethics during the Obama and Trump administrations, there has never been a practice of publicly releasing information about officials’ recusal arrangements and divestments. “It’s one of many ways the law needs to be strengthened,” Shaub told The Intercept, though he also argued that Biden could provide this information voluntarily.

“A White House that truly understood the loss of public trust after the Trump era and the ethics crisis in our government would release details of recusal arrangements and would proactively notify the public of divestitures,” he said. “This is not that White House.”

Update: January 28, 2022, 6:05 p.m. ET
This article has been updated to reflected a response from the Domestic Policy Council about Susan Rice’s holdings in Netflix that were received after publication. It has also been updated to add further comment from the NSC.

Correction: January 28, 2022, 10:23 p.m. ET
The article has been updated to remove reference to nominee Jed Kolko’s investments, as he has yet to be confirmed.