A coalition called on the Judiciary Committee to investigate, as Democrats consider pivotal antitrust initiatives. 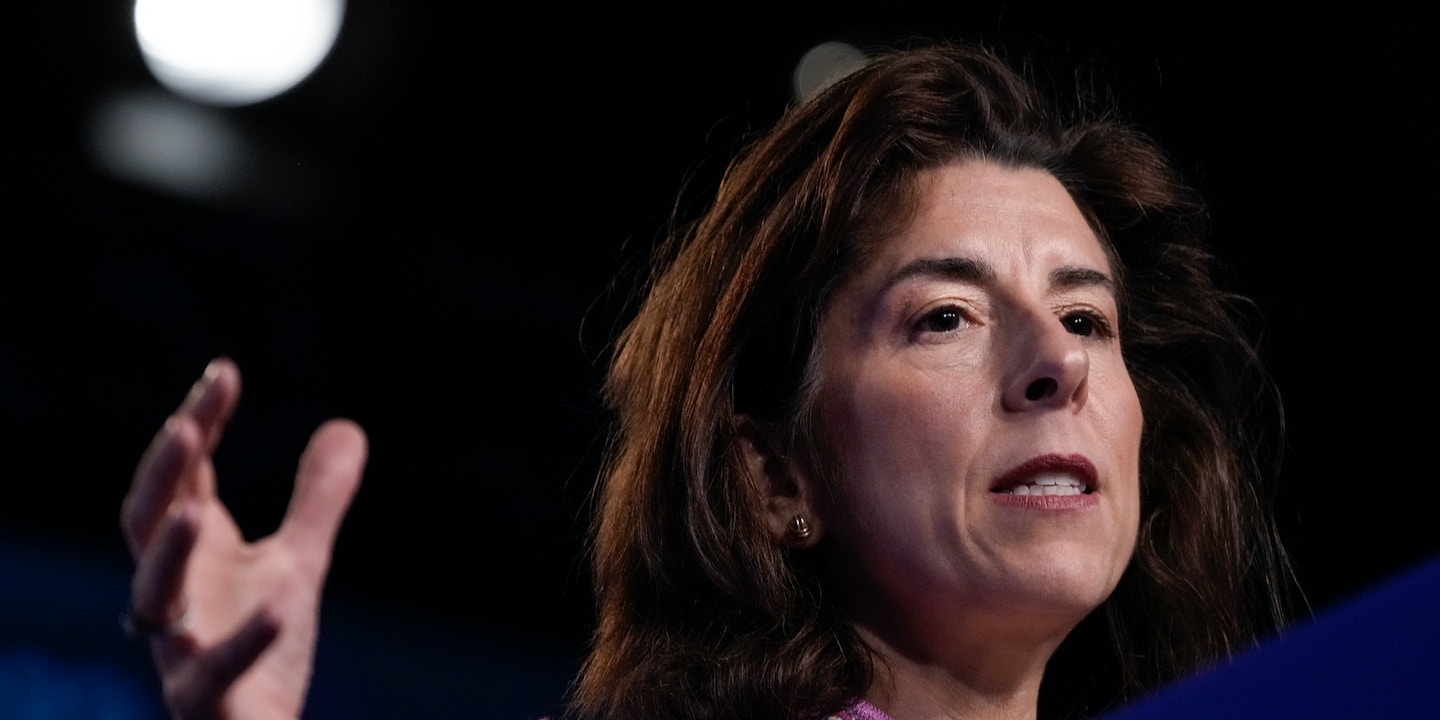 For months, Commerce Secretary Gina Raimondo has ignored calls to reveal whether she’s meeting with Big Tech representatives, while criticizing groundbreaking antitrust regulations in the European Union to rein in technology giants, according to a coalition of watchdogs. They’re calling on the Senate Judiciary Committee to investigate the Commerce Department’s refusal to respond to a Freedom of Information Act request, alleging its inaction stands “to further erode Americans’ trust in their elected officials.”

“Secretary of Commerce Gina Raimondo’s adamant and ongoing refusal to release her calendar records, a simple and routine task expected of federal officeholders, is one recent example of conduct that warrants full attention from the Senate Judiciary Committee given your ongoing concern over FOIA practice and administration,” the coalition of 14 watchdogs, including Public Citizen and Revolving Door Project, said in a letter obtained by The Intercept. The letter was sent on Monday to Senate Judiciary Committee Chair Dick Durbin, D-Ill., and Ranking Member Chuck Grassley, R-Iowa. The Commerce Department has not replied to a request for comment from The Intercept.

Raimondo set off alarms with antitrust advocates when she criticized proposed EU regulations targeting Big Tech in December. Yelp, the News Media Alliance, and others raised concerns about her critiques of the proposals, called the Digital Services Act and Digital Markets Act, and sought to meet with her. The watchdogs began publicly demanding Raimondo release her calendars to allay any concerns that technology giants had undue influence over her stance, but those appeals have gone unanswered, as have their FOIA requests. Meanwhile, other powerful officials, like Federal Reserve Chairman Jerome Powell, routinely release their calendar schedules.

The watchdogs are especially concerned that Raimondo’s criticism of the EU’s attempts to crack down on Big Tech diverge from the policy priorities of the Biden administration, which supports efforts to rein in technology giants and other concentrated markets. The president released an executive order in July to promote competition in the economy, arguing that the few dominant internet platforms gain monopoly profits. The Justice Department also endorsed a major Big Tech antitrust bill that aims to prevent discrimination against competitors that passed out of the Senate Judiciary Committee in January and is similar to the EU proposals.

“While there is nothing nefarious per se about Raimondo holding differing positions from her colleagues, her resistance to transparency has fueled speculation that she is purposefully and illegally trying to shield her contact with representatives from Big Tech companies from public view,” the watchdogs wrote.

Raimondo’s opaqueness has also fueled critiques from Sen. Elizabeth Warren, D-Mass. The senator sought information about Raimondo’s repudiation of the EU proposals but did not receive a reply for months. The secretary ultimately said she supports efforts to increase competition but the administration opposes “efforts that are specifically designed to target U.S.-based companies,” the Washington Post reported in March. Warren nevertheless chastised Raimondo, telling the publication: “It’s inexcusable that Secretary Raimondo does not take congressional oversight seriously and continues to avoid transparency around the Commerce Department’s lobbying on behalf of Big Tech companies overseas.”

The coalition warns that by not disclosing her calendars, she reminds the group of her predecessor in the Trump administration, Wilbur Ross, who notoriously had conflicts of interest in his stock holdings and met with Chevron and Boeing representatives, which his wife owned stakes in at the time.

“Raimondo’s refusal to accommodate basic requests for information about her conduct as a public servant harken back to the tenure of her predecessor, former Secretary Wilbur Ross,” the watchdogs wrote. “In an era marked by low public confidence in government, the actions of the Commerce Department only stand to further erode Americans’ trust in their elected officials.”

Meanwhile, Raimondo has already come under scrutiny from Republicans on the House Energy and Commerce Committee due to concerns about foreign ties to her husband’s employer. According to a report from the Washington Free Beacon, the company, PathAI, has financial support from a venture capital firm that’s backed by the Chinese Communist Party.