After 30 Years Insisting on His Innocence, Claude Garrett Is Free

Having twice convicted Garrett for setting a fatal fire in 1992, the Nashville DA’s office dropped the charges against him, facilitating his release. 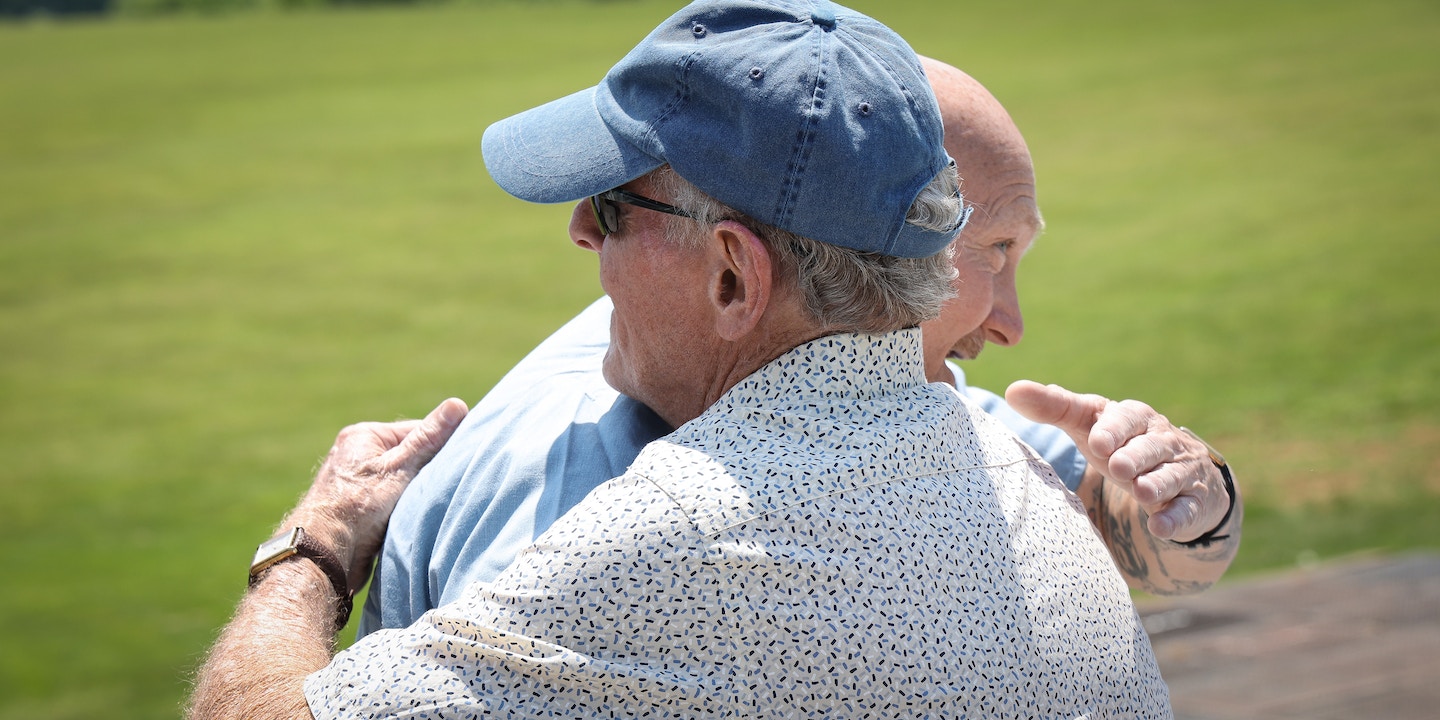 A few hours after a judge authorized Claude Garrett’s release from prison, the small crowd outside Riverbend Maximum Security Institution in Nashville, Tennessee, got a message to their group text. It came from Garrett’s daughter, Deana Watson. Garrett was packed and ready to go, but there was paperwork to be done downtown. She typed a version of an update she herself had received countless times over the years: “Still waiting.”

It was just after noon on May 10. Davidson County Criminal Court Judge Monte Watkins had vacated Garrett’s conviction the previous Friday. Someone speculated that the person with the paperwork must have gone on their lunch break. Another person joked that it was being transported via carrier pigeon. But nobody was really complaining. “It’s over and the best is yet to come,” someone wrote in the group text.

Garrett was used to waiting. It had taken about 28 years, after all, for the Davidson County District Attorney’s Office to make the decision to reinvestigate his case. When the DA’s Conviction Review Unit finally agreed with what Garrett had insisted all along — that he’d been wrongfully convicted of setting the fire that killed his girlfriend in 1992 — there was another round of waiting: first for an evidentiary hearing in which fire scientists explained why the case against Garrett had been fatally flawed, and finally for the judge to sign the order vacating his conviction.

Earlier that day Garrett had been transported downtown for one last court appearance, where Sunny Eaton, the director of the Conviction Review Unit, announced that the DA was dropping the charges against him. Garrett’s friends and family expected him to walk out of court, but they were told by his lawyers that he would be taken back to Riverbend first. The maximum-security prison sits less than 20 minutes from downtown Nashville, near a small airport on a mostly industrial stretch of road. Unsure when he might be released, a small group gathered first at a nearby gas station, then at a spot just outside the prison’s entrance.

In a baseball cap and sunglasses, Denny Griswold held a black umbrella over his wife to protect her from the sun. Griswold had met Garrett through the prison outreach ministry at his church 14 years earlier. Over time he had become a mentor to Garrett — and a firm believer in his innocence. Griswold came to court that morning with a change of clothes for him. Garrett had not asked for anything in particular. “He’ll look like an average old man,” Griswold said, smiling.

A few feet away, veteran fire investigator Stuart Bayne stood quietly, holding a book he’d been waiting to give to Garrett, which he’d asked everyone to inscribe. It was a memoir by the founder of a nonprofit organization that advocates for the wrongfully convicted. The title was enough to move Bayne to tears: “When the Truth Is All You Have.” From the moment he first studied the evidence as an expert witness for Garrett’s 2003 retrial, Bayne had been consumed by what was clearly a miscarriage of justice. For years he had been one of Garrett’s sole advocates; it was only relatively recently that a wave of leading fire scientists joined the cause.

In phone calls with Garrett, Bayne occasionally joked about showing up with champagne in the parking lot on the day of his release. Garrett reminded him that was contraband. But now Bayne was more contemplative than celebratory. At one point, Watson sent a photo of a large plastic box truck containing piles of paperwork her dad was taking home with him. “Wow,” Bayne said quietly. “That represents 30 years of his life. He kept everything. All our letters, all his appeals, all the stuff I’ve sent him. My goodness.”

It was just after 1:30 p.m. when Watson’s black SUV finally made its way down the hill from the prison. Seconds later, Garrett emerged from the passenger’s seat. “Who do I hug first?” he asked. A TV camera followed Bayne as he strode toward the car. Garrett approached the man who had been fighting to help him clear his name for more than 20 years. They shook hands and then broke into a hug. “Welcome to the free world,” Bayne said. Stuart Bayne gifts Claude Garrett the book “When the Truth is All You Have” upon Garrett’s release from prison.

Garrett’s release was the culmination of a long legal fight whose outcome would have been hard to foresee just a few years ago. In the decades he spent insisting upon his innocence, Garrett never fathomed that the same office that sent him to prison for life would eventually advocate for his release. Yet the statement from Eaton was clear: “Following an extensive collaborative investigation between the Nashville District Attorney’s Conviction Review Unit and the Tennessee Innocence Project, Claude Garrett has been exonerated for the wrongful conviction of the murder of Lorie Lance.”

Garrett was twice convicted of setting the fire that killed 24-year-old Lance in the small home they shared in Old Hickory, Tennessee. The couple had returned from a local bar in the early morning hours of February 24, 1992, when Garrett said he awoke to find a fire in the living room. According to Garrett, he woke up Lance and ran with her toward the front door, only for Lance to turn and run toward the rear of the house. Firefighters later found her in a utility room, dead from smoke inhalation.

Although neighbors initially described Garrett as frantic, investigators became suspicious upon smelling kerosene at the scene. The lead investigator, James Cooper — a special agent with the Bureau of Alcohol, Tobacco, Firearms and Explosives — seized on a so-called pour pattern on the living room floor as proof that an ignitable liquid had been used to start the fire. Perhaps most critically — and despite evidence to the contrary — Cooper also concluded that the utility room had been locked from the outside, trapping Lance.

Garrett’s case is one of countless convictions across the U.S. based on forensic evidence that has since been debunked. In the decades following Lance’s death, new developments in fire science transformed the techniques used to determine whether a fire was arson. But even as investigators have discarded the myths they once relied on in favor of the scientific method, prosecutors have been slow to revisit old convictions. This problem spans well beyond arson cases. Many DA’s offices continue to fight to preserve convictions even when the underlying evidence has been exposed as junk science.

Today the Davidson County DA’s office is an exception to that rule. Since Eaton took charge of the Conviction Review Unit in 2020, the office has ramped up its work. Last year it exonerated a Nashville couple accused of raping and murdering a 4-year-old child in 1987. That conviction was based on the faulty analysis of a medical examiner who also played a key role in Garrett’s conviction.

The decision to reinvestigate Garrett’s case was prompted largely by The Intercept’s coverage, dating back to 2015. Although a number of fire experts had concluded by then that the conviction was based on junk science, the first in-depth story revisiting the case attracted an additional cohort of fire scientists, who studied the evidence and released new reports debunking the state’s arson theory. While the courts initially dismissed this new evidence, a follow-up story in 2018 caught the attention of the DA’s office, which had recently launched the Conviction Review Unit.

Standing outside the prison after his release, Garrett thanked The Intercept and all who had drawn attention to his wrongful conviction. It was only recently that he had even allowed himself to think about a future beyond prison walls. For years, Bayne said, Garrett would say, “It’s too early to think about this. … It’s too early to plan these things. … I just gotta get the door open.” Now Garrett wanted to focus on making up for lost time with his daughter. Watson was only 4 years old when Garrett went to prison. She now had a son that same age. That afternoon Garrett spoke to his grandson via FaceTime — “one of the best parts of the day.”

Later that evening, Garrett sat next to Watson at a restaurant just north of downtown Nashville. He’d changed out of his prison blues and into the clothes Griswold gave him: a gray collared shirt and dark blue jeans. As Watson ordered appetizers, Garrett sampled a little bit of everything — truffle fries, crab-stuffed mushrooms — but declined an entrée. He was trying to pace himself, he explained. After leaving prison earlier that day, they had stopped for food at Chick-fil-A, where he’d gotten a sandwich. “I’ve still got half of it,” he said.

There was so much to navigate. Some things he had long anticipated, like learning to use a cellphone. But he hadn’t realized that everybody would be looking at their phones all the time. Then there were the things other people took for granted. At Griswold’s house earlier that day, where he spent his first few hours of freedom, there was a bowl of berries in the kitchen. He realized that he hadn’t seen a strawberry in 30 years.

One of the most overwhelming things was seeing the city of Nashville itself. In the decades he’d been in prison, the city had completely transformed. Garrett remembered a trip downtown for a hearing in the late 1990s. Turning off the highway toward the courthouse, “You could see all of downtown,” he said. “It occurred to me right then … ‘All of that is against you.’” Coming to the restaurant that evening, he realized that he was in the same spot, although one of the street names had changed. “I looked at it again, and I’m like, what the hell happened?”

Other changes were more painful. Garrett counted the number of friends and family who had died in the decades he’d been gone. It was more than 50 people. Among the few plans he had made was going to Kansas to visit his mother’s grave. Otherwise, he said, “I’m not gonna try to plan much. I’m gonna let it unfold as it goes.”