Bush’s push would give the White House $100 million in clean energy funding to use through the Defense Production Act. 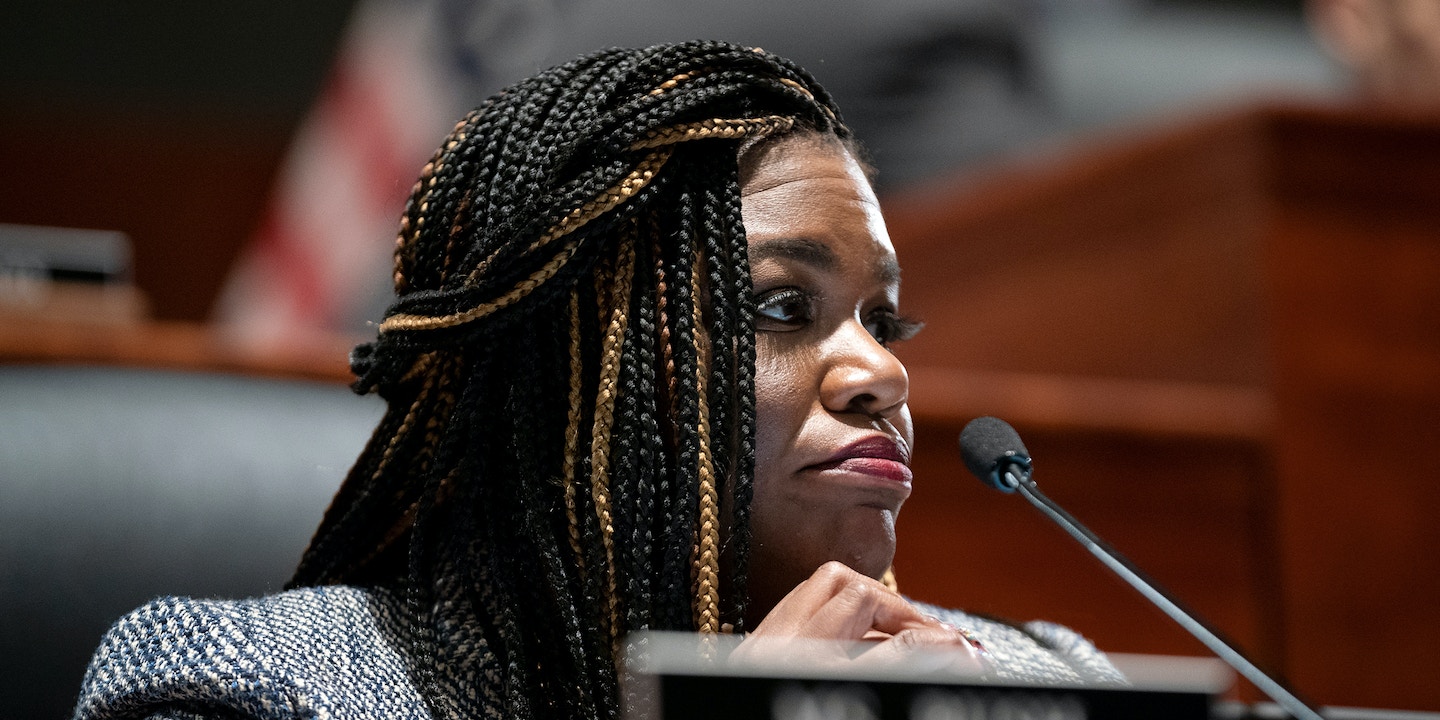 President Joe Biden’s efforts to tackle the climate crisis through executive action got an assist this week, courtesy of Missouri Rep. Cori Bush and Democrats on the House Appropriations Committee. One hundred million dollars in new funding, announced Tuesday alongside other measures in the upcoming Energy and Water Development and Related Agencies annual appropriations bill, would give the president resources to accelerate the production of solar panels, transformers, and other green technologies.

In the face of a stalled legislative agenda, Biden has turned to the Defense Production Act, invoking it twice this year to boost the production of green energy technology — once in April and again earlier this month. The DPA enables the president to make large adjustments to U.S. manufacturing policy — an authority that House progressives have been calling for Biden to use more aggressively. Senators of both parties, including Joe Manchin, D-W.Va., and Lisa Murkowski, R-Alaska, have also called on Biden to use the DPA to support green technology manufacturing — making passage into law, once the appropriations bill passes the House and is amended in the Senate, more likely.

The new funding would strengthen the effectiveness of Biden’s action and bolster precedent for using executive authority to fight the climate crisis. The text of the provision gives Biden wide latitude in deciding how exactly to use the funds in support of those technologies, as is standard for policy created through the DPA.

The measure’s inclusion was the result of a last-minute, behind-the-scenes effort by Bush, whose office has regularly led efforts for bold climate legislation. In a statement provided to The Intercept, Bush praised the inclusion of the funding. “The DPA is one of the most important tools we have to take on high gas prices and the climate crisis at the same time,” she said. “To protect all of our communities, particularly those with the greatest need, we must take robust measures to transition to renewable energy and lower prices as quickly as possible. This funding helps us achieve that.”

Progressives in Congress have called on Biden to use his broad executive authority to make headway on a suite of Democratic priorities. In March, the Congressional Progressive Caucus pushed Biden to invoke the DPA as part of an aggressive administrative response to the climate crisis. Bush also introduced similar legislation with Sen. Bernie Sanders, I-Vt., and Rep. Jason Crow, D-Colo., to bolster the Defense Production Act earlier this year.

But while House leadership and the White House have been broadly supportive of the provision, Biden’s latest invocation of the DPA left members of the House Appropriations Committee with little time to account for the new policy in ongoing negotiations. After individual Appropriations subcommittees receive their top-line figures, which in this case roughly coincided with Biden’s announcement at the beginning of June, it is difficult to secure funding for new priorities. By coordinating discussions among the White House, House Speaker Nancy Pelosi’s office, and Rep. Marcy Kaptur, D-Ohio, chair of the House Appropriations Subcommittee on Energy and Water Development, Bush — a first-term representative — exerted a rare amount of influence over a process that is usually guided by senior members of the caucus.

In a press release marking the subcommittee’s release of the draft bill, Kaptur touted the inclusion of the DPA funding, indicating that Bush’s efforts have significant buy-in from key players in the appropriations process. “From unleashing energy innovation and utilizing the Defense Production Act to boost domestic manufacturing, to responsibly managing water resources and tackling the crisis of climate change – this Energy and Water bill delivers for America’s needs in the 21st century,” Kaptur said.

If the new funding survives ongoing negotiations, it may embolden progressives to demand more executive action from the administration. Legislation that endorses Biden’s use of the DPA to support green energy technology would provide the administration with a layer of insulation from legal challenges over the issue going forward. If Democrats lose one or both chambers of Congress in November, that precedent could be key to ensuring that the administration has tools to continue fighting the climate crisis.