Mohammed bin Salman tried to exploit Joe Biden’s failure to condemn Israel for the killing of Shireen Abu Akleh to deflect blame for the Saudi assassination of Jamal Khashoggi. 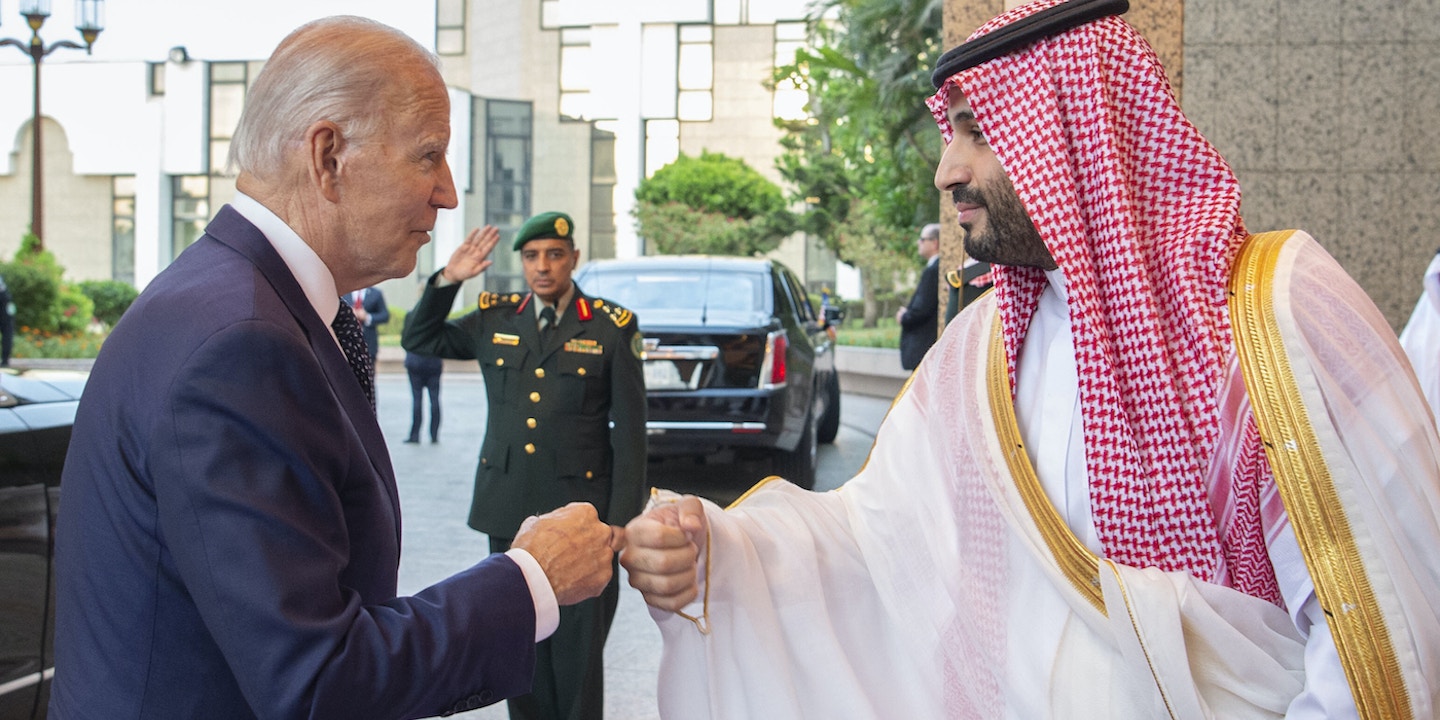 Saudi Crown Prince Mohammed bin Salman reportedly accused President Joe Biden of hypocrisy during their meeting in Jeddah, Saudi Arabia, on Friday by asking why the murder of Washington Post columnist Jamal Khashoggi seemed to matter more to him than the fatal shooting of Al Jazeera correspondent Shireen Abu Akleh.

Biden, who said during his campaign for the presidency in 2019 that Khashoggi had been “murdered and dismembered … I believe on the order of the crown prince,” told reporters that he had confronted Crown Prince Mohammed over the killing of the dissident Saudi journalist at the start of their meeting this week.

But according to a Saudi official who spoke to the state broadcaster Al Arabiya, the prince contrasted Biden’s concern about the brutal murder of Khashoggi, a long-term resident of the U.S., with his failure to hold Israel’s government accountable for the killing of Abu Akleh, an American citizen who was shot — according to witnesses and visual investigations — from an Israeli military convoy.

Saudi official gives MBS's response to Biden when he asked about Khashoggi. "You can't impose your values on us by force. Remember Abu Ghraib? What have you done about Shireen Abu Akleh?". Yes MBS literally said that to Biden. https://t.co/9DQDrWVM2L

Ayman Mohyeldin of MSNBC also reported that a Saudi official told him that Crown Prince Mohammed, known as MBS, denied that he had ordered the assassination, “the same way George Bush did not order the abuse and torture at Abu Ghraib prison in Iraq.” The crown prince then asked, according to Mohyeldin’s source, why, “with so many U.S. journalists killed, missing, or detained,” including Shireen Abu Akleh, “the murder of Jamal Khashoggi was being politicized.”

Saudi state television was also careful to keep viewers inside the repressive kingdom from hearing Biden reiterate the CIA conclusion that the crown prince had ordered the murder of Khashoggi by a Saudi hit squad in Turkey in 2018.

When Biden was asked during a news conference in Jeddah on Friday night how Crown Prince Mohammed had responded to his comments about Khashoggi, Al Arabiya’s sister station Al Hadath cut away from its live broadcast so abruptly that its studio anchor and control room seemed to be caught off guard. After viewers heard Biden begin, “He basically said that he was not personally resp—” the picture jumped back to a startled anchor who took four seconds to start speaking. Then when she did, her mic was not on.

Here's how abruptly the Saudi state broadcaster ?@AlHadath? cut away from Biden's live news conference on Friday when he was asked how Mohammed bin Salman had responded to his criticism of the murder of Jamal Khashoggi - before their anchor or control room was ready: pic.twitter.com/3riRxDgI8B

A C-SPAN clip of the same moment from the news conference shows that what Saudi viewers nearly heard Biden say was: “He basically said that he was not personally responsible for it. I indicated that I thought he was.”

Earlier on Friday, Biden was confronted with images of Shireen Abu Akleh at a news conference in Bethlehem, West Bank; her colleagues in the press corps had reserved a seat for a photograph of the renowned Palestinian American journalist, and several wore T-shirts with a drawing of her face above the words “Justice for Shireen.”

#ShireenAbuAkleh’s presence is strong, even when she’s absent. Colleagues at the Presidential HQ in Bethlehem demanding #JusticeForShireen during Biden visit. pic.twitter.com/FkQY904QY5

In a letter to the White House last week, Abu Akleh’s family asked Biden to meet with them during his trip to the region and expressed their anguish that the U.S. seems unwilling to press Israel to open a credible criminal investigation into her killing. Instead, the family has been invited to Washington by Secretary of State Anthony Blinken.

At the news conference in Bethlehem, standing alongside Palestinian President Mahmoud Abbas, Biden called Abu Akleh’s death a loss for the U.S. as well and promised to “insist on a full and transparent accounting of her death.” His sincerity, in the eyes of many critics, was undermined, however, by his inability to pronounce Abu Akleh’s last name correctly.

Not only has the Biden administration done precious little to ensure that those in the Israeli occupation forces who murdered Palestinian-American journalist Shireen Abu-Akleh, are held accountable, he also garbles her name.