Even the Democratic Establishment Couldn’t Beat Back AIPAC

With the defeat of former Maryland Rep. Donna Edwards, the Democratic Party appears to have lost control of its own nominating process. 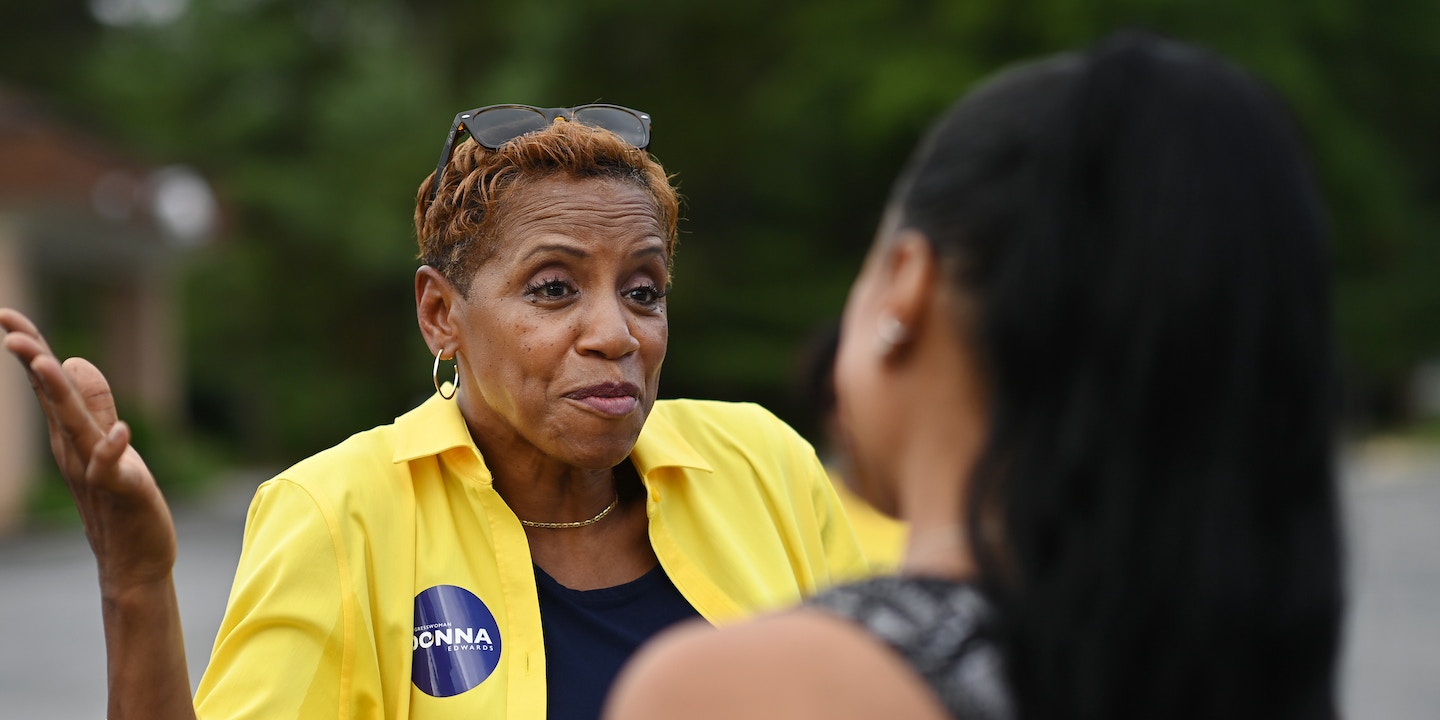 As recently as May, the return of popular former Maryland Rep. Donna Edwards seemed all but inevitable. Edwards, whose original tenure began after she trounced an eight-term incumbent in 2008, had the support of figures and organizations across the Democratic Party. Early polling gave her a comfortable lead over her opponent, corporate attorney and former State’s Attorney for Prince George’s County Glenn Ivey.

On Tuesday, Ivey came out with 51 percent of the vote to Edwards’s 35, an insurmountable margin despite the thousands of mail ballots that remain to be counted. In an interview with the Washington Post Tuesday night, Ivey thanked two key coalitions: his grassroots campaign supporters and the American Israel Public Affairs Committee, along with its affiliated political action committee, the United Democracy Project.

While progressive activists and candidates have long sounded the alarm on AIPAC’s aggressive push to become the biggest player in party primaries, Democratic leadership has typically taken the side of the Israel lobby. When progressive insurgents-turned-sitting members of Congress like Ilhan Omar, Rashida Tlaib, Alexandria Ocasio-Cortez, and Cori Bush have spoken out against the Israeli military’s brutal abuses of Palestinian people, leadership has proven hesitant to defend them from AIPAC’s resulting attacks.

The increasingly unlikely prospect of a two-state solution and the increasingly visible crimes of the Israeli occupation — including the killing of Palestinian American journalist Shireen Abu Akleh in May and the routine, relentless bombings in the Gaza strip — have gone mostly unaddressed by Democratic congressional leaders, who repeatedly approve the provision of unchecked and unparalleled military aid to Israel. But when the lobby turned on Donna Edwards, the party establishment had at last had enough.

The coalition of endorsers who supported Edwards included everyone from House Speaker Nancy Pelosi and former Democratic presidential nominee Hillary Clinton to progressive Massachusetts Sen. Elizabeth Warren and the Maryland affiliate of Our Revolution, the left-wing activist organization that grew out of Vermont Sen. Bernie Sanders’s 2016 presidential run. Edwards swept the endorsement of practically every local and national labor union and advocacy organization. A candidate with the name recognition and broad support that Edwards pulled together should have been unbeatable.

Then the ads started pouring in.

Starting in mid-June, the American Israel Public Affairs Committee spearheaded an unprecedented onslaught of outside spending in Maryland’s 4th Congressional District. Their super PAC, the United Democracy Project, spent $6 million on television spots, mailers, and other media knocking Edwards over thinly sourced claims about constituent services. Some of that spending also funded glowing spots on Ivey, whose name recognition heavily lagged Edwards’s in the early days of the race. Other pro-Israel organizations pitched in about $1 million more. The result was one of the most expensive congressional primaries in history, with nearly all of the money coming from outside the district over the course of only a few weeks.

AIPAC targeted Edwards largely because of her close relationship with liberal pro-Israel group J Street. During her previous tenure in Congress, Edwards took a number of votes and public positions that expressed support for Palestinian rights and the resumption of a meaningful peace process — positions that are hard to characterize as outside of the mainstream.

But her past refusal to unconditionally support funding that enables Israel’s ongoing occupation and destruction of Palestinian communities was more than enough to draw the ire of the conservative pro-Israel donors who mobilized to defeat her. Her support for single-payer health care and her early championing of sweeping campaign finance reforms also likely made her a target of the corporate-friendly interests that have made common cause with conservative pro-Israel groups this cycle.

Edwards’s loss is a wake-up call to Democratic leadership, whose support went beyond mere endorsements. Despite her longtime progressive positioning, Edwards maintained strong relationships with party leaders during her time in Congress and rarely bucked the party line. Last month, Pelosi returned that favor by recording a video directly responding to the claims AIPAC made against Edwards in the bulk of their advertisements. For Pelosi, a staunch AIPAC ally who rarely strays from the group’s extreme positions, the move was remarkable. Pelosi’s office did not immediately respond to The Intercept’s request for comment.

Progressive candidates have, in some cases, managed to notch wins in the face of the aggressive push by AIPAC and its allies — most notably Summer Lee, who narrowly overcame millions of dollars in attack ads in her race against attorney Steve Irwin in Pennsylvania. But the massive spending campaigns seeking to thwart those candidacies have left progressive organizations, whose resources are dwarfed by the millions AIPAC appears capable of marshaling on demand, with little choice but to pick their battles carefully. In Nina Turner’s recent challenge against Ohio Rep. Shontel Brown, for example, Turner’s former backers at Justice Democrats said they couldn’t take her campaign on this cycle: They’d been “massively outgunned” by Republican donors and the Israel lobby.

The $600,000 Edwards received from J Street in defense of her candidacy would be considered a heavy lift under the old rules of engagement. At the time of its announcement, it was the largest independent expenditure the group had ever made — though J Street has since topped it with a $700,000 buy in defense of progressive Jewish House member Andy Levin, D-Mich., another AIPAC target.

In both cases, the previously unthinkable amounts are small fractions of the spending they are meant to counter. And the Democratic Party, it seems, may have lost control of a monster it once considered an ally.