House Democrats’ new spot links the former Trump official to the Saudi effort to maintain immunity from liability for 9/11. 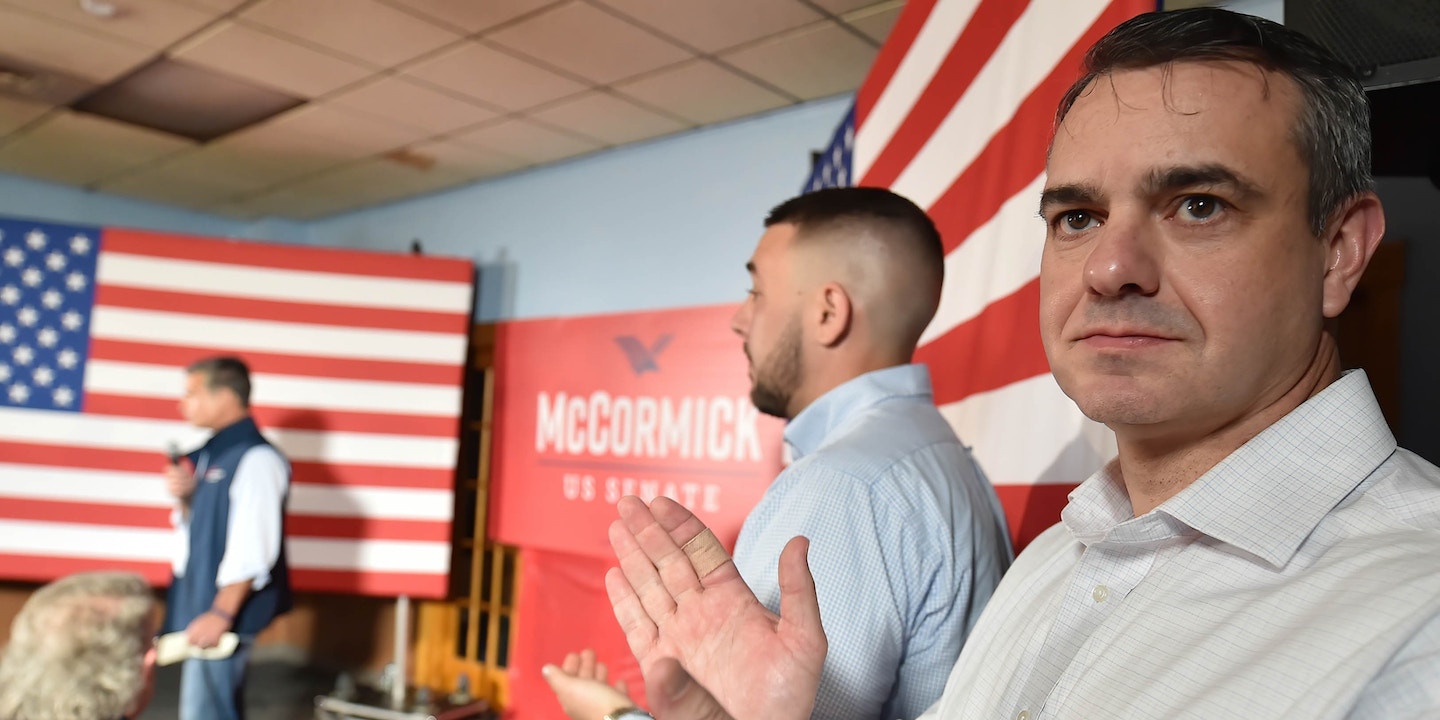 Before joining the Trump administration, Jim Bognet, a Republican candidate for Congress in Northeastern Pennsylvania, was a senior vice president at one of Saudi Arabia’s most powerful lobbying firms in Washington, D.C. — a tenure that a Democratic super PAC plans to make a major issue in one of the country’s most important House races.

House Majority PAC, the super PAC that backs congressional Democrats, began running an ad Tuesday that is about as hard-hitting as they come in politics. After citing an FBI report finding links between 9/11 and elements of the Saudi government, the ad explains that Saudi Arabia, using a firm Bognet worked for in Washington, lobbied Congress to win immunity from lawsuits brought by victims of the attack. It finishes by linking Bognet to his firm’s lobbying on behalf of Saudi Arabia, driving the point home with a portrait of the hijackers, asking, “If he stood up for them, why would you ever think he’d stand up for you?”

Jim Bognet, a Republican running in Northeast Pennsylvania against Matt Cartwright, was a senior exec at Glover Park Group while they lobbied for Saudi Arabia against JASTA (the 9/11 immunity bill).

House Majority PAC is now hitting him on it in this quite intense attack ad: pic.twitter.com/fq6DQxZtza

Bognet, the first congressional candidate this cycle to receive former President Donald Trump’s endorsement, is running in a rematch in the district that includes President Joe Biden’s hometown of Scranton, a version of which has been represented since 2012 by Rep. Matt Cartwright. Cartwright has managed to hold the seat comfortably while bucking conventional wisdom and embracing broadly populist and progressive politics. He beat Bognet by 4 points in 2020, and he’s a top target of Republicans this cycle.

The extent of Bognet’s income from the firm, Glover Park Group, is unclear thanks to his incomplete financial disclosure filings during his time at the Export-Import Bank in Trump administration. Bognet, according to Lance Matthews, deputy chief ethics officer at the Export-Import Bank, was granted multiple extensions to file his report and then left before having done so. On his way out, he was erroneously told that he didn’t need to file all of his disclosure documents, Matthews said, and as a result no records exist. His disclosure filed as a congressional candidate lists income of $21,000 for the current year and $16,000 for the previous year. His disclosure from his previous run for Congress does not go back far enough to to determine his income from GPG.

Saudi Arabia spent years lobbying against the Justice Against Sponsors of Terrorism Act. Foreign governments are in general immune from lawsuits in U.S. courts, but JASTA proposed amending the law so that families of 9/11 victims could sue Saudi Arabia for its involvement. Former President Barack Obama vetoed the bill when it passed in 2016, but Congress overrode his veto that September. Bognet, according to his résumé, joined GPG in January 2016. The same month the veto was overridden, Saudi Arabia went on a spending spree in Washington, bringing on powerhouse firms to try to reverse the defeat.

GPG acquired Saudi Arabia as a client on September 20, 2016, according to filings, and the veto was overridden on September 28. Federal filings reveal that the group made a slew of calls to the House, Senate, and White House in the week before the veto override, lobbying against it.

The lobbying only accelerated in the wake of the bill’s passage, with filings showing dozens more calls and meetings as the kingdom worked to pass new legislation in the lame-duck session to defang JASTA. On November 30, Sens. Lindsey Graham, R-S.C., and the late John McCain, R-Ariz., finally introduced legislation to weaken it, and records show that GPG was in touch with a key aide to Graham in the days before, on, and after the introduction of the new measure. 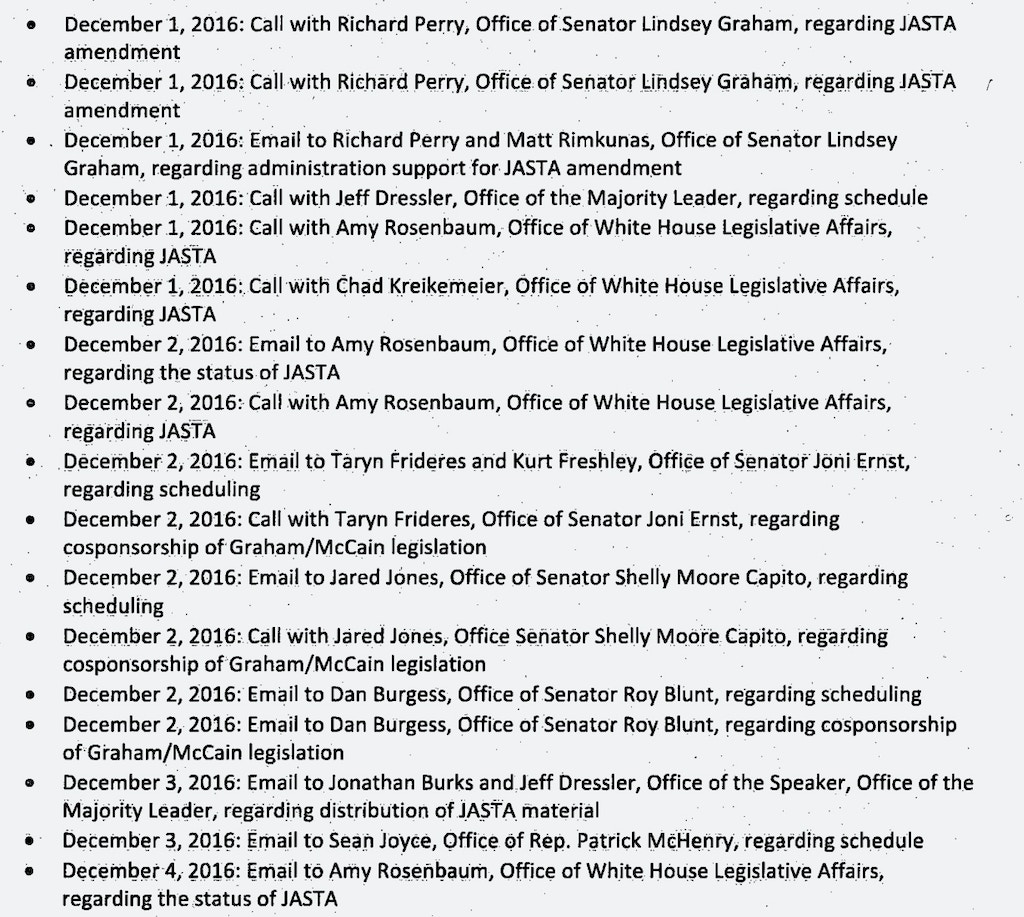 Bognet did not respond to multiple requests for comment from The Intercept over the past month. The press release from 2016 announcing Bognet’s hire reported that he would be “providing strategic and media counsel for the firm’s clients.” Saudi Arabia paid $600,000 for the firm’s services the first year and $700,000 for its help the next year. “It should be completely shocking that a candidate for public office would be willing to sell out the American victims of 9/11 for a foreign government,” said Kunal Atit, Cartwright’s campaign director. “Bognet should be ashamed of himself.”

The television advertising behind Bognet’s campaign has focused heavily on the time he kicked the winning field goal at a high school football game in the ’90s; in one ad, he laments that “memories in Northeast Pennsylvania end too often after high school. People leave and don’t return.”

A follow-up ad also leans into that field goal, finishing with him kicking another one, now in his 40s and having returned to the district. Bognet’s résumé shows that he has indeed been building memories outside Northeastern Pennsylvania since leaving after high school. His journey took him first to Wall Street, where he worked for Merrill Lynch, now branded as the shortened Merrill, on the leveraged-buyout team. A leveraged buyout describes what is commonly known as corporate raiding, in which a group of investors borrows heavily to take over a company, often making their profit through layoffs, union-busting, and pension cuts.

Bognet’s bio on his campaign site now describes him as “a small business owner and conservative policy advisor.” The “small business” Bognet purports to own likely refers to a pair of limited liability companies that Bognet, like many consultants, established for tax and legal purposes: JRB Strategies, based on his initials, and Winning Kick Strategies.

Bognet left GPG in 2018, going on to become campaign CEO of Martha McSally’s failed Senate bid against Kyrsten Sinema in Arizona and then to work for the Export-Import Bank under Trump. He left in 2019.

As for the “conservative” political advice, Trump himself might beg to differ. When Bognet got into politics, he did so for the moderate wing, first working for former California Gov. Arnold Schwarzenegger, then former Massachusetts Gov. Mitt Romney’s 2008 presidential campaign. When Romney lost the Republican nomination to McCain, Bognet joined the McCain campaign. In 2012, he went back to Romney’s campaign.

Trump has made his hostility to Romney and McCain central to his political identity, and Schwarzenegger has spoken publicly about Trump’s threat to civil society and the country as a whole. Bognet, a skilled political communications professional, has spun a background that would typically have disqualified him among a “Make America Great Again” audience into the story of a humble local small business owner.

What Bognet lacks in a MAGA background, he makes up for with his adoption of Trump-like lingo, pledging to “build the wall” and promising to fight China to avenge “the Wuhan flu.” He claims that Democrats rigged the 2020 election in Pennsylvania both against him and against Trump, though voter registration records obtained and posted by national Democrats show that Bognet registered at his parents’ address to be able to vote in the state during the 2010 tea party wave, despite living and working in the Washington, D.C., area at the time. Luzerne County Board of Elections

He lists his most significant success at GPG as a campaign to open up air travel routes to Cuba, made possible by the Obama administration’s thawing of relations with the country — which Trump reversed.
Wait! Before you go on about your day, ask yourself: How likely is it that the story you just read would have been produced by a different news outlet if The Intercept hadn’t done it? Consider what the world of media would look like without The Intercept. Who would hold party elites accountable to the values they proclaim to have? How many covert wars, miscarriages of justice, and dystopian technologies would remain hidden if our reporters weren’t on the beat? The kind of reporting we do is essential to democracy, but it is not easy, cheap, or profitable. The Intercept is an independent nonprofit news outlet. We don’t have ads, so we depend on our members — 35,000 and counting — to help us hold the powerful to account. Joining is simple and doesn’t need to cost a lot: You can become a sustaining member for as little as $3 or $5 a month. That’s all it takes to support the journalism you rely on.Become a Member