It’s all about family values. 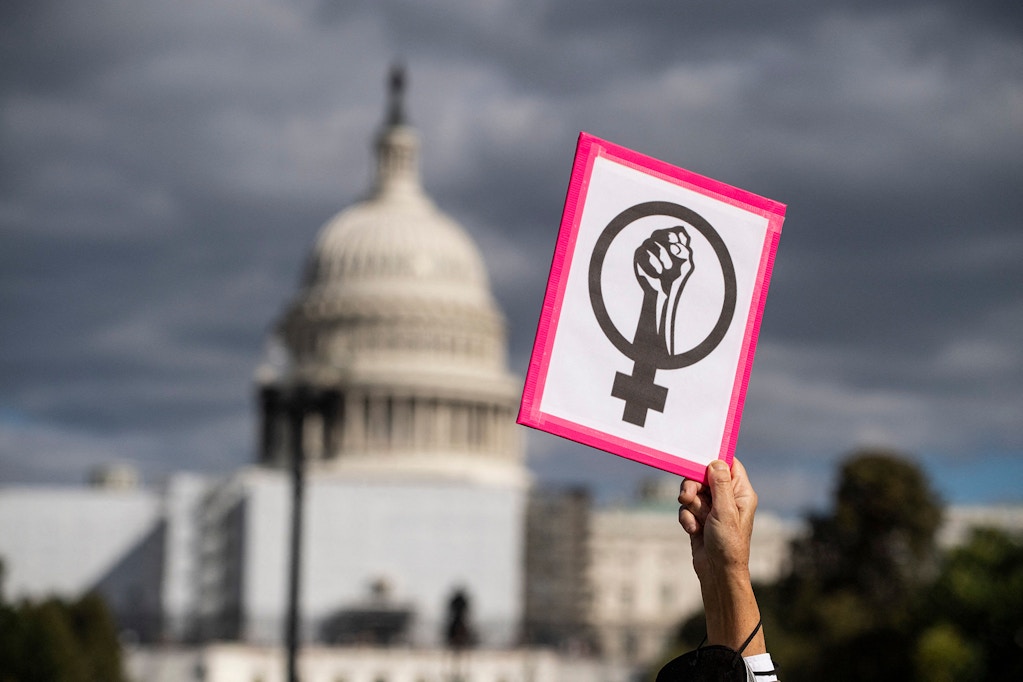 An abortion rights demonstrator holds a sign near the U.S. Capitol during the annual Women’s March in Washington, D.C., on Oct. 8, 2022.

On December 8, President Joe Biden signed the Respect for Marriage Act, which codifies federal protection of same-sex and interracial marriages and requires every state to extend “full faith and credit” to such licenses granted by other states. The bill passed with bipartisan support: 39 Republican representatives and 12 Republican senators joined all the Democrats to vote yea. A USA Today op-ed by Evan Wolfson, leader of the Freedom to Marry campaign, called the Respect for Marriage Act “a triumph for families [and] freedom.”

The impetus for the Respect for Marriage Act was Justice Clarence Thomas’s opinion supporting the majority in Dobbs v. Jackson Women’s Health Organization, which overturned Roe v. Wade. Unsatisfied with trashing the 50-year-old right to abortion, Thomas urged the Supreme Court to revisit — presumably to overturn — “all” the precedents of Roe establishing constitutional protections of personal, intimate decisions. Among these are the rights of married people to use contraception and of same-sex couples to have consensual sex and marry.

Enough lawmakers were alarmed by the potential obliteration of long-established freedoms to rescue at least one. But they could not manage to restore what Dobbs actually obliterated: pregnant people’s human right to bodily autonomy.

A year and a half earlier, just weeks after Texas banned almost all abortions and a national ban loomed, the Women’s Health Protection Act, “to protect a person’s ability to determine whether to continue or end a pregnancy and to protect a health care provider’s ability to provide abortion services,” was rushed out of committee. The bill had 215 co-sponsors, all Democrats, and zero Republican support. It passed the House in September 2021 and faltered in the Senate when three Ds and three Rs ducked out and West Virginia Democrat-in-name-only Joe Manchin voted against the motion to proceed. When the Republican Party takes control of the House in January, the Women’s Health Protection Act will be dormant for the duration.

Why did same-sex marriage sail through Congress with barely a headwind, while reproductive liberty continues to meet typhoons of opposition — or at best, lose momentum and go nowhere?

The reason: While same-sex marriage upholds the family, abortion’s principal job — its superpower — is to free women, and the sex they have, from it. This is an uncomfortable fact for some reproductive rights activists, who try to shoehorn abortion into the conservative arguments that support marriage.

“No union is more profound than marriage, for it embodies the highest ideals of love, fidelity, devotion, sacrifice, and family.” That is not the first line of a sermon delivered in a Southern Baptist megachurch. It is the first finding of the Respect for Marriage Act.

It could also have been the intro to the legislation the RMA repeals, the 1996 Defense of Marriage Act, whose purpose was to define marriage as “a legal union between one man and one woman,” deny federal benefits to marital partners of the same sex, and allow states to refuse to recognize their marriages legalized elsewhere.

Pro-choice propaganda, amicus briefs, and Supreme Court opinions always point out that reproductive self-determination is good for families — that, while most abortion-seekers are young and unmarried, the majority already have children. These pregnancy-terminators, in other words, are family members.

But that argument only goes so far. Evan Wolfson has had it wrong all along: Families and freedom are at odds, and the freedoms that family abridges are almost always women’s and children’s. No wonder marriage is extolled by every patriarchal religion and authoritarian regime. The slogan of Georgia Meloni’s fascist “Brothers of Italy” party, for instance, is “God, Family, Fatherland.”

“Love, fidelity, devotion, sacrifice, and family.” The missing word is sex — and marriage equality proponents do their best to keep it so. When the Vermont legislature held hearings about civil unions — the state’s rehearsal for full-on marriage — lesbian and gay witnesses described their coupled lives: raising kids, playing with the dogs, paying taxes. “Do you want to know what Christopher and I do in bed?” one man asked. “We sleep.” Just like you dried-up old married heterosexuals.

If marriage is (putatively) about devotion to another person, abortion protects other devotions: to art, work, friendship, solitude.

Unlike marriage, abortion cannot divorce itself from sex. After all, a marriage can be sexless, but an unplanned pregnancy cannot. Sex could not give a fuck about the marital virtues on the list. If marriage is (putatively) about devotion to another person, abortion protects other devotions: to art, work, friendship, solitude. If marriage is about sacrifice, abortion repudiates the sacrifice of uterus-bearing people to their reproductive capacity. Love of a child or a partner may come into the decision to end a pregnancy, but in the end, the love enacted in abortion is self-love.

Abortion, moreover, abets personal ambition, which is irrelevant and even antagonistic to happy marriage. Abortion, says the Women’s Health Protection Act, is “central to people’s ability to participate equally in the economic and social life of the United States.” The language echoes Justice Sandra Day O’Connor, writing for the majority in 1992’s Planned Parenthood v. Casey. O’Connor stressed that control over reproduction is also critical to women’s ability to plan families. But in this, perhaps her most-quoted sentence, she was suggesting that would-be mothers have bigger fish to fry. Abortion emancipates them to do it.

While not articulating it, they also both stand by marriage as a handmaiden of capitalism. As Karl Marx and Friedrich Engels wrote, the family produces workers and reproduces labor value for capitalist exploitation. Socialist feminists add that the family (meaning women) performs the unpaid care work that should be the state’s responsibility to support. You don’t have to be a Marxist to sense that the Respect for Marriage Act is a conservative piece of legislation.

By contrast, the Women’s Health Protection Act reads like a feminist manifesto. Restrictions on abortion are “a tool of gender oppression,” paternalistic,” and “rooted in misogyny,” it says. They “perpetuate systems of oppression … white supremacy, and anti-Black racism.” The act promotes reproductive justice: the right not just to end a pregnancy, but also to continue one in health and dignity, and raise children in safe, nourishing, violence-free environments. The WHPA implies that abortion is a tool of liberation, a tool to dismantle the master’s misogynist, white supremacist, racist house.

The Women’s Health Protection Act is not the only radical gender-equality bill that’s been exiled to oblivion. The House passed the federal Equality Act, prohibiting “discrimination on the basis of sex, sexual orientation, or gender identity,” in 2020 and 2021. Nobody bothered to bring it up in 2022, while Republicans campaigned against the very idea of gender identity.

The Equality Act is the child of the Equal Rights Amendment: “Equality of rights under the law shall not be denied or abridged by the United States or by any state on account of sex.” Introduced in 1972 and approved by Congress in 1978, the Equal Rights Amendment fell three states’ ratification short of the 38 required for adoption. Each year it is reintroduced and floats into a black hole.

The trans theorist and activist Paisley Currah argues that the function of the sex/gender system has always been to keep women from getting stuff. But as gender differentiation weakens in work, civic life, families, fashion, sex — and bodies themselves — the categories man, woman, male, and female are losing their salience. Abortion, like legal recognition of trans people, vitiates the power hierarchies seated in biology.

What if potential gestators (as feminist theorist Sophie Lewis calls the carriers of fetuses, regardless of their nominal gender) had the freedom to deploy and enjoy their bodies as they wished? Would they muster Amazon armies and storm the patriarchy? Would they abandon domestic and reproductive labor and retire to their bedrooms with vibrators in hand? Would they never marry again? And if the law gives bodily autonomy to pregnant people, who else will demand it?