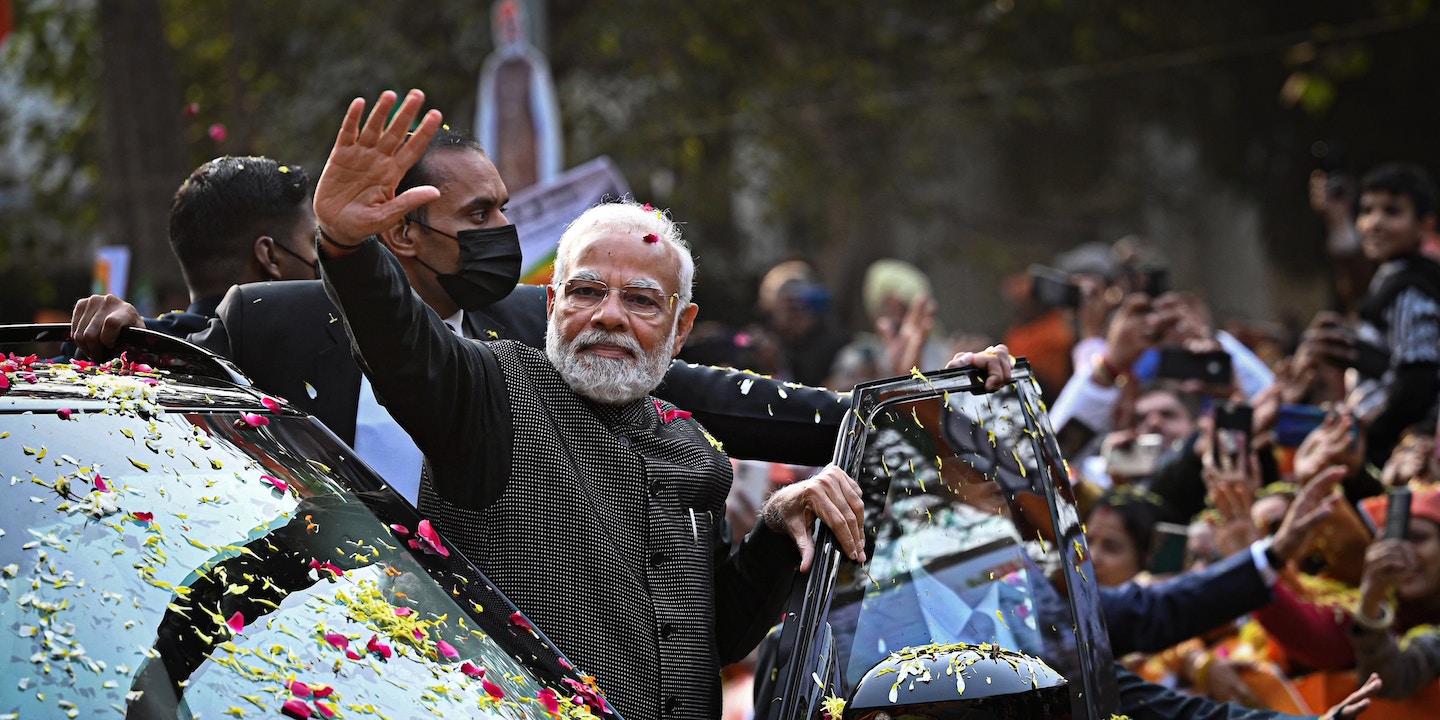 Twitter and YouTube censored a report critical of Indian Prime Minister Narendra Modi in coordination with the government of India, according to a top Indian official. Officials called for the Big Tech companies to take action against a BBC documentary exploring Modi’s role in a genocidal 2002 massacre in the Indian state of Gujarat, which the officials deemed a “propaganda piece.”

In a series of posts, Kanchan Gupta, senior adviser at the Indian government’s Ministry of Information and Broadcasting, denounced the BBC documentary as “hostile propaganda and anti-India garbage.” He said that both Twitter and YouTube had been ordered to block links to the film, before adding that the platforms “have complied with the directions.” Gupta’s statements coincided with posts from Twitter users in India who claimed to have shared links to the documentary but whose posts were later removed and replaced with a legal notice.

“The government has sent hundreds of requests to different social media platforms, especially YouTube and Twitter, to take down the posts that share snippets or links to the documentary,” Indian journalist Raqib Hameed Naik told The Intercept. “And shamefully, the companies are complying with their demands and have taken down numerous videos and posts.”

“The government has sent hundreds of requests to different social media platforms, especially YouTube and Twitter, to take down the posts that share snippets or links to the documentary.”

This act of censorship — wiping away allegations of crimes against humanity committed by a foreign leader — sets a worrying tone for Twitter, especially in light of its new management.

Elon Musk’s self-identification as a “free-speech absolutist” has been a primary talking point for the billionaire as he has sought to explain why he took ownership of the platform last year. Much of his criticism of Twitter revolved around its decision to censor reporting around Hunter Biden, the son of then-presidential candidate Joe Biden.

While Musk has been glad to stand up to suppression of speech against conservatives in the United States — something that he has described as nothing less than “a battle for the future of civilization” — he appears to be failing at the far graver challenge of standing up to the authoritarian demands of foreign governments.

After publication of this story, Musk, who helms Twitter’s communications efforts himself, tweeted a response. “First I’ve heard,” Musk wrote. “It is not possible for me to fix every aspect of Twitter worldwide overnight, while still running Tesla and SpaceX, among other things.”

YouTube spokesperson Jack Malon told The Intercept that the BBC documentary had been removed from the platform because of a copyright claim by the BBC, but declined to comment on takedown demands from the Indian government.

Pushing back against censorship of the BBC documentary, members of Parliament from the opposition All India Trinamool Congress party Mahua Moitra and Derek O’Brien defiantly posted links to it online.

“Sorry, Haven’t been elected to represent world’s largest democracy to accept censorship,” Moitra posted. “Here’s the link. Watch it while you can.” Moitra’s post is still up, but the link to the documentary no longer works. Moitra had posted a link to the Internet Archive, presumably hoping to get around the block of the BBC, but the Internet Archive subsequently took the link down. She has since posted the audio version on Telegram.

CENSORSHIP@Twitter @TwitterIndia HAS TAKEN DOWN MY TWEET of the #BBCDocumentary, it received lakhs of views

Twitter even blocked Indian audiences from seeing two posts by actor John Cusack linking to the documentary. (They remain visible to American audiences.) Cusack said he “pushed out the links and got immediate blowback.” He told The Intercept, “I received two notices that I’m banned in India.” The actor wrote a book, “Things That Can and Cannot Be Said,” with celebrated Indian scholar Arundhati Roy, a fierce critic of the Modi government.

The Gujarat riots, as the violence is sometimes known, occurred in 2002, when Modi was the chief minister of the state. A group of militants aligned with the Hindu nationalist movement, which encompasses Modi’s Bharatiya Janata Party, launched a violent campaign against local Muslims. Modi, who has been accused of personally encouraging the violence, reportedly told police forces to stand down in the face of the ongoing violence, which killed about 1,000 people.

“The documentary has unnerved Mr. Modi as he continues to evade accountability for his complicity in the violence,” Naik, the journalist, said. “He sees the documentary as a threat to his image internationally and has launched an unprecedented crackdown in India.”

Modi’s government in India regularly applied pressure to Twitter in an attempt to bend the social media platform to its will. At one point, the government threatened to arrest Twitter staff in the country over their refusal to ban accounts run by critics.

When Musk took over, Twitter had just a 20 percent compliance rate when it came to Indian government takedown requests. When the billionaire took the company private, some 90 percent of Twitter India’s 200 staffers were laid off. Now, the Indian government’s pressure on Twitter appears to be gaining traction.

A key difference may be Musk’s other business entanglements. Musk himself has his own business interests in India, where Tesla has been lobbying, so far without luck, to win tax breaks to enter the Indian market.

Whatever the reason for the apparent change, Twitter’s moves at the behest of Modi’s government bode ill for Musk’s claims to be running the company with an aim of protecting free speech. While Musk has felt fine wading into U.S. culture wars on behalf of conservatives, he has been far more reticent to take a stand about the far direr threats to free speech from autocratic governments.

One of the initial strengths of Twitter, and social media broadly, was the threat it posed to autocratic governments, as witnessed by its use during the 2009 protests in Iran and later the Arab Spring. Dictators across the region railed at the company for allowing what they considered to be forbidden speech.

Musk, however, has said he defers to local laws on speech issues. “Like I said, my preference is to hew close to the laws of countries in which Twitter operates,” Musk tweeted last year. “If the citizens want something banned, then pass a law to do so, otherwise it should be allowed.”

Google, which owns YouTube, has also come under intense pressure from the Indian government. The company’s public transparency reports show the Indian government has been a prodigious source of content takedowns, sending over 15,000 censorship demands since 2011, compared to under 5,000 from Germany and nearly 11,000 from the U.S. in the same time frame.

These reports show a varying level of compliance on Google’s part: Between January and June 2022, Google censored nearly 9 percent of items submitted by the Indian government but almost 44 percent during that span in 2020. YouTube did not immediately respond to a request for comment.

Akshay Marathe, a former spokesperson for the opposition party in control of the Delhi and Punjab government, told The Intercept that the social media takedown requests were part of a broader program of suppression. Modi “quite brazenly used India’s law enforcement apparatus to jail political opponents, journalists, and activists on a regular basis,” Marathe said. “His directive to Twitter to take down all links of the documentary (and Twitter’s shocking compliance after Elon’s commitment to free speech) also follows on the heels of the Modi government’s announcement that it will soon implement a regulatory regime in which it will have the right to determine what is fake news and order Big Tech platforms to delete the content.”

Update: January 25, 2023
This story has been updated to include a response tweeted by Elon Musk after the story’s publication as well as a statement from YouTube sent after publication.