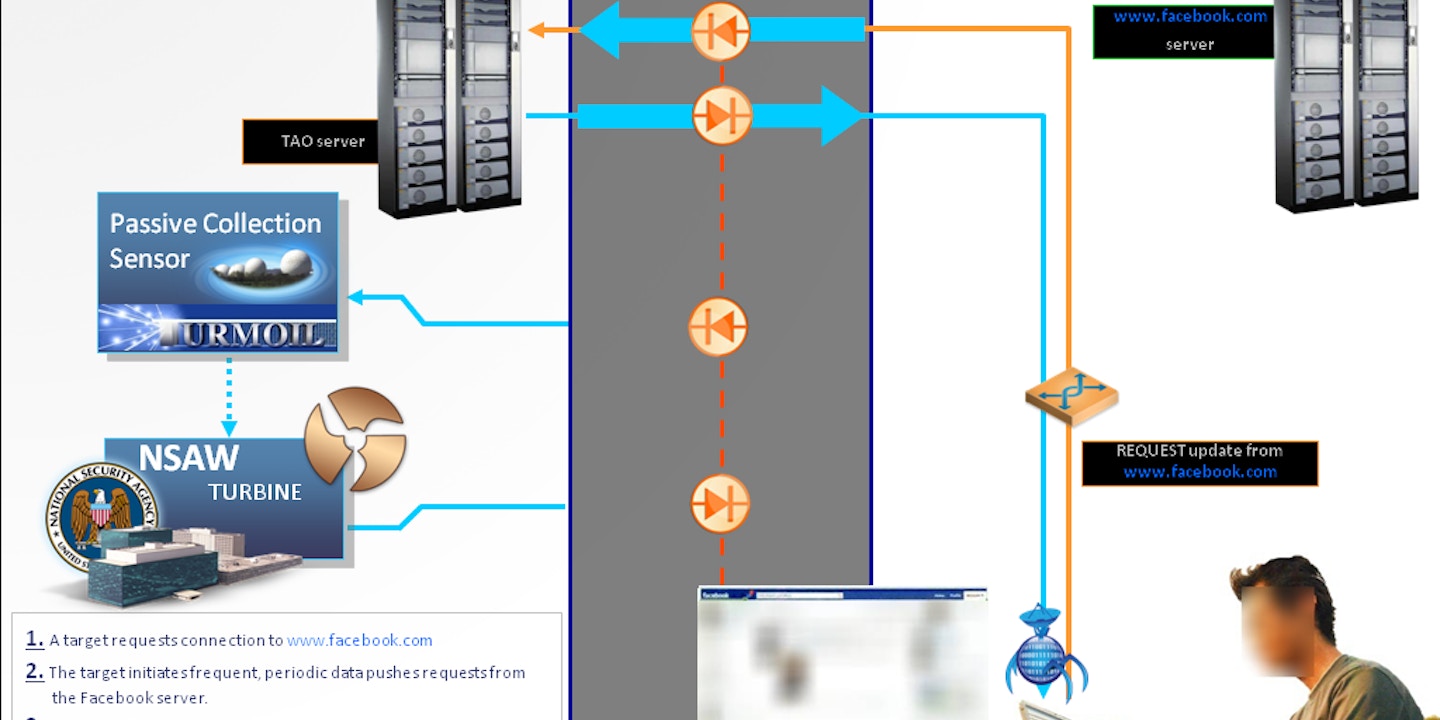 On Wednesday, Glenn Greenwald and I revealed new details about the National Security Agency’s efforts to radically expand its ability to hack into computers and networks across the world. The story has received a lot of attention, and one detail in particular has sparked controversy: specifically, that the NSA secretly pretended to be a Facebook server in order to covertly infect targets with malware “implants” used for surveillance.

This revelation apparently infuriated Facebook founder Mark Zuckerberg so much that he got on the phone to President Barack Obama to complain about it. “I’ve been so confused and frustrated by the repeated reports of the behavior of the US government,” Zuckerberg wrote in a blog post Thursday. “When our engineers work tirelessly to improve security, we imagine we’re protecting you against criminals, not our own government.”

That wasn’t all. Wired ran a piece saying that the NSA’s widespread use of its malware tools “acts as implicit permission to others, both nation-state and criminal.” Slate noted that the NSA’s hacking platform appears to be “becoming a bit more like the un-targeted dragnets everyone has been so upset about.” Meanwhile, Ars Technica wrote that the surveillance technology we exposed “poses a risk to the entire Internet.”

In response, the NSA has attempted to quell the backlash by putting out a public statement dismissing what it called “inaccurate” media reports. The agency denied that it was “impersonating U.S. social media or other websites” and said that it had not “infected millions of computers around the world with malware.” The statement follows a trend that has repeatedly been seen in the aftermath of major disclosures from documents turned over by NSA whistleblower Edward Snowden, in which the NSA or one of its implicated allies issues a carefully worded non-denial denial that on the face of it seems to refute an allegation but on closer inspection does not refute it at all.

Prior to publishing our story, we asked the NSA to explain its use of Facebook to deploy malware as part of a top-secret initiative codenamed QUANTUMHAND. The NSA declined to answer all of our questions or offer context for the documents. We went into meticulous detail in our report, which went through a rigorous fact-checking process because of the gravity of the revelations. What we reported, accurately, was that the Snowden files showed how the agency had in some cases “masqueraded as a fake Facebook server, using the social media site as a launching pad to infect a target’s computer and exfiltrate files from a hard drive.” The source for that detail was not plucked from thin air; it was rooted in multiple documents that refer to the technique in action, including the internal NSA animation that we published.

A particular short excerpt from one of the classified documents, however, has taken on new significance due to the NSA’s statement. The excerpt is worth drawing attention to here because of the clarity of the language it uses about the Facebook tactic and the light it shines on the NSA’s denial. Referencing the NSA’s Quantum malware initiative, the document, dated April 2011, explains how the NSA “pretends” to be Facebook servers to deploy its surveillance “implants” on target’s computers:

It is difficult to square the NSA secretly saying that it “pretends to be the Facebook server” while publicly claiming that it “does not use its technical capabilities to impersonate U.S. company websites.” Is the agency making a devious and unstated distinction in its denial between “websites” and “servers”? Was it deliberate that the agency used the present tense “does not” in its denial as opposed to the past tense “did not”? Has the Facebook QUANTUMHAND technique been shut down since our report? Either way, the language used in the NSA’s public statement seems highly misleading – which is why several tech writers have rightly treated it with skepticism.

The same is true of the NSA’s denial that it has not “infected millions of computers around the world with malware” as part of its hacking efforts. Our report never actually accused the NSA of having achieved that milestone. Again, we reported exactly what the NSA’s own documents say: that the NSA is working to “aggressively scale” its computer hacking missions and has built a system called TURBINE that it explicitly states will “allow the current implant network to scale to large size (millions of implants).” Only a decade ago, the number of implants deployed by the NSA was in the hundreds, according to the Snowden files. But the agency now reportedly manages a network of between 85,000 and 100,000 implants in computers systems worldwide – and, if TURBINE’s capabilities and the NSA’s own documents are anything to go by, it is intent on substantially increasing those numbers.

The rapid proliferation of these hacking techniques in the past decade, under cover of intense secrecy, is extraordinary and unprecedented. The NSA insists in its denial that its hacking efforts are not “indiscriminate.” Yet how the agency defines “indiscriminate” in this context remains unclear. The Intercept asked the NSA to clarify some of these issues for this post. Does the agency deny that it has used the QUANTUMHAND method to pretend to be a Facebook server in order to deploy malware implants? How does the NSA distinguish “indiscriminate” from “discriminate”? In what specific legal, policy, and operational context does the implants system function? The agency declined to answer all of these questions. Instead, spokeswoman Vanee’ Vines said that the NSA stood by its original statement, adding only that “unauthorized and selective publication” of the documents “may lead to incorrect assumptions.”

The NSA’s outgoing chief has claimed that the agency supports increased transparency in the wake of the Snowden leaks – but its response to the latest disclosures illustrates that it is failing to live up to that commitment. If the NSA truly wants to gain citizens’ trust, it should rethink its slippery public relations strategy. A good first step would be to stop issuing dubious denials that seem to sit so starkly at odds with what its officials were saying in secret when they thought nobody would ever learn about what they were doing.