Photographs and video of heavily armed police officers arresting protesters in Baton Rouge over the weekend reverberated on social networks around the world. 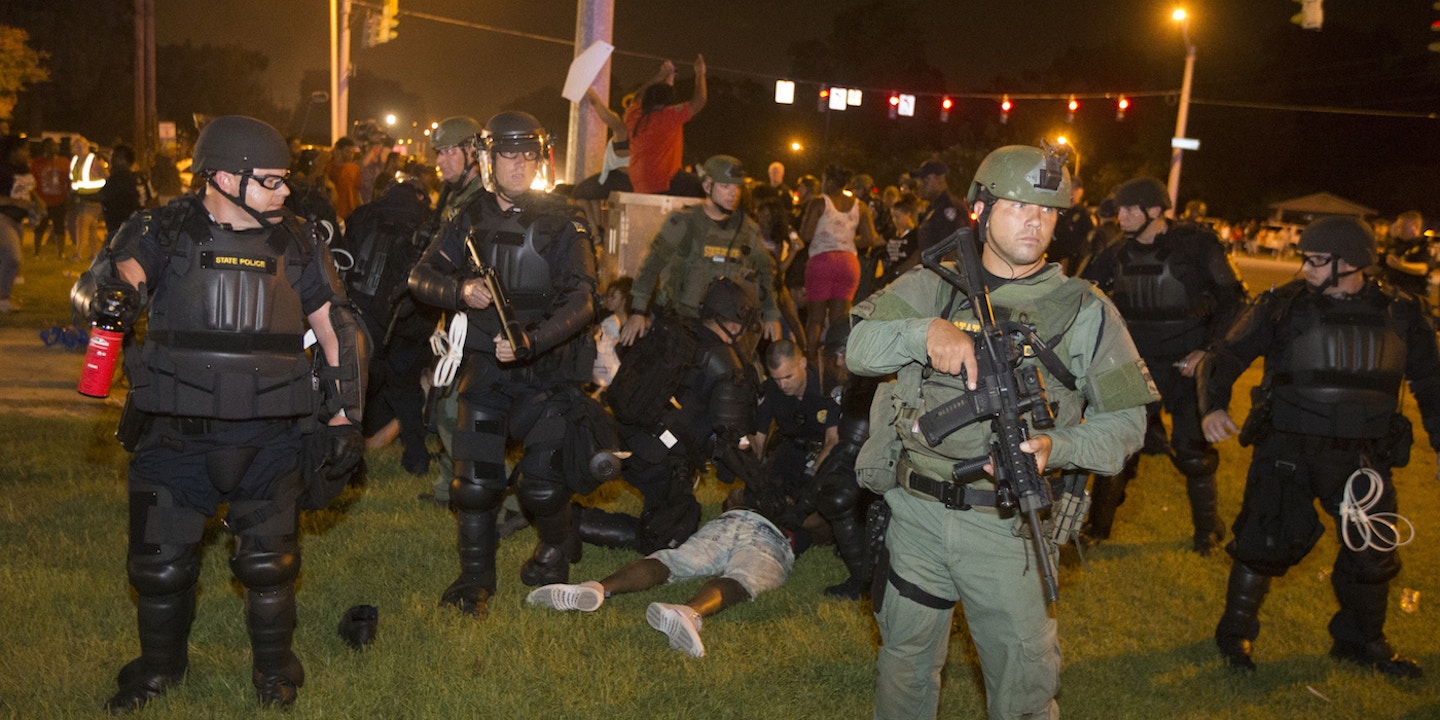 Photographs and video of heavily armed police officers wearing body armor and helmets arresting protesters in Baton Rouge over the weekend reverberated on social networks and in the world’s media, focusing new attention on the militarization of police forces across the United States.

The image that drew the most comment, taken by Jonathan Bachman for Reuters, showed a young woman in a dress standing serenely on a road outside the Baton Rouge police headquarters as two Louisiana State Police officers dressed for battle rushed to arrest her. Ieshia Evans, a nurse from Brooklyn, was arrested on Saturday outside the Baton Rouge Police Department during a protest against the killing of Alton Sterling.

The woman was later identified as Ieshia Evans, a nurse and mother from Brooklyn, who had come to protest the killing of Alton Sterling by two Baton Rouge police officers last week.

Baton Rouge PD looks ridiculous. I never wore so much armor in combat. This is their own community. (Photo: Reuters) pic.twitter.com/clCFFyD6jx

This Reuters pic of a serene protestor in Baton Rouge brings to mind the Tank-Man in Tiananmen Square. pic.twitter.com/i8SES79Kco

When you see this image you think thank God America won the Cold War and defeated tyranny
(JONATHAN BACHMAN/REUTERS) pic.twitter.com/ryVd3lGqIw

Evans, who was released on Sunday, wrote on Facebook that she had no desire to speak to the media until she could get home to her young son. “I appreciate the well wishes and love, but this is the work of God,” she added. “I am a vessel!”

She was one of 102 protesters arrested on Saturday night outside the police station on Airline Highway. Another of those detained and held overnight was DeRay Mckesson, a prominent Black Lives Matter activist, who was live-streaming video from the shoulder of the road when he was tackled by an officer.

.@deray was live streaming on #Periscope when he got arrested. Go to 4:00 https://t.co/q5JeQbPafJ

Another photograph taken by Bachman, showing a police officer’s knee pinning an African-American protester’s head to the pavement, struck a chord with photo editors in Iran and Russia, where the crackdown on peaceful protesters made complaints from the United States government about repression of dissent in those countries seem hypocritical.

Jonathan Bachman of Reuters made another iconic photo from the Baton Rouge protests: pic.twitter.com/HHthNvfnV4

This is Iran's most conservative paper on violence in the US. (not sure where the pic is from) pic.twitter.com/CHo6bQ7Su4

There were more arrests on Sunday, and more images of what looked like a clear mismatch between the threat of violence from protesters and the aggressive use of force by police officers confronting them.

Two young white woman arrested after they refused to move from in front of police vehicle. pic.twitter.com/o36kWamjsD

As the Baton Rouge Advocate reported, a demonstration in a residential neighborhood of the city on Sunday only got more heated when about 300 marchers were blocked by officers wearing gas masks and driving an armored vehicle with an ear-splitting sound cannon called an LRAD, or long-range acoustic device.

As the standoff got more tense, the protesters screamed, “They’re going to gas us,” and “Put down your guns,” video recorded at the scene showed.

Eventually, there was a spate of forcible arrests, even of protesters who had retreated from the streets onto sidewalks and, in one case, into the front yard of a woman who tried to shelter them.

After 50 demonstrators were taken away, Lisa Batiste, the woman whose front yard was raided by the police, told the CBS News correspondent David Begnaud she was shocked and disappointed by the behavior of the police.

Baton Rouge home owner "very upset" after police storm her yard arresting protesters who had permission to be there pic.twitter.com/gwE8aRGKfL

“It was extremely unnerving — the military-style policing,” Batiste told The Advocate later. “I just wanted them to have a safe place to voice their opinions.”

This isn't Baghdad. It's #BatonRouge.

State Police Superintendent Mike Edmonson later blamed the protesters, telling the New Orleans Times-Picayune that when ordered to disperse, “They seemed to have no intention of doing so in a peaceful manner.” Some of those who fled the scene then tossed lumps of concrete at his officers, he added.

“The bottom line is, this group was certainly not about a peaceful protest, because they could’ve easily left on their own,” Edmonson said.

He also called their anti-police chants a form of incitement. “The whole time when you sat there listening to them, their words were not conducive to a peaceful-type demonstration,” he said.

Marjorie Esman, the director of the American Civil Liberties Union in Louisiana, condemned the arrests as unlawful in a statement:

The Baton Rouge police used violent, militarized tactics on groups of people who have gathered peacefully in protest of Alton Sterling’s killing. We were on the scene and witnessed police in full riot gear with assault rifles while individuals were exercising their lawful rights and posed no threat. The police lunged and grabbed at peacefully assembled people and threw them to the ground. Such misconduct violates the constitution and is serving to escalate an environment already filled with tension.

The ACLU stands with the protesters in Baton Rouge and urges the police to honor our constitutional rights instead of stomping on them.

There were similar images of the apparent use of excessive force against Black Lives Matter protesters in other parts of the country. The arrest of one young woman late Friday in Rochester, New York, as she was giving an interview to a local news station, also drew widespread condemnation.

She literally did nothing pic.twitter.com/qaKrEB1X3y

The journalist who filmed that arrest, Tara Grimes of TWC News Rochester, reported later that the police said dozens of protesters were arrested after unacceptable “verbal confrontations” between officers and demonstrators. Grimes also shared video of that protester scolding a line of officers in riot gear just before she was arrested.

This is needed to clarify previous video. This is what happened before the woman was arrested while we spoke w/ her pic.twitter.com/BRoOQzd4Xd