A self-appointed stock sleuth finds financial giants trading extensively in little penny stocks like the one he owned that tanked. And he learns something amazing: Some brokers can sell shares that don’t actually exist.

Chris DiIorio had lost a million dollars when the penny stock he was betting on shed 98 percent of its value in a matter of weeks. But when he looked deeper, he found this wasn’t a typical penny stock pump-and-dump scheme. He was determined to get to the bottom of it.

For one thing, there were two huge companies involved. UBS, one of the world’s largest private banks, seemed to have no business trading in penny stocks. “This was a $50 billion-plus bank, it didn’t seem like penny stocks would move the needle,” DiIorio said. But just in December 2011, UBS’s trades in 32 penny stocks represented over half of the firm’s total share volume, according to his calculations.

In a one-line response to a series of detailed questions from The Intercept, UBS media relations director Peter Stack wrote in an email: “UBS applies strict due diligence and anti-money-laundering standards to all its business.”

After some research, DiIorio became even more disturbed by the presence of the other company, Knight Capital, which has traded an average of more than 2 billion shares of penny stocks daily for the past three years.

Based in Jersey City, N.J., Knight is what is called a “market maker,” a dealer that facilitates trading by actually holding shares itself, if ever so briefly, so investors can buy and sell without any delay. “They’re selling the service of convenience to investors, like a car dealer makes it easier to buy or sell a car quickly,” said Jim Angel, an associate professor specializing in market structure at Georgetown University.

Knight Capital is a giant in the field; it alone was responsible for 11 percent of all trading in U.S. stocks by volume as of 2012. It’s known in particular for speed. The ability to jump in and out of stocks quickly through electronic markets is attractive to customers and enables Knight to trade nearly $30 billion every single day. “Market making is a business where the spreads are small but the volumes are large,” Angel said. The spread is the difference between the buy price and the sell price, and it’s how Knight makes money.

DiIorio looked closely at how Knight operated. He determined that between 80 and 90 percent of its share volumes came from penny and fractional penny stocks. According to DiIorio’s calculations, Knight traded over 10 trillion shares of OTC and Pink Sheets securities from 2004 to 2012.

This level of volume persists — the most recent statistics show that 73 percent of the company’s equity share volumes in August 2016 came from penny stocks, and 81 percent as recently as May.

A share in a penny stock is worth magnitudes less than a share in Google or Apple. But the spreads — where the market makers cash in — are proportionately bigger on a penny stock. For example, if the market maker earns a penny per share of a $50 stock, that’s only a spread of .02 percent. But a stock worth 25 cents where a market maker sees even a tenth of a penny in profit represents a spread of 2 percent — a 100-fold increase.

Still, DiIorio wondered how much volume a broker would need to make any money through penny stock trading. “You would have to move hundreds of millions of shares per trade,” he said.

And, because his personal investigation had started after his shares in a company called Best Rate Travel tanked precipitously, he also wondered: Why was Knight so involved with them in particular?

While DiIorio was mulling that, he started talking to his fellow traders and reading rumors online from owners of dozens of small companies who blamed the rapid destruction of their penny stocks on a practice known as naked short selling.

Let’s take that step by step. A short sale, generally speaking, is a bet that a stock price will drop over time. Typically, short sellers borrow shares of a stock from a broker and sell them on the open market, hoping to buy them back at a cheaper price in the future and make money on the exchange. This can become a self-fulfilling prophecy, if done right. Short selling can cause a market panic, and the prices drop in the frenzy. 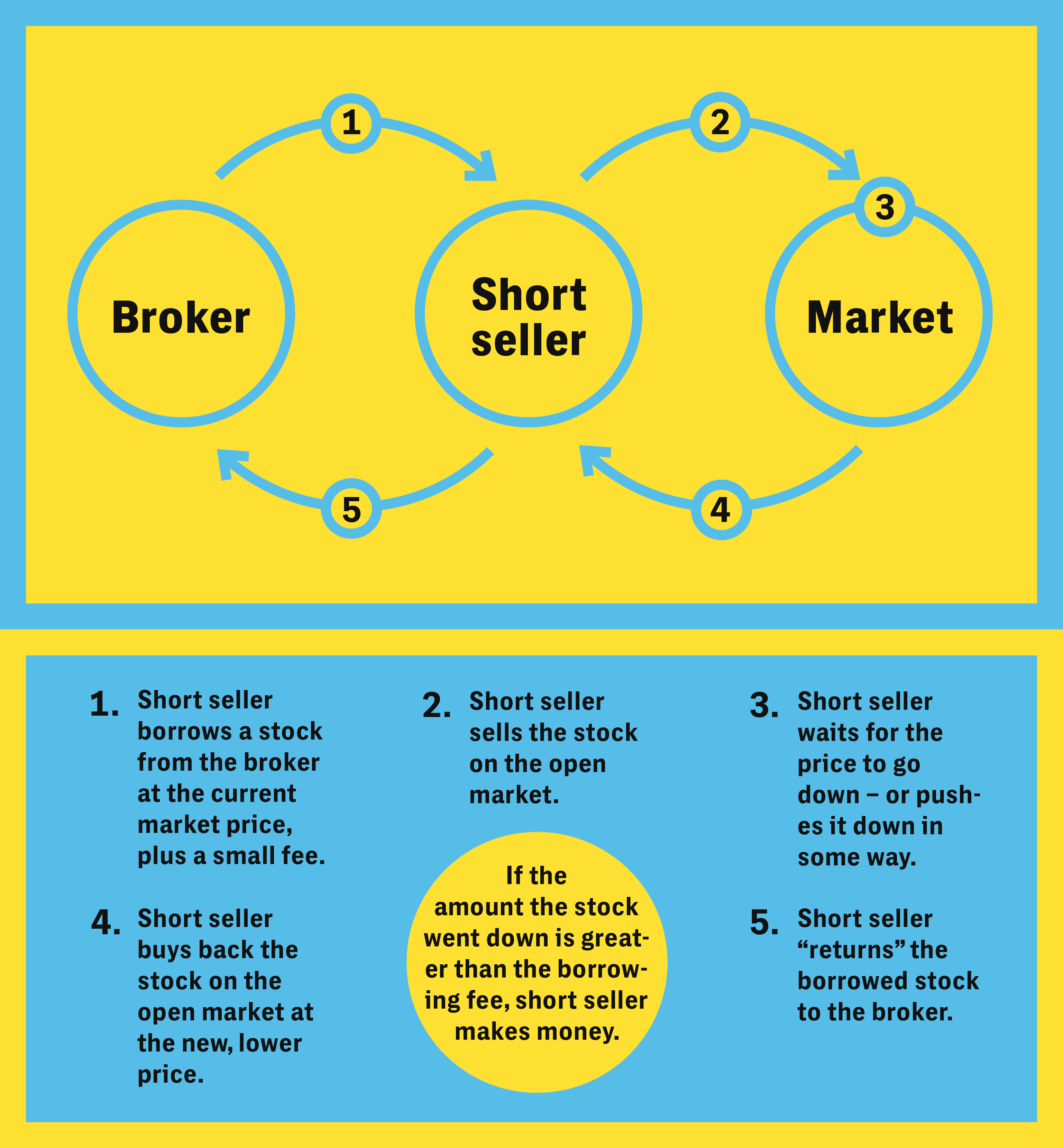 How to short a stock.

But in naked short selling, you don’t even borrow the stock. You sell additional, phantom shares. This is even more likely to drive down the price than regular shorting, because suddenly the supply is larger but the demand is the same. “I can think of a number of stocks where the shares on the short exceeded the shares ever issued by the company,” said Alabama Securities Commission Director Joseph Borg. “You can’t do that unless it’s naked.”

Naked short selling is, not surprisingly, illegal in most circumstances.

But market makers like Knight have an exemption from naked short selling restrictions, on the grounds that they use the practice to maintain liquidity in markets. For example, if there’s high demand for a stock, the market maker can fill orders even if it doesn’t have the shares available.

As the Securities and Exchange Commission explains, “A market maker engaged in bona fide market making, particularly in a fast-moving market, may need to sell the security short without having arranged to borrow shares.” This often occurs in thinly traded stocks, like penny stocks.

DiIorio reasoned that naked short selling would explain where all the trades were coming from on Best Rate Travel; while he and his counterparts were locked into their investments for a year after the company’s merger, maybe someone was flooding the market with shares and battering the stock with ease.

At this point, DiIorio had no evidence that Knight did anything but facilitate trades. But he began to suspect that Knight somehow used naked short selling for its own devices. DiIorio’s attempts to get some explanations from Knight were brushed off — as were The Intercept’s during the reporting of this series.

Did Knight manipulate the stock price of Best Rate Travel, costing DiIorio and other investors millions? If so, why? Who benefited? Who needed this obscure, tiny penny stock to tank?