The requests for help raise a whole new series of conflict-of-interest concerns about Tillerson, who retired as Exxon Mobil CEO soon after being nominated to be the next secretary of state. 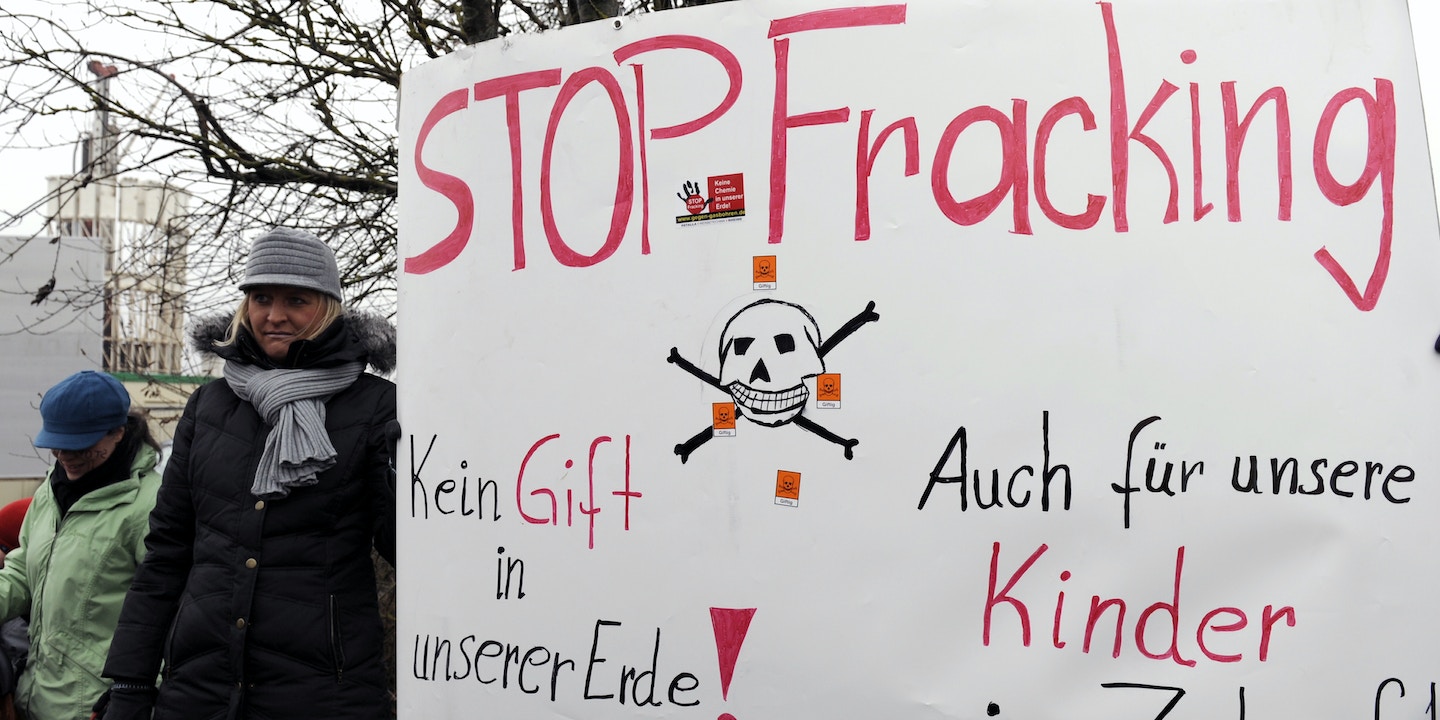 Exxon Mobil under its CEO Rex Tillerson frequently pressed the U.S. State Department for help in negotiating complex business deals and overcoming foreign opposition to its drilling projects, according to documents reviewed by The Intercept.

The requests for help — documented in diplomatic cables obtained through a Freedom of Information Act request from DeSmogBlog as well as some previously released by Wikileaks — raise a whole new series of conflict-of-interest concerns about Tillerson, who retired as Exxon Mobil CEO soon after being nominated by President-elect Donald Trump to be the next secretary of state.

Consider: Exxon Mobil sent State Department officials a request to help overcome local opposition to fracking in Germany; in Indonesia, the State Department acted as a advocate for Exxon Mobil during contentious negotiations between the firm and the Indonesian government over a major gas field in the South China Sea; and in Russia, Exxon Mobil asked the U.S. ambassador to press the Russians to approve a major drilling program, noting that a “warming of U.S.-Russian relations” overall would also help the company.

Under the leadership of Hillary Clinton, the State Department started its own in-house energy promotion department, the Bureau of Energy Resources. The team works on a variety of energy projects, but its most high-profile programs have been focused on spurring the worldwide spread of hydraulic fracturing (“fracking”) technology, with the hope that doing so would blunt the influence of certain foreign powers. The Bureau’s Unconventional Gas Technical Engagement Program (formerly the Global Shale Gas Initiative) has in the past engaged with Exxon Mobil for projects in Poland and eastern Europe.

“In theory,” said Stephen Kretzmann, the executive director of Oil Change International, “the U.S. State Department is supposed to promote American values and human rights around the world, but in practice that often comes into conflict with an agenda to ensure access for American firms to new markets and reserves.”

In reality, said Dan Beeton, international communications director at the Center for Economic and Policy Research,”generally, the U.S. promotes ‘stability’ abroad, rather than democracy or human rights — stability that benefits U.S. businesses.” 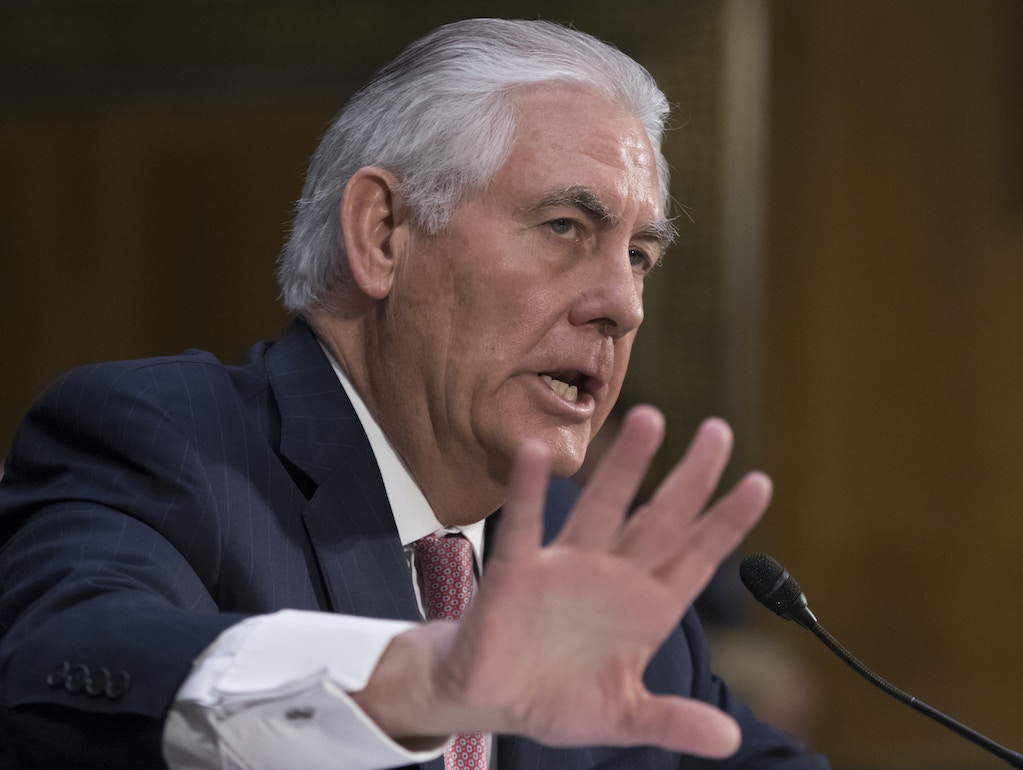 Secretary of State-designate Rex Tillerson testifies on Capitol Hill in Washington, Wednesday, Jan. 11, 2017, at his confirmation hearing before the Senate Foreign Relations Committee.

In a cable sent on August 26, 2011, titled “ExxonMobil Request USG Help on Shale Gas Investment,” a State Department official noted that “shale gas development in Germany appears to be grinding to a halt in response to a vigorous campaign by the environmental lobby.”

Popular opposition to fracking was widespread in Germany at the time. A 2014 paper by German academics titled, “‘ExxonMobil in Europe’s Shale Gas Fields: Quitting Early or Fighting It Out?” described Exxon Mobil as the “most prominent target for environmental groups and new grassroots initiatives.” That paper also detailed how the company launched an expensive full-fledged public relations and advertising campaign in the attempt to win public trust. Berlin’s national daily newspaper Tageszeitung denounced Exxon’s actions as creating a “pseudo-dialogue” which was both “cosmetic” and “manipulative.”

The State Department cable explained it this way: “Exxon Mobil is meeting with opposition groups as part of its own education campaign, but would like the USG to make a direct appeal to the German government in hopes of breaking the logjam.”

Exxon Mobil, the memo also noted, had recommended an “action plan” that included reports on the benefits of shale gas, guest speakers coming to Germany from U.S. government agencies, and a formal lobbying appeal to German officials.

Whether State acted upon the recommendations is unclear; the foreign service officer who authored the memo, now retired, did not respond to a request for comment. Several other diplomatic cables referencing the State Department’s involvement in Germany during this period are heavily redacted. Exxon Mobil was ultimately stymied, however: the German government banning fracking in June 2016.

“The behavior of Exxon Mobil in Germany shows pretty clearly that the global oil and gas industry tries at the moment everything it can do to torpedo the necessary efforts towards a much needed energy transition,” said Andy Gheorghiu, a policy advisor for Food and Water Europe.

A February 2009 cable published by Wikileaks shows Exxon Mobil asking then-U.S. Ambassador to Russia John Beyrle to intervene on its behalf and speak to the Russian government about its then-stalled offshore drilling project in  a major oil and gas field to the east of Russia called Sakhalin.

“Exxon Mobil [officials] told the Ambassador on January 31 that GOR [Government of Russia] refusal to approve project budgets has halted development of new Sakhalin 1 fields,” reads the cable. Kremlin officials, perhaps motivated by anti-American sentiment, were blocking approval of a budget needed to move forward with the project until a Russian entity took control of 51 percent of the deal.

Exxon Mobil officials hoped that the incoming Obama administration could persuade the Russians to change course on the project. The president of Exxon Mobil’s Russian operation and its Sakhalin project manager “told the Ambassador they believed a warming of U.S.-Russian relations could help reverse the refusal to approve the Sakhalin 1 budget,” and “asked the Ambassador for USG support in pressing the GOR to act on the matter. ”

In May 2009, the Sakhalin 1 consortium agreed to sell 20 percent of the gas extracted from the field to Russia’s state-owned company Gazprom, and production continued.

One 2007 cable noted that Russian-based executives of Exxon Mobil and other U.S. firms met with Under Secretary of State Reuben Jeffery III in Moscow and argued that “the best way to engage Russia and enhance global energy security is to focus on positive dialogue geared towards helping Russia improve its oil and gas investment climate.” Russia, the oil firms noted, “is about to embark on a new era of oil and gas development in areas (East Siberia and Arctic regions) that cannot be exploited without Western technologies and expertise.”

Tillerson’s ties to Russia — which center around the joint venture he signed in 2011 as the CEO of Exxon Mobil with Russian state-owned company Rosneft to drill for oil on the Arctic shelf — have been a source of controversy. After the signing, Tillerson was presented with an “Order of Friendship” award from Russian President Vladimir Putin.

In 2007, during a dispute over the Natuna gas fields in the South China Sea, the State Department relayed Exxon Mobil’s concerns to the Indonesian government about the government’s attempts to change the terms of previous agreement between Exxon Mobil and the Indonesia state-owned company Pertamina. The new Indonesian demands, as described in a diplomatic cable about “resource nationalism” in the country, included more favorable financial terms for the Indonesians, as well as giving “Pertamina personnel the skills and knowledge to function as a real exploration and production company.”

After Pascoe relayed Exxon Mobil’s issues with Indonesia’s demands, Kalla replied that the firm had three months to come to “acceptable terms or else the bloc would be put out for a new public tender.” Kalla also noted that he had discussed the issue with then-Secretary of State Colin Powell, making the case that “in order for democracy to work in developing countries, they had to have economic opportunities or else they would go backwards.”

The cable continues: “The Ambassador replied that changing agreements signaled risks for outside investors. Kalla rejoined that politically it was impossible to back the original contract: opponents of the government would call to support a future radical president, citing the success of Presidents Chavez in Venezuela or Morales in Bolivia. If the current agreement were implemented the GOI would be open to charges that they allowed a ‘bad’ U.S. company to cheat Indonesia of its wealth. How could the government respond? A response in favor of the U.S. firm could be much more costly down the line. The Ambassador replied that foreign businessmen looked to Kalla to understand the important role that business plays in society. There had been previous cases from a few years ago of businesses subject to arbitrary actions and that Indonesia’s reputation needs still to recover from such events.”

In the following years, Pertamina and Exxon Mobil reached a new agreement, making the U.S. firm its main partner for the Natuna gas fields.

The Natuna fields contain massive natural gas reserves, a potentially lucrative development that could feed the growing economies of the region. But the area is also fraught with geopolitical tension, as the Chinese government has claimed an overlapping area of the South China Sea. China has increasingly focused its military buildup in the region in part to gain access to oil and gas fields.

Tillerson, during his confirmation hearings last week, sharply condemned China’s recent move to build artificial islands in the South China Sea, comparing it to “Russia’s taking of Crimea.” He added that, “we’re going to have to send China a clear signal that, first, the island-building stops and second, your access to those islands also is not going to be allowed.”

Tillerson’s aggressive posture toward China — one that risks open conflict — highlights how decisions he makes could be influenced by Exxon Mobil’s drilling interests in the South China Sea. The firm not only maintains a relationship with Indonesia, but also signed an agreement with a Vietnamese state-owned firm for a drilling concern in a disputed area of the South China Sea.

In his ethics letter sent to officials earlier this month, Tillerson wrote that he would not participate in any significant decisions relating to Exxon Mobil for a period of one year.

Sen. Ed Markey, D-Mass., however, said such a short exclusion period is insufficient during his confirmation hearing on Thursday. “You could be secretary of state for four years, or for eight years,” said Markey. “You, in my opinion, are going to have many, many issues after that one year period is up that relates to the economic interests of Exxon Mobil.”

Though Exxon Mobil’s worldwide drilling operations and issues around recusal were discussed repeatedly during the confirmation hearings, the State Department’s own direct involvement with Exxon Mobil was not mentioned.

Top photo: Protesters hold a placard with the words “Stop Fracking” during a demonstration near Langeneck, Germany, in February 2011.