The Trump administration is loosening restrictions on military cooperation with Bahrain despite its repression, and this may ultimately lead to more regional instability. On the morning of March 14th, 2011, military forces from the Gulf Cooperation Council (GCC) crossed the 16-mile causeway from Saudi Arabia to Bahrain to crush a popular uprising that had arisen there against the Bahraini monarchy. The military intervention was the first salvo in a series of counterrevolutions launched against the Arab Spring uprisings, pitting largely unarmed democracy activists against the repressive force of local security forces and militaries. Six years later, many of the Bahraini civil society leaders whose protests briefly captured the world’s imagination languish in prison, their brief democratic moment snuffed out with the help of regional powers.

Under Barack Obama, the United States stood by quietly while its GCC allies suppressed the Bahraini revolution. Since taking office, the Trump administration has signaled it will strengthen U.S.-Bahrain ties, recently lifting human rights restrictions on arms sales to its government to clear the path for a multi-billion dollar sale of F-16s. Such measures are likely to be taken by the regime as a green-light to escalate repression, while dimming hopes for the release of the estimated 4,000 political prisoners still held in Bahraini prisons, some analysts say.

But while the regime portrays itself to the United States as a bulwark of regional stability, the grim ferocity of its crackdown might make escalated conflict within Bahrain inevitable — and potentially even draw in outside powers like Iran. As the window for political reform closes under the Trump administration, an increasingly violent, unstable future may await Bahrain and the Gulf region as a whole.

“One way that the Trump administration is seeking to differentiate itself from its predecessor is by lowering any public criticism of human rights violations and repression in the Gulf States,” says Cole Bockenfeld, Deputy Director for Policy at the Project on Middle East Democracy. “Obama identified arms sales as a point of U.S. leverage in the Gulf and attempted to use them to exert some controls over human rights violations, whereas Trump is clearly de-linking human rights conditions from future sales.”

The suppression of the majority-Shia opposition by Bahrain’s Sunni-led monarchy has been framed by some analysts as another theater in a regional sectarian proxy war between Iran and the Gulf Arab states. The Bahraini regime has encouraged this framing, portraying itself as the only protector of the minority Sunni population against what it describes as “terrorists” backed by Iran. Its response to the 2011 uprising deliberately inflamed sectarian tensions, targeting ancient Shia mosques for demolition in what many believe was an effort to divide the opposition along religious lines. 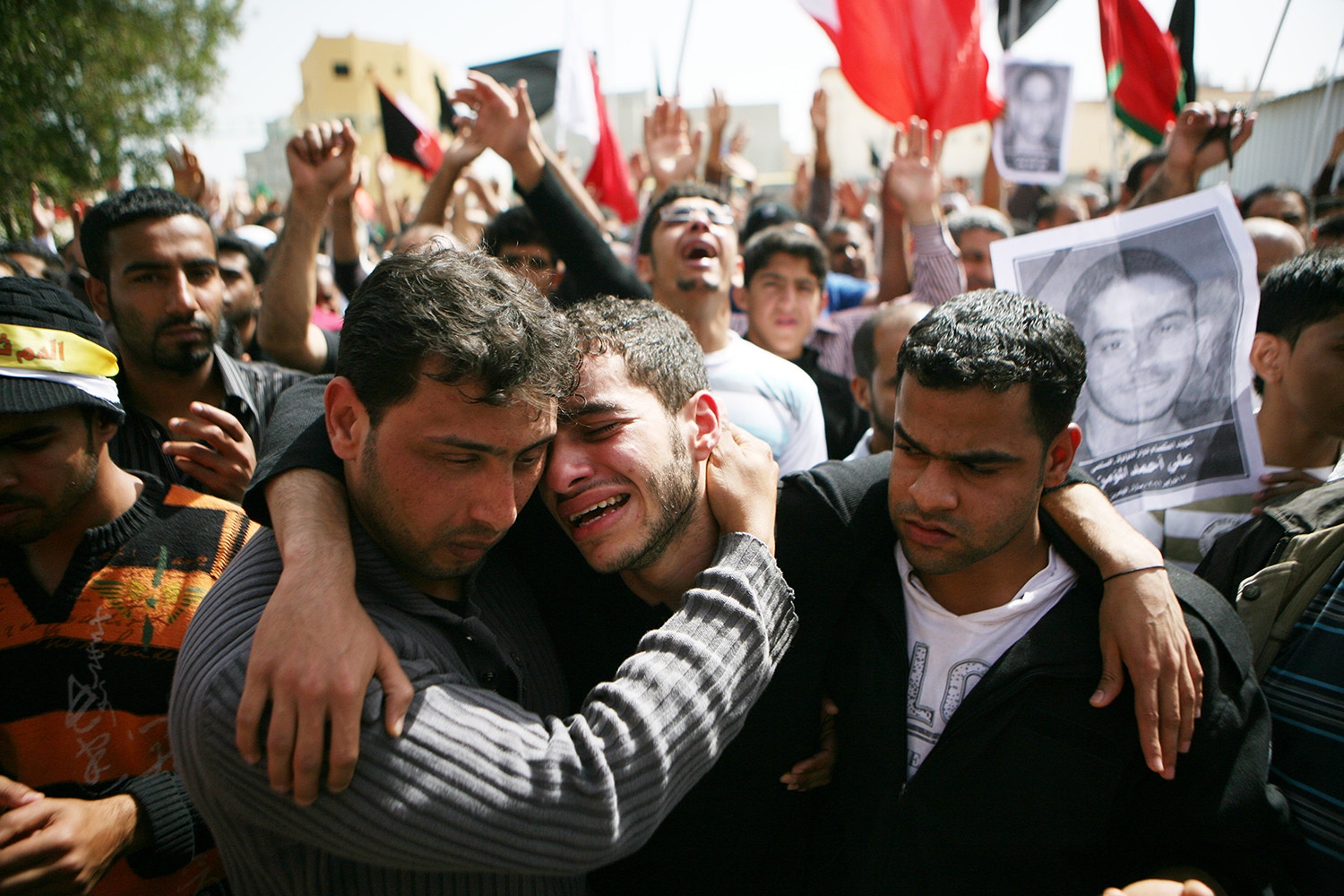 “It was both Sunnis and Shias that rose up against the government in Bahrain, but the Shias have been disproportionally targeted for reprisals, with the government demolishing dozens of their mosques in an effort to transform the revolution into a purely sectarian issue,” says Bockenfeld. “The regime in Bahrain has been using the same line describing the opposition as Iranian-backed terrorists for years, but the reality is that it has always been facing a homegrown movement for democracy and human rights.”

Bockenfield also fears that the regime’s repression, coupled with increasing international acceptance of its rule, could lead to an escalation towards violence in the foreseeable future. “As we’ve seen in so many other countries, if all peaceful opposition is crushed, disorganized and frustrated youth will likely start seeing violence as the only option left,” he says.

Over the past several months, a rising number of journalists and activists have been killed in Bahrain, either in encounters with security forces or mysterious shootings that many activists have blamed on the regime. Earlier this year three men were executed by the government after being convicted of killing three Bahraini police officers, in a trial that was widely viewed as unfair. Last week the ruling government approved measures that would allow trying civilians in Bahrain in military courts, a step that will do little to assuage concerns about a justice system widely viewed as brutal and corrupt.

The U.S. government has remained muted about this intensifying repression, while signaling its intention to work more closely with Gulf Arab countries. For their part, Bahraini leaders have expressed enthusiasm for Trump’s presidency, with Foreign Minister Ahmed al-Khalifa telling Reuters in an interview last week that Trump’s election proves that “things are working in America.”

These developments put democratic activists in Bahrain in a desperate position. With the United States and other Western countries heavily arming local security forces and dropping any pretensions of concern about human rights, some feel that they have nowhere to turn. While the United States initially expressed support for the 2011 uprising in Bahrain, there is a growing sense that it has now betrayed the same people whose aspirations it once encouraged.

“Among many Bahrainis, there is a feeling that the West has enabled and supported the government crackdown, and the United States and United Kingdom are now widely equated with the regime itself,” says Maryam al-Khawaja, a prominent Bahraini activist leader, whose father is among the thousands now held in Bahraini prisons. This week her father, Abdulhadi al-Khawaja, began a hunger strike in protest of his detention, one of several that he has undertaken since being sentenced to life in prison in 2011. “After the protests started in 2011, the ruling family reached a point where they could no longer control the situation and had to choose between reform or ruling with an iron fist,” she says. “Because of the support they’ve received, they’ve been able to do the latter.”

Reached for comment, a State Department official said that they can not yet comment on the recent U.S. arms sales to Bahrain, but added that on a broader policy level “this Administration has made it clear that it will strengthen its partners.” The official also told The Intercept that the U.S. continues to urge the Bahraini government to “promote reconciliation [and] advance reform efforts,” adding that the targeting of human rights activists in the country, “run[s] counter to Bahrain’s long term security and our mutual interests in regional stability.”

But six years after the original 2011 uprising, many Bahrainis have become disillusioned with such assurances from the United States. al-Khawaja in particular fears that the desperation felt by many in the country could turn violent, as activists are both terrorized by the government and denied any avenue for political change. “As a non-violent activist I would never condone anyone taking up arms, but at the same time you have to understand that when people are oppressed and offered no hope, they will seek to defend themselves,” she says. “The world reserves the term ‘terrorist’ only for people in the opposition, but it is the government here that has been inflicting more violence than anyone.”

Shortly after a Saudi state visit to the United States this March, the State Department designated a number of Bahraini citizens as terrorists, accusing them of having ties to the Iranian Revolutionary Guard Corps. While there is little evidence of widespread Iranian military support for the opposition — which has mostly employed non-violence and whose religious ties are closer to Iraqi Shia groups — escalating repression could end up create an opening for Iran’s involvement. A report earlier this month in the Washington Post cited U.S. intelligence officials who claimed that Iran had begun to provide sophisticated weapons and training to militants in Bahrain seeking to challenge the government.

“For Iran, Bahrain serves as a way to talk about U.S. double-standards and hypocrisy,” says al-Khawaja. By embracing the regime, the Trump administration “is going to create a self-fulfilling prophecy regarding Iranian influence, because Shia communities there will feel like the only protector they have left is Iran and Hezbollah.”

Bahrain is home to the U.S. Navy’s Fifth Fleet, making it a key staging point for U.S. military operations in the Gulf. The United States thus has a logical interest in preventing violent unrest in Bahrain, above and beyond its stated commitment to promoting democracy in the region.

But rather than security or stability, some argue that the Trump administration’s goals in the Gulf are primarily economic — and that the White House is willing to pursue short-term economic gain even at the expense of American strategic interests. The GCC states are among the biggest consumers of American arms, with Saudi Arabia alone purchasing more than $100 billion worth of arms under the Obama administration, including weaponry that has been used to commit likely war crimes in Yemen. This March, Amnesty International called on Trump to halt pending deals with Saudi Arabia and Bahrain, saying that weapons sales to these regimes “could implicate [Trump’s] administration in war crimes or violations of international humanitarian law.”

Husain Abdulla, executive director of the advocacy group Americans for Democracy and Human Rights in Bahrain, is among those who believe that the Trump administration is putting economic considerations above human rights, or even American strategic interests.

“The Trump’s administration’s position towards the Gulf is primarily that of a savvy businessperson looking to sell its products in a lucrative market. So from this perspective, it doesn’t matter what bad things happen as a result of their relationships in the Gulf,” he says. “If Trump cuts deals that help the American economy in the short-term, he can put himself in a position to be reelected in four years time.”

Abdulla fears that the situation in the Gulf will only deteriorate. Without an avenue for democratic change, popular discontent may lead to a period of violent upheaval that threatens the stability of Bahrain, as well as the broader GCC region. In recent years, violent intolerance of political opposition by rulers in the Middle East has led to major conflicts in Libya and Syria. While Bahrain’s population is smaller and easier to control, Abdulla says the regime cannot count on repression solving its problems indefinitely.

“Regime hardliners in Bahrain are already viewing Trump’s moves as a green-light for repression and acting on that, but their actions are simply heightening the pressures within Bahraini society, not bringing stability,” Abdulla says. “When you crush people who are simply calling for democracy and reform, you put them on the margins and embolden those who may actually be a threat.”

“I fear that without a change of course, we will end up with an explosive situation in Bahrain that does not serve American interests, nor the interests of the people of the GCC,” he says.

Top photo: A Bahraini man walks past portraits of men reportedly detained after attending anti-government protests, displayed behind a mosque in the village of Diraz, west of Manama, on July 10, 2015.